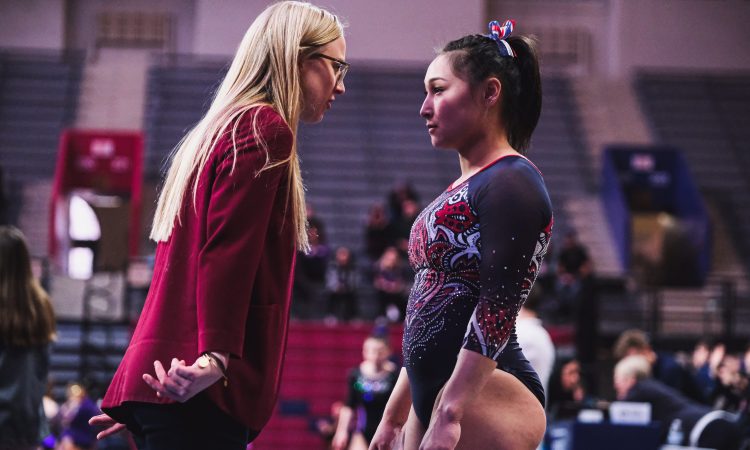 March 10th, 2019 was a monumental day for Penn’s gymnastics program; on the road at Maryland, the Quakers shattered the program record with a 195.075. The day remains in Kirsten Becker’s memory as one of the proudest moments in her tenure with the program—as both a gymnast and coach.

“It was a turning point,” she said. “We had a couple ups and downs in 2019, but hitting the record was a fulfilling moment for the team that they never stopped working for. I feel like that set us up for success in 2020 and beyond.”

Becker, an assistant coach at the time, has a unique new perspective on what will come beyond 2020 for the Quakers; she was just tapped to replace John Ceralde as head coach of the team. Promoted from the position she held for five years, Becker inherits a program whose season being cut short was especially tragic given the momentum it was gaining.

Becker’s association with the program began when she arrived on campus as a gymnast in 2009. She was drawn to Penn for the same reason she seeks to recruit student-athletes there now.

“It’s a great place for student-athletes who have invested in both those things; athletics and academics,” she said. “At Penn, you can reward that hard work, and the sky is the limit.” An accomplished student-athlete with the Quakers, to say that Becker (then Strausbaugh) tested that statement is an understatement. She was a USAG national bars champion, NCAA regional qualifier and ECAC gymnast of the year.

She went on to work in marketing and coach gymnastics on the side, but soon realized her passion for the latter called for a career change. “I always felt like there was something missing,” she said. “I soon realized that coaching was where my heart lied and that was when I made the leap. My husband [Penn football assistant coach Ryan Becker] is also a coach and seeing him go after his dreams was really motivating for me, too.”

Transitioning to a new coaching role is challenging at any time, but now is especially difficult given the pandemic’s displacement of student-athletes to their homes across the country. Nonetheless, Becker says her strong pre-existing relationships with the team ensured that the transition would go well. “I know all the members of the team and how hard working, caring and kind they are,” she said. “I feel like they bring out the best in me, and I’m excited to continue working with them.”

Working with them thus far has included conducting virtual team meetings and meetings with individual classes. Becker acknowledges that every student-athlete is feeling the effects of the pandemic and cancelled season in different ways, and her attempts to work through those issues directly correlates with her coaching philosophy.

Becker credits the athletic department’s investment in the gymnastics program over her tenure as gymnast and coach as evidence that the team is able to rise to the occasion and compete in a league with new standards. “The talent in the Ivy League and the ECAC has drastically improved,” she said. We had a really successful team when I was at Penn, but we won with a 192 and that doesn’t happen anymore.” Becker should know: The 2020 season for Penn culminated in a 194.850, good enough for a win at the Ivy Classic. It was the program’s first since 2015.

“There were obstacles along the way,” Becker said. “But they never backed down and did it all together. There was no pointing of fingers, we just moved on.” It’s clear that the team will need to take on this same mindset to navigate the coronavirus crisis and the uncertainty it brings, but with Becker at the helm, it seems capable of rising to the challenge.