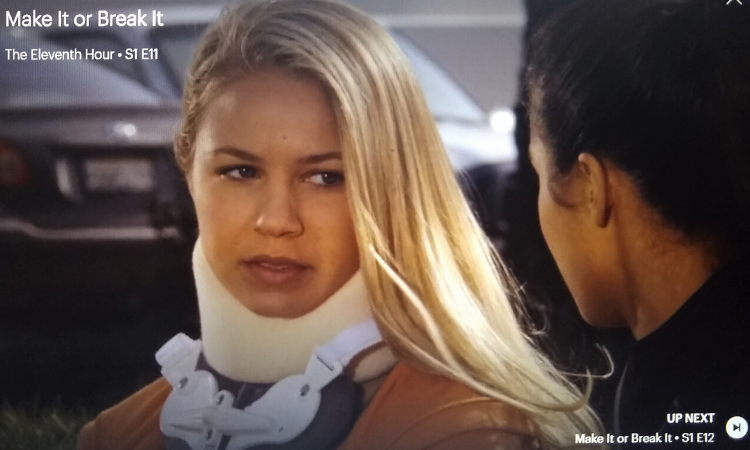 Nationals are over and the team (minus a seriously injured Payson) is back at The Rock. Lauren notes, “I heard she can’t even walk… Tragic. We should do a telethon.” OMG, REMEMBER TELETHONS?!

Emily and Kaylie are quick to point out that she can walk, she just can’t do gymnastics.

Well snap! Right on cue, Payson strolls in wearing a leo and grips. According to her, “It’s just a muscle strain. The doctors were wrong.”

Obviously, Sasha just takes her word for it, and urges her to get on the bars to conquer both her fears and her recent SPINAL CORD INJURY. She does, sticks the landing and is immediately mobbed by the team. 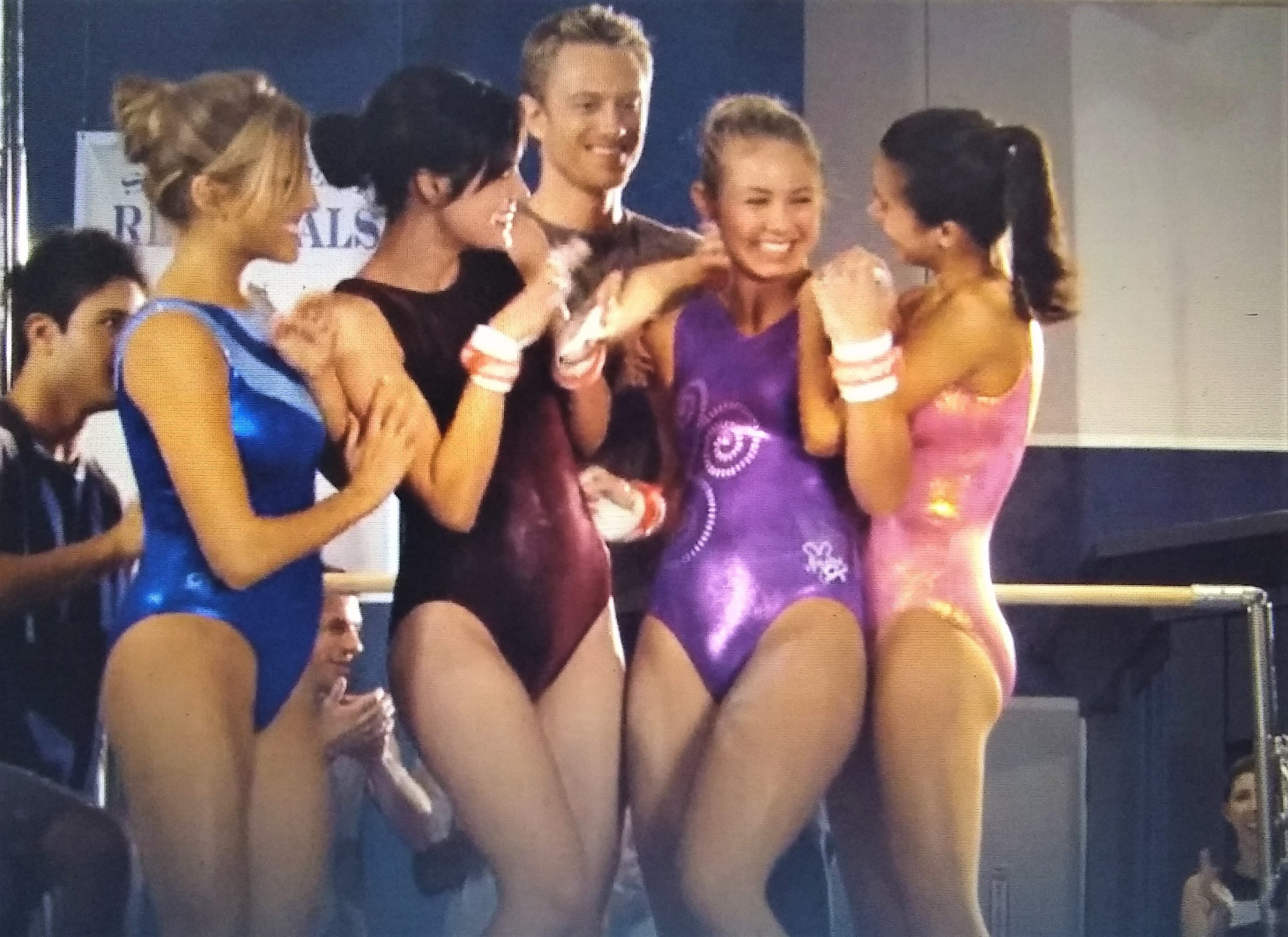 OK, good, that whole sequence was a dream. Payson is actually lying in her very soft, comfy, pillow-laden bed wearing a cervical thoracic orthosis; this is slightly more realistic than her being able to do a bars routine in this condition, but only just. Gotta say, her cupcake PJs are super cute, though… 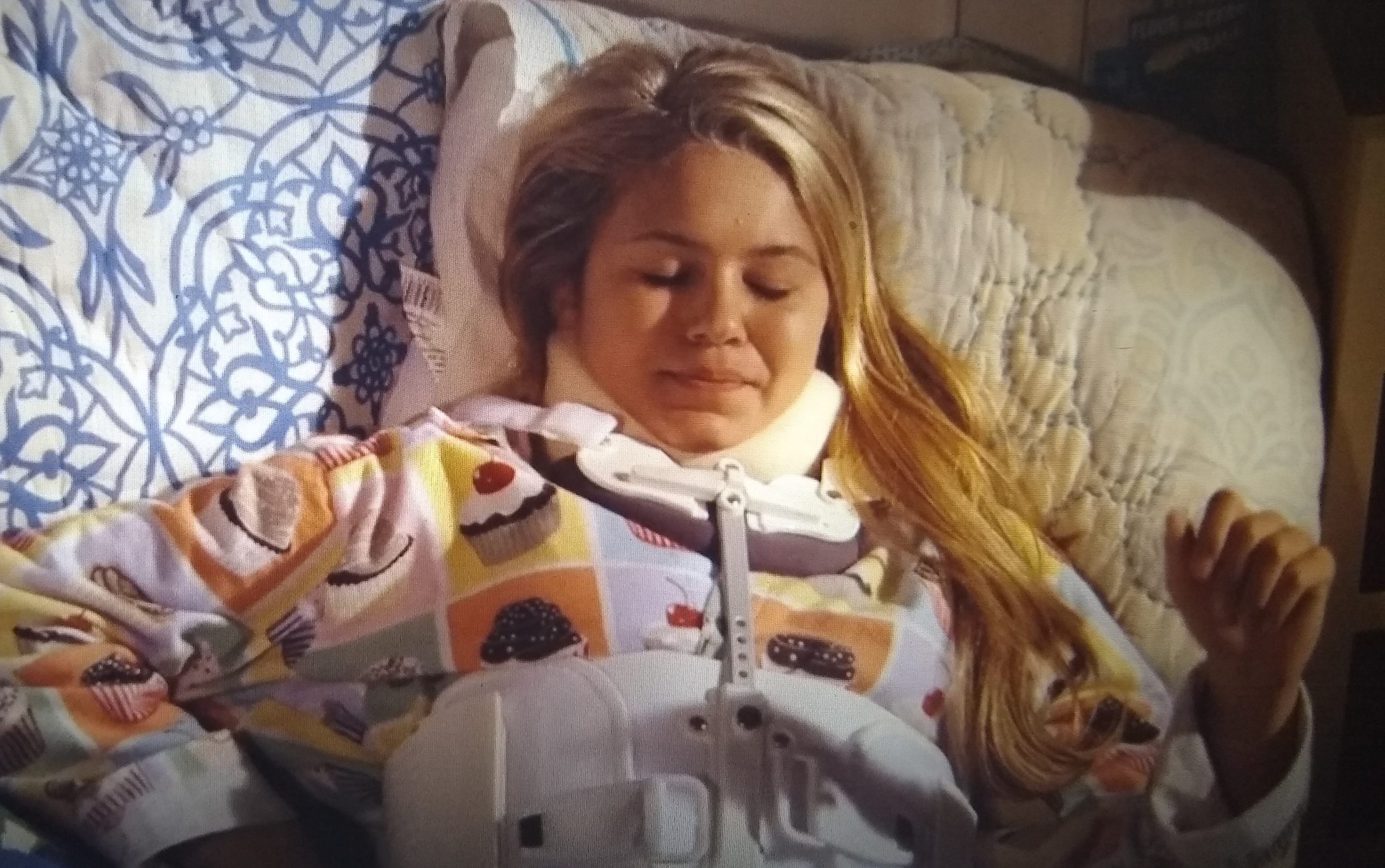 “You don’t think that physical therapist is pushing her too hard, do you?” Payson’s parents are unloading groceries and discussing her current situation. Kim thinks her upbeat, “Everything is awesome!” attitude is some nonsense (I agree). Dad asks, “Is it so hard to believe we raised a well-adjusted child who’s able to deal with adversity?”

Oh hey, Payson’s sister is back! I thought she got Judy Winslowed a few episodes back. Anyway, the city of Boulder is hosting a televised celebratory parade for the team’s performance at nationals, and she wants to watch. Kim protests, but Payson assures her that it’s fine. There are enough Rock-based puns at the event to make Olly Hogben himself raise an eyebrow. 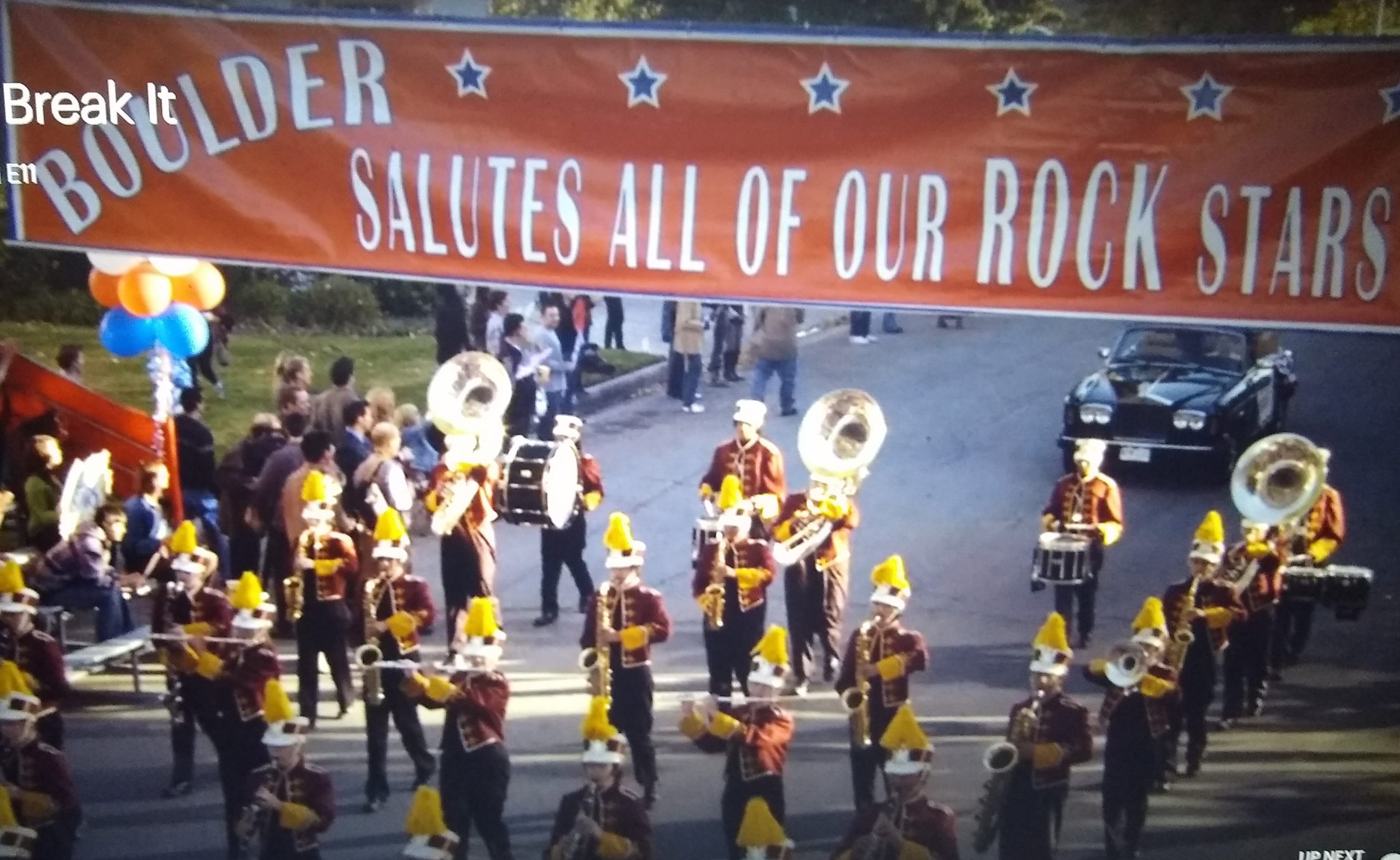 After the parade, Kaylie gets a big ass gold key to the city of Boulder from the mayor… And none for Carter, ha! 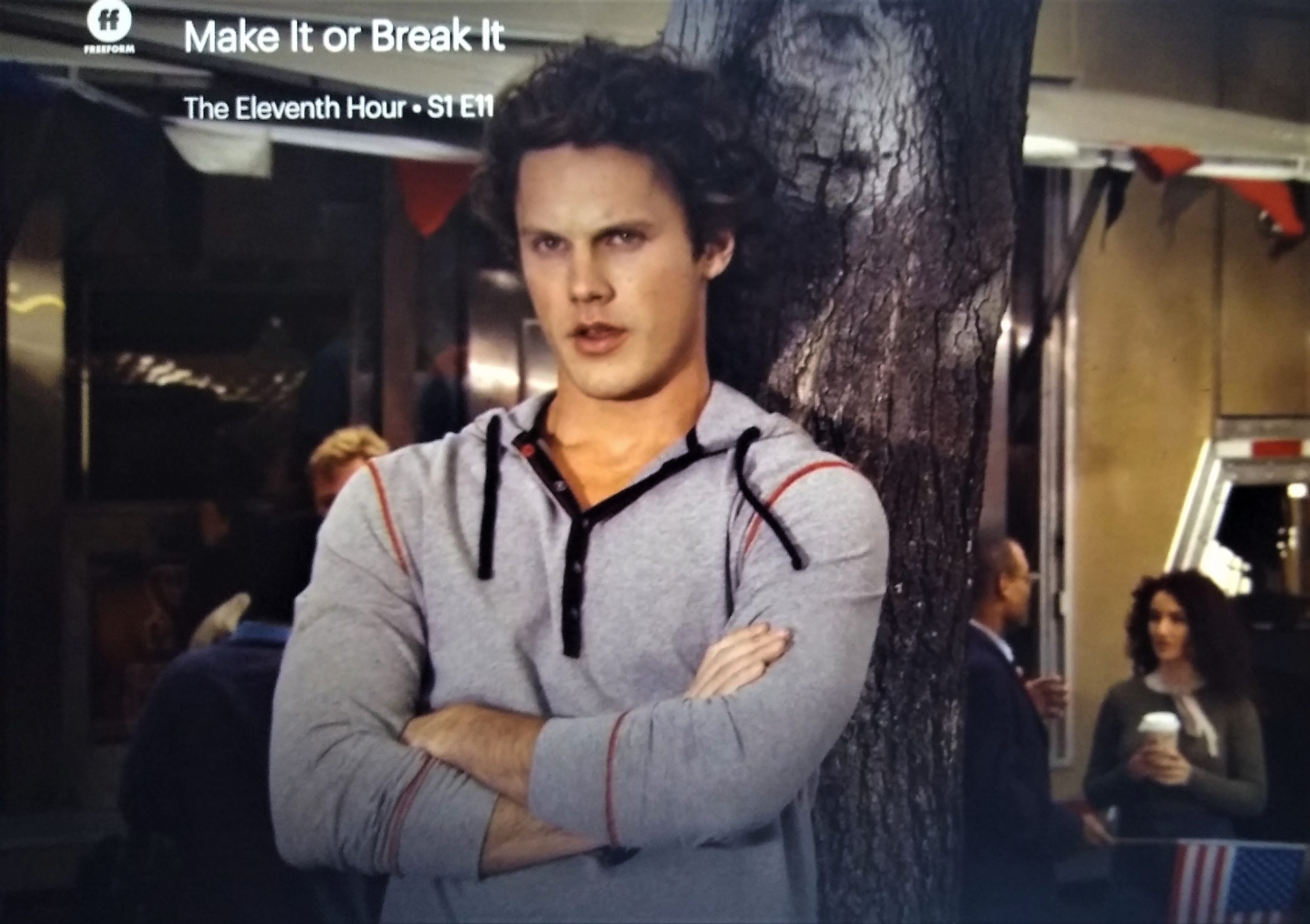 Kaylie is giving a nice little speech where she gets Kanyed by Lauren, who just has to make a totally sincere and not at all self-serving monologue about Payson.

Lauren tries to cozying up to persona non grata Carter who tells her to GTFO while national silver-medalist and erstwhile cortisone dealer Nick shades Kaylie for not being as Focused™ as Payson.

Meanwhile, Kaylie’s new agent is hustling and won’t let her just enjoy “Kaylie Cruz Day” because in this fabulously gymnastics-centric alternate universe, she’s now a sports superstar and her life is no longer her own. (I’m on Episode IX of The Last Dance; can confirm this is how sports works.)

The girls are smiling and signing autographs while discussing how much they dislike one another when Carter comes over and offers some platitudes. Afterwards, Kaylie says she’s fine and glad that he’s been booted from The Rock so she can focus on winning Olympic gold. Lauren agrees, saying she doesn’t want any more drama because she hates drama… Skeptical Emily is skeptical. 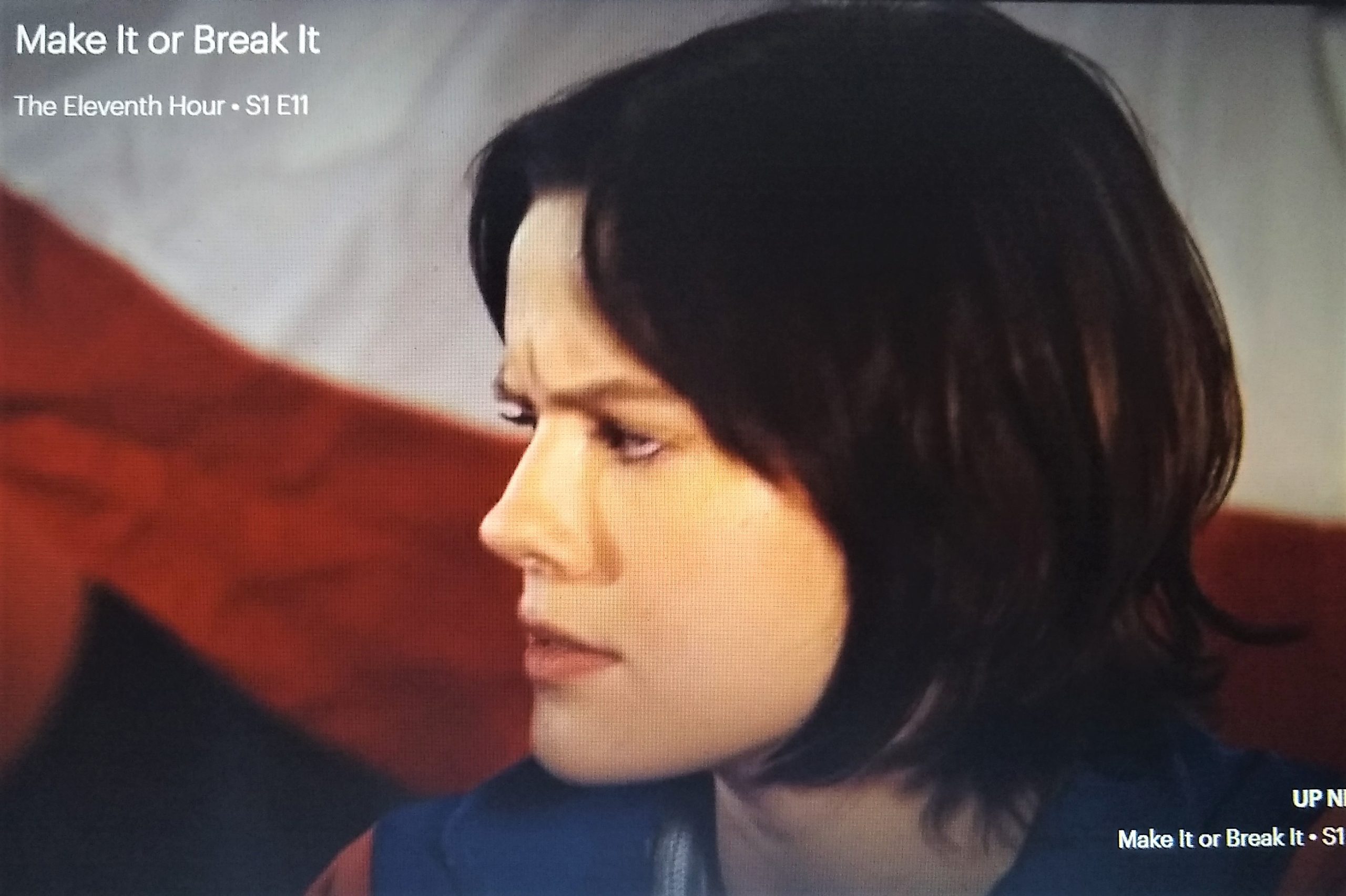 Back at the Keelers’, Payson suggests they move back to Minnesota since they only moved to Boulder so she could train at The Rock. Her parents try to explain that it’s a little more complicated than that, but Payson insists, “No it isn’t! We should move back.” (Her sister and junior elite gymnast Becca says hi!) 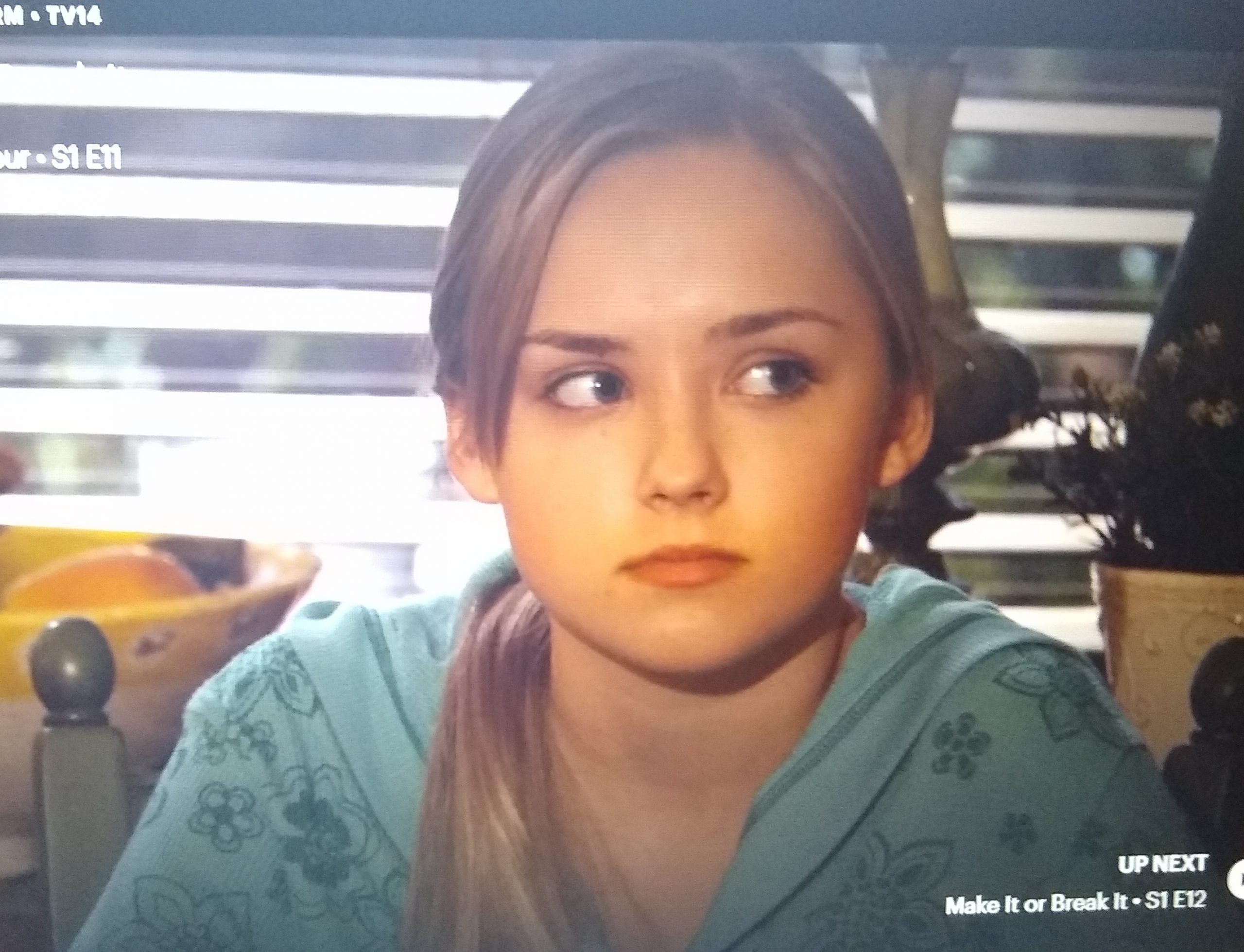 That boy Emily finally made out with comes to congratulate her and they sneak away so Sasha doesn’t see them. When she says this experience is beyond her wildest dreams, he tells her to dream bigger.

Lauren’s being weirdly nice to Summer, and I don’t trust it. She tells Summer that she’s motivated to become No. 1 through hard work and determination and that she’s super-inspired by her best friend Kaylie. As soon as Summer is distracted, Lauren goes and tells Sasha there’s something he should know about Carter.

Chloe and Emily show up at the Keelers’ house unannounced and uninvited, but they brought a potato chip casserole, so it’s cool. (FYI, MIOBI is part of the Let’s Potato Chips-verse, so that’s fun!) 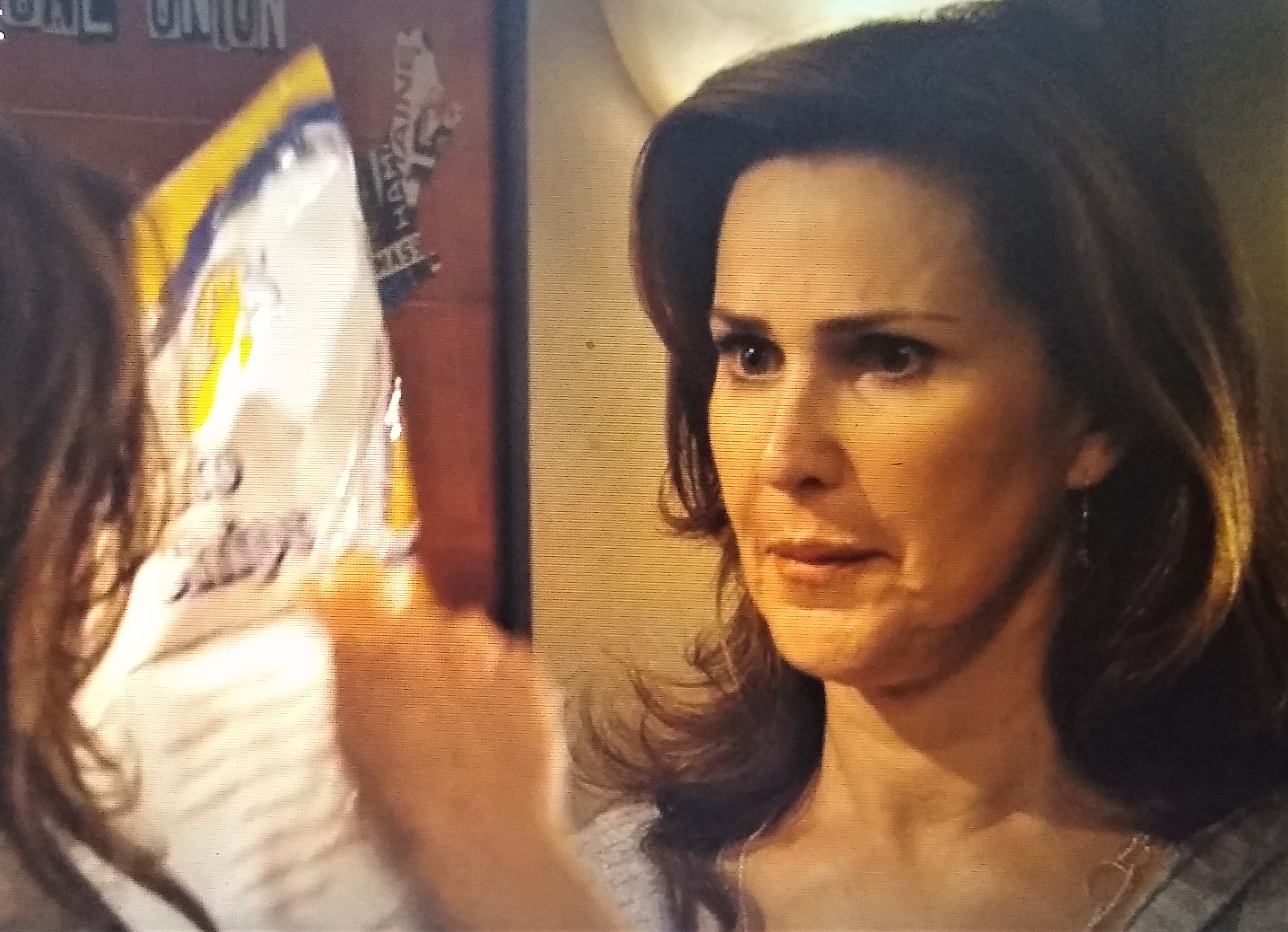 In a moment of uncharacteristic self-awareness and altruism, Chloe notes that she knows she’s intruding, but that people/families often isolate themselves after a trauma and she wanted to make sure they were OK. In a reversal of roles, Kim utterly sticks her foot in her mouth by saying, “It could have been so much worse, she could have wound up in a wheelchair…” Ya know, like Chloe’s son Brian. Chloe is shockingly gracious and moves past the awkward, offering support and empathy.

Emily visits with Payson, who has inexplicably removed her cervical collar. JFC… Not that that foam nonsense was doing much, but still. Emily brought playing cards so they don’t have to talk (it was a much sweeter gesture than I’m making it out to be).

Next, Nicky goes to visit Payson. He’s shocked (and maybe a little disappointed?) that she’s seemingly handling things so well. Lauren eavesdrops on the two discussing Nicky forging a cortisone prescription for Payson (even though she didn’t use it). She also conveniently overhears that it’s being kept in Payson’s gym locker as well as the combination to said locker.

Back at The Rock, Sasha and MJ are debating whether or not Kaylie’s allowed to have a day off while Lauren and Kaylie are trash-talking each other during beam run-throughs. Carter walks in, and Sasha tells him he’s lifting Carter’s suspension because his girlfriend (whose name never comes up) intervened on his behalf. Carter thanks Kaylie, who has absolutely no idea what he’s talking about. Lauren then gets to swoop in and be the hero because, “It was the right thing to do for Carter. Besides, I’m the one who actually slept with him. ”

And now Kaylie gets to go do a live interview with a journalist who would make even Al Trautwig say, “Boundaries, bro…” It’s exactly as awkward as you’d expect, culminating in her walking out mid-question. Lauren looks pleased. 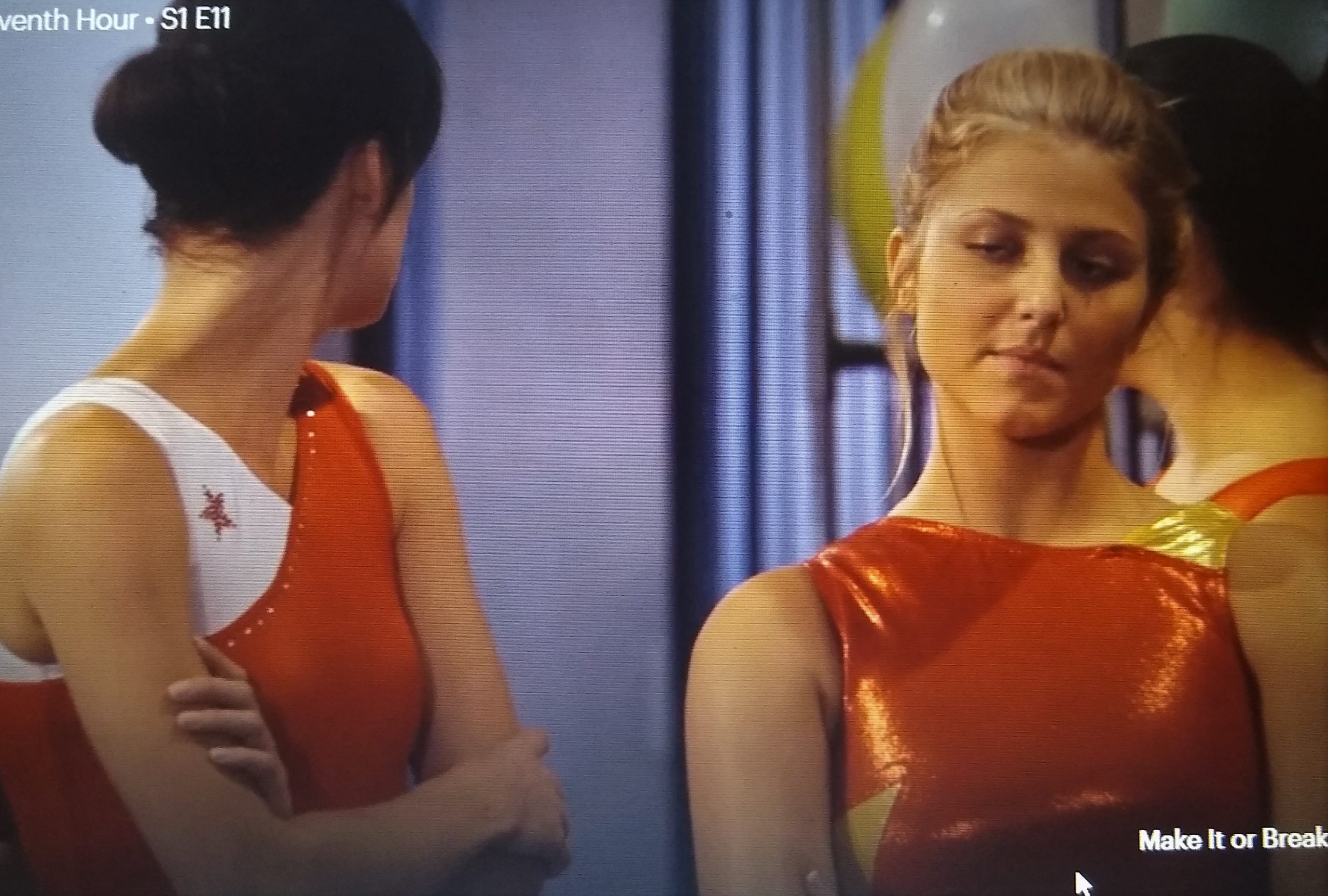 After getting brutally guilt tripped by the interviewer, Kaylie finally goes to visit Payson—who once again has super cute PJs (puppies and polka dots)—and breaks down, confessing that Payson should have won nationals and that she’s terrified of letting everyone down. She asks Payson for her support, and Payson’s like, “I’ve got a few other things on my mind right now!”

Upon seeing Kaylie leave in tears, Mark gives Payson a pep talk about being a champion while also understanding, “Life isn’t a competition… It’s OK to feel everything and let it out.”  OK, Boomer… 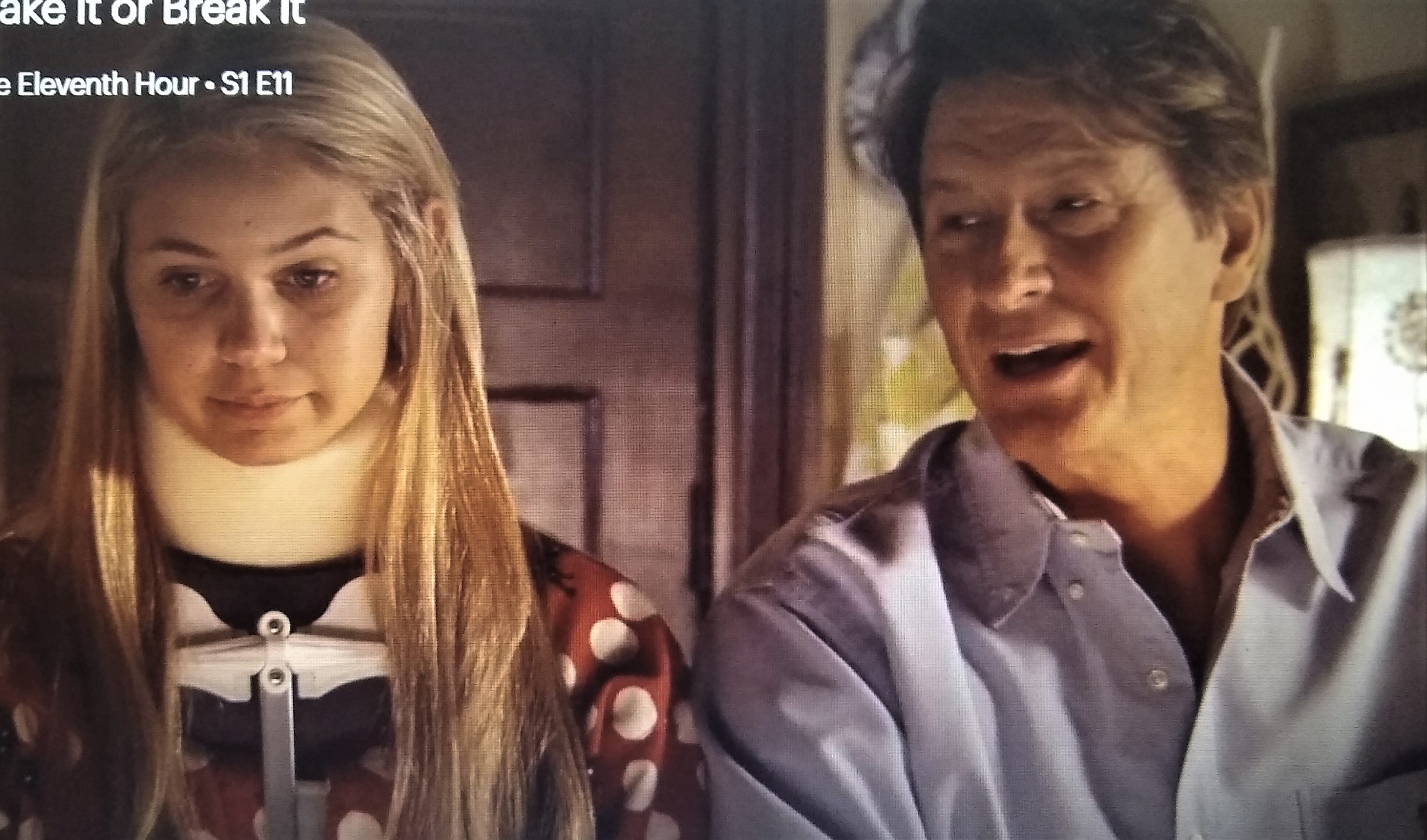 Meanwhile, Emily shows up at the Pizza Shack for Damon’s sexy surprise. He’s set up a romantic “Starlight Lounge” on the roof. She says it’s one of the coolest things anyone’s ever done for her. More kissing. Then, they have a heart-to-heart about being driven people and chasing their dreams and relationship expectations… Enter Razor, who says, “Wow! This is weird… Anyway, I’ll be here with Emily while you’re in LA. Later!”

The Keelers, including Ju—I mean, Becca, are awoken by Payson smashing and tearing apart everything in her room. Mark insists they let her do it, which I think is good advice. The next morning, Payson and Kim have a follow-up heart-to-heart about how she’s “a champion at life” and how much she still has going for her.  Bless, that’s such a mom answer!

Heeey, Carter is back at The Rock and immediately asks Kaylie if she’s cool with him being back. He also tells Lauren, “I guess I should thank you, but I guess you’ll understand if I don’t…”

Emily is bummed that Damon is leaving and things between them ended so awkwardly. Again, Chloe musters an astonishing level of empathy and tells her to fix it, make sure Damon knows there’s nothing “sparky sparky” going on with her and Razor. (Her words, not mine.)

While Summer and Kim chat about boring grown-up stuff, Payson shows up at The Rock to thunderous applause and hugs, echoing her dream. Maybe it’s the glass of wine I poured to get over Kaylie’s cringey interview, but that was genuinely sweet. 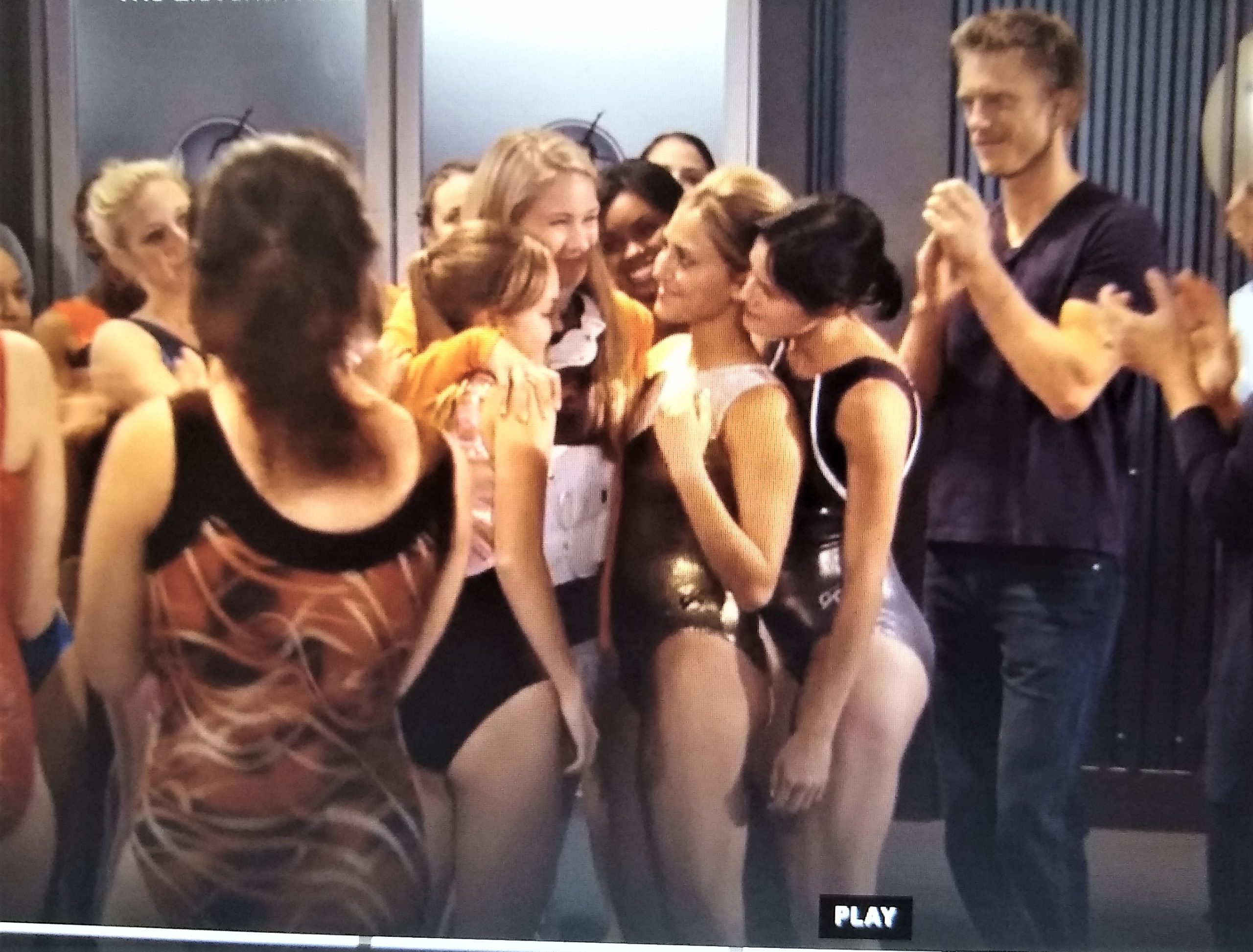 Kaylie and Payson go outside to talk and Payson rants about how utterly pissed off and jealous she is of Kaylie right now even though she knows it’s irrational, but ARGH! Kaylie tries to apologize, but Payson shuts her down: “Don’t you dare be sorry for winning… YOU beat Kelly Parker. Next time you doubt yourself, just remember that.” Damn, this is a really good scene. There’s a lot of nuance and complexity to this situation, and the writers and actors really nailed it.

It’s nighttime at The Rock. Nicky is opening Payson’s locker when he hears Lauren say, “It’s not in there.” DUN DUN DUN. He asks, “What do you want?” to which Lauren replies, “We’ll see.” 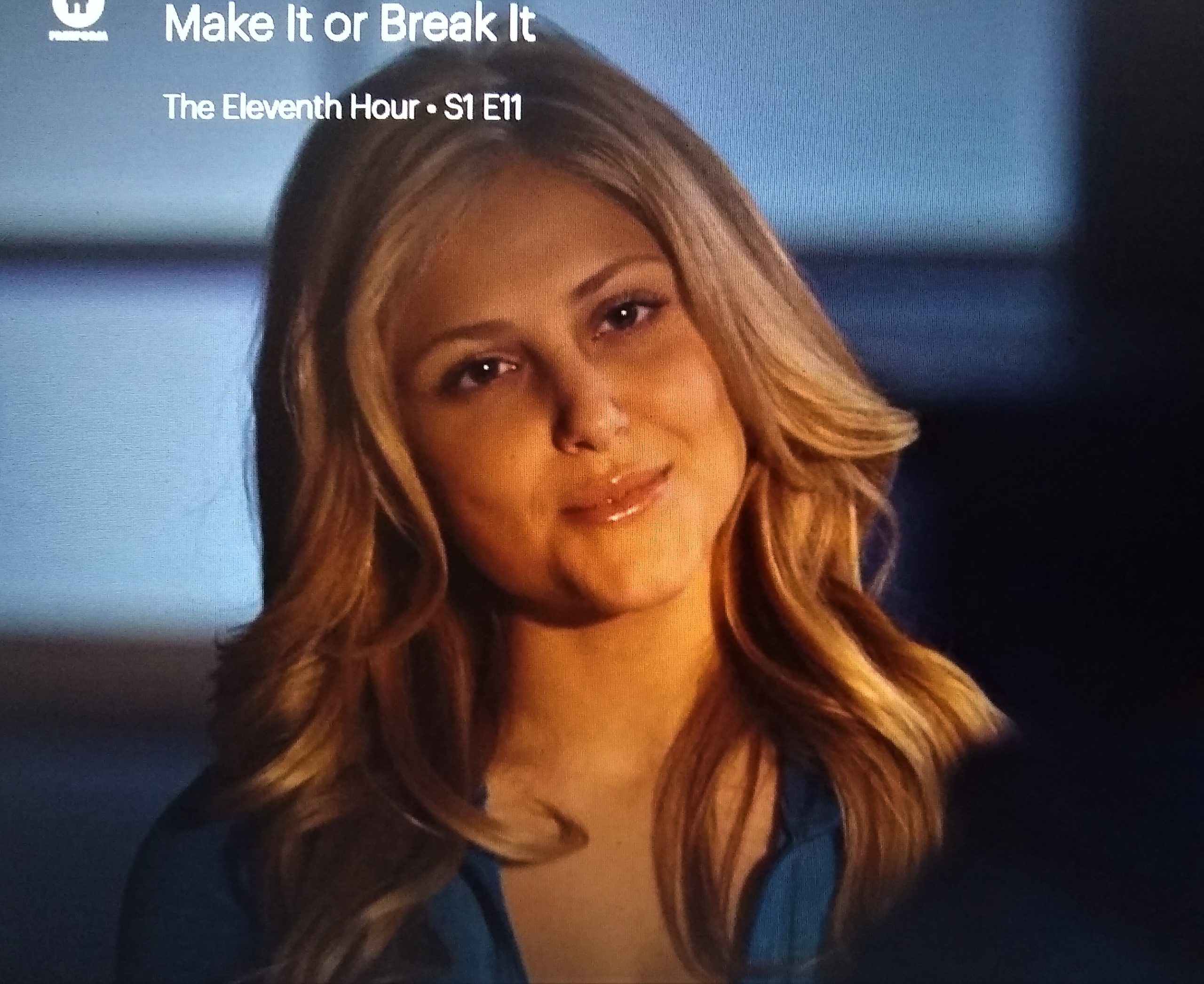 Emily shows up as Damon’s bus is about to leave and tells him she wants him to ask her to wait for him. He asks, she says yes and they smooch some more.

Realer Than Payson’s Little Sister Being an Afterthought

Episode 11 gets an 11, roughly the number of years in prison Nicky could be facing if he gets busted for forging a cortisone script. 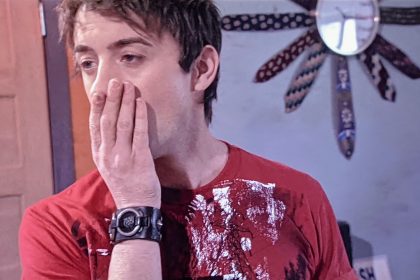