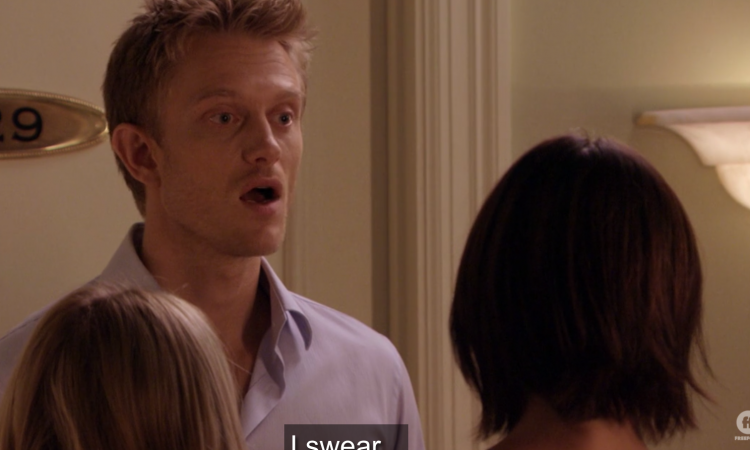 S1E10: All That Glitters

The team has arrived at the Boston competition venue, aka the black pyramid of Giza. I feel like this is what the Hunger Games arena looked like. 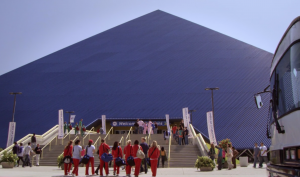 Continuing the dystopian trend, the girls are instantly greeted by a media corps that seems quite accurate compared to reality. 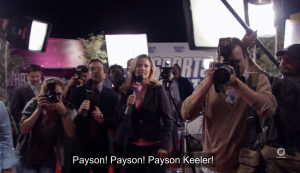 Bless these show runners for imagining gymnastics gets the attention worthy of the Grammy Awards. Now I’m imagining Ryan Seacrest asking gymnasts who did their leos and wondering who Sylvia P is.

Sensing shady storylines, the discount Ryan Seacrest of this show calls over Kelly Parker to stand alongside Payson while they talk trash on one another. I’d have lost it to see this happen with Simone and Morgan before 2018 Classic.

Payson sees her dad (Minnesota didn’t eat him alive!) and runs off. This look from Kelly suggests we’re getting a “I don’t have family” trauma storyline later…stay tuned. 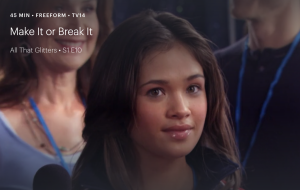 Brian, left at home because Joe didn’t foot the bill for him to go (I’m sure he’s devastated), gets a surprise visitor in the form of Damon. Apparently he IS sad enough to take Damon up on the offer to drive together to Boston on a hijacked tour bus so they don’t miss the competition. Remember that urban legend that Michael Jackson, Marlon Brando and Elizabeth Taylor drove out of New York together after 9/11? That’s what this crew reminds me of. 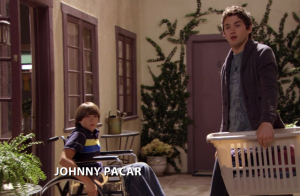 The girls get their room assignments and, as expected, have issues. Kaylie won’t room with Lauren, so it’s Emily’s privilege to get insulted by Lauren on her “dollar store luggage.” Sick burn, dude! Did you keep it in that ugly bag you were carrying last week? 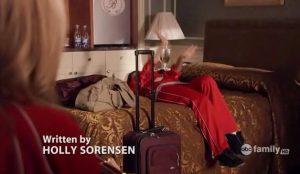 Clearly this experience is sending her into anaphylactic shock, which induces visions of her past failures and the immediate need to flee the room. Quite becoming behavior of a team captain, as Lauren notes.

Outside, Kaylie and her brother (def forgot he was a character) are walking, and we see that he’s facilitated a reunion between her and Carter. Wasn’t he threatening to break Carter’s neck a few episodes ago? I can’t keep track. Anyway, Kaylie’s not into it and rightly sends him away.

At the competition, we see the dramatic entryway they’ve dreamed up. 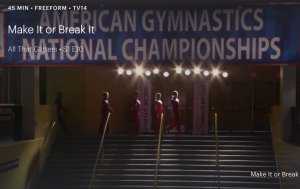 Sorry, but this is a Jennifer Lawrence falling moment waiting to happen.

Sasha has helpful advice for the girls as they get ready to compete: 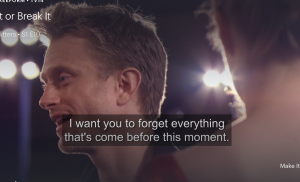 Remember when you learned your beam choreography? Or how to do a back handspring? Yeah, forget all that.

The ESPN commentators giggle about how hillbilly Emily used to train at the country bumpkin’s YWCA. She sure shows them, though, with a big…tucked full on vault.

Here’s a trend the show runners unfortunately got right. Can we not? 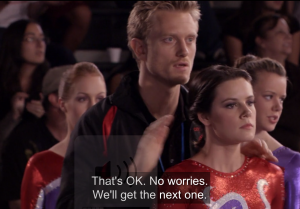 Payson does her part to scare the competition, and I don’t think I’ve ever been prouder of her. 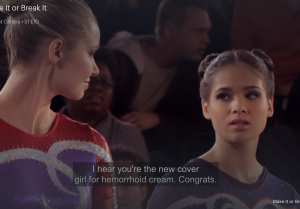 Why is that lowkey one of those random products I can see a gymnast shilling, though?

“Kaylie is one of those girls that knows how to entertain an audience.” With faces like this, how could someone possibly be bored? 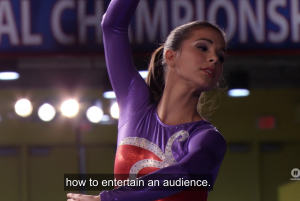 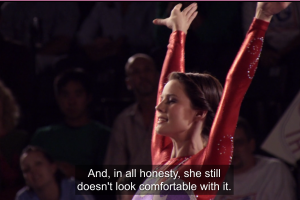 I wish you guys could hear this floor music. It sounds like what they’d play in a saloon scene in one of those low-budget Westerns from the ’50s. The commentators note that she “doesn’t look comfortable with it,” which is the nice way of saying:

She sucked so badly she’s in a lowly 20th for the day. That, along with the fact that a Rock gymnast isn’t in first, means that it’s clearly been a godawful trash day for the gym.

It’s also a godawful trash day for Lauren’s Daddy, who’s just been left by Summer because it turned out he threatened Lauren’s real mom not to come to the meet. She’s so pissed that she hits him with a “I hope you go to…[inaudible spitting and stuttering].” That’s basically the Good Christian Woman™️ equivalent of the witch’s curse in “Beauty and the Beast.”

The girls unwind at what looks like the banquet of the meet. At least I’m assuming so, given the girls’ attempt at formalwear. 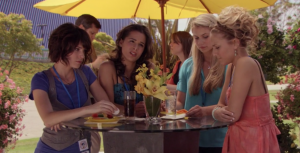 How did Lauren have time to get a wedding-style updo?

Lots of drama ensues, with Steve revealing to Lauren that Summer is gone and Kaylie’s dad basically confirming he only sees her success through a financial lens. Then, because men have been outdoing themselves this episode, Kelly Parker shows up and calls all the girls drug addicts and whores. But guess who swoops in to save the day? 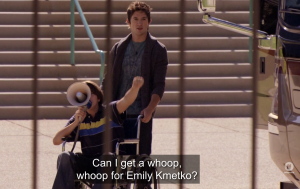 Later, Christian Grey—I mean Damon—thinks he knows what it takes to break Emily out of her funk. 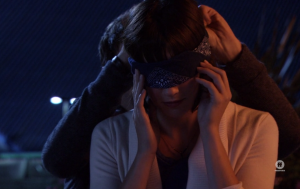 But really, why was that just in his pocket? For people who aren’t supposed to like each other, they sure seem to enjoy spending time together under the cover of darkness. Not sure what blindfolding her does to snap her out of it that closing her eyes can’t. By the way, still no kissing here. Has Emily been taking lessons from Summer?

Back in the hotel room, the girls brainstorm ways to get back at Kelly for her constant bitching. Good thing Lauren’s kleptomaniac tendencies kicked in… 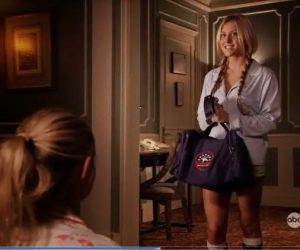 Armed with Kelly’s gym bag and the likely pounds of foundation and concealer within, the girls get out and seek revenge. Except then they run into Sasha and he’s all “BUT ARBITRARY CURFEW!” Emily makes up some BS excuse about needing tampons and Sasha reacts exactly as you’d expect a man would. 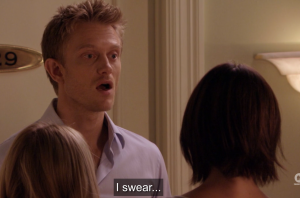 Kaylie and that British woman from a few episodes ago have a shadowy meeting, and Kaylie reveals she wants to transfer agent power from her hapless dad to this girl. But she basically says Kaylie’s worthless, the window has closed and she doesn’t “want it enough.” So, Agent Provocateur, she doesn’t want it as much as you want Sasha to pay attention to you after THAT window closed too?

Later, we find out what the girls did to get back at Kelly. Instead of the bag being filled with all that Very Important Gymnastics Supplies, it’s now filled with condoms and hair removal cream. Are personal hygiene and sexual health supposed to be a joke? I guess they also thought hormones make you bad at gymnastics, so I should remember who I’m dealing with.

On the Jumbotron, a familiar face passes by.

I thought they only let attractive people up on those things? Sasha’s probably up in the meet organizer’s face telling them to cut the electricity to the thing ASAP.

Kaylie beckons Carter down to the floor and my heart drops for a second. But she redeems herself and gives him back the necklace once and for all. SEE YA SUCKA! Her parents just see a rejection of any notion of romantic love and are equally pleased. 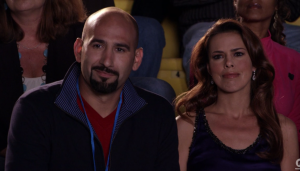 She shows her newly rekindled groove by earning a 16.2 for her vault. Lauren tries to do the same and shuffles back, which Sasha immediately rebukes as meaning she doesn’t care. If that were true, there’d be a whole lot of NCAA gymnasts who don’t give a rip.

Lauren decides she needs to phone a friend. Did you know Summer was a “friend” to her? Me either. But she berates her and asks how she could possibly leave when Lauren had been nothing but sweet and kind to her this entire time.

Guess what, though, she still came through and is there to support. What’s that Harry Potter quote about the ones we love coming back to us in the end? It’s like that, except switch out “the ones we love” for “the ones we tolerate because they’re the only ones who can stand us.”

Payson goes to the bathroom to pop a Cortisone shot when she sees Kelly doing the same thing.

Lauren does a great beam routine, obviously made greater by the fact that she smiles. Then Payson goes up on bars and has no such luck. She throws a Maloney and it doesn’t end well. 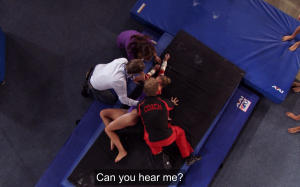 This is honestly about to be the next camera angle NBC uses to glorify a horrific fall.

Sasha tells the girls the only thing they can possibly do to rectify the whole Payson situation is be perfect and win all the things—it’s what she’d want! To do so, he instructs Emily to bring back her old floor routine, which is basically the dance scene from Napoleon Dynamite and a whip to…whip tumbling pass.

At the hospital, Payson learns she can never do gymnastics again at the risk of paralysis. But her teammates are all going to do well at the meet, so that makes it all better, right? Note that I’m not taking this seriously because it’s ABC Family, and I have no doubt that a Gymnastics Ex Machina will eventually come through to save the day.

Kaylie is the national all around champion after a floor routine that must have been super intense, since it was juxtaposed in a montage alongside Kelly Parker’s. Carter clutches the necklace she gave him back like a rosary because you better BELIEVE he has to repent for some sins. 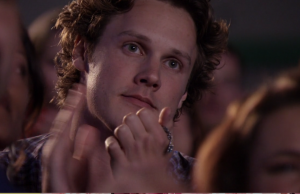 Emily squeaked in to earn the last spot on the team. But it wouldn’t be the misogynoir we know and love without disregarding this accomplishment and making her the center of a fight between two men: Kaylie’s brother (why is he still relevant?) and Damon, who’s definitely not here for “his” girl daring to LOOK at another man. Emily makes him forget about it by FINALLY kissing him, and again, it’s ABC Family, so it has to be in slow motion and super up close. I’ll spare you the screenshot.

Why does this version of USAG’s logo look like an insurance company? 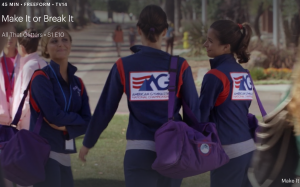 We end the episode with a rather emotional view of Emily, Kaylie and Lauren in Payson’s hospital room as they all hold hands. But of course it’s made decidedly less heartfelt with the blaring royalty free music in the background. And that’s curtains on the first half of the season!

Realer Than Straight Men Being Repulsed by Tampons

For its midseason finale, MIOBI earned the equivalent of Lauren’s place at nationals: a fabulous 4!