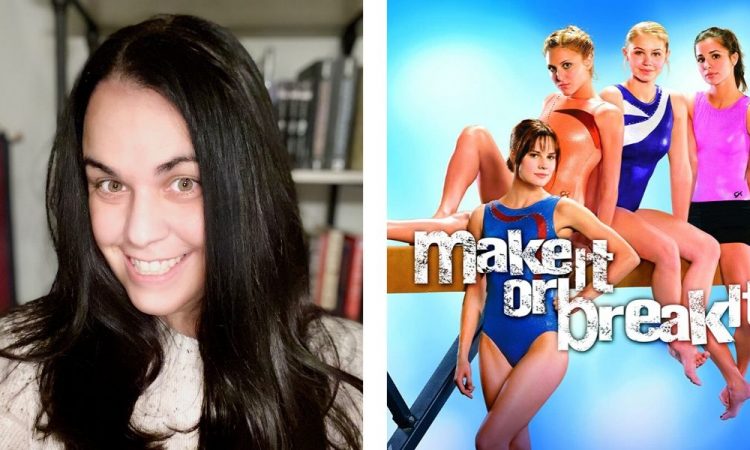 Jennifer Iacopelli’s recent book “Break the Fall” has been making the gymternet Goodreads rounds for some time now. Iacopelli has discussed the inspiration she got for the book from real life events in the sport, but what’s lesser known is the way the book and her other writing was influenced by gymnastics media like “Make It Or Break It.” We spoke with Iacopelli about the connection between the show and her writing, how it affected her life and what she thinks other gymnastics media could learn from it.

How and when did you first come across MIOBI, and what got you interested in the show?

I started watching MIOBI in the summer of 2009. I honestly had to go look up when it premiered because I couldn’t remember when I’d first picked it up, but it makes sense that it was over a summer since I would have been off from work! I was immediately drawn in by the concept of a TV show following four female athletes as they tried to accomplish their goals.

First, I loved the idea that the main characters had real, tangible goals on a TV show aimed at young women, and that those goals wouldn’t immediately disappear into a puff of smoke as the show went along. That would be impossible because the entire concept was centered on that goal. Then add to it that the goal was to become Olympic gymnasts and I was sold from the get go. Back then I was a “Four Year Fan,” but I’d been following Olympic gymnastics since 1996, so it was very much my thing.

Once I started watching, I think what kept me there was one character specifically: Payson Keeler. We didn’t deserve Payson Keeler, and I will never be convinced that she didn’t go to London and win all the medals. All the medals for Payson Keeler (and none for Kaylie Cruz—not sorry!), but I digress! It honestly felt like the show had been designed specifically for me, and if you ever want to do an interview just on Payson Keeler and how we need more Paysons in the world, I’m your girl!

As far as gymnastics media goes, what did MIOBI get right about gymnastics that other shows might not?

I think where MIOBI succeeds as far as the sport of gymnastics is concerned is that the general audience completely bought it as an accurate portrayal of elite level gymnastics. Their stunt doubles were real gymnasts doing real skills, and it was impressive to the untrained eye. I know that because I came to the show without a lot of technical expertise and the me of 2009 was honestly blown away by it. Obviously, I learned a lot since then, but they did a really nice job of putting real gymnasts and gymnastics front and center.

Looking back, I think they did an incredible job of portraying elite gymnastics without having access to the elite gymnasts capable of doing those skills to stunt in for the actors. I liked that they didn’t shy away from it. Most of the show takes place at the gym. It’s not like some shows where the characters who ostensibly attend high school are never actually at high school. MIOBI never allowed itself to become something it wasn’t. It was always a gymnastics show at its core.

You wrote your share of MIOBI fanfiction while the show was on. What is it about writing fanfiction that allows fans to connect with the show on a deeper level?

I wrote SO MUCH MIOBI fanfiction, but before any of you hunt around into the dusty corners of the internet to search for it, it’s long gone! I think when it was all said and done, I’d written over half a million words of MIOBI fanfic, and it was the popularity of those fics and positive feedback I received that convinced me I had enough talent to publish my own original work.

Fanfiction will always have such a special place in my heart. It’s a labor of love and a medium where writers can just let loose and play in sandboxes that don’t belong to them, exploring all the what-ifs and whys and hows of their favorite content. This was especially true for a show like MIOBI. There were so many fantastic characters and relationship dynamics that had the potential to go in so many directions. Plus, I feel like every fan of the show had their opinion on what those MIOBI medal podiums would have looked like (again, Payson FTW!), which added an entire separate level of speculation beyond the usual fanfic fodder of ships and tropes! On top of that, we were robbed of a proper conclusion. I’m not sure I’ll ever be over it. I’ve said it before, but I think that lack of closure for MIOBI was one of the reasons I wrote Break the Fall. I wanted an Olympic gymnastics story with an ending!

How did you develop a relationship with show runner Holly Sorensen?

I met Holly on Twitter! I’m not sure when exactly I reached out to her, but it was probably toward the end of the second season. This was back when Twitter was a place where all anyone ever did was live-tweet whatever show they were watching. At least, that’s pretty much all I was using it for at the time!

Holly was so gracious and lovely, even when I was ranting at her for certain plot points or character arcs not going the way I wanted! When the show wrapped and was eventually cancelled, she sent me some amazing props from the set, including my very own Rocky Mountain Gymnastics gym bag! She was also kind enough to write a blurb for my first novel, Game. Set. Match. and then for Break the Fall, too! It’s been a wild ride from fan to peer over the last decade or so, and I’m so grateful for her support.

How did your engagement with this show contribute to your writing process for Break The Fall?

There is a direct line from my watching MIOBI to being able to write Break the Fall. MIOBI totally hooked me and thus I started writing fanfiction, which I wanted to be as accurate as possible, so I started to research the sport on a far more technical level than I’d ever done before. That led me to the gymternet where I quickly made friends with people who really understood the nitty gritty details of the sport. Through the years, my knowledge of gymnastics increased to the point where I was able to cover the Rio Games in 2016 as a freelance analyst for Fangirlish.com. Without that knowledge I would never have been able to credibly write a book like Break the Fall. I wouldn’t have even attempted it. Gymnastics is not the kind of sport where you can pretend you know what you’re talking about and get away with it.

Other than MIOBI, what were some inspirations you looked to while writing Break The Fall?

I was definitely inspired by many of the shows I watched growing up. I’m one of those weird authors that doesn’t get much inspiration from other books. Most of my muses are TV characters. Leo Adams, for instance, the love interest in Break the Fall, is very much modeled after Pacey Witter from Dawson’s Creek. I definitely was inspired by the group dynamics from shows like Friday Night Lights and Beverly Hills 90210 (the original, not the remake. I’m OLD!). There were also a lot of the sports movies that were foundational for me like, The Mighty Ducks to The Sandlot and A League of Their Own. Those stories, while they don’t necessarily reflect the same sort of character or narrative arcs as what I tackled in Break the Fall, were able to provide me with a decent framework of how competition should play out creatively rather than how it plays out in real life!

You’ve also written books about tennis. In both books and TV/movies, how do you think writing about gymnastics differs from writing about more mainstream sports?

Honestly, I’m not sure it’s all that different if you’re doing your job as an author properly. Sports media in general needs to build its world effectively for the audience to fully understand the stakes and consequences that the characters are facing and experiencing. Whenever I’m describing how I write sports narratives to my non-sporty writer friends, I always talk about it like if I was building a world in a fantasy novel. Readers know the spells in the Harry Potter books because they’re necessary to understanding the world Harry lives in. For my tennis books, readers needed to learn that a player whose game is all power won’t necessarily be successful on clay tennis courts, as opposed to hard or grass courts, because the clay surface slows down the ball. For Break the Fall, readers needed to understand that a Yurchenko one and a half isn’t just less difficult than a double or an Amanar, but that a gymnast competing that vault probably won’t be an Olympic level all around medal contender.

Of course, like you said, gymnastics is also a non-mainstream sport, so I look at it as having to build that knowledge base from the very, very basics all the way up to, hopefully, a reader understanding the deductions for handstand angles on bars and a lack of fluidity on beam. All of those things, however, don’t matter nearly as much as the emotion we attach to them in writing or on the screen. For example, hockey is probably the mainstream sport I understand the least, but when I’m watching the movie Miracle, does my lack of technical knowledge of the sport keep me from fully appreciating the enormity of the USA team being Russia? Nope, because the story arc gave me enough basics to understand the hockey bits and attached those basics to the emotions, both high and low, that the characters were experiencing.

I will say, though, one of the things I was mindful of, writing a gymnastics book, was making sure that gym fans who understood the sport on a highly technical level wouldn’t feel like the gymnastics was watered down. The math all works out. The team is created based on actual scores I worked out beforehand. The medals are distributed based on the individual characters’ strengths and weaknesses and there were moments where I was definitely throwing caution to the wind and writing out a routine or skill that most readers were probably going to skim over and that, hopefully, the gym fans would really appreciate!

Now that you have a book under your belt, would you ever consider writing for TV or films?

I’d love to! I’m not sure if that’s in the cards for me! I live in New York, not Los Angeles, where most writers’ rooms are based and I do have a day job beyond writing books, but I’ll never say never!

Watching a show produced a decade ago will always reveal some anachronisms, but what about MIOBI remains most relevant today?

I think what’s truly stunning is how unfortunately prescient the show was in playing out storylines of eating disorders, gym politics, bullying, abusive coaching, sexual abuse and an incredibly hostile and negligent national governing body. So much of what we might have rolled our eyes at as viewers while watching the show, silently begging them to focus less on the drama and more on the gymnastics, turned out to be extremely accurate storylines. I think the show leaves a legacy far beyond what some people could dismiss as a short-lived ABC Family drama.