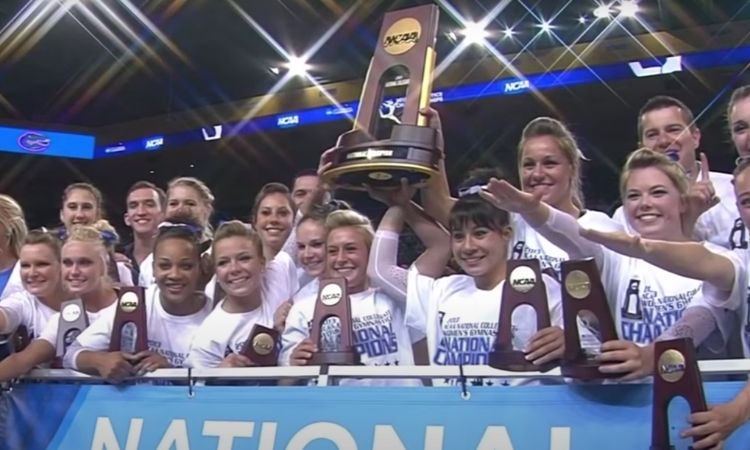 New to NCAA gymnastics? Or, perhaps you’re not new but are missing it as much as we are? This week, six of our editors sat down to discuss the meets we wish we could travel back in time to watch, the routines we would kill to see in person and the special moments that made the meet truly stand the test of time.

Is there a meet or gymnast we didn’t discuss here? Is there a topic you want to see us discuss on a future roundtable? Let us know in the comments or on social media!

Why this meet: I went back and forth with a few meets. Do I choose a crazy 2004 monstrosity where Stanford scored a 198.875 and 49.925 on floor? Do I choose one with a throwback fave like Kathy Johnson Clarke when she was at Centenary? Ultimately I went with a bit of a mix between crazy scoring and first love with Georgia’s 1996 meet on February 10. I actually don’t have much info past the date of the meet and a couple of interesting scores, but I know it is one I can’t miss.

Gymnasts you’d be most excited to watch: Leah Brown! Karen Lichey! Kim Arnold! Lori Strong! Do I really need to say more? These gymnasts defined Georgia gymnastics in the ’90s, and to see them compete together—and put up huge numbers—would be an absolute dream.

Routines you’d be dying to see: Obviously the entire vault rotation. Leah Brown went on to win the national championship on the event that year, so you know it was big, powerful and gorgeous.

Moments that stand out to make this meet special: Georgia’s vault rotation totaled 49.925 in this competition. Is there anything better than a rotation of stellar, stuck vaults? Plus, 1996 means they likely weren’t all Yurchenko fulls. AND it wasn’t 2004! So there’s more of a chance of at least some of the scores being fairly legit. We all know what a dynasty Georgia gymnastics used to be. One last fun fact: Karin Lichey went on to score her perfect 40 just 13 days later.

Why this meet: Everyone knows 2004 was a crazy time in NCAA gymnastics, but that doesn’t change the fact that I would love to go back and watch the Gophers earn their career high team score. I also want to point out that Arizona State’s 198.125 was only its FOURTH highest team score. I would love to be able to watch the Sun Devils during this exciting time in their history.

Gymnasts you’d be most excited to watch: This feels obvious, but Ashley Kelly, who is one of only 11 gymnasts to earn a Gym Slam and arguably one of the best gymnasts, if not the best, to ever compete for Arizona State. I’d also love to see Carolyn Yernberg, who was the first Gopher gymnast to score a perfect 10 (achieved in 2002 on vault).

Routines you’d be dying to see: Well, this meet had FIVE 10s, so it would be pretty neat to see all of those (two on vault, two on beam and one on floor). But mostly I’d love to see Ashley Kelly’s perfect beam routine and Maggie Germaine’s perfect floor (this video is from a different meet, but it’s another one of her 10s).  Another routine that would be fun to watch would be Minnesota gymnast Mary Skokurt on bars, who earned a 10 from one judge at this meet. Skokurt had a unique bar routine. I’d also like to point out that I am obsessed with the fact that Ashley Kelly’s beam song is Kelly Clarkson’s “A Moment Like This.” Peak 2004, tbh.

Moments that stand out to make this meet special: As I mentioned above, this meet had five 10s. 2004 is the standard against which all the crazy scoring is compared, but that doesn’t change the fact that this was an incredible season for Arizona State and a record-setting meet for the Gophers.

Why this meet: Meet host Alabama not only kept the Bruins from earning a third consecutive national championship, but also edged out rival Georgia to win its first title since 1996. This meet features some of the all-time great coaches and gymnasts going head-to-head in dramatic fashion; what’s not to love?

Gymnasts you’d be most excited to watch: Former elite stars Jamie Dantzscher, Alyssa Beckerman and Theresa Kulikowski are obvious choices, but Andreé Pickens would be my top pick. The Alabama standout is one of my all-time favorites, and her performance—just her fifth meet after returning from an Achilles tear—is stellar. I’m also excited to watch her father’s reactions; before Kevin Korth, Byron Pickens was the quintessential Gym Dad.

Moments that stand out to make this meet special: Pickens’s floor routine to the Crimson Tide’s fight song brought the house down and set the tone for her team’s entire competition, but the tears started flowing when junior Kristin Sterner scored a 9.850 on beam to clinch the title. Pickens capped off the victory with a beautiful final performance. On a lighter note, keep an eye out for Utah’s bonkers silver warm-up suits, Sarah Patterson’s high-fashion mullet and Greg Marsden’s moustache. You can fast-forward through Miss Val explaining why she thinks beam distractions are “a choice.”

Why this meet: At this meet, Florida became only the fifth team to win the NCAA team title, and it did so in dramatic fashion. The Gators started out by counting a fall on beam in the first rotation but rallied on the other three events to claim the title over Oklahoma by just two tenths. It was an exciting meet from start to finish, and I would have loved to have been able to witness it live.

Gymnasts you’d be most excited to watch: I’d obviously be excited to see Bridget Sloan, as she is a major reason as to why I got into NCAA gymnastics in the first place. I’d also be excited to see world vault champion Kayla Williams as well as Gator great Marissa King.

Routines you’d be dying to see: The Gators’ entire floor rotation. All five counting scores were 9.900 or greater for a total of 49.725. More impressively, the rotation occurred after the disastrous rotation on beam and a fall in the leadoff spot.

Moments that stand out to make this meet special: As I said above, Florida became only the fifth team to win an NCAA team title, and this was also tied for Oklahoma’s best finish. With Georgia, UCLA and Alabama being the dominant forces throughout the early 2000s, this meet marked a turning point in the sport where Florida and Oklahoma became the new powerhouse teams. Since this meet, all but one of the NCAA team titles has been won by one (or both!) of these two teams.

Why this meet: I’ve been thinking about Lindenwood a lot since the announcement of a new team at Long Island University. The Lions are the youngest team currently competing in the NCAA, and they’re a great model for how a new team can find success quickly and sustainably. I didn’t start watching NCAA gymnastics until 2014 (and honestly didn’t learn about Lindenwood until several years later), so it’s really hard for me to imagine the energy of a team’s very first meet.

Gymnasts you’d be most excited to watch: Frankly, I’m in this for the vibes not the gymnastics, but I am a big fan of Penn State’s Sharaya Musser, who won the AA here. I’d love to have seen Chilean elite Simona Castro during her NCAA career, and while Lindenwood all around GOAT Valeri Ingui had a tough first meet, she’s still wonderful.

Routines you’d be dying to see: Lindenwood’s Rachel Zabawa led the Lions on beam at this meet and became the USAG national champion on that event only a few months later. It’s a very special routine. Plus Nina McGee did floor, so obviously that.

Moments that stand out to make this meet special: Just these guys getting to show us their world for the first time.

Why this meet: Rebecca honestly inspired me with her inclusion of a team’s first ever meet, so I went with the youngest team on my beat: Arkansas. Instead of choosing the Razorbacks’ first meet, I went with their fourth, which just so happened to be against the defending national champions. Not intimidating at all! Nonetheless, the Razorbacks put up a respectable total at home. I’d be really interested in the dichotomy on display here.

Gymnasts you’d be most excited to watch: I would be intrigued by pretty much everyone on the Razorbacks’ all freshman team. Team captains Brooke Lawrence, Hannah McLeod and Dana McQuillin packed a punch; McQullin especially would turn out to be a four-year standout and the first ever national qualifier for Arkansas.

Routines you’d be dying to see: Alabama’s Ashley Miles would become the national champion on vault later that year; her full was always clean and reliable, as was her floor routine. Her teammate Michelle Reeser was also a performer on floor. Gymback Melissa Leigh also had a high-flying bars routine that would cement her in Razorback record books for that event.

Moments that stand out to make this meet special: I can’t find much about this meet’s scoring other than the team totals, but I have to imagine the Arkansas floor rotation must have been super exciting. To know your team has what it takes to go up against the height of the sport, and for that to culminate into the most exciting event of the night in front of the home crowd, must have been a special moment.

READ THIS NEXT: Make It or Break It Down: Season 1, Episode 1