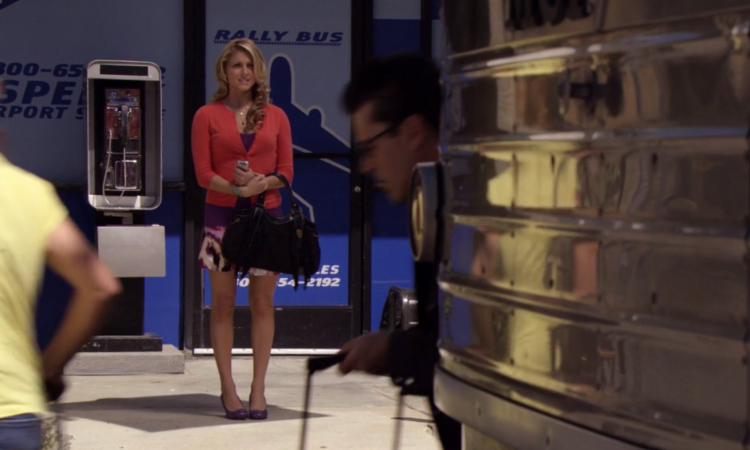 This is the second episode to be called “Where’s XX?” A little originality would be appreciated.

Emily and her mom wake up at 6 because Joe was allowed to sleep in Emily’s bed. Oh no WAY a drifter would be spending the night in my bed. If he could afford to bail out the Kmetkos, he could afford the nearest Motel 8.

Joe, apparently, has overstayed his welcome and cooked up egg white omelets and lattes all around. I have to say, the trope of a man surprising me with breakfast in my own house has never been that romantic to me…what if I wanted to use those eggs for something else? Emily’s not impressed either since she spurns said omelette and leaves immediately.

At the gym, the original three are commiserating on last night’s crazy events. Lauren apparently decided her party hair was too good to wash out for a pedestrian gymnastics practice.

She perks up as Kaylie mentions she hasn’t talked to Carter since last night, but attention is quickly stolen as Payson whips out a full bar routine complete with a full-in dismount. But because that dismount was only impressive when Emily did it as a plot point, we move on.

“Payson has issues of her own.” “Not the kind that come with your husband punching a teen in your living room.” Idk, Mr. Keeler’s from Minnesota…I can totally see him bottling up that Midwestern rage and saving it for a rainy day.

In a dramatic speech to the gym, Sasha reveals that the critical “no dating rule” has been broken and Carter has been suspended from the gym. As for the other offender, “[his] source refused to name the girl involved.” Did you guys know Sasha was also the third journalist who broke the Watergate scandal?

He also drops the bombshell of gym event rankings for nationals, which triggered trauma from middle school musical casting calls I didn’t know I had.

I love so much about this. It’s not in Olympic order, there’s no last names listed, two of the random alternates could also double as suburban moms (hey, Kim and Robin)…too good. If I was a cast member and could steal a prop after the season wrapped, this might be it.

Payson comes in and loses her mind for a brief moment about why she’s not ranked first on beam. I mean, I can’t think of a single more problematic decision he’s made as coach, so I get her anger.

Meanwhile, Summer walks into the gym with a bombshell of her own for her dope of a boyfriend: “I did an internet search for Leslie Tanner, and it only took me about 20 minutes to find her.” Oh dang, she broke out the big guns…the INTERNET. Maybe there’s another budding investigative reporter in this show we don’t know about. This is how I imagined her scrolling to the second page of Google:

Kaylie’s mom breaks into the fortress of Angsty Kaylie’s room and announces she’ll help her see Carter one last time before nationals. “Just don’t tell your dad because he’ll kill us both.” The duo apparently sees no issues with this statement and hugs it out because the bond of being attracted to scumbag men is truly one of the strongest there is.

Joe and Emily’s brother have a bonding moment that comes with this truly crackling dialogue: “At least you don’t hate me.” “That’s because I never expect anything from you, so when you leave you don’t disappoint me.” Why does the most wisdom from this show come from throwaway characters we barely ever see?

Lauren’s dad gives her her mom’s phone number because he gets she really wants to talk to her. All these men spewing wisdom makes me wonder if I’ve actually tuned into “The Wire.”

Behind every snobby girl is her sock monkey. Remember that the next time your rude coworker makes a pass at your outfit.

Kaylie bounds out to Carter’s jeep and announces she’s skipping nationals in solidarity with him. He rewards that solidarity with a demonstration of his own loyalty: revealing he cheated on her the night of the kegger.

This show loves sweeping shots of gymnasts running from the gym to nowhere. Very Aaron Sorkin.

Emily arrives home to find her mother wearing an outfit that tells Emily right away she was up to some Working From Home™️.

I’m laughing that she came out in this hideous robe and Joe had the wherewithal to pull on his dad at a BBQ outfit.

At the bus station, Lauren awaits her mother, who doesn’t show up. Maybe she can find something to comfort herself in this her giant, incongruous bag.

Undeterred, she shows up at Payson’s house and reveals that Kaylie has run away all the way from the Rock to who knows where. They use their deductive reasoning skills to discover she’s at the gymnastics camp they used to go to when they were kids.

The three are really considering not going to find her because of Sasha’s 10 hours of sleep rule (if these were my friends…) but make the 3-hour trek.

So like, no one else was around this whole time? I might pick a slightly less harrowing destination to reassess my life choices.

Carrying on the trend of people sharing news when it’s warranted the most, Lauren chooses now to tell Kaylie she slept with Carter. Blah blah you slept with my boyfriend blah blah team work blah blah we’re all in this together and somehow car keys get thrown into the water and the girls have no way of getting back.

The moms get together, note that they haven’t been able to contact any of the girls, and pretty much just say ¯\_(ツ)_/¯ to it all. And why not, because the girls have it all under control.

Like what happens at much more low stakes campfires than this, the secrets are starting to come out.

“Why would my dad blackmail Marty?” “Because Marty was sleeping with my mom.” Basically the equivalent of-

-except in the middle of the woods with not-as-smart people.

Back in civilization, the moms are also in the spirit of sharing secrets as Kaylie’s mom drops the cheating with Marty bombshell after one too many barbs from Chloe. She does it with the weapon of all the finest drama queens in hand:

Summer’s just like, adultery? Where are my rosary beads? She tells Mrs. Cruz to ask God to help her, and I’m wondering at this point…does the separation of church and state not apply to major US TV networks? Anyway, if I was Mrs. Cruz:

Keeping up the trauma bonding in the woods, Lauren comes clean: “If it’s any consolation, my mom’s a drug addict.” Payson drops the Cortisol bombshell and Emily just stares like…

The girls decide they’re not going to let drama tear them apart in the face of impending doom, and in the face of being trapped in the woods. Instead, they rally around the tree they carved their initials in all those years ago.

As Emily ponders what it must have been like to possess the family stability required to send her to gymnastics camp, she reveals she has a key to the car after all and they can all leave. If I was one of the other three, it would take a lot for me to not leave her there at that point.

They arrive at the gym the next morning to take nationals by storm.

Emily is announced as team captain, everyone hugs and NONE FOR THIS GUY.

Faker Than Producing a Roaring Campfire Without Notice

Realer Than Craving Attention so Much You’re Willing to Put Others out to Get Them to Care (…no? just me?)

MIOBI may have had a negative total this week, but the surprising lack of annoying males throughout the narrative was a positive in my eyes.