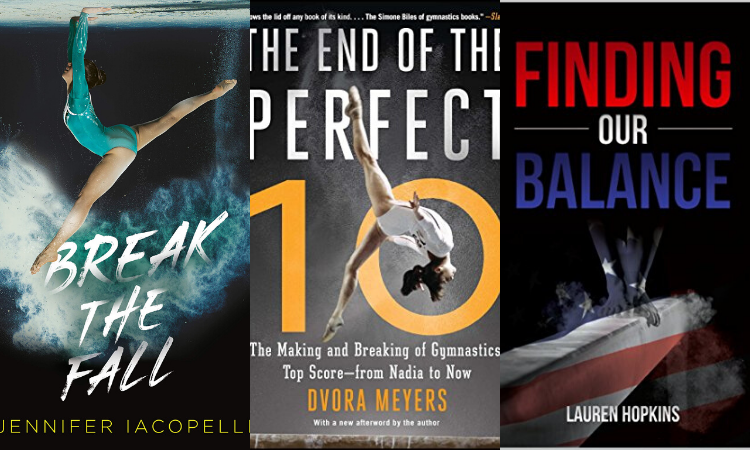 Most of us have been at home for over a week now—even though it seems like much longer—and it’s likely your old go-to ways to keep yourself entertained are starting to lack the spark they use to bring as well. Take a break from your TV screen and consider reading one of these gymnastics-themed books instead. Whether you’re into fiction or prefer memoirs, there’s something for every gym fan on this list.

Wondering how to read them? There are a number of ways you can access these titles. If you have a library card, the New York Public Library just released an app that allows you to access over 300,000 books in its catalogue. Scribd, an app that features ebooks and audiobooks, is offering a 30-day free trial. Or, if you’re more into reading physical books, we suggest shopping local. Many independent bookstores are providing drive-thru or delivery services at this time. It’s a great way to support your favorite shops as they might be struggling to make ends meet due to the decrease in business.

Goodreads Summary: When 15-year-old newcomer Amalia Blanchard makes a splash with her beam routine in front of the entire U.S. national team, veterans like Ruby Spencer—whose 2012 Olympic dreams were dashed due to an injury just a month before the Games—and Emerson Bedford—a two-time world champion set to run the show in Rio—start to take notice. With preliminary competitions to get through before the team trials, all three have something to prove, as Emerson struggles to maintain her queen bee status, Ruby tries to show everyone she is still a contender, and Amalia hopes she has what it takes to stand out in a talented field. Finding Our Balance follows these extraordinary teenage girls through heartbreak, triumph, and everything in between as their lifetime of training comes down to a single summer that will change their lives forever.

Book 2: When It Counts

Goodreads Summary: A year ago, 15-year-old Amalia Blanchard failed to qualify to nationals, but now with less than two months until the 2016 Olympic Games, she’s the United States beam champion on her way to fight for a spot on the Olympic team. Gymnastics is Amalia’s life and she’s sacrificed everything to get this far, but she still has to prove she has what it takes to stand out in Rio. The competition is tough and nothing is guaranteed, not even for her teammates, recently-crowned national champion Ruby Spencer, who missed the 2012 Olympics after rupturing her Achilles a month before the Games, and world champion Emerson Bedford, whose personal drama is threatening her mental game when she needs it most. Picking up where “Finding Our Balance” left off, “When It Counts” follows Amalia, Ruby, and Emerson on the next steps in their journey to Rio.

Book three doesn’t have a projected release date yet, but there are plenty of other great gymnastics books to check out in the meantime! Plus, maybe Hopkins will find some time during the pandemic to put pen to paper.

Letters to Nowhere by Julie Cross

Goodreads Summary: Her family may be shattered, but her dreams aren’t… Seventeen year old Karen Campbell has just lost both her parents in a tragic car accident. Grief stricken and alone, her gymnastics coach opens his home to Karen, providing her a place to live while she continues to train, working toward a spot on the world championship team. Coach Bentley’s only child, seventeen year old Jordan is good-looking and charming enough to scare away a girl like Karen—someone who has spent ten times more hours on balance beams and uneven bars than talking or even thinking about boys. But the two teens share a special connection almost immediately. It turns out Jordan has a tragic past of his own, grief buried for years. As Karen’s gymnastics career soars, her nightmares and visions of the horrible accident grow in strength. She can only avoid facing her grief for so long before it begins to surface and ultimately spin out of control in a very dangerous way. Can discovering love and lust (simultaneously) help with the grieving process or will it only provide a temporary distraction while waiting for reality to hit full force?

While you can no longer buy this series anywhere online, we have good news! The entire story, including some bonus chapters, are available to read on Wattpad for FREE.

Cross also has a number of other books that she’s written about subjects other than gymnastics (hockey, baseball, time travel, modeling, a child prodigy doctor—you name it), and they’re all great, too! If you love Letters to Nowhere, we suggest checking them out as well.

Break the Fall by Jennifer Iacopelli

Goodreads Summary: Audrey Lee is going to the Olympics.

A year ago, she could barely do a push up as she recovered from a spine surgery, one that could have paralyzed her. And now? She’s made the United States’ gymnastics team with her best friend, Emma, just like they both dreamed about since they were kids. She’s on top of the world.

The pressure for perfection is higher than ever when horrifying news rips the team apart. Audrey is desperate to advocate for her teammate who has been hurt by the one person they trusted most–but not all the gymnasts are as supportive.

With the team on the verge of collapse, the one bright spot in training is Leo, her new coach’s ridiculously cute son. And while Audrey probably (okay, definitely) shouldn’t date him until after the games, would it really be the end of the world?

Balancing the tenuous relationship between her teammates with unparalleled expectations, Audrey doesn’t need any more distractions. No matter what it takes, she’s not going to let anyone bring them down. But with painful revelations, incredible odds, and the very real possibility of falling at every turn, will Audrey’s determination be enough?

The Flip Side by Shawn Johnson

She may seem like your average high school sophomore—but she’s just really good at pretending.

Because outside of school Charlie spends all her waking hours training to become one of the best gymnasts in the world. And it’s not easy flying under the radar when you’re aiming for Olympic gold…especially when an irresistible guy comes along and threatens to throw your whole world off balance.

You Will Know Me by Megan Abbott

Goodreads Summary: Katie and Eric Knox have dedicated their lives to their fifteen-year-old daughter Devon, a gymnastics prodigy and Olympic hopeful. But when a violent death rocks their close-knit gymnastics community just weeks before an all-important competition, everything the Knoxes have worked so hard for feels suddenly at risk. As rumors swirl among the other parents, revealing hidden plots and allegiances, Katie tries frantically to hold her family together while also finding herself drawn, irresistibly, to the crime itself, and the dark corners it threatens to illuminate.

Abbot has a number of popular books in addition to You Will Know Me, including Dare Me, which recently completed its first TV season on USA Network. Read the book then binge the series!

Goodreads Summary: Five gymnasts. One goal. Grace lives and breathes gymnastics—but no matter how hard she pushes herself, she can never be perfect enough. Leigh, Grace’s best friend, has it all: a gymnastics career, a normal high-school life…and a secret that could ruin everything. Camille wants to please her mom, wants to please her boyfriend, and most of all, wants to walk away. Wilhelmina was denied her Olympic dream four years ago, and she won’t let anything stop her again. No matter what. Monica is terrified. Nobody believes in her—and why should they? By the end of the two days of the U.S. Olympic Gymnastics Trials, some of these girls will be stars. Some will be going home with nothing. And all will have their lives changed forever.

The End of the Perfect 10 by Dvora Meyers

Goodreads Summary: It was the team finals of women’s gymnastics in the 2012 London Olympics and McKayla Maroney was on top of her game. The sixteen-year-old US gymnast was performing arguably the best vault of all time, launching herself unimaginably high into the air and sticking a flawless landing. But when her score came, many were baffled: 16.233. Three tenths of a point in deductions stood between her and a perfect score. But if that vault wasn’t perfection, what was?

For years, gymnastics was scored on a 10.0 scale. During this era, more than 100 “perfect” scores were awarded in major international competitions. But when the 10.0 scoring system caused major judging controversies at the 2004 Olympics, international elite gymnastics made the switch to the open-ended scoring system it uses today, which values both difficulty and technical execution, making perfect scores a thing of the past—and forever altering the sport in the process.

With insight, flair, and boundless love for the sport, gymnastics insider Dvora Meyers answers questions that fans have been asking since the last perfect score was handed out over twenty years ago. She reveals why successful female gymnasts like 2016 Olympics All Around medalists Simone Biles and Aly Raisman are older and more athletic than they have ever been before, how the United States became the gymnastics powerhouse it is today, and what the future of gymnastics may hold.

If you ended up loving a book you read from this list, go on Amazon and leave a review no matter if you ordered your copy from the site or not. Adding a review for a book you enjoyed—even just a sentence or two—benefits the author by allowing more potential readers to find their book.