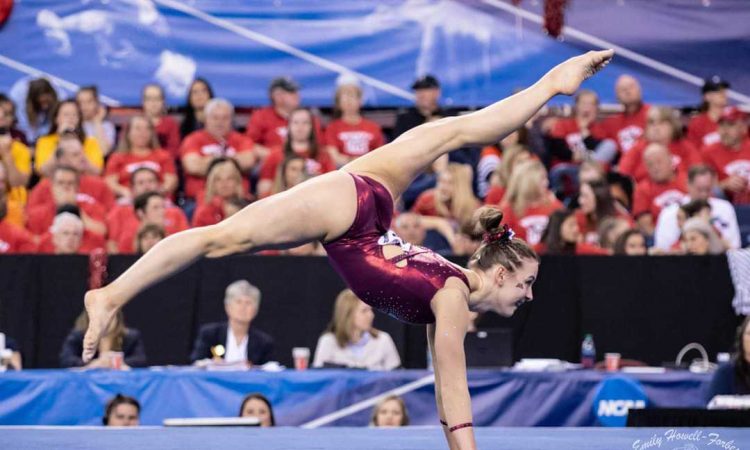 Wacky late-season non-conference duals are lowkey the most fun part of the gymnastics season, and this is a good one. Both are upstart teams with incredibly stylish gymnastics that have made great strides over the last few years. And both have a group of core gymnasts that absolutely need to deliver for the team to succeed.

Drew Grantham has been just a little off on vault for most of this season, and she hasn’t competed that event for the past two meets. But when she’s not in the lineup, the Wolfpack typically has to use a Yurchenko layout in her place, which is in itself a bit of a problem. Every event but vault is ranked in the top 25 for this team, but vault is a matter of survival. That said, I’ve fallen desperately in love with the Wolfpack beam lineup this year, and I can’t wait to watch it again.

Minnesota hasn’t been enjoying vault this season either, with some fairly lukewarm Yurchenko fulls joined by great, but mercurial, 10.0 starts. Bars and beam need to be great to bail out the leg events, and meets like last week, when the Gophers collectively forgot how to hit a handstand on bars, just can’t happen this close to regionals seeds being finalized.

Quaglia (Minn): Blind to pike Jaeger, a little heavy with soft elbows, to overshoot. Blind full double back with a little foot shift. 9.825

Grantham (NCSU): Yurchenko full, oh, so glad this is here. Pretty good with a little hop. 9.75

Loper (Minn): Nailed the first handstand, Maloney to Pak, blind full double back with a tiny hop in place. 9.85

Shepard (NCSU): The standard of both lineups just jumped up significantly. Huge, pretty FTY with a hop. 9.85

Lu (Minn): Maloney to Pak, great, half pirouette, double layout so airy with a little scoot back. 9.9

Beucler (NCSU): Soft on the table but wraps in quickly on her FTY and sticks it. Good one! 9.825

Sales (Minn): Bail, great, blind to Markelov with one foot flexed. Double layout a touuuch close to the bar with leg separation and a little scoot. 9.9

Ramler (Minn): Maloney to Pak, van Leuuwen, so pretty. This is her good routine. Toe on to FTDB stuck. 9.925

Great start for both teams! Minnesota’s best bar routines can score a LITTLE higher than that but can’t be too upset with a team score that high at a non-conference road meet. For NC State, breaking 49 on vault means that the world is full of rainbows and it can just cruise from here.

Shepard (NCSU): Blind to Jaeger, pretty with great turnover, Pak, big arch on her half turn on the low bar. FTDB weird and falls forward onto her hands. 9.025

Quaglia (Minn): Pretty technique on her FTY, waits to initiate the twist, clean with a hop back.

Sales (Minn): Comes in a touch forward on her FTY and scoots forward a touch. very close to stuck. 9.8

Robinson (NCSU): Blind to Jaeger, solid, nice Pak. Little slow on her half turn, shy on a high bar handstand, blind full double back on her heels and took a step back. 9.75

Cox (NCSU): Tkachev, slightly funky dynamics, having to work for her handstands. Good bail to toe shoot, FTDLO with a tiny step to the side. WOW great form too on that dismount. 9.85

Loper (Minn): One and a half, little hop in place. Tons of momentum, the Gophers look so excited. 10!

Kent (NCSU): Jaeger to overshoot, little flat on the low bar there, double layout with a hop back. 9.825

Wow, Minnesota. Stone cold there on vault. This could be a season high score for the Gophers if they can keep it together on floor. Some technical issues for NCSU on bars there but surviving with a strong event coming up.

Ramler (Minn): Ring full, double pike with chest a little low. Switch half split full, Rudi pretty good, keeps landing with her feet a little apart and the lunge just looks a little unconvincing. One and a half through double full with a scoot back. 9.775

Foland (NCSU): Kickover front BHS BHS fantastic. Switch split a little funky in the middle but gets through. Full turn, front aerial, cartwheel to one and a half dismount with a step forward. 9.8

Remlinger (Minn): Double pike, weirdly travels sideways with a scoot out. Switch side Popa, one and a half front layout with a big step forward. Double back. 9.825

Sales (Minn): Had a video issue and missed this one but commentators are talking like it was good. 9.875

Loper (Minn): Front lay to Rudi. Switch ring tour jete full. Two and a half twist, really good, Y turn, one and a half front lay. Great routine and she looks thrilled, just grinning and skipping around. 9.85

Williams (Minn): Front double full, great straddle leaps, one and a half front lay and missed the punch, finished it sort of underneath her self but got it to her feet. Rudi with another scoot back. 9.8

On track for a great total for both teams heading into strong events. Minnesota was pretty lukewarm on floor, but that’s normal.

Shepard (NCSU): Nice double pike, slightly long lunge, front lay front full. Double back and a quick hop to lunge that makes me feel something was a little off. 9.875

Loper (Minn): BHS LOSO good, full turn, kickover front to beat. switch straddle quarter. One and a half with a hop. Great, so steady. 9.925!

Nelson (NCSU): Two and a half punch front, iffy landing on her leap pass, underrotated what I assume was meant to be a wolf jump full quite badly. One and a half front pike, very good. 9.8

Negrete (NCSU): Double pike, good, Front full front lay, tried to stick it and had to scoot back, double back. Great routine. 9.85

Sales (Minn): BHS BHS LOSO, little adjustment. Switch switch side and weight back, swing check and gets it back. Gainer pike with a big hop forward. 9.8

Beucler (NCSU): Great double pike, Popa wolf full very good. One and a half front lay, double stag switch side. Great double back. Really good routine, someone is yelling 10 which honestly I always love to see at small teams. 9.9

Definitely some soft scoring there but a great result for both teams. Season high on both sides and some landmark individual results. There are still some moving parts, but Minnesota will likely enter the top ten nationally after this week.