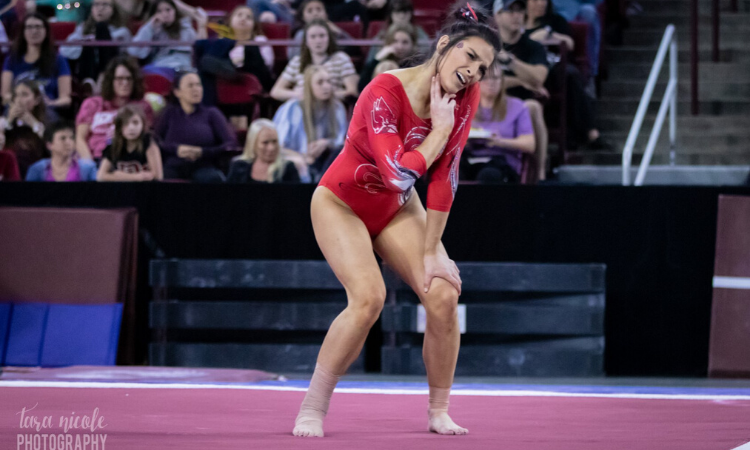 A word on methodology: We don’t actually know which teams will qualify to regionals yet! Remember that individual qualifying to regionals applies to teams who finish the regular season outside of the top 28, i.e. those who advance straight to round two and don’t have to compete in a play-in. Since there are still so many moving parts with a month to go until regionals, we’re going to consider individuals from teams currently ranked outside that No. 28 team cutoff. Of course, some of these athletes’ teams will ultimately qualify, so we should all apply common sense and restraint in making predictions at this point. Note that we are using NQS scores as of today, which takes into account the scores from Monday’s meet between Stanford and Arizona State.

Denelle Pedrick remains at the top of our list despite being unable to drop her low total last week. She’s joined at the top by Lea Mitchell, who debuts on our list after Michigan State slid a bit in the rankings this week, and into regionals playoff position. Hannah Joyner’s NQS jumped about a tenth, putting a little distance between her and the rest of the field. Ariana Castrence jumped Jada Rondeau, and both move up with Utah State’s (and Leighton Varnadore’s) jump into the top 28.

We also saw Angelica Labat fall out of the top group, sitting outside of current qualifying contention, and Dahlia Solorzano-Caruso join the leaders after a stellar double meet weekend. She still has two low scores to drop, and three meets to do it; watch to see if she shoots up the rankings. There’s a possibility that SEMO could have two individual all around qualifiers to regionals!

We’re still keeping our eyes on the group just behind the lead pack as well. Hannah Demers now has enough numbers for an NQS and is just outside of the qualifiers; with one very low number left to drop, she could easily jump into the middle of the pack next week. In addition to these gymnasts, Gabby Landess is another to watch–she has three scores of 39.200 or greater but is still counting two scores in the low 38s; with three meets left she could move into qualifying position with hit meets.

This year’s qualification cutoff is already at a 9.8200, compared to last year’s 9.8150, though that could fluctuate based on which teams move in and out of the top 28 before the end of the regular season. Regardless, this is quite the competitive field! Deja Chambliss shot to the top of the pack with a 0.2000 increase in NQS. Likewise Sydney Jennings, who dropped a 9.700. Hannah Demers debuted on the list in qualifying contention. Iowa, on a bye, slipped into the regionals play-off ranking zone, and Lauren Guerin joined this list. Marissa Nychyk jumped into qualifying contention after dropping a 9.750, as did Alecia Petrikis after dropping a 9.700.

Olivia Aepli bursts onto our list in second place, and teammate Colby Miller scoots into third. Dropping a 9.750 moved Rachel Decavitch into a qualifying position. Kathryn Doran also dropped a low number and moved into contention, though she would currently lose a tie break for the final spot.

Anna Salamone dropped just out of a qualifying position, but with one quite low score still to drop, a strong performance could move her back into the thick of it. Courtney Mitchell was also unable to use an away meet to drop a score, and fell back out of the main pack. Note that Mei Li Costa and Jazmyn Estrella have much lower NQS’s than the rest of our watch list; they’re included because each has one extremely low total left to drop, and doing so should rocket them up the list.

This is the list that changed the most drastically, as gymnasts were able to drop low totals and move up on others who couldn’t capitalize or had a lower potential climb. Notably, Michaela Burton moved up significantly and is in a very sure spot, as are Mia Lord (who makes her NQS debut), Alyssa Worthington and Morgan Tong. Sophia Hyderally makes her NQS debut in qualifying position with one low score still to drop; she is in a solid place.

Isabella Amado and Khazia Hislop both fall out of qualifying position this week. Hislop is concerning because her counting scores are all 9.800 or 9.825 with one 9.875 dropped; she will need to start receiving higher scores in order to have a shot at qualifying on beam. Erin McLachlan is another to keep an eye on; she has three scores of 9.875 or higher so is in a great position to qualify if she can drop a 9.750 and a 9.675 over her remaining four meets.

Darian Burns dropped a 9.725 this week and joined the “you would qualify if regular season ended today” club. Tara Kofmehl did the same, after dropping a 9.750. There wasn’t a ton of movement over last week on floor, despite some reshuffling in the pack leaders.