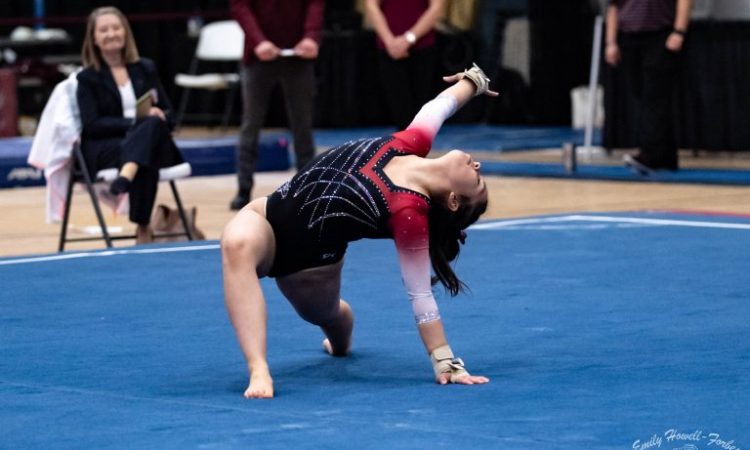 The biggest story of the weekend was SEMO. The Redhawks stunned everyone this week, recording the highest score of the USAG season and their own second-highest score in history. With no video of that meet, it’s hard to understand exactly what happened, but suffice to say that it was spectacular. We also finally had some important ranking shuffles this week after weeks of radio silence from the USAG ranking table. Texas Woman’s overtook Bridgeport in the No. 2 spot, SEMO jumped from No. 8 to No. 5 and Air Force dropped from No. 5 to No. 7 as not only SEMO but West Chester overtook the Falcons.

It’s been a second since Hannah Stahlbrodt has set a program record. I was beginning to worry she didn’t do that any more. (Just kidding, it’s kind of her whole thing.) Anyway, this weekend she got two of them. This bars routine is so special, from the leg form under the bar to the dead stick, and it can score even higher than 9.875

Streete has become a mainstay of Bridgeport’s vault lineup this year, and this Yurchenko full is the best she has ever done in competition.

Every week I try to choose routines with accessible videos to highlight for the weekly awards, because it sucks to describe something and then ask you to just trust me. That means I haven’t featured any SEMO routines yet, and I sure would like to! It’s not for lack of appreciation on my part, I just can’t find footage.

The Big Storyline: Lindenwood recorded another strong score, but fell short of another 195-plus result, in an upset win over Division I Ohio State. The Lions had a consistent day, avoiding counting a fall on any event, but still had to use a few lower bars and floor scores that they will hope to eliminate heading toward postseason. Ryan Henry recorded a season high 39.025 in the all around.

Implications: Lindenwood was in danger of losing the No. 1 USAG ranking for the first time all season this weekend, but a strong performance in Columbia was enough to stay ahead of Texas Woman’s.

The Big Storyline: Bridgeport’s fantastic season high in New Haven included a share of every individual event title, and meet-leading team totals on every event. This is the closest the Purple Knights have looked to postseason shape, and Hayley Bangart’s return to the floor lineup after a month away added critical breathing room to that event. West Chester recorded another strong NQS score and Melanie Wojewoda picked up a bars title. It was another career day for Southern Connecticut’s Hannah Stahlbrodt, who seems to already own half of the record book and today beat her own top marks on bars and floor, walking away with both titles. Brown made a few lineup swaps after last week’s great meet at Ivy Classic and produced another strong team score, its second-best of 2020.

Implications: Because Texas Woman’s had an extremely low score still counting in its NQS, even a season high couldn’t stop Bridgeport from dropping back to third—but the top three are ranked very closely and it’s all at play next week. At this point West Chester is as good as locked into USAG Nationals, while Brown is one spot outside of qualifying position and has a very tough road to bump Seattle Pacific out. Southern Connecticut jumped two spots in USAG rankings, dropping Centenary back to the bottom spot.

The Big Storyline: After delivering the then-highest score of the USAG season early in February, the Pioneers have been on a bit of a downward slide, and a very challenging bars routine with three missed routines added up to another lower score this weekend at Auburn. That said, there were highlights, including Domi Bonzagni’s individual beam title against much higher-ranked opposition.

Implications: Texas Woman’s bumped Bridgeport out and rose to the No. 2 spot in USAG national standings.

The Big Storyline: Penn didn’t have the perfect day but did set a season high on bars en route to a total that, while insufficient to knock off any of its conference rivals was still its fourth-best mark of the season—while student news depicted this as a disaster meet, it really wasn’t shabby. Yale was steady and reliable in its production of a season high score. The Bulldogs came off of a fourth-rotation bye knowing what vault score they would need to beat Temple, which had already concluded its meet. They performed above and beyond to beat all three conference rivals at the meet and delivered one of their best vault rotations in program history.

Implications: Yale held onto fourth in USAG standings as teams changed places above and below it. The results here demonstrated how tightly-contested the ECAC championship will be, since it included the top four teams in the conference and none finished in the expected order based on rankings.

Records: Yale’s 48.725 on vault is its third-best total ever on that event.

Controversies: Vault scores were generous throughout the meet.

The Big Storyline: The Falcons kept pace with Alaska through three events and then slipped behind with a counted fall on beam in the last rotation. There were still highlights, including two individual titles for senior Darian Burns and a great second-place finish on beam by Haven Lanzador in the lead-off position.

The Big Storyline: Seattle Pacific roared back on Saturday, hitting 24 for 24 routines and tying its season high. Kayla Chan got career highs on both vault and floor, finishing second on the former and winning the latter. Darian Burns picked up a second vault title of the weekend, and Miyuki Matsune had a great beam routine.

Implications: Despite a great weekend, the Falcons dropped two spots in the rankings, and heading into a bye week they’re vulnerable to attacks from below.

The Big Storyline: This was a shocking, game-changing result from the Redhawks. Freshman Jolie Miller set the tone in the first rotation, recording a career high 9.875 with her incredibly unusual bar routine that includes a piked Tkachev and an Ezhova. Dahlia Solorzano-Caruso didn’t drop below 9.825 on any event en route to her incredible best-ever all around total, and Anna Kaziska wasn’t far behind her, with a 39.100 in the all around. SEMO scored season highs as a team on every event but floor, which has been imperious since the end of January.

Implications: SEMO competed again later in the weekend, but accomplished the larger objective of making us all take it much more seriously.

Records: In addition to the historic team score, SEMO set a program record of 49.075 on vault. The 49.050 bars score was third in team history.

The Big Storyline: SEMO had a more grounded meet than its Friday showing, but was still incredibly impressive and recorded its second-highest score of the season. Kaziska tied her season high on beam to win a title there as well on beam, and freshman Solorzano-Caruso continued to rack up the hardware. Centenary had a great meet, picking up a season high with the help of a great beam rotation. Cami Bea Austin picked up yet another vault title against Divison I opposition; she’s a contender for the national title on that event this year.

Implications: This amazing weekend was good for a four-place improvement in national rankings and a jump from No. 8 to No. 5 in USAG standings. The Redhawks are now close to locked in for a team spot to the national championship. Centenary dropped back to the bottom spot in USAG action after surrounding teams were able to replace their own much lower NQS drop scores.

The Big Storyline: Cornell was always a long shot to contend at this meet, but it accomplished two major objectives: it improved its NQS considerably by dropping a 187, and it hit a bars rotation the best it has all year. That event has been a major bugaboo, scoring as low as 42.900, so breaking 48.000 is a major accomplishment and should help with morale going forward. Improving on this team total is just a matter of staying on the beam more, which while not easy is a nice concrete objective for the next weeks.

Implications: Cornell did drop a spot in USAG rankings, overtaken by Southern Connecticut, but at this point it’s likely out of contention for a national championship team position anyway. 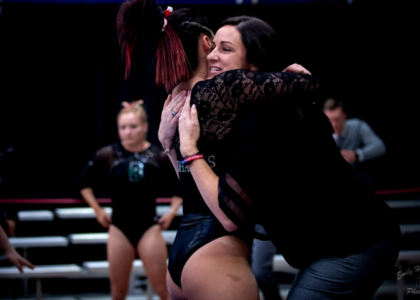 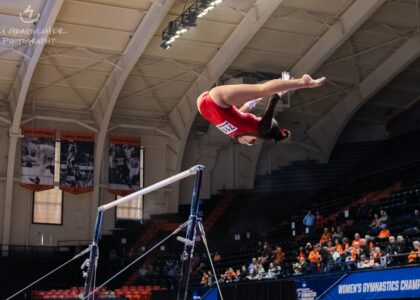 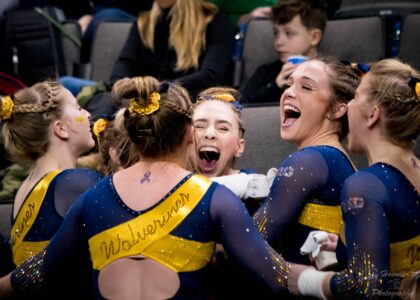