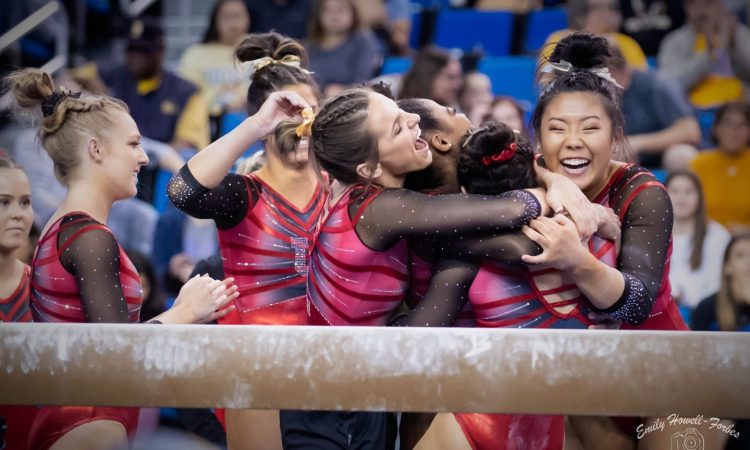 It’s sort of, a little bit, the battle for the Pac-12 regular season championship!!! Aren’t you hyped?

These are the last two undefeated teams in Pac-12 action this year, so that’s going to be the narrative you get on the broadcast. (Utah is outright undefeated on the season. Washington took an out-of-conference loss to Michigan in the first week in a slightly debatable way involving a bunch of 9.6s for what looked like clean beam routines. It didn’t feel important at the time. Now that Michigan is undefeated and that’s Washington’s only loss, it feels a little important!) While there’s one more week of conference action after this one, if Utah can win in Seattle, it ought to have the thing sewn up.

And given the level Utah showed last week in Los Angeles, it is a heavy, heavy favorite. You just can’t argue with that beam lineup. But this year has been a fairytale for Washington, which was on nobody’s radar heading into the year, gained exactly one routine compared to last year’s lukewarm lineups and just can’t seem to stop winning.

Maya Washington will make her vault and all around debut today in her senior year, replacing Brenna Brooks in the anchor position.

Missed the first few routines due to stream showing Oregon basketball senior day situation but found the stream in the end. We missed 9.725 for Kristyn Hoffa on vault and 9.825 for Maile O’Keefe on bars.

LeBlanc (UU): Missed the blind before her Jaeger a touch, good overshoot, double layout pretty with a step.

Paulson (UU): Pak, switch kip, shy on a handstand, blind full double back with a step back. 9.8

Thompson (UW): She had a calf strain earlier in the season, doing two events now but will exhibition floor. Huge FTY, stuck with an arm swing. Chest just a little low. 9.875

Washington (UW): Vault debut! Yurchenko half on, tuck off, didn’t tuck tightly enough and sits it. But she’s got an AA score on the way now for the first time ever and won’t be so nervous going forward. 9.15

Utah not sparkling on bars but fine and resilient, plenty good enough for today. Washington vault showing its weakness today, but that’s bound to happen from time to time. Maya Washington cracking a competition vault lineup for the first time in her college career is just such a big deal and I’m really happy for her.

Nelson (UW): Blind to Jaeger to overshoot, bent elbows on the catch there, blind full double back stuck. Just that overshoot catch is killing her, everything else is nailed. 9.85

Reinstadtler (UU): Pretty full, flared out, hop back. She always gets style points. 9.8

Washington (UW): Slight arch on her first handstand, clear hip to Gienger to overshoot. Aggressive handstands, FTDB with a little hop back. 9.9

Hall (UU): Came up short last week, aggressive this time. One and a half with a big step forward. 9.85

Isa (UU): Full, a bit flat off the table but great landing, little hop in place. Replay from the side shows she doesn’t have a lot of amplitude at all, feet coming quite close to the table at the end of the first salto. 9.775

Thompson (UW): Blind to Jaeger, never the cleanest position, little arch on a HB handstand. Washington has been gunning for these handstands in training according to Amanda. FTDB beautiful and stuck. 9.9

Burch (UU): One and a half, form throughout like usual but great landing, jump to the side and grinning. 9.875

Roberson (UW): Cast over to pike Jaeger to overshoot, great, double lay stuck. DANG. 9.85. Raised eyebrow emoji. Apparently the Jaeger was close to the bar, couldn’t see that on the stream.

Tessen (UU): One and a half, her usual, great, little scoot back. She has superpowers this year. 9.925

Copiak (UW): Exactly the same routine to Roberson, little step back on the dismount. If they go higher than Roberson for that I’m gonna be a lil confused. 9.9 okay cool.

Hot hot bars rotation for Washington. Never going to be as flashy as some of the top teams but if the Huskies hit every handstand and stick most of the landings, they can beat them anyway. Utes still doing well, just a touch lukewarm but it’s all right, they still likely don’t need to bring their best to win this one.

Paulson (UU): Double pike, front lay front full stag leap a touch too much power. Switch switch full, really impressive. Aren’t too many athletes who can get that one so well. One and a half front lay. We got this wonderful shot of a few teammates with ice bags tied to them coming over to congratulate her, the screen was like half ice. 9.85

Washington (UW): BHS LOSO with flexed feet but steady. Side aerial, not quite right, worked out. Switch side straddle straddle. She has a jump connection out of the side aerial and the second straddle is her backup for when she misses it. Side aerial tuck back full stuck. 9.925

Hoffman (UU): Double lay, big but underrotated, big rebound and I think put her hand down. It was very quick. Switch side Popa wolf full, lovely positions. One and a half front lay. Sucks, she looks devastated. 9.1

Nelson (UW): Candle mount to split, so special and unique. BHS LOSO a little tentative but works out of it. Split split 3/4, full turn, one and a half twist stuck. This rotation is SHARP. 9.9

Randall (UU): Double back, good, GREAT leaps, double pike. Landing a little hard but she’s working through. One and a half front lay, a little awkward on the landing. 9.875

Copiak (UW): Full turn, BHS LOSO, little check, cat leap switch half to beat. Her switch half is so good, side aerial tuck back full stuck. 9.925

O’Keefe (UU): Double pike, scoot back, tour jete full great. One and a half front lay with lovely height. I love her on floor in college, great presence. 9.9

Soloski (UU): NAILED the double lay, switch half split full great. This may be my favorite routine in the country. Front lay front full, little bouncy out of it. The swim choreography is my LIFE. One and a half front lay. Love.

Roberson (UW): Switch to switch split jump to split, a TOUCH slower than her usual but fine, full turn. LOSO LOSO great, turns out the front foot which I’ve never been clear whether it’s allowed? stuck the gainer full. 10 they had to after the rest of that lineup tbh.

Reinstadtler (UU): PRESSURE after the fall earlier. One and a half front lay, switch tour jete full. Bailed the rotation out and should feel great. Wait 9.975 lol the judges are SO HAPPY I was thinking maybe a 9.85 for that.

Judges are SILLY but it’s pretty much the fun kind. I’m having fun, anyway.

LeBlanc (UU): Switch split 1/4, BHS LOSO very steady. Front aerial to split, little adjustment in the middle, scooted her feet around. Full turn, one and a half twist with a step forward. 9.825

Utah has a lot of borderline deductions that are just leaving the door open a TOUCH.

Ruttan (UW): Two and a half twist, crossed feet, good landing. One and a half Barani to split, cat leap tour jete full and turns out of it so quickly that it sort of looks like she was attempting a 3/2. Double pike, lifts the front foot a little. 9.825

Cunningham (UW): Front through double back, great. Switch half wolf full wolf full. Double pike, little step back with her front foot. Still a good routine but could have been huge. 9.9

Isa (UU): Kickover front, BHS LOSO great. Had a stream hiccup but looks like she got through the rest clean. 9.95! Turning the temperature up.

A fun thing that keeps happening is they have the floor mic turned up way too high so that whenever someone tumbles it drowns out the commentators.

Paulson (UU): First routine after a 10 can be a mental killer but she seems so resilient. Side aerial LOSO, switch split. Full turn, side aerial back full stuck. Wow, should be so proud. 9.95

Hoffa (UW): Full in, kind of on her toes, hop to lunge. Front lay front full great. Tour jete half wolf full. Double back, another hop to lunge, it’s in the judges’ hands whether those were underrotated… looked okay but she definitely could have closed the door harder. 9.925

Wow. That was cracky and correct and fun and ridiculous and just a lot. I’m tired but happy. First Pac-12 loss for Washington and Utah is STILL undefeated. This is Tom Farden’s 100th win and they threw him a fun little streamer party in a corner, which was precious.