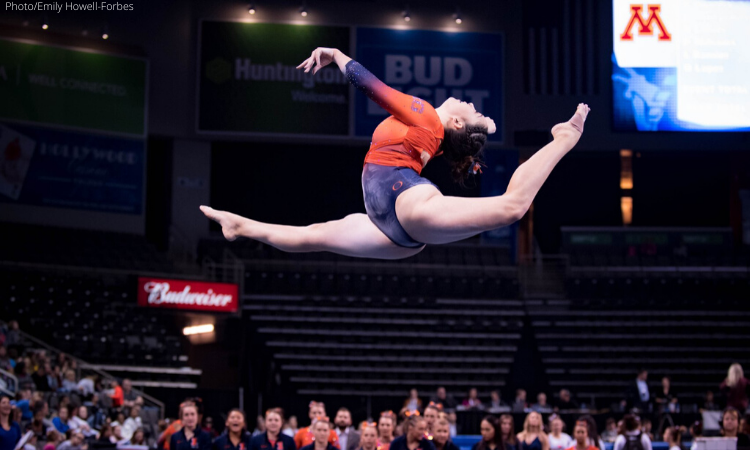 This meet is a fantastic opportunity for gym fans to watch two teams that tend to get overshadowed, and I am excited to see them face off today!

Illinois is coming off of a season-high  performance at Big Fives last weekend. Overall, it was a fantastic meet for the Illini: They recorded season high totals on vault and bars, and standout freshman Mia Takekawa made her return to the beam lineup for the first time in three weeks. The goal here will be to build off of that momentum and record a similar team total.

Central Michigan had a strong showing against Bowling Green last weekend, but, generally speaking, has been performing below its capabilities all season. A big road score would be huge for the Chippewas, who are currently looking to move up in the rankings into a regionals play-off position. The end of the regular season is fast-approaching and they are running out of opportunities to boost their NQS.

Vault will be a key event today: It is the Chippewas’ strongest event and one where they will potentially be able to establish a lead. Conversely, it is the Illini’s weakest event, but they put together a really strong rotation last week; if they can repeat that performance here, they are setting themselves up for a nice score.

Waiting for this score link to reflect the correct meet…

Kotas (CMU): Toe on piked tkatchev into a bail, good. Short on the last handstand, blind full into a double back dismount, pretty much sticks it but with a big lean back so we’ll see what the judges do with that. 9.775

Johnson (CMU): Slightly short on her first handstand. Giant full into her tkatchev, little short on the cast. Bail was nice. Little short on final handstand it looked like FTDB dismount, looked stuck. 9.775

“Was that the best bar you’ve seen so far?” asks the male commentator. Hmmk.

Williams (CMU): Great first handstand. Giant full into an absolutely MONSTROUS  Tkatchev, holy hell. Messed up her bail, unfortunately, because I am SHOOK over how high that Tkatchev was.  9.325

Meeks (ILL): Really crooked on her FTY and she lands short and puts her hands down.

I don’t know what is in the water at Central Michigan, but let’s take a minute to appreciate how HIGH those tkatchev releases were. The Chippewas will be happy with that bar rotation and have a nice lead going into vault, which is their best event.

Biondi (ILL): Had some stream issues and missed most of Biondi’s routine, but  blind full double back dismount stuck 9.775

Johnson (CMU): FTY, pretty in the air, tiny hop. Little crooked off the table though. 9.825

Powe (ILL): Short on the first handstand. Blind half into a jaeger with piked feet a little close. Short on final handstand FTDB dismount, step forward.

DeMers (CMU): Beautiful FTY, looked stuck at first but side camera angle shows a tiny hop. We’ll see what the judges do with that. 9.850

Howell (ILL): Piked jaeger was good. Pak salto had some leg separation and her hand slipped but she had a nice save there. Blind full double back dismount stuck. 9.900

Takekawa (ILL): Blind half into a piked jaeger with pointed toes. Beautiful bail to handstand. Last handstand looked good. DLO dismount, tried to hold the stick but shuffled her feet. 9.825

THIS MEET IS CLOSE. Central Michigan left some tenths on the table after that vault rotation, with mistakes from Pedrick and Demarinis. Illinois had a wonderful bar rotation, recording a season high 49.250. The Illini take the lead by less than a tenth of a point going into the third rotation.

Fettinger (CMU): 2.5 punch front first pass that I didn’t see because the camera was on Illinois. Wolf 1/1 looked good. Leap series was pretty. Commentators currently discussing whether or not you can compare floor routines to figure skating based on personality. Double tuck with a bounce step back to finish. 9.775

Demarinis (CMU): double back to open, nice landing. Really nice leaps. Double pike, landed with her chest low and takes a step forward. RO 1.5 front layout, nice. Minus the low landing on the double pike that was a great routine. 9.825

Williams (CMU): double pike to open, way too much power bounces way back but mayyyyybe stayed in bounds? Hard to tell. Front full to front layout second pass, shuffled her feet on the landing. Beautiful double back to finish, stuck it. 9.725

Pitchell (CMU): Big double pike to open, kind of a funky landing but she covered it well. Front layout front full looked nice. Double back to finish, goes out of bounds.

Simons and Jones exhibition on beam for Illinois, and I didn’t catch the name of who did exhibition on floor for Central Michigan

Central Michigan pulls ahead of Illinois after the third rotation, with a strong floor rotation compared to a lackluster showing by Illinois on beam. I don’t know about you all, but I am at the edge of my seat going into the final rotation.

Noonan (ILL): Front double full to start, step to the side. Front layout to a rudi, good. Switch ring was pretty. 1.5 to front layout to finish. 9.900

Biondi (ILL): Double pike to open with a big bounce back. Front layout front full, did not get much height there at all I’m impressed she saved that. Double back to finish and almost goes out of bounds but I think she stayed in. 9.800

Howell (ILL): Front tuck step-out through to double back, lands short and takes a step forward. Leap series looked great. Double pike to finish, lands weird and shuffles back out of it.