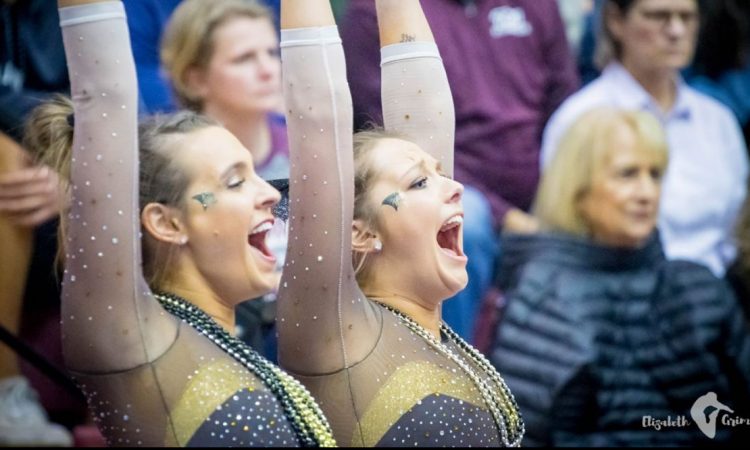 This was a quiet weekend in USAG action as two teams took the week off, and the relative lack of big scores is in line with an overall lower-scoring USAG season at the top level. Lindenwood, Bridgeport and Yale all have average scores around a point lower than they did at this point last year. There were also no ranking changes in USAG this week, but NQS is just around the corner and we’ll be breaking down the potential changes next week will bring.

Kaziska matched her career high on floor at the GymQuarters Invitational on Friday. Kaziska is the core of a SEMO floor lineup that has been instrumental to elevating the Redhawks into contention to qualify for USAG nationals as a team this year—and she has every chance of repeating as a regional qualifier as an individual.

Best Artistry of the Week

Carswell, previously a beam specialist for the Falcons, stepped into the floor lineup in the place of injured teammate Tyler Davis. While Carswell is still settling into her tumbling, the presence and flexibility that makes her so special shines just as brightly in this beautiful routine, and her difficult dance skills are great, too.

*Penn chose not to contend for the USAG national championship this year.

The Big Storyline: As in its last meet, Lindenwood’s floor issues depressed its team total. Lindenwood isn’t putting the pieces together nearly as quickly as in previous years. After an early season bars crisis, that event has recovered and is in decent shape, but floor is now a crisis zone. It was a great day for all arounder Ryan Henry, who scored a 38.925. Freshman Sydney Lopez came in a few tenths behind, only a few weeks into her college all around career.

The Big Storyline: It was a much better meet and a satisfying season high for Lindenwood, which finally scored over 194 for the first time all season despite a dearth of very high individual scores. Critically, floor recovered on Sunday, with six strong hits totaled 48.775. In fact, the whole meet featured only one fall for the Lions. If the Lions can maintain this consistency while key gymnasts like Courtney Mitchell and Katie Bailey register the 9.850-plus scores we have seen at other points in the season, it should be easy for Lindenwood to register its first 195. Seattle Pacific and Centenary, like Lindenwood, came to St. Charles from the GymQuarters Invitational and showed signs of fatigue. Seattle Pacific had a very challenging beam rotation, dropping almost two points from Friday’s great showing on that event. Centenary also stepped back off the pace a little on beam, but seems to be in a groove this season.

Implications: Lindenwood holds steady at No. 1 in MIC and USAG and No. 48 nationally, but when NQS kicks in next week, Bridgeport is projected to overtake it unless it puts up another big score—so game on, Lindenwood. DIII Centenary is capable of overtaking DI Cornell next week when NQS kicks in.

The Big Storyline: This was one to forget for Bridgeport, with misses on beam and uncharacteristically (and controversially) low scores conspiring to produce a disappointing third place finish. For the Pennsylvania teams, though, it was a great day. Penn soared on floor to beat last week’s season high by a tenth, with help from a spectacular floor routine by freshman Rebekah Lashley. West Chester returned to form, matching its amazing first meet total and setting a season high of 48.475 on bars. Bars, historically a weak spot, has been growing steadily for the Rams—they’ve just got to stay consistent on vault and bars to take advantage of it.

Implications: Being able to drop its 189 when NQS rolls around will be a welcome relief to Bridgeport, which is positioned to move into No. 1 in USAG at that time.

Records: Jessica Meakim’s 38.925 in the all around is a career best for her, and could have gone even higher if not for a slightly shaky beam.

Controversies: Bridgeport was not happy in the slightest with the scoring at this meet. Numerous athletes scored several tenths lower than usual for hit routines, and per the broadcast, Maya Reimers was inexplicably awarded a 9.9 SV for her extremely difficult floor routine. (There was a subsequent conference over this score; it’s unclear whether the SV was changed, but the final score of 9.800 was below her standard.)

The Big Storyline: Texas Woman’s put up a meet here that was fine on a grand scale, but a big step down from its pair of 195s last weekend. The Pioneers counted a fall on beam and scored slightly below their best day on floor, but continued to excel on vault and bars.

Implications: Texas Woman’s will drop one spot in national rankings, but stay level within USAG.

The Big Storyline: Yale picked up a decent, if not special, score that became their 2020 road high in Pittsburgh despite a large-scale bars disaster. Three gymnasts missed their bars routines, but luckily other events shone for the Bulldogs, who tied their season high on beam. Jade Buford continued a year of stellar all around results with another strong total.

Implications: Yale drops a spot to No. 54 in national standings.

Controversies: Scores were a touch low on bars across all teams. Raegan Walker fell on her bars dismount by unfortunately stumbling off the end of her eight-inch landing mat, which is uncommon in college.

The Big Storyline: While losing a gymnast to injury is always sad, it’s also interesting to see how a big team adjusts to a the absence of a major player, and Air Force continues to thrive even without Tyler Davis. Briona Carswell stepped into the open spot on floor and scored a great 9.750, while Amber Boll set a career high 9.900 on beam to elevate that lineup.

Implications: Air Force is in a good place nationally, but it desperately needs a good road score next week to be in a healthy place for NQS, since one of its prospective road scores currently is a 188.

The Big Storyline: SEMO’s imperious floor lineup led it to a win over two USAG opponents and yet another strong road score. The Redhawks registered a 48.900 on that event and also picked up their second-highest beam score of the season. Seattle Pacific lost about a point from its last two scores, dropping the pace on vault and bars, but also excelled on beam. Centenary picked up its best road score of the season and got an individual title from senior Cami Bea Austin, who has excelled on her three events all year.

Implications: With a strong meet next week, Centenary can pass Cornell in the inaugural USAG rankings.

Controversies: Scores on floor at this meet were glacially slow.

The Big Storyline: It stings for Cornell to lose to a Division III opponent, but it’s in line with the season the Big Red has had. Floor scores are starting to pick up, luckily—the Cornell we have known in past years can score 49+ easily on that event—but bars continues to be a sore spot, and vault isn’t a great deal better.

Implications: Qualifying as a team to its home USAG Nationals this year seems very far away for Cornell, and when NQS begins next week it’s in danger of being overtaken by Centenary and dropping to last place in USAG rankings. 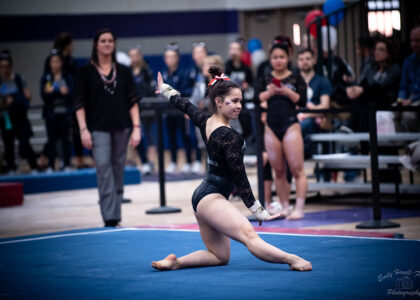