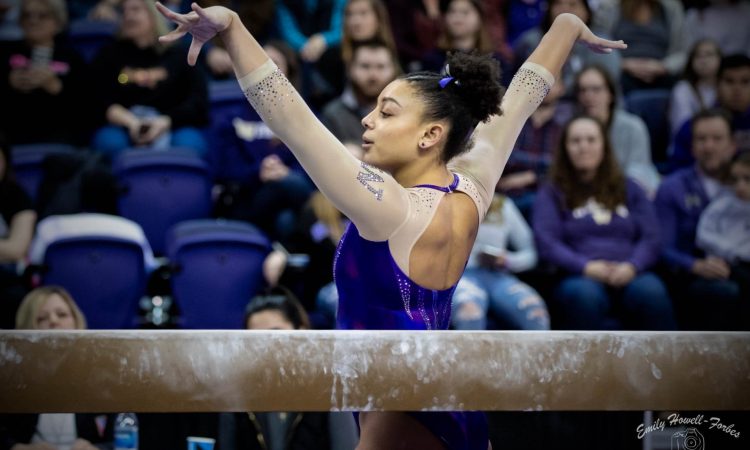 These two teams match up in an interesting way because they’re two of the great revival stories in the country this year. While both were far from poor last year, they were both sort of listless, lacking panache and competitive ability compared to the teams they wished they could compete against. This year, everything is different. Though neither team has a massive influx of freshman talent (in Washington’s case, zero routines…don’t worry about it) the energy seems transformed, and routines that were forgettable last year are now worth a second look.

Washington, as ever, has a serious and worsening vault problem that it will have to weather in the first rotation if it wants the meet to go anywhere. The Huskies’ only 10.0 vault, from transfer Allie Smith, dislocated her ankle last week. That leaves them with five reliable if not typically high-scoring Yurchenko fulls and…who knows what in the anchor. Last week, the nod went to Brenna Brooks, who is massively improved on her other events after an injury-marred freshman season but couldn’t land her Yurchenko half on, tuck off. Washington has two other theoretical 9.9 start options besides Brooks, or it could scratch her in the anchor if the first five land feet-first. None of those options are very palatable, of course.

Arizona doesn’t really have a “wow” event, so it needs to avoid having a “yikes” event. (We do serious analysis here at College Gym News, folks.) A team like Arizona has a decent shot of beating a team like Washington by positioning itself well and being ready if the bigger team slips. If the Wildcats can keep more of its mid-lineup routines above 9.800 than below it across four events, they should be very happy.

A fun thing is that the live stats are broken! I’ll get what I can from the commentary.

Well, Brooks remaining the vault anchor for Washington. We can be afraid together!

Leydin (UA): Toe on to Pak, a little flat with leg separation. Blind to Markelov, a little messy, blind full double back with two steps. 9.725

Hendrickson (UA): Blind to Jaeger to overshoot, little bit of leg form but clean catches, FTDLO a little low with a big step back. 9.725

Roberson (UW): She’s won the all around at four of her five meets this year. Pretty FTY with a small hop back. 9.85

Thompson (UW): STUCK FTY! So lovely, legs a little closer together than her usual. 9.925, wow! So rare to see vault scores like that in Seattle.

Kane (UA): Late blind to Jaeger to overshoot, wider straddle than you often see and it’s pretty. Blind to double front with a step back. 9.775

Brooks (UW): Omelianchik, often can’t keep her legs straight but… STUCK IT. Definitely tucked for most of the flight, they could downgrade to a 9.9 start and no one could complain but WHAT a landing. 9.825 is a big deal for her.

Berg (UA): Blind change to pike Jaeger to overshoot, so clean, weirdly travels to the side in the air. FTDB and leans to hold the stick, can’t see whether she managed it. 9.85

I’m doing my own math, kids! Hopefully I didn’t mess it up. Great start on vault for the Huskies! Two sticks at the end feels great. Tight scoring for bars I think, but we’re watching it end-on so I really can’t tell a ton.

Washington (UW): Clear hip to Gienger to overshoot, slight arch on a handstand on HB, FTDB with messy legs and a step back. 9.75

Swanson (UA): Good FTY, landed with her feet apart and chest a little low but close to stuck, tiniest hop in place. 9.775

Thompson (UW): Blind to Jaeger, not the prettiest but clean, good bail. FTBD dismount really clean, really pretty with a little step back. 9.775

Leung (UA): Arizona vaults are so technically strong today. Similar to Hargrove with the same hop back. 9.775

Roberson (UW): Hop change to pike Jaeger to overshoot, drilled the double layout. Her bars has been ON this year. Money gun engaged for that one. 9.875

Bellows (UA): First one and a half since her comeback and sits it. Next time. 9.2

Nelson (UW): Blind to Jaeger to overshoot, clean and pretty, elbows buckled a touch on the overshoot, blind full double back stuck. 9.85

Zaza Brovedani in the exhibition for FTY, I didn’t see her sister there running to high five her so does anything matter?

Actually not much distance between these two now after the Washington counted fall. Washington can still scrape a 196 out of this with a good hit on its other events. Geneva Thompson won vault, Evanni Roberson won bars.

Looks like Michaela Nelson might do beam instead of Meghan Ruttan today. Let’s hope Nelson has a beam dismount now, which she didn’t last we saw her in the exhibition!

Orman (UA): Front lay to Rudi, leg separation and an awkward landing. Her choreography is really unusal and I really like it. Double pike, switch side Popa with a foot shuffle. Good one! 9.775

Washington (UW): BHS LOSO, little leg up check. Side aerial to straight jump, switch side to straddle. Full turn, side aerial tuck back full with a little scoot. 9.775

Davis (UA): Front double full landed very securely! Rudi to stag leap, huge rebound but keeps control of it, tour jete half Popa I think. One and a half front lay, slightly awkward landing, looked like her foot caught in the carpet as she tried to step but it’s minor. 9.775

Nelson (UW): Wow, candle mount but catches in immediate split. I’ve seen photos of it but never in action, I don’t think. BHS LOSO landed with a wider pace than most but secure. Split leap split 3/4, slight question on the splits, full turn, one and a half dismount stuck. That was fantastic. 9.875

Cowles (UA): Double back, immediately rolls back. By the amount of tape I suspect her legs mostly don’t work, so there’s a lot to be said for falling safely. Front lay front full, great leaps. Per the commentator Alisa Mowe, she has a cat named Cat. Rudi with a jump back. 9.075

Hargrove (UA): Nailed the double pike, whip half front full with a slightly larger lunge. She’s so charming and fun to watch. Switch ring tour jete half, questionable split positions, double back underrotated and scoots back. 9.775

Vandenkolk (UW): Kickover front BHS so clean, switch to split 1/4. Beat jump, full turn, front aerial swing through to scale is the cleanest I’ve seen her do it in college. Gainer full with a little lean to hold the stick. Great one. 9.9!

Berg (UA): Front double full nailed, I love when athletes lunge properly out of those instead of arabesquing or dancing. Good leaps, one and a half front pike, Rudi to split and bounces around in a circle for some reason.

Roberson (UW): Switch leap switch jump split, LOSO LOSO great—in the past she’s had leg form on that series sometimes, this year it’s been reliably clean. Gainer full dismount stuck. Her best routine. It’s so well-constructed, too. Bonus packed into two combos and the dismount so that she doesn’t have to mess around with anything else.

Sorry Heather Swanson I’m in a complicated place right now. Good two and a half, underrotated her double back. 9.65

Washington still going to manage a pretty good score here despite the bars falls if floor holds together. Good outing for Arizona on floor too and it’s a rotation I just like to watch so much.

Hendrickson (UW): We were focused on her upper body so I couldn’t tell what her leap series was but she didn’t fall on it! BHS LOSO pretty and secure, full turn, paused in the middle of a combination the start of which I missed… beat Korbut. Gainer full with a scoot back. 9.7

Brooks (UW): Double front, step forward and flirts with the line but she’s in. One and a half front lay, great landing. She’s become quite a performer, came across much more reserved last year. Switch ring, tour jete half. Front lay front full. 9.85 brings her to 38.650 in an all around set with a fall, not bad.

Leung (UA): I always see Leung and Hargrove together and they always seem to be together in lineups, too. Makes me smile. BHS LOSO, switch + switch tentative on the splits, nice full turn. Switch half to beat, nowhere near split, cat leap side aerial back full. 9.8

Thompson (UW): Her floor debut in 2020 after some calf soreness kept her out. Double back, big rebound back and an OOB. Front lay front full and dances out, tour jete half switch half with unusual technique. It’s a switch leap with a half turn out, not turning in the middle. Rudi to Shushunova is great. She’ll get the first pass, I’m sure. Tons of potential here. 9.675

Z. Brovedani (UA): Odd landing on her leap series, front aerial back tuck with a little check. Full turn, tentative again, switch half to split and it’s one of the better switch halfs you’ll see. One and a half with a big hop forward.

Washington (UW): Scores were going high before the Thompson OOB, Washington is one who’s very capable of getting the momentum back. Double back, slides back, she struggles to control that one from time to time. Front lay front full, great control, double pike with a tiny sideward movement. Leap series to finish and her straddles are, as always, something special. Good one. 9.85

Cowles (UA): Cat leap front aerial, bend check, split jump with a check of its own. Hopefully she doesn’t need that connection for her SV. BHS LOSO great. Switch split, tentative positions and a leg up check. Aerial walkover 1/1 dismount, holds it for a second and hop back. 9.45

Roberson (UW): Another really, really smart routine. Front double full front tuck, step back. switch ring wolf full is slightly off in the middle but gets both of the leaps fine. Rudi LOSO with the tiniest shift of her back heel. Good one. 9.925 and an AA career high!

Davis (UA):  BHS BHS LOSO great, little check on her leap series, kickover front to beat feels a little low. One and a half dismount with a scoot back. She’s had such a renaissance this year. 9.875

Hoffa (UW): Full-in, nailed it. Front lay front full and dances out. Little bounce out of the tour jete half wolf full, lovely landing on the double back. Great, great finish for the Huskies. 9.9

Hilariously this is actually a pretty solid NQS score for the Huskies despite the counted fall on beam. But what a night for Evanni Roberson. If she doesn’t get Pac-12 Gymnast of the Week I’m gonna have WORDS.