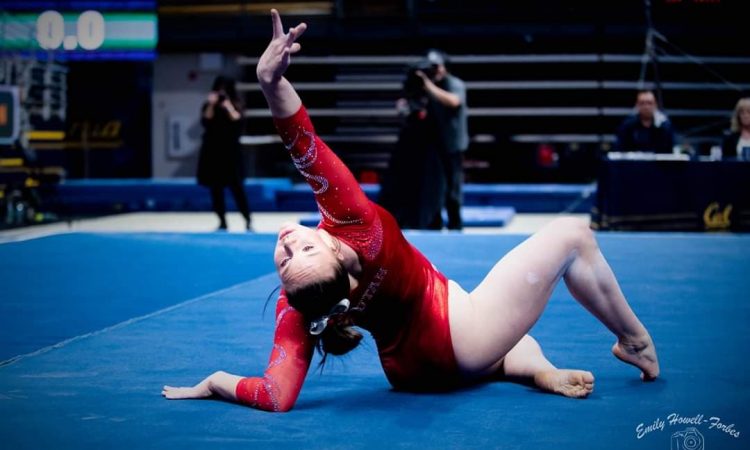 NQS hasn’t kicked in yet, and we’re already impersonating the smiling-but-sweating emoji looking at Oregon State’s numbers—because the Beavers have two 194 scores on the road this year and only three chances left to replace them, including today. It’s not seriously likely that Oregon State will go into regionals still averaging a 194 in, but it does put pressure on this week and next because at least one of these scores is guaranteed to count, so it needs to be great. The Beavers still have big problems on both vault and bars, and I’m looking for signs of improvement on at least one to prove that there’s a future in this season.

Meanwhile Utah just keeps chugging, looking better and better each week. Its 49.625 beam rotation at Cal last week was only a quarter tenth short of a program record and shows that the demons of the last few years on that event are well and truly exorcised. The last time Utah got a new team program record on any event (or the team total) was 2004. Wouldn’t it be something if it happened again this year? There’s still room for the Utes to grow on vault, but at this point it doesn’t feel like a very big deal.

Utah is also undefeated on the season, which at this point in the season means there’s a target on its back because anyone would love to be the first loss. It’s not impossible today, but a lot of stuff would have to happen.

GREAT leotards today. Utah in the mountains, Oregon State in the plain black with vertical stripes on the back.

Soloski (UU): A little soft on the table but flares it out despite not having a ton of height, leg sep at the end, little hop back. 9.825

Yamaoka (OSU): Question on the first handstand, Maloney with little leg sep, toe on to bail. Amanda says more handstands are iffy, hit the KCH on the high bar, late blind full double back with a hop. 9.725

Hall (UU): One and a half STUCK. Little issues on the table and one foot ahead of the other on the landing but very much able to go high. 9.925

Lowery (OSU): Toe on to Maloney to Pak, leg sep throughout, missed a handstand on HB. Double lay flung out, close to stuck with a one leg behind. 9.8

Bird (OSU): Stalder, late, to bail. Late on a Tkachev, awkward muscly cast out due to an odd catch angle on the release. FTDB good and close to stuck. 9.8

Minyard (OSU): Hop change to Jaeger to overshoot, handstands are okay not great, DLO and isn’t really on top of it but manages to avoid taking a step. 9.825

Tessen (UU): Very pretty one and a half, right on the landings, pulls heels together but keeps the toes down. 9.95

Gill (OSU): Missed the first handstand, toe on to Maloney, not really enough swing, to Pak flat with a big leg separation. Double layout, bounce on her toes. Fine, good to get a hit, but not special. 9.9 okay haha

That vault rotation was MASSIVE for Utah. It’s a season high by over two tenths. Also a season high for Oregon State, which got the most it could out of that rotation with a lot of sticks even though the technical issues persist.

A fun story about this Utah leotard is that once somebody messaged us to ask how they could get one to frame in their house as a show piece “no matter the cost” because they loved it so much.

Peterson (OSU): Yurchenko full on, pike off WAY back on the table, decent distance, hop back. 9.775

O’Keefe (UU): Toe on to Maloney to Pak, good, shy on a handstand on HB, double arabian overrotated with two steps forward. 9.725

Baby Hendrix Marsden is here in Greg’s lap in headphones which is CUTE.

Yanish (OSU): Video lagged but she got a 9.850. Oh, there we go! Pretty FTY, her usual lovely flare, scoot back. She can rebound back majorly there so good to keep the deductions down.

Tessen (UU): Blind to pike Jaeger, a little close and slight break on the catch, got the bail. ON the handstands. FTDB with chest down and a step forward. 9.85

Good meet for both so far, but not the icy landings that the Utes produced on vaults. Tom Farden says that this week, they took a step back from routine shape to focus on technique, which could explain it. (Meanwhile Alexia Burch photobombed him, which was great.) Oregon State is still… fine. These first two events are improving slowly but there’s a lot of pressure on floor now to produce a good total.

LeBlanc (UU): Switch split 1/4, one foot sorta crunchy, BHS LOSO with a lean check. Front aerial to split is lovely, full turn, one and a half dismount and looks like her weight is forward but she holds the stick. 9.875

Peterson (OSU): Double back, a little low, lands wel. Front lay front full. Apparently this is the event that Mandi Rodriguez is working with-she’s stepped in as a temporary coach while Tanya Chaplin is out. Nice leap series, double pike and doesn’t really open it up, overrotates with a big step back. 9.775

Bird (OSU): Front lay to Rudi, messy legs, rebounds into a leap. Switch half split full pretty good. Two and a half with leg form again but solid landing, steps across in front. 9.8

O’Keefe (UU): The walkover over the beam fron the side is lovely. Nailed the side aerial LOSO, switch split, her leaps are so satisfying. Full turn, cat leap side aerial back full stuck. 9.975!! Not even mad.

Force (OSU): Nailed the double pike, switch half Popa. Nice and secure landing on her middle pass which I forgot to write down, chest down on her double back and scoots a little forward to lunge. 9.85

Randall (UU): BHS LOSO great, beat sheep with legs apart but hits it. Orphan sissone, Rulfova, got the dismount. So pretty, so steady. 9.925

What if this is a program record?

Lowery (OSU): Comes in a little flat on the front double full but landed it well, one and a half front lay stuck. She’s uncanny with that. Tour jete half Popa, stuck the Rudi again. 9.9

Paulson (UU): Side aerial LOSO, misses the back foot and steps in front, no check. Switch split, full turn, beat jump side aerial back full with a HOP. Ah, could have been so good, but that’s the sport. 9.775

Yanish (OSU): Double lay, OVERROTATES IT, I’m literally furious. This girl has blown so many 10s that the judges were willing to give her by overrotating one of her double saltos. I remember maybe two routines in her whole career where she actually got them. Fine second pass, switch side Popa, overrotates the double back too. It’s small potatoes deductions, but she just can’t keep that front foot planted. 9.9 is generous with both of those landings poor.

Oregon State on track to a really good total, which is great news. Floor scoring was a little cushy after other events looking pretty sane, which means that Utah could push very close to 198.

That Utah beam rotation was unreal and the scores weren’t even unrealistic. I would have gone higher for Paulson than the judges did. The program record is only 49.65 and there’s every chance of that falling this year.

Davis (OSU)L Front aerial back tuck, very steady. Split double stag, oh, something went wrong with her aerial walkover 1/1 dismount. Underrotated with major leg separation, didn’t get the lift off the beam that she should. 9.8

Isa (Utah): Double back looks a little low but landed securely, one and a half front lay with good rise. Switch side Popa lovely. Double pike, underrotated, big step forward and hilariously slides into the splits. 9.15

Lowery (OSU): BHS LOSO, foot and knee form, never makes good contact and jumps off. Switch split straddle quarter really nice and she looks a bit happier. Side split 1/2 is a little short. Cat leap side aerial with a tiny adjustment, front full twist with a hop back. 9.2

Paulson (UU): Double pike, lands with feet a touch apart but lunges out well. Front lay front full to stag well done, switch switch full! Her leaps have different dynamics to a lot of gymnasts, not rushing onto the positions but hitting them well. One and a half front lay is good. 9.85

Domingo (OSU): Front aerial back tuck with form and a step back. Switch to straddle is pretty, plus something with a quarter turn, missed it. Full turn, NAILED the gainer full. Good recovery! 9.875

Reinstadtler (UU): Lovely airy double back, switch ring tour jete half. Missed her first floor routine this year but looking good today. One and a half front lay to pique arabesque disguises the fact that it’s a little overrotated. Turning double stag leap is beautiful. Underrotated double pike and fell forward. Same mistake as before. 9.275

That SUCKS. Can Oregon State sneak in here?

Randall (UU): Double back, underrotated, double pike with chest down and manages a tiny step back, got the combo pass. 9.825

Sorry, I’m still thinking about a fall on a gainer pike. Never seen that one before.

M. Dagen (OSU): BHS LOSO, a little off but works through well. Switch switch half to beat jump, nowhere close to split, side aerial back full stuck. Take a lot of nerve to hit like that just after your sister went down. 9.9

Lazaro (OSU): BHS pikeout, big bend check and swims but gets it back. Switch split straddle 3/4, good, full turn. Side aerial back full with a scoot. 9.725

Soloski (UU): This is my favorite. Her usual slightly whippy double lay but good landing. Tour jete half split full is emphatic, front lay front full and then a weird junky stag that didn’t take off properly. One and a half front lay, airy and beautiful. 9.9

Well, this wasn’t the pressure valve NQS score that Oregon State wanted. It isn’t a bad total, but a counted fall is a counted fall. Utah will also probably want to drop this, but it at least has more opportunity to do so. Can’t be mad about remaining undefeated after a stumble like that. Just weird dynamics from both teams on events that are usually strengths.