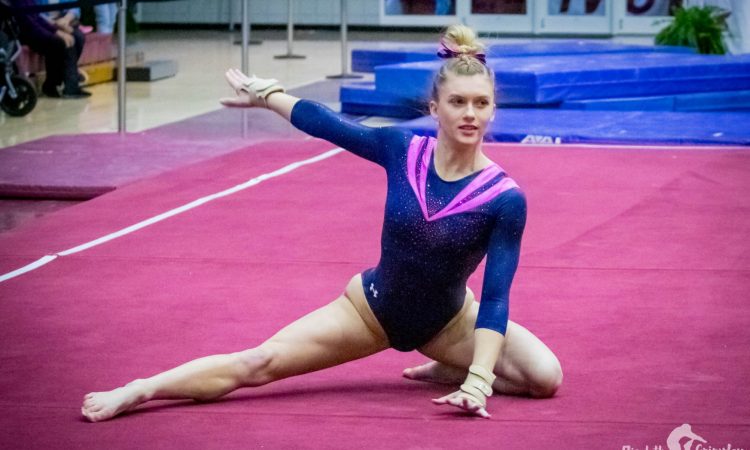 Florida has shown no signs of stopping in its 2020 campaign, posting its three biggest totals over the past few weeks. Another 198-plus score tonight, though never guaranteed, is an intriguing possibility that would allow the Gators to count what is currently their only score in that range. Helping the Gators’ momentum has been Trinity Thomas, who has two 10.0s in three weeks. Both of those were at home, so it will be interesting to see if the away judges in Auburn award her efforts tonight.

Auburn, though consistent, has been stuck in the mid teens of the rankings. The Tigers will look to score a season high tonight so they can count a 196.700 from a few weeks ago; given the home atmosphere and a hit, that’s a reasonable expectation. It would be even more reasonable with a hit meet from Derrian Gobourne; though she’s known as a floor queen, she’s had two lowish scores on the event in the past few weeks. Of note, the Tigers have a lineup change this week (shoutout to this team’s prompt lineup updates!): senior Katie Becker will vault after competing just once on bars this season. She’ll go in place of junior Jada Glenn.

Gobourne (Auburn): 1.5 is really big but goes too far, overrotates and stumbles forward. These vaults are kinda all over the place, like my emotions on Valentine’s Day. 9.850.

Auburn definitely had energy on its vaults, but no landing control to match…hence some scores that were a little all over the place. Florida had some nice bars routines and quite the opposite control on its landings, which is nothing new.

We are on to bars next! #WarEagle pic.twitter.com/31UTNYZNZN

Looks as though Nya Reed will still not be vaulting tonight.

Gobourne (Auburn): A little off on the mount apparently, I ws looking away… Tkatchev good. Stuck double back. We’ll see what they do with that.

Nothing too terrible for Auburn on bars, but nothing WOW either. Would have liked to have the hit from Gobourne, because after the mount it was really nice. Florida’s vaults were decent, with highlights coming from Richards and Alexander.

Here is our lineup for Beam! #WarEagle pic.twitter.com/ZBTPQqnt4O

Richards (Florida): DLO, small shuffle back, opening your lineup with an E pass, the ACCESS that has…switch half to Popa, pretty. Front tuck to double back, super high. nice. 9.825.

Slappey (Auburn): BHS LOSO, small check. Switch leap hesitates then tries for the switch half but she’s off and falls for the second week in a row. Tucked full dismount, small step. 8.950.

Gowey (Florida): Her music I really won’t ever be over this. Rudi to stag, pretty. Switch half to wolf full, good…Double tuck chest down. 9.850.

Johnson-Scharpf (Florida): Double arabian. Back 1.5 to front lay. Double back chest a little forward. Good one from her. 9.900.

A beam implosion for Auburn, but kudos to Sheppard for hitting that last routine. Floor was nice for Florida tonight, with everyone bringing the sticks and confidence in a tough away environment.

Final rotation up next! #WarEagle pic.twitter.com/5genizkJ0c

Stevens (Auburn): Double pike perfect. Switch ring to switch half. OMG she just looked into the camera, might be a little bit of a legend here. Rudi chest slightly down. Same thing with double tuck. 9.875.

Johnson-Scharpf (Florida): Front tuck, no hesitation! BHS LOSO leg comes up but she stays on. LOSO back full. 9.775.

Slappey (Auburn): Back 1.5 to front full. I love that these two teams have such dramatic music, very elite. Actually, this is Game of Thrones. Double tuck, stuck. 9.775.

Day (Auburn): Pretty double pike. This sounds like the music that plays in line when you’re waiting to go in the haunted house. Front full to front lay. 9.900.

Gowey (Florida): Switch leap. Slightly off on the aerial but stays on. 9.950.

Brusch (Auburn): Full-in, steps out. Back 1.5 to front lay wasn’t too high but lands on her feet, switch half to straddle half. Lands hands down on double tuck, too bad. 9.100.

Thomas (Florida): Switch leaps pretty. BHS LOSO. Aerial to beat jump to back swingdown, no errors there. Back full lovely. 10.000!

Looks like Derrian Gobourne will not go on floor. Says she’s fine. Subbing in is freshman Morgan Leigh Oldham in her career debut.

Oldham (Auburn): Sits double tuck. Back 1.5 to front lay, chaotic but on her feet. Same with double tuck. Auburn now counting a fall, but good she got experience. And the music was to Taki Taki. 9.050.

Auburn has another forgettable meet that somewhat mirrors its season debut at the Collegiate Challenge. Onto the next one for the Tigers.

Florida got an unexpected gift with Trinity’s 10.000 and a 24 for 24 meet yet again. The Gators no longer own the top score of the season as of a few minutes ago, when Oklahoma earned a 198.400 at home.