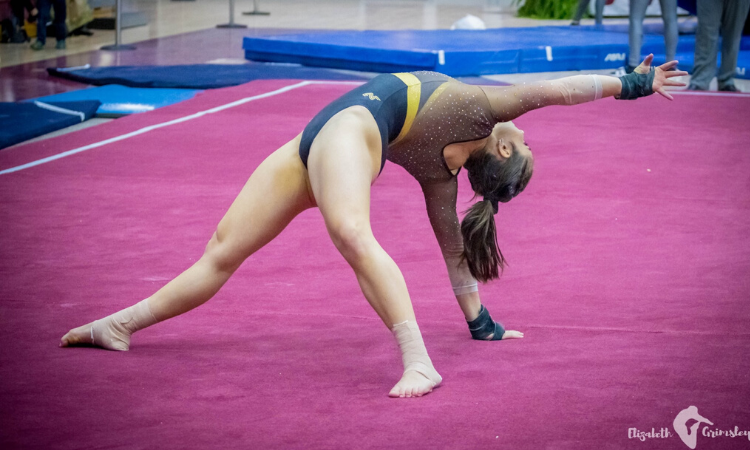 LSU comes into this quad meet limping but somehow surviving its numerous injuries. Senior all arounder Kennedi Edney has only competed two events the last two meets, and Sarah Edwards’ ankle injury has left the team shorthanded on vault and to a lesser extent floor. Without either of them, the vault scores in particular have suffered, with sub-49 totals the last two weekends. Edwards is unlikely to be back tonight, but I’ll be watching to see if Edney returns to her usual all around role.

Iowa State is on the fifth of six straight road meets and is coming off a season high performance at Florida. The bars lineup has been spectacular—watch out for January enrollee Jade Vella-Wright who has scored three 9.900s in a row, leading the Cyclones to a national ranking of 10th on the event. Beam has been the weakest event so far following the season-ending injury to Molly Russ, so I’ll be watching that lineup in particular.

Nobody has been talking about Missouri—it’s easy to be overlooked in the high-scoring SEC—but the Tigers have mid-197 potential if they can put together a clean meet. Highlights so far have of course included freshmen Helen Hu and Sienna Schreiber, but Hannah McCrary, Gabrielle Gottula and Morgan Porter have also shined during Aspen Tucker’s mysterious absence (surely she doesn’t still have the flu?). This is a dangerous team that can cause some upsets during the postseason, and possibly tonight.

By this point in the 2019 season Lindenwood already had three scores in the 194s and one above 195, but this year is a different story, and the Lions haven’t reached 194 yet. Last year’s star all arounder Courtney Mitchell was injured during the offseason and has so far been limited to bars and beam, but she added vault last week so I’ll be watching to see her presence in the lineups tonight. Freshman Gayla Griswold has had two stellar meets in a row with no sub-9.8 scores on her three events, so she’s another one to watch for.

As for the meet as a whole, I think either Iowa State or Missouri could pull the upset over LSU with a hit meet and a couple of errors from LSU. These neutral quad meets are often chaotic and unpredictable so I’m excited to see how it pans out!

The event is being streamed by Flo (I know, I know), and there is surprisingly a live scoring link available—we’ll see how well it works.

30 minutes from the start and no lineups yet…don’t they know live bloggers need lineups? Oh well, I’m curling up with a Pub Sub and a glass of wine and mentally preparing myself for Flo-induced madness.

LSU wins the race to release lineups first! Alas, it’s only the first rotation, but I’ll take it. Edney is back in the lineup, which is fantastic news!

March-ins happening now. Laura Cooke (ISU) is in a boot, and Makayla Maxwell is wearing grips after not yet competing bars this year, so that’s interesting. Aspen Tucker is present and looks fine, so we’ll see if she competes.

McKenna Kelley and Olivia Karas on the call. Should be fun. Still no lineups from anybody except LSU, so I’ll do my best to keep up, but the quad screens are pretty tiny so I’ll mostly be depending on the announcers…

Durante VT: HUGE Y-full, tons of distance but overpowers it and has to take a large hop back.

Missed somebody on bars for ISU who had a nice DLO.

Johnson VT: Stuck Y-double. Karas thinks it should get a 10. And she gets it.

Burns UB: Ray, overshoot, goes over on a handstand on the high bar. Doesn’t fall but still a huge mistake. 9.375

Edney VT: Great 1.5, perhaps a small hop on the landing but couldn’t really tell because the camera started zooming in elsewhere.

Griswold FX: Opens with a full-in, some leg issues in the air but a good landing. Missed second pass. Closes with a double tuck but sits it. Too bad.

Baze FX: Double pike is overrotated but she saves it with a large step back. Good double tuck. Nice extension on her leaps but has a bit of a balance check after landing the last one. Good combo pass to finish. Great routine! 9.725

Gottula BB: I didn’t see the triple series but she later fell on a switch half. Gainer full dismount, stuck.

Henry FX: Nice double pike, the lunge back was a bit uncontrolled. Double tuck, underrotated with a step forward. Back 1.5 to front layout, good.

Lopez FX: I think the first pass was a double tuck? It looked good regardless. Front full to front pike with a large step forward. Back 1.5 to front layout, good.

My live scores link isn’t working so I’m having to rely on the commentators and Twitter for scores, but now Twitter has stopped working for me too, so that’s fun. LSU tweeted out its rotation scores but so far crickets from the other teams…

Oh hey, scores on the stream! It’s safe to say LSU is glad to have Edney back.

Steinmeyer BB: Nice front toss to beat jump. BHS LOSO beautiful. Not quite fully horizontal on her leaps. RO 1.5 dismount with a lean forward but a college stick. 9.8

Johnson UB: Toe-on Shaposh to bail handstand. She has nice handstands. Great DLO dismount, stuck. For some reason the cameramen keep zooming in on the dismounts. 9.875

Sheremeta FX: Didn’t see her first pass, and she had an awkward straddle jump out of her second pass. Back 1.5 to front LOSO with some steps forward that she tries to play off as dance.

Turner BB: BHS BHS LOSO, solid. I missed a lot of the rest of the routine but she had a step on her dismount. 9.825

Gottula FX: Double pike, a bit uncontrolled on the lunge back. Front half layout to double full, nice. Not quite fully extended on lips. Then they cut away from the rest of the routine to show Durante’s dismount.

Boogerd VT: Low on the block but turns it into a solid Y-full with a hop back. 9.65

Shchennikova UB: Apparently it was a good routine but it wasn’t shown. 9.95

Harrold UB: Almost goes over after her Zuchold but somehow saves it. Good straddled Jaeger. Sticks her double front.

Palacios BB: Side aerial BHS, solid. A little low on her leaps. Cat leap to side aerial to back full dismount, a little piked but stuck. 9.875

Porter FX: Double pike, huge and well controlled. Back 1.5 to front layout (?), good. Double tuck with possibly a small slide back from her front foot during the lunge back but of course there are no replays so I could’ve imagined that.

Hu FX: Front double full, doesn’t quite get it all the way around. Back 1.5 to front layout, good. A little short of horizontal on her leaps. Wow, a ring leap in college, that was a surprise. FHS Rudi to close, beautiful.

In peak college gymnastics things, Mizzou has tweeted out a revised live scores link that’s literally a Google Sheets link. Also, raise your hand if you guessed LSU would be on track for a 198 after two rotations. Now, put your hand down, you liar.

Lopez UB: Nice Gienger but caught it too close. Great Pak! Short on last handstand and late on full turn going into the double tuck. Step back on the landing. 9.6

Bailey UB: Goes a little over on first handstand but controls it well. Straddled Jaeger to shootover is nice. Blind full to double tuck, stuck. 9.8

They’ve shown bits and pieces of ISU floor but not much.

Brandt VT: Front pike half with a couple steps back. 9.75

Durante BB: BHS LOSO, maybe a slight check but hides it well. Front aerial to split jump, not quite fully horizontal. Side aerial to back full, stuck. 9.875

Mitchell UB: Short on first handstand. Huge Jaeger with some knees. Bounced out of dismount a bit. 9.825

Burns FX: Double tuck overrotated a bit but saves it with a step back. Back 1.5 to front layout to stag jump, good. Good extension on her leaps. Double pike, low landing and has to hop forward a couple times to save it. 9.6

Johnson BB: BHS LOSO is solid. A little short of horizontal on her switch half. Front aerial is good. RO double twist, stuck. 9.925

Campbell: Has to take a step forward out of her full turn but doesn’t show a visible check. Good leap series. RO double twist, stuck. 9.9

LSU is absolutely cruising so an upset looks unlikely at this point. Iowa State had an amazing FX rotation and will gladly take that 49.350.

Bailey BB: BHS LOSO, solid. I heard the commentators say “nice save there” but didn’t see what it was on. RO 1.5 with a large bounce forward. 9.5

Schreiber UB: Really only saw the dismount, a stuck DLO. 9.95

Griswold UB: They only showed the end of the routine but it was good. 9.75

Johnson FX: Karas says the full in was good but we didn’t see it. Amazing back 1.5 to front layout, perfectly stuck. Double pike, stuck. 9.95

Edney FX: Huge double Arabian but has to take a hop back on the landing. Back 1.5 to front layout, beautiful and well controlled. Second leap looked a little short. Good double tuck to close. 9.925

Henry BB: I missed this routine because the announcers said it was an exhibition so I was looking up scores. But she got a 9.775 so it must’ve been pretty good!

Holy wow, a 49.4 on bars for Mizzou and they put up another mid-196 score. I know you’re capable of more, Tigers! I believe in you! Great meet for Iowa State as well with a 196.625 and a lot of real highlights for the team. And of course LSU will be smiling all the way back to Baton Rouge after that score, its highest of the season so far.

Also, huge shoutout to whoever at Missouri put together those live scores last minute. The gymternet appreciates you!