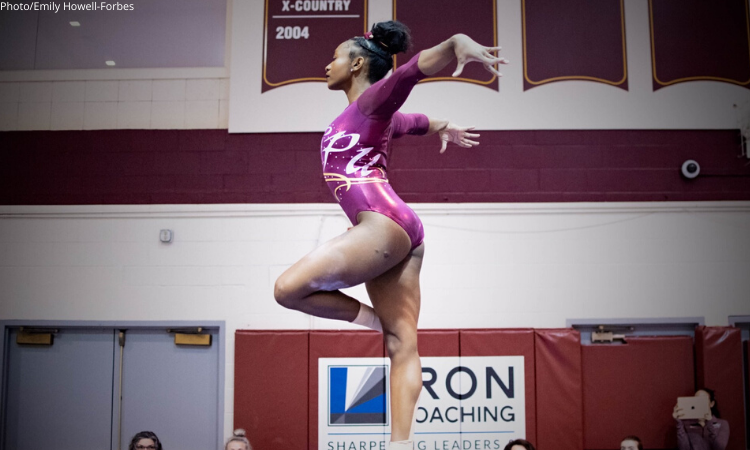 GymQuarters is always a fun time, and this afternoon session should be pretty fascinating. Centenary, the lone Division III competitor, is up against MIC foe SEMO and MPSF’s Seattle Pacific. Don’t count the Ladies out just because of their division; they have two consecutive 191s coming into this meet, totals that best a few of the Division II teams’ scores in 2020.

SEMO is a vastly steadier team this year, with the addition of a massive freshman class that is regularly contributing more than 10 routines. It hit a near-194 last week to topple Lindenwood. Seattle Pacific is also coming off a high 193 last week to squeak past Illinois State and Air Force.

Darian Burns is one of the strongest gymnasts in the division. Her 39.375 total last week is competitive with Division I all around numbers, and she’s on the radar for an outside chance at regionals. Any strong score at this away contest is great to have in the bag. (Last year’s lowest all around NQS for an individual qualifier was a 39.165.)

My good people, I just checked the schedule and march in begins at 2:00. First vault should happen at 2:16. I’ll see you here then!

Alright I’m on my work laptop at my office desk, so forewarning that I’m only watching the main stream and there’s a (very small) chance I’ll have to pay attention to something else temporarily (why doesn’t my job know there’s daytime gymnastics today?!).

Kendall Knaps and Rose Deshler of Centenary are singing the anthem, and rocking it.

I guess now is the time for the usual “this is a podium meet” discourse. It is! That’s a fairly rare opportunity for these teams, who don’t have a conference meet on podium.

Harris (CC): Bhs loso, some knees and a small check. The arena music is LOUD ah. Switch half to beat, missed her front leg in the half. She’s very steady and calm. Split to straddle 1/4, again just a touch shy. She’s just missing that last bit of extension. Front toss to beat, a tiny adjustment but good. Tuck front 1/1, good landing.

Spivey (SPU): Bit of a long wait for her. Following a Ylay from Fields. Ylay, big step back.

Knapps (CC): Bhs loso, bit off and she falls. Switch to tuck 3/4, clean. Cartwheel, for that sideways skill probably. Straddle 3/4, big fight to stay on, she holds! Gainer lay! Love that.

Bates (SEMO): Low chest on her double tuck, little hop. She had great height on her Tkatchev.

Chan (SPU): FTY with what Kelley is calling a slip and rough landing, trainer looking at her.

Burns (SPU): AH we cut away boo. Kelley says it was huge.

Austin (CC): Bhs bhs loso, big check with some windmilling, but she saves it! Swtich  to back tuck, good. Check on full turn, just a shoulder drop. Cat to switch side, good. Front 1/1, small hop.

Kaziska (SEMO): Kelley saying she fell on her Tkatchev. Fall on her dismount as well.

Sanders (CC): Bhs loso, some feet and soft knees but no movement. Switch to tuck 1/1 o beat directly into her dance. Beat to loso, drops her chest but holds it. Her dance is really intricate and well executed. Steady jump series. Front tuck 1/1, stuck. Good set!

AFTER ONE: THERE’S NO LIVE SCORES

If we hear them I’ll update, but for now :shrug emoji:. Centenary is so pretty on beam! That’s a must-watch rotation if you like beam. Some little nervy errors from everyone, but overall that was a clean first rotation from each team. Kaziska’s fall really opens up the all around, making room for Burns and K. Sanders if they stay clean.

Going to jump in here and say that Karas and Kelley are a pretty great team! They’re obviously both really knowledgeable, and so far they’ve been spot on with IDs, which as we know is historically a problem with Flo streams.

Fischer (SEMO): Bhs loso, good, after a balk, and she’s off.  Hop forward on her dismount.

Harris (CC): Big double tuck! Switch ring 1/2?! to I don’t even know what I was so shook! Small stumble on her combo pass. 3/2 to front lay was a better landing.

Jones (SEMO): Cat to front aerial bhs, very nice. Split 1/1, wow so solid. Maybe a touch shy. Switch to straddle 1/4, excellent. This is a great set. Side aerial to 1/1, not sure if it was meant to be tucked? Small hop.

Oop SPU will go five up.

Solorzano-Caruso (SEMO): Switch half in combination, good. Bhs loso, check and turns to the side. Split 1/1, nice. Side somi + tuck 1/1, low chest but held the landing.

Burns (SPU): K&K love her lines and toes. Agree. Step back on her dismount.

Johnson (CC): Looong wait. HUGE double pike and she puts her hands down, ah. Switch side to shushunova 1/1, good. 3/2, misses her punch into the front lay and barely turns it over, sits it. She’s still really performing out, though, good for her. Double tuck, lets the landing go and sits, possible she wasn’t feeling great and just chose not to risk that last landing.

Slee is scratching on beam for SEMO. I think she was going to exhibition.

Austin (CC): Big double pike, excellent landing! Front lay front 1/1 to Shush, so good. Her lines are great. Hops out of her jumps a touch. Double tuck, slides her front foot a touch but so high. Wow, great routine!

Karas talking about the great difficulty we’re seeing; agree. These teams do not shy away from big skills.

Deshler (CC-exh): hops out of a combo pass a bit. Front lay front 1/1, pulls it down and sits it. K&K reminding us that some of these falls could be podium-related. Short on a ring.

AFTER TWO: NO ONE KNOWS

Floor felt a little rocky for Centenary, but this is a podium meet! Austin is a stellar performer, and the whole rotation is full of great choreography and performance. SEMO had some misses on beam, but some highlights, too. I wish we’d gotten Kaziska’s routine, because it sounded beautiful. SPU is not having a super steady meet, but its also not disastrous, and there’s plenty of time to pull it together in the second half.

Jackson (CC): Ylay, piked a bit and not quite the amplitude.

Sanders (CC): Yhalf, Karas says she was a bit squatty in the landing.

Burns (SPU): Cat to HUGE switch 1/4. Check on her punch front. Kelley says her bhs loso was huge while we were watching floor. Gainer pike so high, good landing.

Kelley says Huff and Johnson both had good FTYs for Centenary.

Tran (SPU): Split to switch half was strong. Front aerial, so steady. Bhs tuck 3/2 steps back.

Slee (SEMO): 5/2 wow so high! Little out of control on the step out. 3/2 to front lay, great landing. Tour jete 1/2 popa, good, maybe just not quite as crisp on the positions as she could be. Double pike, slightly low chest but true stick!

Matsune (SPU): Another fun chest stand mount, love the creativity. ONE ARMED FRONT WALKOVER TO BHS BACK PIKE WHAT. (was it a front aerial, I don’t know, but it was great). I missed her jumps because I was shook. Hitch to side aerial tuck 1/1, small step. So much bonus in there good grief. Wow.

AFTER THREE: YOUR GUESS IS AS GOOD AS MINE

Wow, SEMO and SPU! What great rotations! SEMO is really excellent on floor, and I love the creativity SPU brings to beam. This meet is very fun all around, honestly. Not knowing the scores is sort of just making the whole thing a party.

Wilson (CC): Hearing she had a fall.

Durst (SPU): Some leg sep on combo pass, but good landing. Double tuck, stumbles a bit. Misses splits in her leaps by a touch, not egregious.

Slee (SEMO): FTY, piked some and not quite the amplitude.

Jackson (CC): Ray! Little lacking in amplitude. Bail, some softness in her back. DLO, step back. Short handstands throughout.

My apologies, I missed Ponder on bars, but she was pretty clean, just some leg form breaks and a hop on the dismount.

Solorzano-Caruso (SEMO): FTY, not a ton of distance, a little pike.

Kaziska went 9.65 apparently, could not tell you what is with that. She lacked some height I suppose, but yikes harsh.

Knaps (CC): Giant half to bail hand, held it. Short handstand. Double tuck. That’s not up to the level on the dismount.

Reese (SPU): Double tuck, good landing. Rudi, a little low and off to the side. Good leaps. 3/2 to front lay, looses her knees in the second but gets the landing.

SEMO is having a big cheer moment in a huddle and it’s giving me warm fuzzies.

Burns (SPU): How fitting that she gets the whole arena to herself. I live for these kinds of moments. Front through double pike, great height, deep knees on her landing. She’s such a performer, you can’t take your eyes off her. HUGE switch side popa wolf 1/1. Double tuck, slightly low chest but she pulls it up.

Man, that was fun, wasn’t it?! Really exciting gymnastics, really difficult gymnastics, and some strong performances. I’m coming away with a few new favorite routines for sure. If you get a chance, definitely try to catch these teams in action this year. What a fun group.

I’m hanging around on the stream for awards so we can get some scores!

Like what you see? Consider supporting our efforts throughout the year!