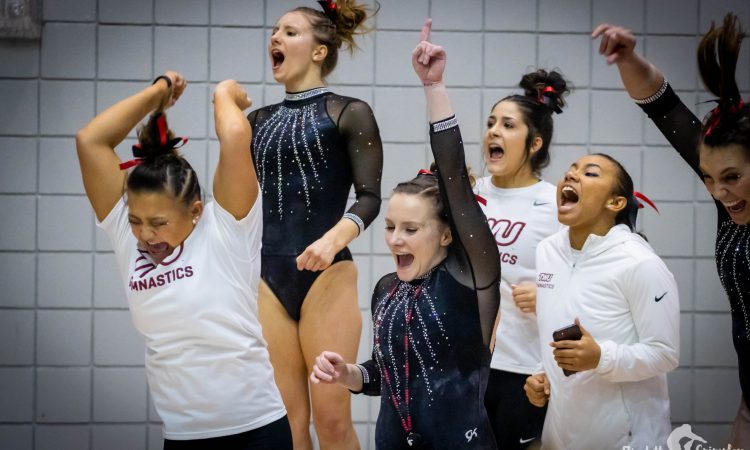 The story of the weekend in USAG gymnastics was undoubtedly Texas Woman’s: The Pioneers became the first USAG team to score over 195 this season, and then repeated the feat only two days later. It was both a massive game-changer for the field as a whole and a huge relief for TWU, which had serious potential last year but could never put the pieces together. Meanwhile, Bridgeport and Lindenwood continued to be so-close-yet-so-far, Yale has become the consistent one and on the individual side—the 9.9s are starting to flow.

Obviously Routine of the Week

I try not to repeat too much for these awards, but how can I pick against Maya Reimers’ career high 9.950 on her senior night? It’s without a doubt the best routine being done in USAG gymnastics.

Lazaro, already the Bears’ floor anchor only a month into her freshman season, took my breath away when she stuck her front full-front full final pass on floor absolutely dead—on two consecutive days.

Breakout Performance of the Week

After some inconsistency in her freshman season, Goyco has hit her stride this year and become a high-value contributor on bars and floor for the Pioneers. But this sparkling 9.900 floor routine versus Oklahoma is a step up from anything we’ve seen her produce before, and if it’s something she can reproduce, she could accomplish a great deal.

*Penn chose not to contend for the USAG national championship this year.

The Big Storyline: SEMO had a great day, registering its first win over Lindenwood since 2014 and its highest score since 2016. A jaw-dropping bars score of 48.725 set the tone—remember, this team didn’t crack the 47.000 mark once in 2019. For Lindenwood, vault could have been better but the real challenge came on floor, where an injury to three-eventer Taylor Colwell forced the Lions to count a fall. A great 49.050 beam rotation limited the damage, but it still wasn’t the total Lindenwood has been looking for. Coaches Jen and Cody Llewellyn were at this meet after the birth of their son a few weeks ago, and Courtney Mitchell excitingly made her return to the vault lineup after an ankle injury late last year. Freshman Sydney Lopez made her all around debut after competing just vault and bars previously, falling on beam but putting up a strong 9.750 on floor.

Implications: Lindenwood held onto the No. 1 ranking by a thread, as Bridgeport once again squandered a chance to take over. SEMO remains firmly in contention to qualify to nationals as a team.

Records: In a post-meet ceremony, head coach Ashley Lawson was inducted into the Southeast Missouri Hall of Fame for her own extensive accomplishments as a Redhawks gymnast.

Controversies: The commentator for this meet was seriously struggling, unable to pronounce the names of home gymnasts or conference teams like Centenary. With smaller teams you expect average commentators, but this was just sad.

The Big Storyline: As with so many Bridgeport meets this year, this was a great performance with one missed event. While a counted fall and a few extra wobbles on beam isn’t a full-scale disaster, it nonetheless is a disappointment for a team that could break into the 195s so easily if all four events lined up on the same day. That said, it was a great day for Maya Reimers, who scored an astounding personal best of 9.950 on floor, as well as walking away with the beam title. The Purple Knights debuted freshman Grace Hunter on floor as a replacement for Katy Koopman, who was injured last week; Hunter is a great performer, but fell on both of her debut routines.

The Big Storyline: This late Sunday meet was fine but not great for all three teams. Bridgeport, perhaps finally showing signs of fatigue after competing five times in two weeks, had a dramatic meltdown on bars—Kat Doran’s title-winning routine was the only strong hit from the whole team. It bounced back with a season high 48.800 on bars, but that only did so much to limit the damage. Brown had a bars disaster of its own, coupled with an outstanding beam rotation to produce a so-so total. While SCSU’s likewise shaky bars rotation (it was a whole thing) wasn’t the worst it’s produced this season, the final score was still a bit of a let-down after last week’s program record.

Implications: Most of Bridgeport’s rankings remain the same after this week. It missed an opportunity to step into the No. 1 USAG ranking, but it does remain the No. 1 ECAC team across divisions.

Controversies: It’s time to confess: Who went to Providence and cursed the bars? Only five gymnasts at this whole meet scored above 9.500. Two of these teams were on the second leg of a two-meet weekend so fatigue is understandable, but still, that doesn’t just happen.

The Big Storyline: A rock-solid bars rotation made the difference for Yale, allowing the Bulldogs to set a season high on senior day despite lower beam and floor totals. Jade Buford walked away with two titles at her last home meet. Scoring over 194 two weeks in a row is a great accomplishment for Yale with some injuries, though compared to other top teams it lacks some consistently high-scoring standout routines.

Implications: Yale remains at the top of the Ivy League and second in ECAC-I, just behind Temple. It drops a spot in USAG standings and nationally, overtaken by the Texas Woman’s surge.

The Big Storyline: This season has been a story of two leg events for West Chester, as vault continues to slide further down while floor excels. This meet’s season-low of 46.875 on vault likely included a counted fall, but it’s part of a worrying trend rather than a simple fluke. Meanwhile, floor soared, totaling 49.050. The Rams’ bars rotation is on an upward trajectory and beam, while unreliable, has a lot of potential. So if West Chester sorts out the vault situation, its path back to 194 is clear.

Implications: West Chester continues to slip as other teams in USAG begin to push toward 194 and beyond, but this is a step in the right direction for the Golden Rams, who will be No. 58 nationally this week.

The Big Storyline: The absence of beam specialist Natalie Yang didn’t seem to trouble the Quakers, who went six for six on beam and 23 for 24 on the meet as a whole to set a season high. Penn looks like a different team this year in terms of consistency, and can score even higher with cleaner landings and handstands. Freshman McCaleigh Marr continues to be a revelation—she led the Quakers on bars and provided the second-best score on beam in only her second college meet.

Implications: Penn reminded us in this meet that the ECAC-I conference championship is going to be one heck of a fight.

The Big Storyline: This was a close and exciting meet that featured plenty of outstanding individual performances. Darian Burns from Seattle Pacific had a career day, putting up the best all around score of any USAG gymnast this year and taking home titles on vault and floor as well. She is the primary weapon of a Seattle Pacific squad that is having a landmark year—after failing to score above 193 at any point in 2019, the Falcons have now done it twice in a row. Air Force had great performances from Anna Salamone and Briona Carswell, both of whom won individual titles, but they couldn’t stop the Falcons from counting multiple misses on bars and beam and fielding only five routines on floor after star Tyler Davis was injured in warm ups.

Implications: SPU held its ranking this week but improved its average considerably, now biting at West Chester’s heels in the No. 6 spot. Air Force also held onto No. 5, with West Chester and Texas Woman’s trading places around it. Anna Salamone passed an absent Mei Li Costa to become the No. 1 USAG bars gymnast.

The Big Storyline: This was a jaw-dropping result from a TWU squad that hadn’t yet scored 194, much less 195, this year. In fact, it’s the first and only USAG team to do so. Newcomers like Daisy Woodring and previously-injured Domi Bonzagni are hitting their stride as Pioneers, but the key difference between this meet and previous ones is less consistent mid-lineup routines simply ceasing to make mistakes. The return of some previously absent veterans, like Bridgette Peterson, was welcome, too. This score exceeded TWU’s 2019 season high. Taylor Ann Wilson made her season debut for Centenary, which excelled to produce an equally impressive season high score. Centenary has improved drastically since the beginning of the season and improved on its previous season best by around two points.

Implications: Both teams competed later in the weekend.

The Big Storyline: TWU excelled again at home, coming up just a tenth short of Friday’s season high. The Pioneers also debuted a lovely new black leotard (that you can spot in the header photo!) Hosting home meets against Division I opponents with free streams is always an exciting opportunity for the Pioneers to be watched by viewers who don’t follow Division II gymnastics closely, and they made plenty of new fans.

Implications: Texas Woman’s rocketed up the rankings to No. 52 nationally and No. 3 in USAG on the strength of its amazing weekend.

Controversies: Some fans had issues with the quality of the audio and video coverage at this meet.

The Big Storyline: Brown survived this first outing in its dual-meet weekend, but it’s time for the Bears to stop counting mistakes if they want to make it back to USAG nationals as a team. Freshman duo Lauren Lazaro and Jasmine Lee continue to be remarkably consistent. Brown was notably missing Mei Li Costa at this meet, which limits the potential of its vault and bars lineups in particular.

The Big Storyline: Cornell survived a meet without having a meltdown on bars, but it’s still a long way from the results it should be capable of. It was good to see Izzy Herczeg rejoin the vault and floor lineups—she began the season competing only on beam, likely needing a slow start to the year after spending the fall semester studying abroad. On both vault and bars, only two Cornell gymnasts have exceeded 9.700 all year. That’s the crux of the problem, and hit routines simply not being good enough is more difficult to solve than mere consistency issues.

Implications: Cornell continues to be ranked last in Division I and also behind all Division II teams.

The Big Storyline: This was Centenary’s second 191 of the weekend—a landmark result for a Division III team. Cami Bea Austin continues to excel for the Ladies, though she has not competed on bars since the first few weeks.

Implications: After a great weekend, Centenary rockets up to the No. 1 ranking in Division III—though it doesn’t compete with other Division III teams for postseason, so it’s a symbolic accomplishment.