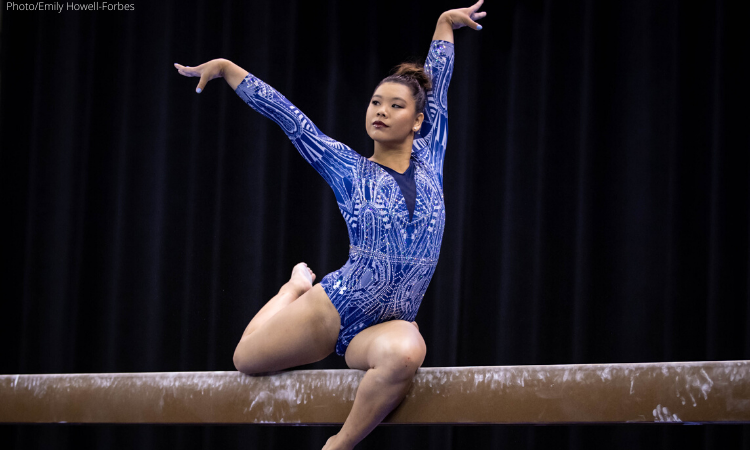 It’s time for the Bruins’ Pride Meet, and we have been promised a (what I assume will be) new multi-colored leo and rainbow ribbons in honor of the event. UCLA has been killing it with the new leos so far this season (the retro inspired one from last week might be one of my favorite leos ever), so I am excited to see what is in store for this meet.

The Bruins are coming off of a surprising loss against Washington last week after nothing short of a “beamtastrophe” derailed their efforts toward an otherwise good score. Beam has been quite the issue for the Bruins all season; they are still trying to settle into a consistent lineup and seem to be plagued by falls. The meet had some significant bright spots, however: a perfect 10 for Gracie Kramer on floor and a pair of career-best 9.950s for Norah Flatley on beam and floor. At this point, we are just waiting for the chalk to settle to get a better idea of what this team really looks like when firing on all cylinders.

Arizona has been killing it this season — it is currently ranked 20th overall after finishing 35th in 2019. Christina Berg has been phenomenal on bars, as expected, and Maddi Leydin has really stepped up this year, as well. The Wildcats also have a stellar freshman class, with especially notable routines on bars and beam from Zaza Brovedani. We are still waiting to see if Courtney Cowles will be making an appearance tonight; she has been missing from lineups and presumed injured since the middle of January (although she did do an exhibition on beam last week).

You can follow along here and live stats will be posted here.

UCLA has added rainbow colored 10.0 signs to the seats.

Having some minor stream issues but hoping to get things up and running shortly here.

Alright all things are up and running!

Okay, I love the gay pride flag that AZ has.

Leydin (AZ):  Pak salto had some leg separation, markelov was good – a little slow swinging into it. Shy on the final handstand. Giant full into a double back, hop on the landing. 9.750

Andres (UCLA): FTY, piked down a bit and had some flexed feet; hop on the landing 9.750

Hendricks (AZ): Blind change to jaeger to overshoot, some leg separation on that, good final handstand. FTDL dismount, step back. 9.825

Shoutout to this FABULOUS soundtrack in the background. Lady Gaga, Whitney Houston…

Well, that was a decent rotation for the Bruins, but vault is no where near where it was last year. They are still trying to figure out the front end of that lineup, and the Ross and Hano are both a little more hoppy on their landings than they have been in years past. All things that can be worked on, and I assume will improve as the season progresses, but its still a noticeable area where UCLA is giving up tenths.

Arizona has some very pretty bar routines in the back half of that lineup; its too bad Kane hit her feet on the mat, because that was shaping up to be a beautiful routine otherwise.

Nosek (AZ): FTY, pretty good position, pikes down a bit and a hop on the landing. 9.675. That seems a bit low by comparison to UCLA.

Hano (UCLA): Toe on tkatchev to overshoot, looked better than normal. Great final handstand. Giant full to double back dismount and sticks the landing with a lean. That was one of the best Hano routines I’ve seen this season. 9.825

Kooyman (UCLA): maloney to pak, some leg separation on both. Good final handstand. DLO dismount with a hop. 9.800

Steele (UCLA): Nice handstand. Maloney to pak, pak was really high although there was a little leg separation. DLO dismount, sticks it. 9.850

Davis (AZ): (she has fabulous eye shadow btw) FTY, good body position in the air, lacked some amplitude. Hop back on the landing. 9.800

That was a good bar rotation for UCLA. Ross was very close to a 10, but didn’t quite get it. Arizona also had a steady vault rotation; not their best but no major issues.

Sounds like Norah sat out on bars due to a migraine, so no injury concerns there.

Orman (AZ): Front layout to rudi to start, lacked a little control on the landing. RO BHS double pike for her second pass, ALMOST went OOB – maybe she did, hard to tell from that angle. Pretty leap series. Some landing issues but nice lead off. 9.700

Sakti (UCLA): Standing LOSO LOSO combination which I love, solid. Switch half, balance check, beat jump. Another balance check on her full turn. Looks just a tiny bit off on her leap series too. Nerves after being out of the lineup for a while? Side aerial to back full, step on the dismount. 9.750

I love how Sam said, “It wasn’t a fall, and that’s what UCLA is working on” — words that don’t sound like they belong in the same sentence with all of the potential in that beam lineup.

Flatley (UCLA): Front aerial to back pike combo, slight balance check but covers well. This acro series works much better for her. Side aerial was nice. Loses balance on her L turn but saves it. Leap series looked good. BHS 1.5 dismount with a hop. Not her best, but you can tell from her lack of (normal bounding) energy that she isn’t feeling well. 9.750

Hargrove (AZ): Huge double pike to start. Second pass looked good as well. Switch ring switch half looked fine, didn’t quite get her head back enough on the ring. Pretty double back to finish. 9.725

Cowles (AZ): Opens with a clean double back. Her entire right leg is pretty much wrapped with tape and bandages. Front lay out front full, looked controlled. Very pretty switch ring and leap series. Finished with a rudi, landed a little short but covered well. 9.775

Leydin (AZ): Front tuck through to a double back first pass, solid. Really solid and controlled leap series. Finished with a double pike with a big step back, mostly controlled. All around a really pretty routine. 9.825

UCLA survived a beam rotation without a single fall! I think I speak for everyone when I say it’s about time. Career best 9.900 for a pretty routine from Poston, and Kyla almost goes 10 again but once again is stuck with a measly 9.975.

Arizona looked good on floor, little errors and bouncy landings added up to a lot of routines in the 9.7 range, but there is a solid foundation to build on there.

Hargrove (AZ): BHS LOSO, a little crooked but covers a balance check very well. Side aerial was solid. Split leap, sheep jump that did not look like she got her head back very far (hard to tell from that angle.) Hop on the dismount. 9.725

Andres (UCLA): 2.5 punch front to open, stuck. Wow. Great straddle leap series. Round off double back, barely ran into that. She has a lot of power. Front handspring rudi to finish, very nice. Wow. 9.875

There is like no separation in these beam scores… which, fine but. There should be.

Kramer (UCLA): Front double full punch pike, good. RO 1.5 lay out, controlled. switch side Popa looked good. Rudi to arch jump into her final bit of choreo, her normal. This looked just as good as last week, so we will see if the judges go 10 again. Nope – 9.950.

Cowles (AZ): Cat leap to a front aerial to a split jump, moved consistently through it albeit a little slow. BHS LOSO, slightly crooked but saves it. Pretty leap series. Front gainer full, step to the side. 9.750

Davis (AZ): BHS BHS LOSO, very nice. I love a good triple series. Leap series looked good. Front toss to beat jump, controlled. She has a lot of poise, especially for a freshman. RO 1.5 dismount with a tiny hop. Best routine by far, and the score should reflect that. 9.800.

Ross (UCLA): Whip double back nailed, she gets so high on her double back. One and a half front lay, good. Double pike, lands a little short. I love how much she has improved on this event since coming to college.

Well, that was a good meet for UCLA. The Bruins didn’t have any egregious errors, no falls, no major balance checks. This was made even more impressive by the fact that they were missing some key players today: Norah Flatley on bars and floor, Pauline Tratz (who apparently has the flu – does everyone have the flu this year or is it just me), Margzetta Frazier is still largely absent from lineups as well. Hopefully this is a sign for good things to come for UCLA.

The scoring on beam for Arizona felt a little off to me —not a lot of separation in those first few routines—but I’d rather have tight scoring than over scoring.