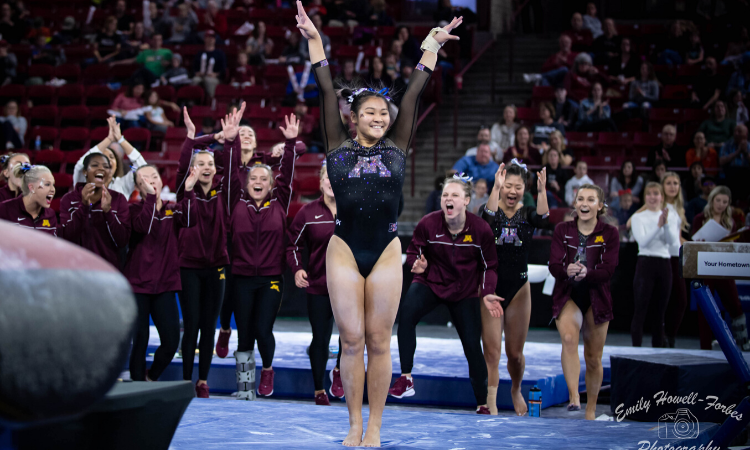 Minnesota earned its fourth conference victory at its meet against Iowa on Saturday night, recording a 196.825 at home in Maturi Pavilion. The No. 6 Gophers aren’t resting on their laurels, though: They have big goals and aren’t hesitant to put in the work needed to get there.

Part of that work started long before the 2020 season kicked off. “They go home for about a month after summer school with us, and [we] really stressed to them how important it was to keep doing what they were doing and not take too much time off. I think they took that to heart,” head coach Jenny Hansen said. “They worked out and at a minimum maintained what they were doing if not did more, so they came in ready.”

This level of readiness meant the Gophers were prepared much sooner than in previous years. “They were ready to do full routines within a few weeks of getting [on campus],” Hansen said. “We really haven’t had too many teams be ready for that. It’s really been a big key for our team.”

The Gophers elevation into the postseason conversation has officially transitioned from theoretical into a real possibility. They are currently the highest ranked team on beam, first in the Big Ten and sixth overall in the country. They have yet to post a score that falls below 196.300—but they also have yet to put together a meet where they hit to their fullest capability on every event. The possibility to do better and to score higher is the constant undercurrent to an already successful season.

While the middle of the season can be challenging—the early excitement has worn off, and the postseason is still a ways away—Minnesota is using the opportunity to double down and work even harder. Practice has shifted toward perfecting and fine-tuning, focusing on the “little details.”

“Making sure we’re squeezing our legs in our handstands, and all of our skills just making sure that everything looks refined, and getting dismounts,” said sophomore Tiarre Sales, who made her all around debut against the Hawkeyes. “Every tenth counts.”

All of those tenths really matter when talking about the postseason and competing against teams like No. 1 Oklahoma, who the Gophers will face in a dual meet next month. “We’ve been doing a lot of things right so far,” Hansen said.  “It’s just focusing even more on the little details and putting them under different pressure situations.”

One detail is anything but small. The Gophers have a new-found confidence this season. When asked about the team’s goals, Sales responded without even the slightest bit of hesitation: “Nationals.”