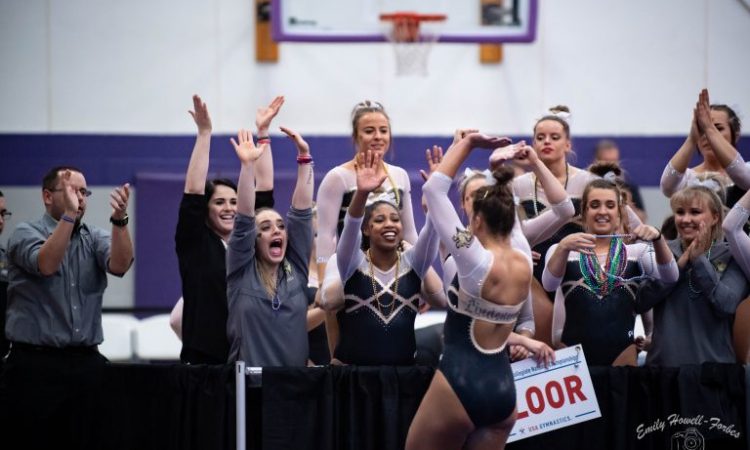 Happy Friday and welcome to another edition of Rebecca Live Blogs What Rebecca Wants! I’m going to have a great time, and I don’t care if anyone else does. Self-care.

I love USAG gymnastics, but it often isn’t live streamed in a useful or clear way, so I’m always excited to get a really good look at these teams. Lindenwood is off to a much slower start than it would like, failing to break through the 194 mark so far this year. In Division II gymnastics in particular it’s common for teams to improve drastically over the course of the season, so on any given week the Lions could catch fire and completely dismiss the concerns I’ve had. But at this point, radical inconsistency on bars has been holding down a team that should be capable of a 196 or more.

SEMO doesn’t have the ceiling Lindenwood does, but it certainly has more momentum. Last week’s 192.775 was a landmark for the Redhawks, and cracking 49 on floor is deeply impressive.

I’m expecting a tussle for the all around title here between No. 1 Anna Kaziska, No. 3 Dahlia Solorzano-Caruso and No. 9 Ryan Henry. Kaziska could also have a fight on her hands for the floor title, as Lindenwood freshman Gayla Griswold is only beginning to show what she can do.

Pre-meet notes: Ashley Albrecht is not dressed, the commentators are aggressively helpless and can’t pronounce everything, and Jen and Cody Llewellyn are here! I believe it’s their first meet since the arrival of their baby boy a few weeks ago.

Boogerd (LU): Blind to Deltchev to overshoot, good, double layout with a hop Great start on the make-or-break event! 9.700

Adams (SEMO): Twisting on hard and pikey on her FTY, hop to the side.

Colwell (LU): Tkachev, lower with a bit of feet, blind to straddle back really nice. Tentative handstands, double lay with a little hop. 9.675

Bailey (LU): Blind to Jaeger to overshoot, pretty. Keeps her legs together under the bar and it really makes a difference. Blind full double back, little hop. Nice! 9.85

Maxwell (SEMO): Yurchenko tuck full, close to the table and off to one side with a step forward off the mat. 9.65

Henry (LU): Jaeger, release timing a little off, gets it around but it’s low. Bail is a bit off, FTDB dismount with a hop to the side.

Slee (SEMO): Another tuck full, better dynamics than Maxwell and a hop back. 9.65

Mitchell (LU): Good Jaeger, OH MY WHAT. Came in over the top on her bail by probably about fifteen degrees, there should be no way to save that but she did it and not even any drama. Double layout pretty with a hop . 9.75

Solorzano-Caruso (SEMO): FTY off to one side with a sideways hop. 9.575 is harsh.

Lopez is still inexperienced and a bit nervy, and she’s not the cleanest routine in the lineup so it’s not a big deal that she slipped up. It’s a huge deal that Lindenwood got through a bars rotation 6ish/6! Every reason to expect a season high with the monkey off its back.

Miller (SEMO): Pike Tkachev to Ezhova, half turn a little lacking control on the low bar, double layout looked good, stagged back and fell. YOU WERE SO CLOSE KID 🙁 9.15

Griswold (LU): Best vault I’ve seen today, lots of amplitude on FTY with a little hop back. 9.825, thank you.

Bates (SEMO): Pike Jaeger to overshoot, leg flickers but good dynamics, blind full with a leg split to double back. 9.825

Leman (LU): FTY, just off from the beginning. Staggered forward and I couldn’t tell if she dropped her knee but it was a close thing. 9.4

Fischer (SEMO): Missed the first hadnstand, Tkachev not clear of the bar by a lot but clean. Leg form on the bail, she casts with her legs a little apart which makes everything look a touch odd, double lay with a step. 9.650

Kaziska (SEMO): Tkachev lovely, clear hip to bail a little off but fine, missed a handstand, blind full double back with a step. Pretty! 9.725

Solorzano-Caruso (SEMO): Ray amazing, missed a handstand, splits her legs to toe shoot very quickly out of the bail. Blind full double back with legs a bit wonky but a stick.  9.800

So somehow I completely blanked out Ryan Henry sometime in this rotation. Sorry Ryan Henry </3 but she fell anyway.

48.725 for a SEMO bars rotation is RIDICULOUS. Are they freaking out, because they deserve to be freaking out?

So much for the all around race with the Henry fall. Tough breaks for Lindenwood, but closing on beam is friendly territory.

Leman (LU): Bombed her front double full, one and a half front pike okay, a little skid. Got the last pass.

Well, a fall each, the way we want to start…?

Moffitt (SEMO): BHS LOSO, tentative but clean, switch straddle half with a low chest. Full turn, cat leap switch side a little short, one and a half with a weird stagger forward.

Maxwell (SEMO): BHS LOSO, lean and holds on, full turn, lean again. Beat straddle 3/4 is good, cat leap switch side. One and a half and a hop forward.

Jones (SEMO): Cat leap front aerial BHS, little bit of knees on the aerial. Split full with a little check but amazing split on that very difficult leap. Switch split quarter, side aerial tuck back full with a step.

Baze (LU): Double pike, double back a little overrotated but keeps it under control with a big lunge. Switch side split full wolf full with rotation issues, one and a half front lay well done. 9.625

You know, they told us that was Henry, but it didn’t look like her to me. Okay, this was Sydney Lopez. Would guess a lineup change.

Kaziska (SEMO): Front aerial to split, full turn, switch split quarter beautiful. One and a half stuck or close to it. 9.875!!

Roberts (LU): We really didn’t see any part of this. Frustrating camera work, cutting back and forth quickly between events. 9.45

Everything going wrong for Lindenwood here. Sucks to miss another chance at a good road score, sucks more to lose Colwell.

Desch (SEMO): Double pike, one and a half front pike pretty. Double back strong, chest down. 9.65

Moffitt (SEMO): Double back, front full front lay looks good. Alana Fischer is in the corner wearing overalls for some reason. Double pike with a scoot. 9.825!

Lopez (LU): BHS LOSO, fall. Switch switch with a one foot takeoff in the middle, off and hops around a bit but stays on. 9.2

Mitchell (LU): BHS LOSO, hesitation but gets it, split split 3/4. Full turn, check on something we didn’t really see, switch side.

Slee (SEMO): Two and a half twist, steps around another half turn. Gainer full with a step. Double pike underrotated, step forward. 9.65

Henry (LU): Back after sitting out floor. BHS LOSO lovely, wolf hop switch side. Side aerial off line, dramatic present fixes it, beat straddle half, good dismount. AMAZING. 9.85 is mean.

Kaziska (SEMO): Front double full, step back. One and a half front lay is beautiful, Rudi nailed. In a different class.

Not a disaster score for Lindenwood compared to this season—might even be a season high. But a lot went wrong today and it’s hard not to focus on what could have been.

Meanwhile, WOW SEMO. Been a long, long time since the Redhawks put up a total like this. Absolutely magnificent day and so much to be proud of for the young SEMO squad.