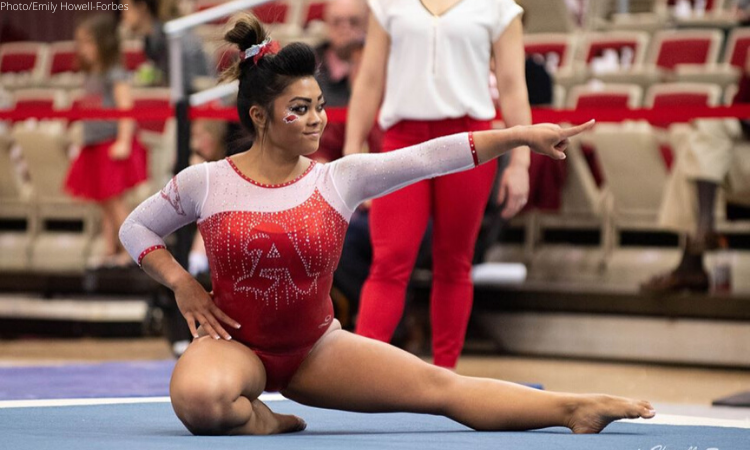 Is anybody else in disbelief that we’re already in week six? Why does the offseason last so long only for season to go by so quickly? Regardless, we have quite the matchup tonight.

These two head coaches are probably the most decorated in the NCAA with three Olympic medals, five world championship medals and 14 NCAA titles (as either a coach or a competitor) between them. But I’m sure they would both agree that we should focus on the athletes instead.

The best event for both of these teams is floor, so expect the second half of this meet to be spectacular. The first half, however, could be what determines the outcome. Georgia is the better team on paper, but both of their road scores this season have been lower than either of Arkansas’ home scores. If the Gymdogs can get through vault and bars without counting any low scores, they should be the favorite to come away with the win.

Freshmen have been major contributors for both teams, with Kiara Gianfagna competing weekly all around for the Razorbacks, not to mention redshirt freshman Bailey Lovett on three events, and all four Georgia freshmen are contributing key scores every week.

Both teams have had multiple injury setbacks early in the season but are starting to settle into consistent lineups. Upperclassmen Sabrina Vega (who was a teammate of Wieber at 2011 Worlds) and Rachael Lukacs have shined in star senior Rachel Dickson’s absence, while Arkansas’ core group of Jessica Yamzon, Sarah Shaffer and Kennedy Hambrick remains strong.

This meet will be streamed on SECN+ and a live scores link can be found here.

Arkansas has released its lineups and apparently Amanda Elswick is competing vault! It’ll be her season debut after injury kept her out of lineups. Exciting!

Yamzon VT: Y-full, a lot leg separation on the block and then a large step back on the landing. 9.65

Lukacs UB: Low amplitude on the Tkatchev then short on the next handstand. Leg separation on her Pak then short on handstand after her half pirouette. Another short handstand on the high bar but nice DLO, stuck. 9.725

Gianfagna VT: Another Y-full, better than Yamzon’s. Clean in the air, large hop back. 9.675

Hambrick VT: Another Y-full, good distance but takes a hop back on the landing. 9.8

Shaffer VT: Y-half, a little short and a decent-sized step back. 9.75

De Jong UB: A little piked on her handstands. HUGE Tkatchev but REALLY short on her next handstand. DLO with some leg separation and a hop forward. 9.75

Elswick VT: Great Y-full, a slight hop back but really nice in the air. 9.875

Oakley UB: Beautiful Jaeger, great handstands and Pak. Last handstand is perfect. Slight hop back after her FTDT but hard to find any other faults with that routine. 9.875

Not a huge start for either team, and scoring seems tight, but Georgia especially will take that relatively clean bars rotation and the lead. No major errors from either team so far but there are plenty of things to clean up.

Ward VT: Tsuk full, a little overrotated on the landing with a hop back. 9.75

Gianfagna UB: Great Ray. Bail a bit uncontrolled. Maybe a little short on a couple of her handstands. Great FTDT with a stick. 9.875

Garner UB: Full turn to Gienger to bail. A little short on her last handstand. Full turn to double tuck, step back on the landing. 9.875

Lovett UB: Nice Ray, a little close to the bar. Good bail to handstand. Her handstands are good. Full turn to double back, stuck. Nice routine. 9.875

Hawthorne VT: Y-full, low in the air and then falls forward onto her hands. 9.125

Lukacs VT: Yurchenko double with a step back, pretty clean in the air. 9.85

Laird UB: Ray with low amplitude. A little arched on her next handstand, but nice bail. Clean DLO with a small step forward. 9.85

Arkansas killed that bars rotation with a 49.425. I’m not sure the gap should be 0.275…these teams feel about equal so far for me. Let’s see how the rest of the meet unfold.

We’re getting some Miss Val/Jordyn Wieber fluff right now. It’s worth a watch if you care about such things.

Yamzon BB: Cat jump to straddle half, nice. BHS LOSO LOSO, solid with perhaps a slight check at the end. Front toss with a low landing but preserves the connection to the beat jump. Good gainer full dismount, stuck. 9.825

Perez-Lugones FX: Good double pike to open. “She’s having so much fun, look at her smile there.” Layout half to front layout, clean. Good leaps. Double tuck to close, good landing. No obvious errors. 9.75

Gianfagna BB: BHS LOSO is right on. She has a good rhythm, no major pauses. Front toss, good. Switch leap to back tuck with major check, leg up high. Good leap series to follow. RO 1.5 with a hop forward. 9.775

Roberts FX: Piked full-in is gorgeous. Front layout to front full, pretty clean. Double pike to close, a little low on the landing but she manages not to take a big step. 9.8

Lukacs FX: DLO with some leg separation, clean landing. RO 1.5 to front layout half to Shushunova. Double pike to close, another good landing. 9.875

Hambrick BB: BHS LOSO with some soft knees. Back leg a little low on her leaps. Beat jump to straddle 3/4, well controlled. Gainer full dismount, stuck. She’s awarded with the stick hog nose (is there a technical term for that?). 9.925

Shaffer BB: Good to see her back on beam. Front aerial with a check but she quickly recovers. BHS LOSO with another check. Leap series is a little low. Side aerial to back full dismount, it looked like she missed her back leg a little bit after the aerial so she ended up a little short and had to take a hop forward on the landing. 9.725

Vega FX: FTDT is beautiful, her lunge isn’t exactly controlled but she manages to make it look nice. Back 1.5 to front layout to jump, nice. Her ring position isn’t perfect but this is college. Double pike with a bit of a slide back. 9.95

Georgia closed the gap slightly after that 49.350 floor rotation, but they’ll go to beam–a relative strength of theirs–while Arkansas goes to floor, their best event. This one will come down to the wire!

Gianfagna FX: Double pike to open, gorgeous. Back 1.5 to front layout, nice. Double tuck to close, not sure if that’ll count as a controlled lunge but still a good landing. 9.8

De Jong BB: Check after her full turn. Beautiful leaps. Front layout to beat jump, lovely. BHS LOSO, solid. Almost loses her footing after another jump but saves it. Side aerial to back full dismount, stuck. Why is “free falling” being played in the background? 9.925

They’re showing a panorama of the crowd and saying it’s nice to see as many men as women, but I only count four men as opposed to about 20 women?

Baumann BB: Side aerial to LOSO, major check at the end but stays on. Beat jump to switch side, very nice. RO 1.5 dismount, a little short with a step back. 9.775

Lovett FX: Very nice DLO. Nice combo pass. Huge double tuck to close, a bit of a deep squat on the landing and then a step forward to keep from falling. 9.925

Carter FX: Very nice double tuck to open. Back 1.5 to front full, a little but uncontrolled on the lunge forward. A little low on her leaps. Double pike to close but she’s leaning back a bit on the lunge…we’ll see if the judges notice. 9.875 so they probably did notice.

There was definitely some cracky scoring happening in this meet, but the outcome seems about right. Georgia didn’t live up to their full potential while Arkansas did about the best they could. I don’t think it was the meet that either team was looking for, but it wasn’t a disaster either. Georgia now has three road meets left to get some 197+ scores or else they won’t be in a favorable position going into the postseason.