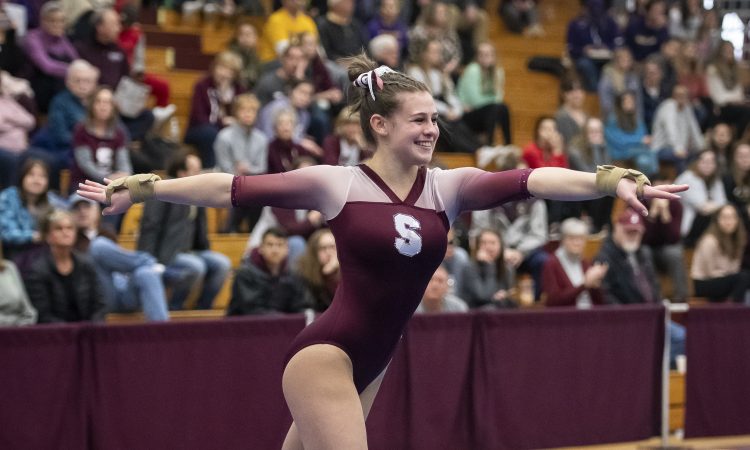 We’re in the Philly suburbs for a DII/DIII showdown! West Chester has been soaring to start the season, culminating in a score last week that fell just below last season’s final NQS. It’s shaping up to be a tight battle between this squad and Lindenwood for the top spot in DII. The Golden Rams boast a plethora of exciting routines to watch, especially from junior Jessica Meakim, the reigning ECAC-II gymnast of the week. She’ll be looking to extend her all around win streak for the fourth consecutive week.

West Chester should have a comfortable edge today, but the competition between the DIII teams could be tight. RIC has typically struggled to start the season, but it broke 180.000 last season on the heels of a strong all around performance from freshman Kelsey Gates. She has big beam and floor routines that could compete with Meakim and her teammate, Yolanda Nodarse, for standout moments of the day. Springfield has also had a slower start than usual, but last week tit was briefly ahead of Cornell and Southern Connecticut after impressive performances on beam and floor. Clearly, these are the two events to watch for all three teams today. We’re also watching to see if Pride powerhouse Tali Twomey returns to vault and floor lineups; she has yet to appear there this season.

Didn’t mention this above, but it’s my first time covering DIII! Super excited to watch these teams after all the Twitter hype.

WCU has dedicated its season to mental health awareness. <3

Silva (RIC): Side aerial, small check. Switch leap to switch leap, second leap she falls and splits the beam. Ouchy. Comes back for a gainer tuck dismount with a step. 8.700.

Jewett (Springfield): First giant is off and she comes off. Goes for it again and…off again. Sets up for double back dismount, very deep but controlled and not much movement. 7.200

Murphy (Springfield): Seems hesitant on a handstand but saves it, good into the bail. Double front chest down and a hop forward. Must’ve missed a fall…8.825.

Benz (RIC): BHS, breaks connection into side aerial, then goes for side aerial and falls. Switch leap to stag, doesn’t get the position but less hesitant. 8.225.

Sipes (Springfield): Some crazy legs on the bail but makes it. Short last handstand into DLO with a small step. Great dismount! 9.600.

Calabrese (Springfield): Missed the start but she has great extension. Stuck double back. 9.100.

WCU doesn’t have the biggest vaults, but the confidence is clearly there. Springfield and RIC will look for more hits later after starting out on traditionally nervy events. RIC earned its second highest beam score of the season.

Campagnone (Springfield): Punch front mount, well okay then! BHS to back tuck. Back 1.5 dismount, a difficult one! 9.650

Kelly (WCU): Legs look off on Tkatchev and she comes off on it. Double back small step. 8.800

Nodarse (WCU): Arches over on first handstand but saves it going into Tkatchev. DLO super close to the bar, step back. 9.650

Lynn (RIC): Front lay to front half, has to put hands down. Rudi chest way down.

Springfield’s team cheer for floor is “Sassy but classy.”

Gendreau (Springfield): Front full to front lay, PONYTAIL-OGRAPHY. Back full to back tuck. 9.300.

Miranda (WCU): Another triples series, hesitates but she saves it. Back double full, stuck. 9.600

Meakim (WCU): Off on BHS LOSO. Back 1.5 dismount, small step. The RIC banner fell down while she was performing, the POWER she has. 9.175.

Rosier (Springfield): Good first pass, looked like she went for a front rudi for the last one but underrotated and landed on her knees. 8.800

Parquet (Springfield): Back 1.5 to front lay, haven’t seen much of that pass today…for once. Her floor music is that Migos song from the new Hotel Transylvania movie, obsessed. 9.300

(I meant Addams Family, not Hotel Transylvania, for all you rabid fact checkers out there).

Nodarse (WCU): Not sure if that was meant to be a wolf turn, but she had a weird thing with her leg…saved it, though. Front tuck, wobbles but stays on. Same with her series. Back double full, most confident part of all. 9.750

Boyd (WCU): Excited to see this one in person. Front aerial, leg goes up and she’s off. :/ BHS BHS series much better. Gainer pike stuck. 9.225.

K. Johnson (ex. for WCU): Beautiful series, no hesitation on back tuck. Rounding up for the dismount, will we see the double tuck? She does it but has to step back a million times and almost goes off the mat. Super great otherwise, and hopefully she can rein the power in on the double tuck to get that in the lineup yesterday. 9.275.

WCU had a bit of a Balance Beam Situation, which is unusual for the Rams. Springfield has some really fun, shining routines on floor, and RIC is getting there with the power on its vault landings.

Waiting on scores for that rotation.

Skerl (RIC): Bail is a little off, good last handstand, double tuck chest down but gets the landing. 8.500

Silva (RIC): Handstands a little off, into bail, double back step forward.

Schwab (Springfield): Half on back layout, good landing. 9.400

West Chester came through in the end with a crowd-pleasing floor rotation, but an off day on bars and beam was enough to make the Golden Rams ready to forget this one. RIC was consistent on bars but ultimately came up around three points short of last week’s big 180+ day. Springfield ended with some big vaults to get a season high team total.