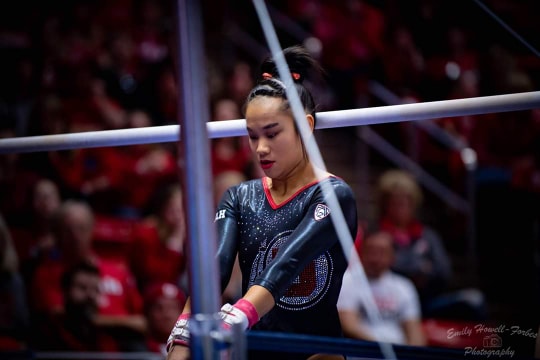 Because I’m in a weird place this season, this is the first Utah meet I’ve watched, but I’ve watched every Arizona meet and this is my fourth time live blogging the Wildcats. Don’t judge, OK?

Anyway, Arizona is in a great place this year. It’s fifth in the Pac-12, which is wonderful! Utah is also in a great place, particularly rocking it out on vault and beam despite beam being such a sticking point last year.

This obviously isn’t a meet where we’re looking at major upset potential, and neither is chasing a landmark score either (though keep in mind that Utah is holding Denver off in the rankings by a VERY fine margin and scoring below its average is dangerous). It’s more a matter of adding good scores in preparation for NQS, which is terrifyingly on the horizon now.

Plus, there are a few lineup questions. We’re still not sure on the timelines for Kennedi Davis and Courtney Cowles, both of whom are missing and presumed injured at Arizona, and we’ve heard that Jillian Hoffman at Utah is approaching lineup readiness.

Nosek (Arizona): Solid full, not much amplitude and a little hop. 9.7

Reinstadtler (Utah): Blind to Jaeger, a little close, bail looks like her hips are a little closed. FTDB with messy legs in the first salto, close to stuck. 9.875

Leydin (Arizona): One and a half, big with a midsize hop forward. 9.85

Tessen (Utah): Blind to pike Jaeger, great. Hitting handstands, bail is top-notch. FTDB is lower but good with a hop back. 9.9

Hoffman in the exhibition, toe on to Tkachev a little messy, missed a handstand, bail is all right. Double layout with leg separation and a hop.

Not the special bars rotation Utah has been able to produce elsewhere but still very good. Arizona survived vault, which is never going to be a massive strength. Bars is, though.

Leydin (Arizona): Toe on to Pak, big leg separation, blind to Markelov with more amplitude than her usual with a little bit of feet. Blind full double back tons of distance and a hop forward. 9.75

Swanson (Arizona): Shy on the first handstand, blind full to Tkachev. Pak with leg separation, double layout with just a little leg sep and a stick. 9.8

Hendrickson (Arizona): Blind to Jaeger to overshoot, messed up the catch and hangs on but major form break as she casts out of it. FTDLO dismount is good, step. 9.575

Kane (Arizona): Blind to Jaeger to overshoot, good. Blind double front  with a step. Good one.

Berg (Arizona): Blind to pike Jaeger to overshoot, so airy. FTDB drilled. One of her absolute best.  9.950 and that’s a bars title for her.

Sirena Linton in the bars exhibition for Arizona, good Tkachev, shy on a few handstands. Almost goes over to the side on her blind full and then sticks the double back.

Arizona not dropping too far behind. Utah got hammered on vault landings there—I always notice that Arizona judges aren’t impressed in the slightest by 10.0 starts, regardless which team they belong to.

Faith started a nice interview with Coach Court in which his microphone unfortunately wasn’t on, and then they tried to fix it by killing audio for the whole stream!

Isa (Utah): Double back good, one and a half front lay with a bigger step out. Switch side Popa, double pike great. Looks a little gassed but smiling. 9.85

Hargrove (Arizona): Good acro series, cat leap side aerial, full turn, getting through well. Split to sheep nowhere close but her knees are at least together, one and a half a little lock legged and hops.

Brovedani (Arizona): Front aerial, big bend to hold it, back tuck deep. Question if they give that to her. Full turn, switch half to beat, got the dismount. Okay, judges… 9.75 okay, feeling generous.

Davis (Arizona): Coming back from the flu! Triple series, bit of a lean, split straddle 3/4 hit. Kick front to beat, full turn, one and a half dismount clean with a hop forward. 9.825

Soloski (Utah): Double lay, that one always frightens me, just not high enough. Something to split full, front lay front full. One and a half front lay, nailed it. 9.95

Cowles in the exhibition!! she’s not injured! <3 She went down on floor a few weeks ago and I was worried. Good for her, good hit today.

Not a good beam rotation for Arizona by any stretch but avoided taking too much damage, it’ll still be able to get a good score out of this. Utah pretty much on the pace we expected.

Burch (Utah): Had a stream issue and missed this one

Davis (Arizona): Front double full great, hit her leaps, one and a half front layout is awkward with a shuffle but stays on her feet. 9.8

Randall (Utah): BHS LOSO, one of her better sheep jumps, orphan sissone and a Rulfova. One and a half stuck. 9.875

Isa (Utah): Kick front to beat, BHS LOSO LOSO with a lean but gets it back. Full turn with a little check, straddle straddle 1/4. BHS gainer full with an odd check. 9.825

Paulson (Utah): Got a 197 already, she’s just bonus. Side aerial LOSO, switch split. Full turn, low choreography ciuld be cool but she looks in danger of falling so that could be better. Cat leap side aerial back full close to the beam. 9.925

Leydin (Arizona): Can bump the Wildcats over 196. Front through double back, tiny rebound but gets it to lunge. Switch side split full, tour jete half split full pretty. Double pike, few steps back, can’t tell whether she stayed in bounds.

Reinstadtler in the beam exhibition.

Few weird flickers for Arizona on floor ruled out a 196, but it’s good to know that Kennedi Davis and Courtney Cowles are fine and GREAT that a score this high from pretty much a bad day is possible. Utah should feel great about its first trip out of Salt Lake City this whole year. What a day from Soloski!