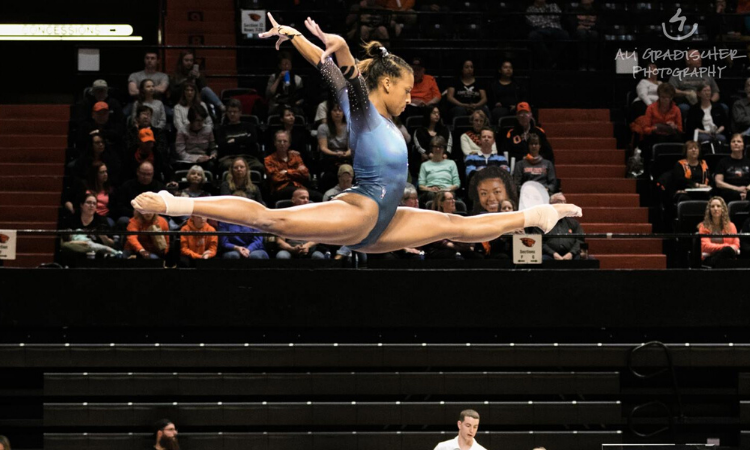 If I won the lottery, I’d relocate to Greensboro and constantly bug the Atlantic Coast Conference to start sponsoring women’s gymnastics while simultaneously giving generous donations to several key ACC schools to fund the creation of their programs. But alas, I do not play the lottery, so instead I’m doing this live blog because it’s the closest I’m going to get to seeing ACC gymnastics anytime soon.

North Carolina’s season so far is playing out in predictable fashion: The preseason was filled with talk of exciting recruits coming in that seem poised to make the team competitive for a spot in regionals, then came a few key injuries, and now the Tar Heels are struggling to put together a clean bars rotation once again. The loss of highly touted freshman Hallie Thompson to a torn ACL before the season began was a huge blow, but it still feels like this team has the talent to go 195-plus consistently. Yet the season high so far is only 194.775. It’s never too early to think about NQS, so UNC’s goal for this road meet should be 195 or bust.

N.C. State has hit that 195 mark, but just once in its first three meets. The other two scores—193.800 and 194.425—both came on the road and should hopefully be dropped with five more road meets to go, but they need to take care to stay the course and not have any major setbacks. Senior AA leader Drew Grantham will be key to watch, as will junior all arounder Lauren Kent and a pair of stellar freshmen, Emily Shepard and Chloe Negrete.

The meet can be seen on ACCNx and scores can be found here.

I’ve been spoiled by SECN meets, because it’s 7pm on the dot and I’m expecting the stream to be up and running and the action to start any second. But alas, I’m stuck listening to this awful music that has no transition every time it repeats every four seconds.

Oh hey, stream is live at 7:01. Not too shabby. Rachel Garland and Andrew Sanders on the call.

Cox VT: We didn’t see it but she did a Yurchenko tucked full, per the annoucers. 9.7

Williams UB: Long delay before the start. Has to muscle up first handstand, then catches Jaeger on her fingertips. Short on last handstand. Nice double layout with a step back. 9.6

Kent VT: Hand slips on the table and she crashes her Y-full. She looks a little shaken up. 8.875

Silverstein UB: Falls on her Jaeger, so UNC is already counting a fall. Gets right back up and finishes the routine. Pretty nice DLO with a hop forward. 8.65

Shepard VT: Very nice Y-full, great distance, very clean in the hair. She hops in place a bit so not a stick. A little piked down on the replay. 9.825

Aldridge UB: Hard fall on her shaposh, landed on her upper back/neck. Scary fall. She gets up after a minute or so and won’t finish her routine. From live scores it looks like she’s not getting a score.

Beucler VT: Leg separation on the block, nice Y-full otherwise. Hop in place on the landing. 9.8 (career high, per Twitter)

Donaghy UB:  Beautiful Jaeger, short on almost all her handstands. DLO with soft knees and leg separation, small hop in place. It’s good to see a hit routine after that scary fall. 9.775

Negrete VT: Huge Y-full but can’t control the landing and has to take a couple hops back. 9.7

Culton UB: Nice bail handstand. Full turn to Tkatchev is pretty. FTDT is nice in the air but she lands a little short and has to take a large step forward. 9.825

Gneco just added another fall for UNC in exhibition…and the announcer just said “exhibitionist.” Twice. Can we not do that? Please? I don’t understand why this is a thing.

There’s no way to sugarcoat this: that was not a good start for the Tar Heels. They need to regroup and hit the rest of the meet in order to salvage this short road trip to Raleigh. Meanwhile, NC State’s vault total was lower than last week, so not an ideal start but they at least didn’t have to count a fall.

The stadium DJ is playing “I Want it That Way” during the rotation break so I’m of course being a good millennial and singing along from my living room.

Shepard UB: Nice Jaeger, beautiful Pak. She has nice lines on this event. FTDT with a small step back. Nice routine! 9.825 ties her career high

Allen VT: Y-half, not a lot of distance but pretty god landing, takes a small slide back. 9.775

Grantham UB: Low amplitude on the Jaeger. Loses momentum on her toe shoot. Leg separation on her DLO and lands it low, it looks like her knee touched the mat but we’ll see if they count that as a fall. 8.425 so maybe missed a requirement

Robinson VT: Nice Y-full, slight hop in place but I think they’ll count it as a stick. 9.875

Cox UB: Nice Tkatchev. Toe shoot with a slight loss of momentum. WOW, a nice FTDL dismount and stuck! 9.85 is a career high

Antinori VT: Yurchenko layout, maybe a little piked in the air, big hop on the landing. 9.6

Kent UB: Nice Shaposh but then loses momentum and has to take an extra swing before her Jaeger. Short on her last handstand but sticks her DLO. Her ankle seems okay. 9.9 ties her career high

Brooker UB: Shaposh with a lot of leg separation. Low on the overshoot, then loses momentum on the toe shoot. Almost went over on handstand after toe shoot. DLO with a step forward. 9.65

Nice bounce back from UNC, who actually beat NCSU’s vault total with a 48.875. The Wolfpack, meanwhile, avoided counting the fall from Grantham on way to a 49+ bars rotation. Beam awaits!

We have a hot mic but the only thing I caught was the announcer talking about his nephew playing a computer game so nothing interesting!

Antinori FX: Front tuck through to double tuck, clean landing. Good leaps. Double pike to close and she overrotates it and sits down. 8.925

Foland BB: Front toss BHS LOSO very nice! Switch leap to split jump is solid. Slight wobble after full turn. Front aerial with a bent leg and then a bend at the waist to stay on. Cartwheel to 1.5 dismount, stuck. Nice routine minus the big balance check. 9.725

Dean FX: Front tuck through to double pike, barely stays in bounds after a bouncy landing with a low chest. Leaps are good. Back 1.5 to front pike, some form issues in the air and a little uncontrolled on the landing. Double tuck to end, super high and controlled. 9.8

Nelson BB: Front aerial with soft knees, connects it to a LOSO. Leaps are a bit low. Cat leap to side somi, takes an extra step. Side aerial to back full dismount, stuck. 9.8

Negrete BB: Double wolf turn, a little ragged. Front aerial to BHS is solid. Switch half is a little low in the back leg. Great double twist dismount with a small hop. 9.85 is a career high

Robinson FX: Whip through to a huge double tuck, clean landing. Front full to front layout, some form issues in the air. Gorgeous high leaps. Double pike is slightly low and she has to take a big step forward. 9.825

Grantham BB: Solid leaps. BHS LOSO with a big check but controls it quickly. Side aerial is good. RO 1.5 dismount with a small hop.  9.775

Hislop FX: Front layout to Rudi is high and beautiful. Front layout to front full with a slightly awkward landing but she hides it pretty well. Nice leaps. Huge double tuck with some cowboying and a slightly uncontrolled landing. 9.825

Identical rotation scores of 49.125 for both teams, so this is turning into a solid meet with the one exception of UNC’s bars rotation (I know, I know, you’ve heard this story before). I’ll be sure to let Rebecca know we have a nominee for the “Great Except for that One Event” category on the Stock Market this week.

Summey BB: BHS LOSO is solid. Beat jump to straddle 3/4 is nice. Cat leap to…nothing? She’s repeating it. Cat leap to side aerial, a little off but manages not to wobble. RO 1.5 with a hop forward. 9.725

Kent FX: Clean double pike to open. Good leaps. Back layout half to front layout, solid. Double tuck is a little low but she manages a controlled lunge back. 9.8 is a career high

Allen BB: BHS LOSO, a little off and she has to put her leg up but not a huge break. Good leaps. Hitch kick to side aerial to beat jump, all very nice. Gainer full dismount, stuck. Nice routine. 9.775

Shepard FX: Double pike, camera was a little out of focus so I couldn’t see the landing well but it looked fine. Front layout to front full, good. Double tuck, high and well controlled. 9.875, career high

Nelson FX: Back 2.5 to punch front to open, nice! Immediately followed by a double pike, wow. Solid leaps. Back 1.5 to front pike last pass, a little bit soft in the knees. 9.85, career high

Hislop BB: Front aerial to back tuck with a bit of a pause in between so we’ll see if she gets that connection. Great double stag jump. Another slight wobble between her leaps but it was minuscule. Side aerial to back full dismount, stuck. Some dude in the audience is yelling out for a 10 but it’s a 9.8.

Culton BB: BHS LOSO and falls. Great leaps. Front aerial is beautiful. Side aerial to back full dismount with a tiny hop back. 9.35

Every single AA competitor tonight now has a fall, so that’s interesting. “It’s the first fall for North Carolina since bars” is incorrect, announcer.

Beucler FX: Double pike, great height. Back 1.5 to front layout, clean. Great extension on her leaps. Double tuck to close, a little bit of soft knees on the landing but she controls it well. 9.85

“Beam should be the easiest event”…I think I should just press mute at this point.

This was definitely a tale of two meets: NC State continued their upward trend, scoring 0.600 higher than last week with a season-high 196.250. There is room for improvement but it’s a great meet for them at this point of the season. Meanwhile, North Carolina’s season high came in the opening meet and each score has declined since. This team needs to go back to the drawing board and figure out what is happening with bars. There’s too much talent on that roster to be going sub-194.

Thanks for joining this edition of #ACCgymnastics!