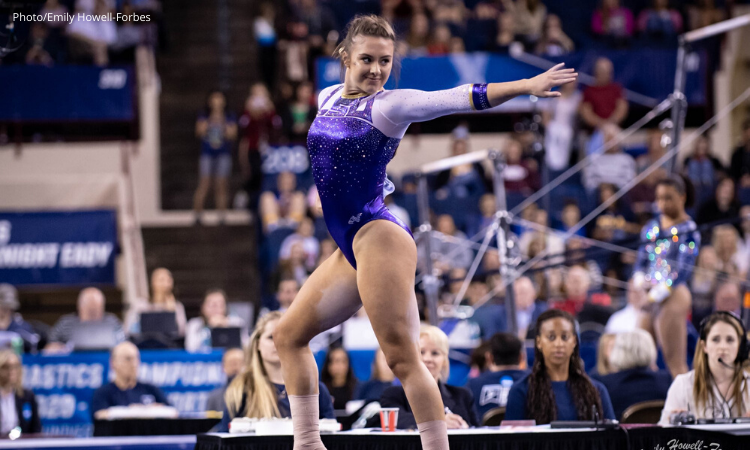 I am so excited for this meet, you guys. I can’t remember the last time these two teams were so evenly matched. Alabama, thanks in part to some of the incredible freshmen on its roster, looks much stronger than we’ve seen for the past few seasons. On the flip side, a more depleted LSU has had a slower start to its season than normal, but it had a very strong showing last week against Florida. Plus, the Tigers boast one of the toughest road environments in NCAA gymnastics, which will undoubtedly work to their advantage. The path to victory won’t be easy for the Crimson Tide, but it is within closer reach than it has been in years.

There were a lot of exciting developments last week: Kiya Johnson scored her first perfect 10 on beam and will be bringing that momentum into this matchup. Luisa Blanco competed in the all around for the first time, showing she is far more than just a beam (and toe point) queen. Will we finally see Makarri Doggette add vault to complete her all around program as well?

I am also curious to see who will be in on vault and floor for LSU junior Sarah Edwards, who is out after suffering an ankle sprain last week.

You can catch the meet on SECN and follow along with live scores here.

I am looking to see if this began on another channel since Missouri and Arkansas hasn’t quite finished yet – hang tight.

Ah, here we go. Also we have lineups and apparently Edney is not vaulting?

Doggette (ALA): Beautiful tkatchev into pak salto, beautiful. One of the most textbook DLOs I’ve seen, tiny hop back on the dismount 9.875

YIKES to that vault rotation for LSU, especially after how great it looked last week. The Tigers will not be happy with how that went, sans Kiya Johnson’s gorgeous DTY. Unclear about where Edney is, or why she wasn’t in the lineup. Nibbs was in for Edwards as we expected she might be. Alabama had a beautiful bar rotation, something they needed to do in order to get any sort of lead anyway, but LSU just blew the door wide open for the Crimson Tide – now time will tell if they can capitalize on that moving forward.

Blanco (ALA): FTY, hop back. Not quite as much amplitude as Mahoney but still nice. 9.800

Dean (LSU): Toe on taktchev, flexed feet but nice. Bail to handstand looked a tiny bit short from this angle. Short on final handstand, leg separation on DLO and hop back. 9.775

Shchennikova (LSU): Good first handstand, messy legs on the maloney. Tkatchev to pak salto looked ok. Lets go early on her DLO dismount that will never not make me nervous. 9.800

LSU came back and closed the gap to a much more manageable three tenths deficit after that rotation. Both teams gave away tenths on hoppy landings and some form issues. LSU being sans Edney and Edwards is definitely noticeable, but if they have clean beam and floor rotations they should still be okay. Alabama basically just needs to keep the momentum going, and they are well on their way to a very respectable road score.

Mahoney (ALA): Double tuck, super controlled. Leap series was good from what I could see, camera angle makes it a little hard to tell. Second pass landed a little short, had to take a step forward. Double pike to finish, lacked control and almost went OOB but saved it. 9.750

Dean (LSU): Had some stream issues but I’m back – front aerial, split jump, solid. Side aerial into back full, stuck but heels apart. 9.825

Durante (LSU): Front aerial split jump, solid. Aggressive and sharp BHS LOSO. Switch, switch side was good. Side aerial to back full dismount, not quite a stick but close. 9.850

Olsen (ALA): Stuck her double double. DANG GIRL. Beautiful leap series. Front through to a double tuck to finish, tumbling was a little slow but gets it done. 9.850

Edney (LSU): Front aerial into split jump, balance check but hides it well and looks like she saves the connection. BHS LOSO was solid. Switch to switch side, good. Front toss, lands sideways but saves it with a smile. RO 1.5 stuck dismount. 9.875

Desch (ALA): Double pike to start, flexed feet but good. Back 1.5 to barani to split jump to punch front, looked good. Leaps were short. Big double tuck to finish. 9.875

Graber (ALA): Tucked full in to start, controlled step back. Straddle leap and wolf 1/1 looked good. Front tuck through to double pike, solid and controlled. 9.900

I hear boos for Campbell’s score, I’m guessing they may not have given the connection.

Both teams had a mostly solid rotation here, but LSU needed more than mostly solid in order to catch Alabama. They don’t have the cushion they expected to have after their vault rotation, so every balance check, step and flexed foot is really making a difference. Alabama had a slightly slow start to their rotation but kicked it up into high gear with the last three routines, with Desch, Doggette and Graber all having fantastic showings.

The Tigers trail by four tenths going into the final rotation, which isn’t an insurmountable deficit but they will be looking for Alabama to make some errors on beam.

Klopfer (ALA): Controlled wolf turn immediately up to standing, which I actually don’t hate as much. Front aerial to BHS, good. Cat leap to side aerial, very solid. RO 1.5 dismount, hop forward. 9.800

Burgess (ALA): One armed BHS LOSO, big balance check and leg comes up. The entire crowd is singing along to Justin Bieber right now. Seems a little rattled and another big balance check on her leap series. Side aerial to back full dismount. 9.800

Dean (LSU): This is her first appearance on floor this season. Double pike to start, lack of control on her lunge back but keeps it in bounds. Very bent knees on her 1.5 to front lay. Almost looked like it maybe was supposed to be tucked. Double tuck to finish, flexed feet, lands very low. 9.725

Doggette (LSU): BHS LOSO, very solid. Leap series started good but she puts her hands down so that will count as a fall. Side aerial to back full dismount. 9.475

Alabama is just giving little pieces away here, and LSU is absolutely going to capitalize on it.

WOW. This is the first time Alabama has defeated LSU in 11 seasons I think, if I heard correctly? Good for the Crimson Tide.

LSU won’t be happy with how tonight went, but this is also not at all what they will look like when all of their athletes are healthy. Their lineups look very different with a healthy Kennedi Edney and Sarah Edwards.

Alabama came close to giving it back to the Tigers on beam, lots of balance checks and little errors adding up that they will most definitely want to work on fine tuning in the weeks to come. Luisa Blanco and Lexi Graber were clutch to end that rotation.