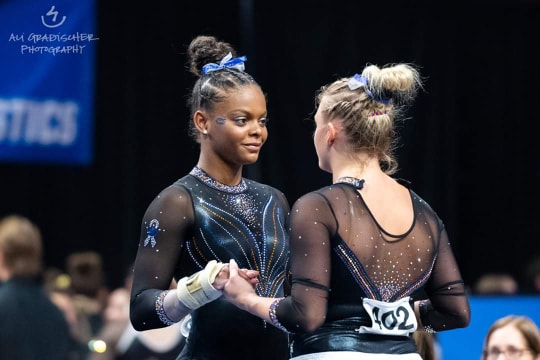 Florida is a really interesting team this year. We’ve seen that its potential is immense (though let’s be honest, that 198.375 was a choice) and that it seems to be driven in a way that the 2019 squad never was. But there’s still a great deal to prove before we can seriously consider a team that missed nationals last year  a title contender, as the Gators undoubtedly want us to. And first on the list is hitting a convincing road meet. While the first attempt, two weeks ago at Missouri, was far from a disaster, it was a stumbling and lukewarm effort. The Gators can do much better; they’re never short on potential, it’s the doing that counts.

Meanwhile, Kentucky had a bit of a white-knuckle introduction to 2020 with so many critical routines to replace, but the sophomores and juniors have stepped up behind a soaring Mollie Korth to buy the freshmen the time they need to settle into lineup spots. There are a lot of reasons to be optimistic about Kentucky’s 2020, and a home meet versus a top-notch opponent today is a great opportunity for a season high.

Richards (UF): Maloney to bail, slightly soft back on the handstand, great handstand on the high bar. Double lay with leg sep within normal range, little hop back. 9.8

Warren (UK): FTY, little soft in the knees and a similar step back. 9.8

Gowey (UK): Ray beautiful, toe to Pak great. Sounds like she pings off the bar a bit but pretty DLO in the air and a little step back. 9.85

Angeny (UK): Vaults the second the camera shifts to her and I almost missed it. FTY, not so much distance but better landing, tiny hop. 9.825

Hundley (UF): Maloney to Pak, her usual tiny leg seps, toe on to Maloney great. Borderline on a HB handstand, FTDB with one foot slightly in front of the other and stuck.9.875

Nixon (UK): Higher and technically superior FTY, a little deep and a hop back. Weight behind her feet made the landing just a little weird but it was a better vault. 9.85

Thompson (UF): Okay, her name is really Thomas obviously but the commentator just said Thompson and I can’t get over it. Maloney to clear hip, Pak, milking the handstands. Double lay with the tiniest scoot. 9.925

Korth (UK): Yurchenko one and a half, weirdly less distance and her weight in front of her feet when she lands, hop forward. 9.875

Schoenherr (UF): Toe blind to Jaeger lovely, held a handstand forever and I started to worry if she could get it back but it was good. Blind double front 1/2 out WOW. Stuck. 9.9, I would have gone higher.

Crashed exhibition vault from Kentucky, Chant hit in the exhibition for UF.

I missed some stuff in the upcoming rotation due to internet issues, apologies!

Skaggs (UF): FTY, pretend stick, works so hard but her weight is just a little too far back.

Angeny (UK) Blind to Jaeger to overshoot, blind full double layout whippy and close to the bar but just a step back.

(UK): Clear hip to Tkachev, loses her legs late in her Pak, wonky half turn on the low bar. FTDB with a step back.

Richards (UF): OOB on her first pass, switch half Popa, front through double back hop to lunge. 9.775

Warren (UK): Side aerial BHS, lean but gets it back quickly. Switch straddle quarter, one and a half twist with a bigger hop forward. Pretty. 9.725

Johnson-Scharpf (UF): Double arabian, got it. One and a half front lay and dances out, looks like shes pulling really hard to get her double back around but lands it really well. 9.875

Patterson (UK): Full turn, takes a long time to gear up for her BHS LOSO but got it really well. Front aerial with a little leg up, switch switch split and it’s impossible to gauge splits from our angle, one and a half with a step forward. 9.85

Baumann (UF): Double back lovely, showing up the landings, one and a half front full with choreography out, Florida planning for bounces out on those passes. 9.925

Korth (UK): Through her acro series and then off on a switch back tuck, no attempt at a save, just never over the beam. Chest forward on her landing and takes a step forward too. 9.15

Thomas (UF): Nailed the double lay, one and a half front lay sissone, tour jete half Popa good. Double pike high and a touch overrotated, lifts the front foot. 9.95

Hundley (UF): Whip double back, Double pike, switch side to straddle 1/1 Shushunova, I’m sure there’s a name for that but I’m blanking on it. One and a half front lay, a little awkward.

Hundley (UF): Check on her aerial, BHS LOSO with a sizable lean. Full turn, surviving, switch split, one and a half twist stuck dead. 9.775

Monfredi (UK): Front through double back, heel looks close to the line to me. Switch side Popa wolf full, double pike. 9.8

Patterson (UK): One and a half front…… attempted lay but missed the position and tucks it to get it around. Switch ring half is actually tolerable, nailed the double tuck. 9.625

Richards (UF): Off a little on her full turn, BHS LOSO LOSO nailed. Switch straddle, side aerial back full with a little scoot. 9.9

Poland (UK): Front FHS Rudi good, front double full comes up short of her sting mat and does a weird shuffle thing to try to figure out where she is. 9.8

Baumann (UF): Front aerial split right on, BHS LOSO good. Switch half a touch underrotated but absorbs it, side aerial, one and a half dismount with a step backwards. 9.9

Worley (UK): Full in, keeps her heel up on her lunge or she’d have gone out. Tour jete half?? to switch side, one and a half front lay stuck. Double pike is good. 9.875

Gowey (UF): Switch split, weird fast leg up check that she gets back. BHS LOSO LOSO with one hip popped on the landing, front aerial sissone good. Gainer full. 9.85

Great day! Some definite soft moments, but this is a much realer score for a good-not-perfect Florida day than last week’s. Good road score, check. Kentucky should be really thrilled with this result – missing a few regular contributors and didn’t blink.