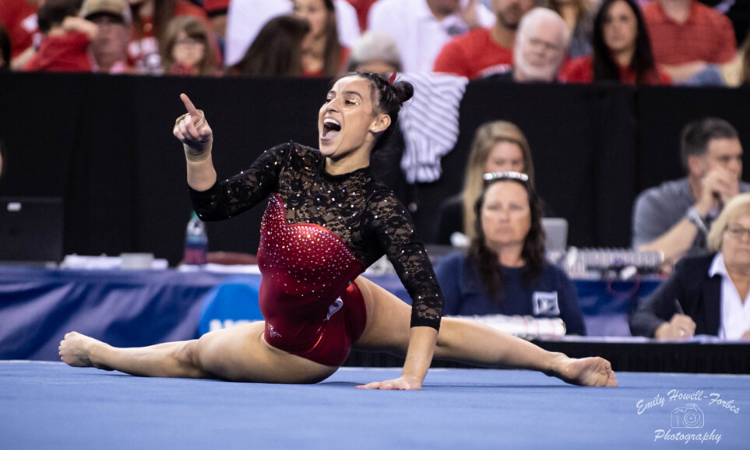 It’s another edition of Friday Night Heights, and we’ve got No. 14 Arkansas at No. 20 Missouri to start your night off right! This should be an exciting matchup, as both teams’ averages are less than three tenths apart and both scored 196.650s in their last meets.

The Tigers are coming off a season high by over a point after three scores in the 195s to start the season. Most of the hype around Missouri this season has been around freshmen Helen Hu—and rightfully so. She’s averaging a 9.925 on beam, has a jam-packed bars set and shows off unique skills and choreography on floor. Senior Morgan Porter also brings a clean and powerful floor set, and sophomore Hannah McCrary has the ability to notch a high score on vault with her Yurchenko 1.5.

Things have been going well for Arkansas under new head coach Jordyn Wieber. She’s a highly touted floor coach, and has already made her mark with the Razorbacks as they head into this meet ranked fourth in the nation on floor. Junior Sophia Carter and freshman Bailey Lovett lead the contingent there, where all arounder Kennedy Hambrick also has an average over 9.800.

Missouri has been fortunate to escape the injury bug so far this season, with Mary Nicholson’s bone bruise the only one to report. Arkansas has been a little less lucky, losing Savannah Pennese for the season with a torn achilles and Amanda Elswick out for an undetermined amount of time with a shin injury.

You can watch tonight’s matchup on the SEC Network and follow along with scores as well!

We’ve got our first look at tonight’s lineups already!

20 minutes out from competition, lineups are in!

Make sure to watch the Gymbacks on the SEC Network or follow along with live scoring here ➡️ https://t.co/9J8yJwtO5p#RISE pic.twitter.com/sPvoT1wFyW

Still no Elswick in the lineups for Arkansas. The Razorbacks have clearly been managing without her, but certainly would love to see her back. This could mean the shin injury is a little more serious than it seemed at first.

Missouri lineups are in! Looks like we will be treated to Hu in the all around tonight.

Sam Peszek is commentating tonight and I love how the SEC Network/ESPN has poached her from the West Coast.

Schreiber (Miz): opens the meet with a Yfull, clean in the air, just a step back on the landing. 9.800

Yamzon (Ark): the perpetual leadoff, clear hip, tkatchev, both hit, small leg separation in the bail to handstand, dismounts with a full twisting double layout and just a step back, small bit of piking. 9.775

Gottula (Miz): second Yfull for the Tigers, sticks it! Not a ton of height or distance but gets a great landing. 9.875

Gianfagna (Ark): great Ray to start, toe on, bail to handstand is a little short, hops to high, FTDT dismount is stuck! 9.775

Hu (Miz): Yfull, piked quite a bit at the end and takes a big hop in place on the landing, easy to say this is her weakest event but gets off to a decent start. 9.775

Brandt (Miz): the broadcast missed it originally but she vaulted a handspring front pike half, chest pretty low on the landing. 9.825

Hambrick (Ark): blind change to piked jager to overshoot, all done well, legs together, hops back to high bar, FTDT dismount and slides back. 9.800

McCrary (Miz): Y1.5, not a lot of power off the vault and comes in short and has to squat deep on the landing and steps to the side. 9.800

Laird (Ark): Ray to start, not a ton of amplitude, misses her feet on a toe on, covers well, nice bail, jumps to high, dismounts with a double layout and finally gets Arkansas a stick! 9.675

Scoring was a little generous on vault in my opinion, but regardless, Missouri did what it needed to do to open its meet well. Arkansas gave away a lot of tenths with the non-stuck landings (especially the double tucks…) and the miss by Laird in the anchor spot. The Razorbacks haven’t taken themselves out of the meet yet, but now have some extra work to do and can’t afford many more errors.

Gianfagna (Ark): Yfull, decent distance, quite piked at the end and takes a sizable hop back. 9.650

Christensen (Miz): giant full to tkatchev, doesn’t even get her hands on the bar, might need to repeat the tkatchev for credit, remounts and repeats and catches cleanly, nice bail, good final handstand and giant full, double tuck dismount with a step back. 9.125

Hickey (Ark): Yfull, really nice height compared to the first two vaults from Arkansas, a bit off center and takes a hop back as well. 9.775

Schreiber (Miz): toe on to toe on shaposh to bail, good handstand, dismounts with a double layout and yet another hop back. 9.800

Rogers (Ark): Yfull, sooooo much height, piked it way down and didn’t need to so takes a step back. 9.775

Shaffer (Ark): Yhalf, beautiful in the air, wasn’t totally ready for the landing and takes a large step forward. 9.775

Hambrick (Ark): Yfull, nice and clean and just a small slide back on the landing. 9.800

Hu (Miz): opens with a Church, a little far from the bar, gets her hands on it but peels off on the bottom of the bar, remounts, repeats the Church cleanly and tries to connect into her Pak but tucks it over to her feet on the ground, remounts on the low bar, toe on shaposh half done nicely, toe full to double tuck and step back, a huge miss for Missouri just when it seemed as if it was going to bounce back from the earlier fall. 8.825

Counting a fall on bars really hurts after Missouri opened well on vault. Arkansas got hammered on vault for height and landings, keeping Missouri in the hunt even with its falls on bars. This will be an interesting final two rotations! Arkansas needs to show off that fourth ranked floor right about now, and Hu getting a 10.0 on beam would be a perfect rebound from that bars disaster.

Yamzon (Ark): opens with a double tuck, small slide back in the lunge, double pike second pass, same slide on the lunge, switch side, to straddle full, finishes up with a front layout to front full, controlled step, a good first hit for Arkansas too. 9.800

A lovely Casey Jo Magee montage here as we wait for the next routine. The Arkansas gymnast turned Missouri associate head coach.

Sheremeta (Miz): beat jump, almost strange to see that skill alone, great bhs loso, hitch kick to switch side, front aerial to split jump, is so confident in all her skills, gainer pike dismount, just a step back, that the hit Missouri needs. 9.750

Hambrick (Ark): some music confusion to open, has to remounts and salute, giant double tuck to open, no problems on the landing, rudi to back layout to jump all done so cleanly, legs pasted together and toes pointed, switch half to popa, stick the closing double pike and this is going to be a huge score in the third spot. 9.925

Porter (Miz): pretty press handstand to start, switch leap to split jump, small pause but will likely still get the connection, front aerial, comes in so short and hops around to stay on, repeats well to get the connection into her back tuck but is off to the side and falls, hops back on into some choreo, front toss, solid, RO 1.5 to dismount, hops forward, things not going well tonight for Missouri. 9.050

Gottula (Miz): bhs bhs loso, was a little off but no problems, switch leap to split 3/4, wobbles but stays on, cartwheel to stuck gainer full. 9.700

Lovett (Ark): beautiful double layout to open, front layout to front full, super controlled landing, tour jete half to split full, good split positions, kicks out of her final double tuck nice and early, a little soft in the landing but Arkansas will be happy with this one. 9.900

Carter (Ark): no problems with her opening double tuck, RO 1.5 to front full, a little low but steps out of it into choreography to cover well, great leaps, sticks her double pike cold, maybe a little low but caps off a great Razorback floor rotation. 9.875

Arkansas once again proved that Wieber is the queen of floor coaching. After a flat vault rotation, the Razorbacks couldn’t have asked for much more. Missouri didn’t rebound so well after bars, unfortunately continuing the falls. Hu hit in the anchor spot, but that doesn’t negate the falls before her. This is going to be a meet the Tigers will want to drop come NQS time.

Yamzon (Ark): cat leap to switch half, solid, bhs bhs loso, looking very confident, dances out of what looked like a wobble in her full turn, low on the front toss but saves it with a beat jump, gainer full and sticks it, the ideal leadoff. 9.725

No Tucker on floor tonight for Missouri after landing short on a double pike in a previous meet.

Gottula (Miz): Sicko Mode music, opens with a double pike, small step to the side, hits the woah before a punch barani to double full, a bit of piking at the end but super creative pass, not a ton of height in the leaps, double tuck to close, bounces back due to a lowish chest. 9.800

Lovett (Ark): candlestick mount, switch leap to split jump to beat jump, great extension, front aerial to loso, small check in the middle, questionable connection alert… gainer pike dismount with a tiny hop forward, will be interesting to see what they do with this one. 9.775

McCrary (Miz): starts off with a front layout to rudi, good landing, double pike, comes out a little early and is a little short, hops forward, nice height on the leaps, 2.5 twist to dismount, takes a hop to the side, thats a hard pass to end with. 9.825

Porter (Miz): attempting to bounce back from a beam fall, opens with a big double pike, slides back in the landing, RO 1.5 to front layout, really nice position in the air, good leap series, stuck double tuck to close, finally a hit rotation for Missouri! 9.925

Derrick (Ark): bhs loso, looked fine but takes a wobble, commentators claiming this is a last minute change despite Arkansas having her in the lineup it tweeted hours ago, lol, good front toss, split jump to split 3/4, hits 180 and no landing issues, gainer full, stuck with some right leg movement in place. 9.725

Hu (Miz): front double full, slightly short of rotation so takes a side step, stick her second pass, a little short of 180 in the splits in the leap series, beautiful ring leap, closes with a stuck rudi, chest a little low, such a beautiful performer just a few small issues to clean up before this is an absolutely amazing routine. 9.875

Missouri finally was able to put together a hit rotation on floor, salvaging a score that was not as bad as I thought it was going to be a rotation ago. Arkansas just snapped a 10 meet losing streak, but still has some vault and bars landing issues to fix before its next outing. Overall, both teams were certainly hoping for better performances, but its still plenty early in the season.

That’s all for me! Thanks for following along and make sure to keep your gymnastics-filled evening going tonight with Kalley’s live blog of No. 7 Alabama at No. 6 LSU!