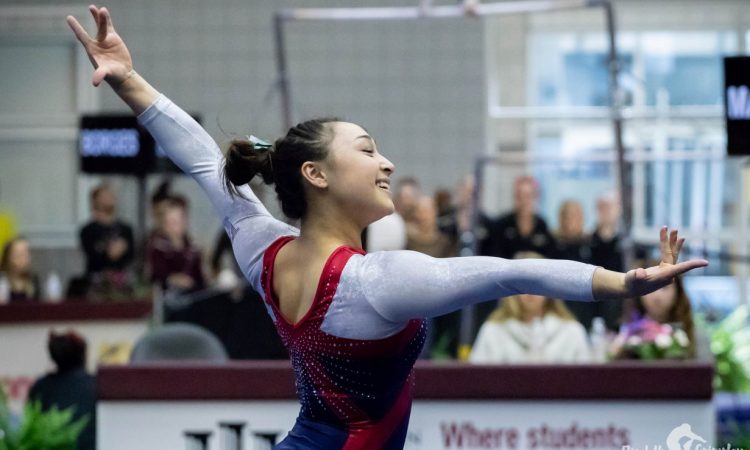 Well go on, Rutgers…a regionals qualifier if the regular season ended today! It’s obviously early, and 36th is a three place drop from last week, but the Scarlet Knights are looking more and more confident under Umme Salim-Beasley’s tutelage. Freshman Hannah Joyner is everything we expected her to be, and teammate Belle Huang is having another banner season in the all-around.

Also exceeding expectations, Penn is ranked first out of the ECAC’s DI teams, and while they counted errors last week. While they still improved on their season-opening total by over a point. Sydney Kraez continues to be a bright spot in the all-around, coming in just under a 39.000 last week. It should be an interesting battle for the four event crown.

Notably, this is Rutgers’ second meet of the weekend after an away meet at Michigan on Friday. Travel fatigue for the away team could be on Penn’s side today.

Graber (Penn): Yurchenko layout, chest slightly down and a step back. 9.500.

Drauss (Rutgers): Big air on the Jaeger but just isn’t close to the bar at all and falls. Pak is much better, beautiful position. Love her lines. Full turn into double back with a hop. 8.825.

Having some issues with the live scores and I can’t see the score from vault and bars…bear with me! Oh whoop, they’re back. Bet.

Huang (Rutgers): Beautiful first handstand. Little short on the next one into the Tkatchev, but good. Some form issues on the last handstand, looks like she had to save it. Double back small step. 9.300. Handstand got hammered then.

Joyner (Rutgers): Catches the Jaeger after a fall in warmups. Nice last handstand, Full-in with a small hop. Really good. 9.675.

Farrell (Rutgers): Missed the first part and I hate myself for it. Handstands looked good, I thiiiiink she held the stick on the double back. 9.750.

Rutgers didn’t have to count a fall, but they did have an uncharacteristic Huang error that’s basically the equivalent. But the Scarlet Knights take the lead.

I need to channel the energy of Rutgers’s focus board for the rest of this meet.

Betancourt (Rutgers): Yfull, good landing just a little bit to the side. 9.625.

Kothe (Penn): Catches Gienger, great position on bail. Off on the last handstand, pirouette into double back and a stick. 9.325. Must’ve missed something.

Williams (Rutgers): Another big full, doesn’t get the height of Duffield but a good landing. 9.725.

Joyner (Rutgers): Yfull, best landing of all, just a small shuffle. 9.800 first of the day!

Kraez (Penn): Good form on the Jaeger, some crazy legs on the bail, nice last handstand, double back stuck. She’s having that kind of day. 9.750.

Huang (Rutgers): Y1.5! Wasn’t sure if she’d go for it after sitting in warmups but it was pretty good, very legit distance. 9.775.

Flavin (Penn): Jaeger very close but caught. Bail looks like she might have to hop off but she doesn’t. Good save. Dismount nice.  8.950.

Mills (Penn): EXHIBITION. Nice first handstand. Piked Jaeger has to bend her legs a bit. Missed dismount but a stick I believe. Work in progress but that could be legit.

Penn had to count some undesirable bars misses, but you have to admire their tenacity and ability to save. Rutgers popped off with their landings; I’m especially excited for the progression of Huang’s 1.5.

Joost (Penn): BHS LOSO series is off from the start with some bent legs, comes off. Punch front to beat, some hesitation but good save. Doesn’t quite hit leaps. Punch front full, tiny step. 8.925.

Betancourt (Rutgers): So hype for this rotation tbh. Whip to double pike, landing way off and she’s on her chest. Music stops. She’s carried off. Hoping for the best.

Lashley (Penn): Missed the first half, back 1.5 tiny hop. Leaps looked good, sells the choreo, Rudi almost stumbles out of it but saves it. 9.525.

Matsuda (Penn): Switch to back tuck, tiny check. BHS LOSO perfect landing with some legs. Switch half to split jump, some slight hesitation. Side aerial to back full, small step. 9.700.

These Rutgers floor scores coming in at a snail’s pace. Apologies.

Duffield (Rutgers): Whip to double pike has to step back a few times, off the mat. Double tuck high but a little jerky on the landing. Good last pass. Hit. 9.350.

Joyner (Rutgers): Double pike hop back. She’s iconic. Big switch leap. Back 1.5 to front lay. Some hand clap chalkography, okayyyyy. Back 1.5 to front pike. THINKING it’ll be a big score but not sure at the rate this judging is going. 9.675.

Huang (Rutgers): Her same music from last year, yesssss! Front double full controlled lunge. Rudi to BHS, Straddle to wolf jump, this is really one of my fave routines in NCAA, let’s have that conversation!! FHS to rudi, lovely. 9.825.

Rutgers recovered decently well after a scary routine, and the scores don’t quite reflect how well they performed under pressure. Penn had a pretty good rotation on beam, didn’t have to count that first fall and ended with a Yang exclamation point, as per usual.

Flavin (Penn): Double tuck mega-cowboyed but lands on feet. Back half to front full. Leap series doesn’t quite get to where it needs to be. Hollaback girl for the last part of the routine, we’re stanning. Front 1.5. 9.400.

Drauss (Rutgers): Rare to see her in this lineup. BHS LOSO, hesitates but stays on. Side leap chest forward, saves it again. Switch half much better.  Back 1.5 small step back. 9.775.

Karpousis (Penn): Front tuck through to double back. Beautiful double pike to end. 9.550.

Doherty-Herwitz (Rutgers): Front aerial to side aerial, good. No one should be subjected to doing beam while “Dance Monkey” is on, and for that, I’m sorry for her. Missed dismount but a small step back. 9.575.

Matsuda (Penn): Double pike, a little low but good landing. Front lay to front half. Good straddle position on leaps. I love this music. Double tuck, looks good but she bounces forward and puts her hands down. That was flukey. 9.700.

Joyner (Rutgers): BHS LOSO some legs but stays on. Textbook leap position on switch to switch half. Small movement on 1.5 dismount. Totally worth the hype. 9.900 whoooop.

That’s a 9.950 for the Rutgers beam program record!

Rutgers performed admirably on a double meet weekend, and Penn recovered nicely from some misses earlier in the meet. Bet you didn’t expect an away team to set a program event record though, did you?