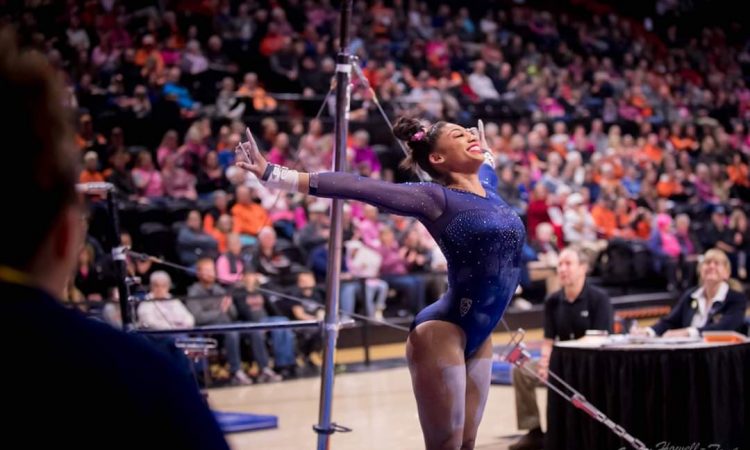 This match-up is much closer than the weekly rankings would indicate: Washington’s home opener on Monday was a significant improvement over its first meet, and the Huskies were lying No. 16 in the daily rankings in the aftermath. That said, Cal was spectacular in its own home opener, looking imperious on bars and floor to produce an amazing mid-197.

If Washington wants to have a chance, it will likely need the Bears to make mistakes, but it will also need to clean up its act on beam. Traditionally its strongest event, it couldn’t quite produce that old certainty through most of 2019 and now the Huskies look outright nervous. That’s not a good sign versus a Cal squad with so much confidence and momentum.

As an aside, Washington head coach Elise Ray-Statz could give birth any day now, so it’ll be interesting to see if she’s on the floor tonight. Chad Wiest seems to be taking on head coach duties on the floor at meets when she’s not available.

Tentative lineups for this afternoon's meet.

Per Washington, live stats are down.

Hoffa (UW): It’s her birthday! Great FTY, wide stance as she lands and a near stick, tiny step back with one foot. 9.775

DeSouza (Cal): Blind to pike Jaeger to overshoot, FTDB with chest down and a little hop forward. 9.8

Copiak (UW): Great full, she’s improved her form so much, hop back. You can see a touch of leg sep in the replay. 9.75

George (Cal): Over on a handstand, jumps off. Tkachev, comes off, off a third time on nothing at all. Salutes and peaces out. 6.75

Cunningham (UW): Twisting on a little but pretty full with a smaller hop. 9.8

Schank (Cal): Blind to pike Jaeger to overshoot, great, tiniest shift of her heels on the double lay. Lovely. 9.925

Roberson (UW): Good full, step back and scoots the front foot. Money gun for that. 9.825

Watterson (Cal): Pak, toe on to van Leeuwen with a touch of feet, toe blind full double back stuck. Coach Janelle is losing it and she’s not wrong. 9.925

Bordas (Cal): Blind to Jaeger to overshoot, bit of legs on the Jaeger catch, blind full double back chest a bit low but stuck. 9.925

Shockingly good Washington bars rotation – it’s an event that’s often been a pain spot for the Huskies. Great resilience from Cal to bounce back after the George issue.

Per Liz Crandall-Howell, Kyana George is totally fine, caught her ankle a bit but it’s not an issue.

The Howells are running around making lineup changes and we don’t know what the change is, which I love. Oh, Quinn traded for Schank!

Bordas (Cal): Pretty full, huge hop back and an arm swing. Um, hold on, apparently someone walked in front of the judges and she gets a redo at the end?

Nelson (UW): Blind to Jaeger to overshoot, a little soft on her overshoot catch. Blind full double back, hop back. 9.725 is mean and trash.

Brooks (UW): True Shap to clear hip to bail, short on a blind full, double back with a hop back. 9.8

DeSouza (Cal): One and a half, leg form throughout and a big hop forward. 9.8

Roberson (UW): Cast over to pike Jaeger to overshoot, lovely, double lay with a hop back. So clean. 9.875

Bordas (Cal): Redo time! Her elbow is taped too. Similar full to her first, little leg sep, smaller hop back than the first time.

Washinington could be in this if we get classic Washington beam not junky Washington beam. Lots of weirdness happening for Cal today, but getting through with good scores.

DeSouza (Cal): Double pike, little shuffle into the landing, switch side Popa. One and a half front full great, Rudi with a big scoot back. 9.75

Washington (UW): BHS LOSO tentative, side aerial, off on the landing and misses the leap connection. Switch side straddle straddle, that’s her contingency plan if she misses the aerial connection, good full turn. Side aerial tuck back full stuck. 9.825

Ruttan (UW): Side aerial LOSO done, switch split, really secure today. One and a half dismount with a hop forward. 9.775

Quinn (Cal): Rudi with a big scoot back, front lay front full with a rebound disguised successfully as a massive stag leap. Switch tour jete full not rotated properly, one and a half punch layout barani, punch looked a bit messy. 9.825

Bordas (Cal): Full in, chest low but good lunge. Switch half wolf full not rotated, Rudi and hangs onto the lunge, one and a half front lay. 9.875

Clausi (Cal): Full in, chest down a touch. Switch side Popa, one and a half front full really good. Double back good. Really good. 9.95

Mastrangelo (Cal): Full in, drastically underrotated and falls forward. Looks for a second like she might be hurt but moving on. Two and a half pretty good, switch side Popa very much not rotated. One and a half front lay step back.

That is the Washington we’ve been waiting for. Ray-Statz looks thrilled. Both have a look at a 197, which would be massive for the Huskies and impressive for Cal after a pretty scattered meet.

DeSouza (Cal): Straddle sheep, short of position, front aerial, BHS LOSO good. One and a half dismount with a hop in place. 9.875

Ruttan (UW): Two and a half, cross step but all right. One and a half Barani double stag, tour jete full with a bit of a bounce out but fully rotated. Double pike underrotated, step forward. 9.725

Washington (UW): Double back, great, keeps the front foot down. Front lay front full, dances out well, double pike and kept the front foot down again. WOW. One of her absolute best, great from an athlete prone to overrotating. 9.95! Not mad. The usual errors weren’t there today.

Hoffa (UW): Might get a 197 as a birthday gift. Commentators are saying 9.85 wins it. Full in, such a beauty in the air, great landing. Front lay front full, nailed it, tour jete half wolf full. Double back. It’s done. 9.975

I pretty much wrote my recap on Twitter, so here ya go.

A lot to be proud of for Cal too. A lot of weird fluke things went wrong today and the Bears kept going. A second 197 at this point in the season is very impressive.