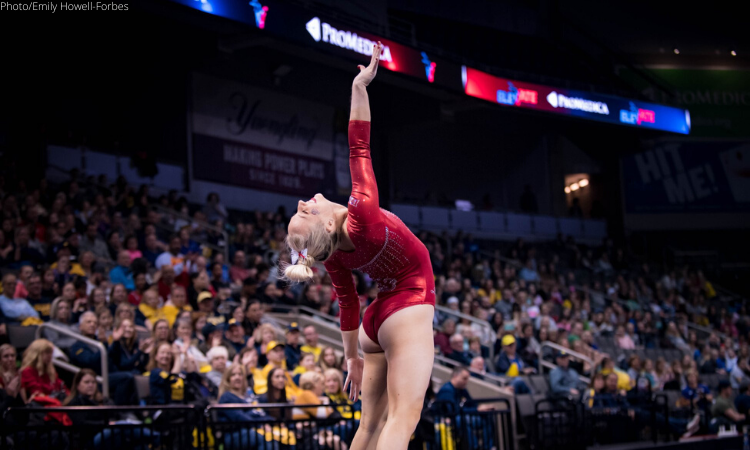 Maryland has been on fire so far in 2020. The Terps have gone 48-for-48 in their first two meets. They’ve been strong, as always, on bars, and strong enough on the other three to make some waves. If they can keep on 196-plus pace, some of their Big Ten foes will be nervous. Maryland took down Iowa for the first time since joining the conference last time out.

Ohio State, on the other hand, has had some big hiccups through its first two meets. Its 2019 beam woes have bled over into 2020, and strong bars and floor rotations haven’t been able to make up the difference. This is a 196 team that can challenge Maryland, if it hits. That’s a big if, though.

Central Michigan got off to another strong start in the MAC, and is as dangerous a team as ever. The Chippewas are absolutely capable of beating both Big Ten teams here. They’ll be looking for a high-195, or a 196 for a big hit.

Well, we’re one minute past the hour and the stream hasn’t started. Par for the course.

While we wait, here is Maryland’s very spirited leo. We appreciate the Terps’ commitment to their flag!

Reppin the BEST flag in the B1G pic.twitter.com/X8GhBBklDm

This meet is a military appreciation shindig, so I have to think some sort of National Anthem ceremonial something is what is holding us up. BTN+ meets are always late, but we’re going on 10 minutes here.

Maryland just tweeted (13 after the hour) that folks should tune in now so my hopes are up that we’re about to roll.

HEYO WE HAVE VIDEO.

Demarinis (CMU): Bhs loso knees in both and a check. Switch side, good. We cut away for a replay of Rowland cool cool. 9.7

Lowe (tOSU): Aepli is a hype machine at the end of the runway. Yfull, better hips, small hop, some very obvious foot form. A better vault overall, though. 9.725

Tong (CMU): Bobbled a touch on the full turn. Side aerial 1/1, stuck. Glad we didn’t get to see the rest of that.

Well this is off to an interesting start. The Chippewas were very unsteady on beam, and have some ground to make up to be sure. Bars is Maryland’s strongest piece, so this score is fine but probably not as high as it would like. Ohio State’s score is right about in its sweet spot on vault, so the Buckeyes will be pleased.

If you feel like this meet is slow, correct. Very. Yes.

The camera is just wildly jumping around. I don’t know why.

We’ll literally get two seconds of someone waiting to mount the beam, then a half second of a floor routine, followed by jumping into the middle of a bar set. I’m losing my mind.

The stats feed is all over the place and wrong, too, so. Everything is FINE.

Peterman (UMD) Bhs loso good. Side somi she has weird technique but no movement. Switch low back leg and a check. Split + straddle 1/4, all short of 180 aaaand we’re cutting away!

Demarinis (CMU): lol we cut away immediately. Came back in time to see her crunch her landing on her combo pass a bit. Double pike, low chest and lunged forward.

Aepli (tOSU): Toe hand to Maloney clean backswing to bail hand, good. Half in half out stuck. Wow! 9.925, correct

Farina (UMD): had a fall on her series, and is quite off. Maryland’s first miss so far this year.

Miller (tOSU): Missed her Maloney, fell trying to repeat it.

Pedrick (CMU): Ha we cut away as soon as she saluted to see Edwards bars exhibition, which is going well. Pedrick nailed her 3/1 in the background, and now we’re seeing replays. I am not amused. Okay Pedrick again, her combo pas was solid. Fun choreo for her as always. Double pike to end, slightly uncontrolled lunge.

Well this is very interesting. Maryland’s first two falls of 2020 came in the same rotation, so they’re counting one which left space for Ohio State to snag the lead. Central Michigan was good on floor, but it wasn’t enough to overcome its start on beam. The Buckeyes have struggled on beam so far in 2020, and it seems cursed here today, so hold onto your hats folks, because anything can happen in this next rotation.

Johnson (CMU): Yfull, some pike and a hop.

Schweitzer (tOSU): Front aerial with a big bend at the hips. Bhs loso nice knee extension and clean landing. Switch + split the second was short of 180. Ring jump, not there on the position, dropped her shoulder a touch. Side aerial 1/1 stuck. 9.475, ring likely not credited.

Demarinis (CMU): Yfull, closed hips and she twisted onto the table.

Swartzentruber (tOSU): Lovely and clean bhs loso. Cat + front toss + beat, got those connections. Switch + split 1/2, short on both splits. Gainer 1/1 off the side stuck.

Pedrick (CMU): DTY, some knees and hip angle, hop to the side.

Rouse (UMD): Bit of a wait for her. aaand we’re cutting away. Got replays of her passes, they were all clean with a bit of a foot slide on each.

Hodges (tOSU): Bhs loso, just a touch off and she falls. Now the pressure is on for this team. The falls can snowball. Gainer loso, clean. Switch jump + straddle 3/4, good 180s. RO 3/2, true stick.

Lowe had a fall on her series, we’re seeing in the replay. So, here we are again.

Jennings did an exhibition on beam, I think her first non-vault routine in college? It was a hit!

Beam. Beam beam beam beam beam. All three teams were crunched in the low 48s here, which is. Not where any of these three want to be! This will come down to the wire to be sure. I’m waiting on Wright’s floor score here to see just where we’re at. And there it is CMU and UMD are TIED! Well then.

LOL I thought we were about ready and the last UMD floor exhibition just started. This is the slowest four-or-fewer teams meet I’ve ever covered. Not an exaggeration.

Rowland had a music delay, stepped off.

Glauber (UMD): Yfull, piked down a bit and hopped back.

Hodges (tOSU): hearing that she overpowered her first pass a bit, don’t know if she fell or not. We’re watching replays yay. OK now she’s live. 3/2 + front lay, good control. Ah, okay she did fall on the first.

Demarinis (CMU): Blind + double front, stepped forward. She pulled in quite close to the bar.

Rubio (UMD): Yfull, pulled her feet together, but they could go stick if they’re feeling it, clean in the air.

Tong had a fall on her release. Toe shoot, full-in, step back.

Hearing Abanto had a big hit on floor.

On replay we saw that Pedrick had a bit of a close catch on her Tkachev.

Aepli (tOSU): Held her combo pass landing. Good leaps. She’s one of the Billie Eilish crew, and it works for her. Double pike, little deep in her knees.

This will be close!

That’ll do it! Ohio State will take this one.