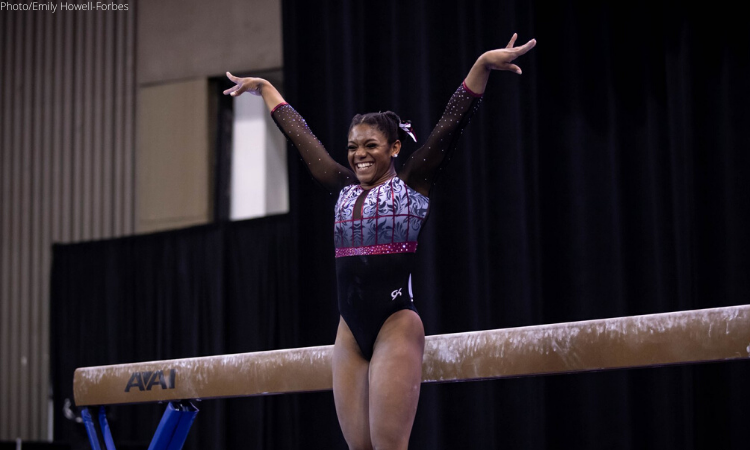 This podium meet is usually filled with some random crack, and there’s no reason to expect this year will be different. Although, we won’t know until after the fact, because this is a Flo-streamed invite so if you were expecting live scores, lol sorry it’s still 1990.

That nonsense aside, this is a fun slate. It’s the Pioneers’ first outing against a team ranked above it this year, and so its first real chance to prove it belongs to sit at the big kids’ table. Alabama is right there, and actually has a higher 2020 high than Denver, a number it put up against Oklahoma. The Crimson Tide will be ready to steal that coveted “No. 4 this spot would put you in the team final” chair out from under Denver should the opportunity arise.

For Georgia, this one is about catching up. Here’s the big stage, the big rivalry; this is showtime. This is a team that needs to prove it can go 197 even without Rachel Dickson, and the sooner the better for NQS reasons.

Oklahoma is on the other end of the spectrum. The Sooners aren’t worried about the teams in the rearview mirror, they’re worried about another 198, and another (or another few) perfect scores. They’re the kid who defines the big kid table. Are they invincible? No. Are they going to score a 198 and win this meet? Probably.

Alright, I’ll eat crow. It looks like Alabama is bringing us live scores! THANK YOU ALABAMA!

Anyway, there has been some Personal Stuff this past week, so I am not emotionally equipped to handle the four streams at once situation; I’ll be blogging off the main feed, and doing my best to get as much from all four teams as possible. I’m sorry please forgive me.

March in time! So I guess we are not in fact going to have first vault on time. Still have four minute touch to go once the intros are done. I assume we’ll get a vault at…7:15ish?

Childers (UA): Nice hit, hop back on her dismount.

Glynn (DU): Solid double tuck to open, little shy on her 180s in leaps. We missed the end to zoom in on Stern’s vault.

E. Brown (DU): Stumbled out of her double tuck a bit. Stepped out on her closing twisting pass.

Graber (UA): Bail hand was great! FTDB, feet apart on landing and she pulls together.

Webb (OU): Y1.5, knees were messy and she twisted onto the table some.

Smith did an exhibition for OU but I missed the vault.

Oakley (UGA): Wolf full with a small arm wave. Bainer bhs bhs loso, great! Big smile for that one. Split + ring and a leg up check. Side aerial, another leg up check. Just rushing things. Cartwheel gainer 1/1, flaired and stuck.

Blanco (UA): Maloney loose back to pak, catches close and does a backhipcircle out, and she comes off. van Leeuwen, little loose in the back again. Half in half out to a step.

L. Brown (DU): DLO went for the stick, waved her arms. Little shy of 180 in her leaps, but she sells them. 3/2 + front lay + split, lost momentum on that pass rather than gaining it, had to muscle the leap, but pretty positions. Some Bad Guy music in the back half. Double pike, hops forward.

Hawthorne (UGA): Bhs bent arms to high loso, with a bobble. Knee to front toss to sisonne, you love to see that composition. RO 3/2 step back. I think she was exhibition?

Perez-Lugones (UGA): She’s such a great dancer. Switch side popa wolf 1/1, falls out of it a bit, good recovery. Double tuck so high, two steps back.

Burgess (UA): Solid on her series, I think a stuck dismount.

Baumann (UGA): Wolf turn 2/1, I like the guts, dances out. 3/2 + front 1/1, foot slid some but she covered it well. Double pike some soft knees but a great landing. Switch ring one of the most legit in NCAA.

Sundstrom (DU): Bit of a wait for her to start. Yfull, pretty body position, hop.

Smith (OU): Fall on her release. Didn’t see the rest.

Lukacs (UGA): Her signature DLO to start. combo pass had good rhythm. She moves much more confidently this year. Wolf 1/1 in her leap connection was a little low and short on rotation. Double pike little short, chest down and a hop.

Vega (UGA): She gets the big podium stage to herself which is correct and I approve. Performing immediately get it. Double pike, great landing and a huge grin. 3/2 + front lay + split, good. Leap series was strong, rotation was there. Tour jete 1/1 was a touchhhhh short. Double tuck, held the steady lunge. Guys, I don’t know. That Tour jete was really the only thing I had.

AFTER TWO: Live scores are not updating, of course! Will let you know what I hear.

WOW name the last quad during regular season when everyone was over 98 halfway. It’s a little crack and a lot of really nice gymnastics.

Subject (DU): Maloney leg sep, bail hand good. Over on a handstand. DLO with a step.

Vega (UGA): Yfull, some knees and a big hop back.

Smith (OU): Bhs loso solid, some knees. Front aerial to straddle is lovely. Big check in her mixed series. Held the landing, feet were a bit far, but she pulled them in.

Nichols (OU): Aerial to split to bhs swingdown, good. Bhs loso adjusted her front foot a smidge. RO 3/2, holds on for a stick.

Blanco (UA): Her carriage is so good. It makes everything she does 10 % better. Massive double pike, great landing. Some rotation issues on jumps. Stuck combo pass. 5/2, short and she puts her hand down.

Nichols won’t be on floor.

Smith (OU): Slight foot adjustment on the double tuck. Barelyyyy keeps her combo pass in, but does. Switch side to wolf 1/1, wolf was a weird position. Low chest on double pike.

Burgess (UA): Yfull, bit of an early twist, step to the side.

Karr (DU): Side aerial bhs, solid. Hitch to side somi, some wonky knees? Looked like she bailed on a side aerial to be honest. RO 3/2 stuck.

Webb (OU): Long wait while the judges figure out what to do with Degouveia’s score. Looks like the SV was 9.800. OK, Webb’s up. FHS 2/1, good landing. Good combo pass. Hopped out of her leaps a touch. FHS rudi to end, controlled lunge.

Graber (UA): Y1.5, really deep knees on the landing, has to take a big lunge forward. It was a great save.

Oakley (UGA): Gorgeous handstand. Blind to Eagle to pike Jaeger. Some leg sep on pak, but lovely shoulder angle. Almost over on handstand, pulls it back, FTDB, good landing.

Deniz (OU): She’s in last second for Nichols, this is her floor debut. Whip 5/2 wowowowow that’s gorgeous. Touch of toe cross but really lovely. Switch ring to tour jete 1/2, good. FHS rudi to split, she smiled in the split. Really nice. Good for her!

Stern (OU, exhibition): Double pike, bounced back a bit, maybe OOB? Split 1/1 + wolf 1/1 the split was wonky in the air and wolf position was off. Good landing on combo pass. Tour jete 1/2 with a suuuper low back leg. Double tuck, deep knees and feet form in the air.