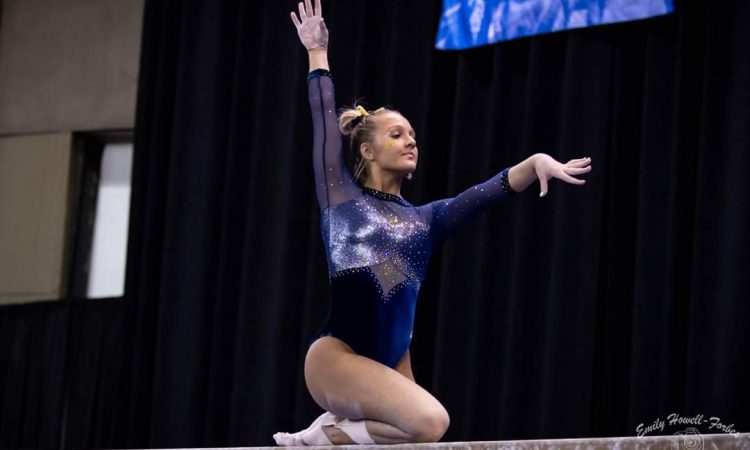 There’s not a lot of suspense in this meet, but it should be a fun one anyway. Rutgers is showing early signs of a breakout season, but it’s hard to tell whether the Scarlet Knights will thrive under the big lights of Crisler or whether their amplitude will compare unfavorably enough to the high-flying Wolverines to keep scores low.

Meanwhile, Michigan recovered from its first-week beam hiccup but is still in the 197 hunt. We haven’t seen the telltale sharpness and conviction yet that you’d expect from a team favored to qualify to national finals, as many fans thought Michigan would be at the beginning of the season. While the unexpected losses of Maddy Osman and Anne Maxim sting, they shouldn’t devastate the Wolverines, and today would be a great day for the 9.9s to start flowing.

And Rutgers is also debuting a new leo!

Mariani (UM): FTY, good amplitude, hop back. Camera was zoomed in so I missed what she looked like in the air though. 9.800

Huang (RU): Toe-on giant. Bail to handstand, fine. Back up to the high bar, comes off on her tkatchev. Giant full into double back, almost stuck. 9.025

Joyner (RU): Giant half into a jaeger, nice. Bail to handstand, legs separate a little. Short last handstand, FTDB dismount with a step back. 9.750

Wojcik (UM): Y1.5, the tiniest hop forward. This should score significantly above the previous 2 vaults. 9.900

Michigan had a solid rotation, but it is giving away too many tenths on those vault landings to really achieve what it is capable of there. Rutgers had mostly good showing on bars, luckily did not need to count the fall from Belle Huang. This is actually its highest score on bars so far this season, so it should be pretty happy with that.

Brenner (UM): Giant half into a jaeger into a bail, nice. Clean DLO, stuck with the slightest lean. 9.85

Brooks (UM): Blind to pike Jaeger, pretty, big bail. FTDLO basically the best in the country with a hop forward. 9.825

Wilson (UM): Soft feet in her casts, blind to pike Jaeger good, bail. Double lay pretty with a hop back and feet a way apart. 9.875

Both on season high pace, though beam is beam. The Wojcik Deltchev was amazing and totally worth the wait!

Farley (UM): BHS LOSO LOSO bent knees but steady. Split split half, small check. One and a half turn is beautiful, side aerial to split. Gainer pike with legs a bit apart. 9.700

Betancourt (RU): Double pike good, switch ring tour jete… quarter? Definitely not around if she meant a half. Front lay front half, double back well done, sort of looked like she attempted another pike just with bad knees which was confusing. 9.65

Mariani (UM): BHS LOSO, tentative, lean but keeps it on. One and a half twist stuck. I assume we missed the beginning.  9.875

Atienza (RU): Double back, runs OOB. Front full front full lands fully out of bounds, double pike with a bit of a bounce. 9.275

Brooks (UM): triple series all right, tentative, switch switch with questionable splits and a check. Kick front and shifts one foot, double back pretty much stuck. 9.9 that’s a “wow you stuck” score.

Joyner (RU):  Double pike great, tour jete full! Front full front lay, mistimed but gets it to her feet. Switch side Popa, pretty, one and a half front lay with a little hop. 9.775

That was a full-on meltdown for Rutgers on floor, which sucks, but it can scrape a decent score out of this meet anyway with a good beam rotation. Michigan is very much in the 197 hunt at this point.

Halbig and Marinez seem to be leading Rutgers in some breathing exercises which I love.

Ferguson (RU): BHS LOSO, leg up but holds on. Switch switch half, lean, full turn. One and a half twist with leg separation and a hop. 9.6

Huang (RU): Cat leap side aerial, check, cross step in front to stay on the beam. Full turn, beat split 3/4, double full dismount with a hop and a step. 9.625

Duffield (RU): Triple series, second foot way off and jumps off to follow it. Straddle half beat jump, one and a half twist with a step. 8.75

I AM LITERALLY FURIOUS

DURING THAT MEET THE COMMENTATORS WERE SURE SHE HAD WON

SHE WAS ANNOUNCED AS THE WINNER

SHE DID NOT WIN

THE ALL AROUND CHAMP WAS ACTUALLY WASHINGTON’S EVANNI ROBERSON

THIS IS SO RUDE

Doherty-Herwitz (RU): Front aerial side aerial steady, good leaps. Gainer full off the side which is apparently very unique! with low chest. 9.325

McLachlan (RU): Big check on a leap, BHS LOSO great. Side aerial lovely, tucked one and a half dismount with a hop. 9.6

Great meet for Michigan! I have some score ordering questions on beam, but that’s a really promising result and it must feel good to be in the 197s. One to forget for Rutgers, but bars and beam looked really good. Bright spots too with Belle Huang debuting her Yurchenko one and a half and Hannah Joyner breaking 39 in the all around for the first time.