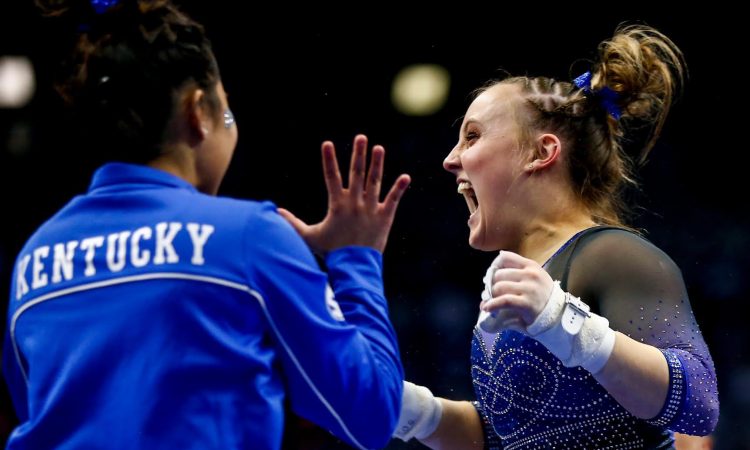 Arkansas is coming off a double meet weekend in which it had home and away meets. Now, the Razorbacks are once again back in Barnhill Arena for what should be a close contest with Kentucky. It’s clear it knows how to put on a show at home, with last week’s debut earning the highest score in program history for a home opener. Tonight will be an important test to judge if that spiked score was a result of Jordyn Wieber Coming Out Party Mania.™️

They’ll need that and more to keep up with the resurgent Kentucky Wildcats, who have been putting up impressive numbers despite a huge routine loss from last year. Freshman Raena Worley has lived up to expectations as the reigning SEC Freshman of the Week, but we haven’t seen much from her classmates other than Raina Albores, who’s done a few events here and there. Tonight could be a tough one for Kentucky, so it will be interesting to see if any new freshmen are brought out to reinforce the ranks.

Yamzon (Arkansas): Yfull, some legs in the air, pikes it down a bit but just a small step and decent landing overall. 9.750.

Rogers (Arkansas): The January joinee brings another good yfull, can’t stick it with a hop to the side. 9.750.

Worley (Kentucky): Tkatchev is a bit close, Pak with legs apart. Love that her nickname is “Worls” because it sounds like “Whirls” and idk I just like it. Full-in and another stick! 9.775.

Warren (Kentucky): Biggest Jaeger so far, really nice. Into the bail, last handstand is nice, tiny tiny hop on the DLO but close. 9.850.

Korth (Kentucky): Piked Jaeger, last handstand a little short. STUCK FTDLO. Should be a big score and Kentucky will get to drop a 9.7-range score for a nice total there. 9.900.

Pretty decent starts for both teams. Kentucky got stick after stick, but Arkansas had amplitude on its side to make up for the lack of difficulty in the lineup.

John wearing the stick crown but on him it just looks like he’s trying to be Burger King. :/ You tried.

Yamzon (Arkansas): Some weird legs on her Tkatchev…but gets it around. Last handstand good into FTDLO, small step back. 9.750.

Warren (Kentucky): Yfull, very close to a stick, might fool some. Piked down a bit though. 9.750.

Gianfagna (Arkansas): REALLY big Tkatchev, catches it pretty close. I don’t like the word “workhorse to describe athletes much. 🤢Full-in with a hop back. Good. 9.725.

Garner (Arkansas): Gienger, misses her hands and falls but kinda twists and lands on her back? Different way to fall on that skill but still safe I guess. Finishes with double back. 8.975.

Patterson (Kentucky): Missed it but it’s a handspring pike half, looked like a good landing. 9.750.

Laird (Arkansas): Not the biggest Tkatchev. Hits her handstands. Finishes with a stuck DLO. 9.900, her third 9.900 mark in as many weeks. A consistency queen…

Kentucky stalled a little on vault, but still some good landings and they have the lead. Arkansas started coming alive with some nice bars sticks, but they would’ve liked a Garner hit.

Some Jordyn fluff but not much new there other than a chance to showcase some nice makeup under those SEC photoshoot lights. Carter’s lipstick was cute!

Miss Val in the booth. Bet they had to drag her in there. Okay I just had a thought…hear me out…Val and Marianne Williamson have similar energy…just me?
Yamzon (BB): Kinda missed this one because I was thinking about my newfound political comparison…please hold…looked like a hit. 9.875, that’s a great leadoff.
Monfredi (FX): Nice double tuck. James Bond music or something…nice straddle position on the leaps. Double pike, chest down but good landing. 9.775.
Gianfagna (BB): BHS LOSO, something of a balance check. Same thing on the front toss. Switch to back tuck, much more confident. Beat to straddle half, definitely warming up as she goes. Hop forward on back 1.5 dismount. 9.775.
Albores (Kentucky): Nice double tuck. Fun music, love the bachata. Front lay to front full, good. Double pike, chest way down, fights but stays on her feet. 9.600.
Lovett (Arkansas): Love her lines. Switch leap to split leap to beat, nice. Gainer pike dismount stuck. 9.825.
Poland (Kentucky): This is a full trap remix of elevator music. Front tuck FHS front 1.5, unique and good. Alrighty then! 9.850.
Hambrick (Arkansas): Beautiful BHS LOSO, so much height! Beat to straddle half, aggressive and a really nice set thus far. The confidence jumps out. Back full dismount stuck! Really impressed with that one. 9.850.
Worley (Kentucky): Tucked full-in, just a small hop. Good ring and straddle position on the leaps. Some slightly more tolerable music. Front full to front lay. double pike big and controlled lunge! 9.875.
Roethlisberger used to know her because she came to his camp…kinda random connection but cute.
Carter (Arkansas):  Beautiful BHS LOSO, this back half of the lineup hits different…a few uncharacteristic balance checks. Does two jumps to make sure she gets connection after wobble on her switch leap. Stuck back full. “Lose You to Love Me” beam music, who hurt you, sis? 9.725.
Warren (Kentucky): Okay a sax rendition of “señorita”…this is laughable at this point. Front double full, really nice. Front 1.5. Back 1.5 to front lay good ending. 9.800. Kinda low?
Shaffer (Arkansas): Front aerial and a big check but saves it. BHS LOSO much more controlled. Tiny hop on back full dismount. 9.550.
Roethlisberger says “I don’t know how you guys do this” to Bridget as though he…wasn’t also a gymnast.
Korth (Kentucky): Tucked full-in. A Kanye routine is about the last thing I’d have expected from this lineup but here we are. 1.5 to LOSO, ends with a strong double pike. That’ll be big. 9.900.

I was really impressed with Arkansas beam in spite of some balance checks that opened the door. Kentucky did pretty well on floor, nothing too flashy but very reliable.

Warren (Kentucky): Just realized she shares a first initial and last name with a potential Democratic presidential nominee, the POWER THAT HAS. BHS LOSO nice…Ends with back full. 9.825.

Yamzon (Arkansas): Joins Nya Reed in the Lizzo “tempo” floor music club. Nice double back. Double pike even better. Always here for her choreo and faces. Front lay to front full. 9.850 will make for a nice AA score for her. 39.225, she and Warren will score the same.

Poland (Kentucky): Triple series, BHS BHS LOSO just a tiny check. Tucked Gainer full, wouldn’t really call it a “crazy” dismount like Bridget but it was a good one. 9.775.

Gianfagna (Arkansas): She loves the second spot like Yamzon loves the first. Double pike nice. Back 1.5 to front lay. Apparently Jordyn changed the arena layout so the floor is right in front of the student section, like that a lot. Double back with chest down. 9.875.

Patterson (Kentucky): Huge air on her BHS LOSO. Front aerial with a wobble but stays on. Beautiful switch leap combo. Stuck 1.5. That was her beam debut. 9.725.
Hambrick (Arkansas): Huge double tuck. Back double full to back layout, that’s unique. Side aerial in the middle of the routine, we’re stanning. Switch half slightly below 180, straddle is better. Double pike. Should be a good one. 9.925!
This is getting pretty tight.
Korth (Kentucky): Nice BHS LOSO, no hesitation…looks pretty confident and will win AA with 9.75+. Stuck back double full, that should do it. 9.875.
Shaffer (Arkansas): Double pike STUCK. Front 1.5 and back 1.5 are both beautiful, maybe not over 9.925 but a great one. 9.900, that’s correct.
Worley (Kentucky): Front aerial to BHS LOSO, she’s really nice on this event in spite of being a VT/FX powerhouse. STUCK back 1.5. 9.850.
Lovett (Arkansas): DLO was as big as I’d expected, very good. Good second pass, oh it’s getting lit. Big double tuck, controlled lunge on double tuck but it’s a big one…should be another good one though…9.900. A quarter of a tenth behind Kentucky…dayummmmmmmmmmmmmmmmm.
Angeny (Kentucky): BHS LOSO LOSO no hesitation. Good on the jumps. Stuck aerial to tucked full. 9.875. Kentucky will win with that.
Carter (Arkansas): Back 1.5 to front full, double pike, her usual beauty but it won’t win for Ark tonight. An FX title will be something of a consolation prize, I suppose. 9.925.

It was truly down to the wire, but Kentucky pulled it out with a much-needed hit from Angeny. Arkansas will love this result if only to tell off the haters who questioned whether last week’s success was just a crack fest. A super fun meet to watch.