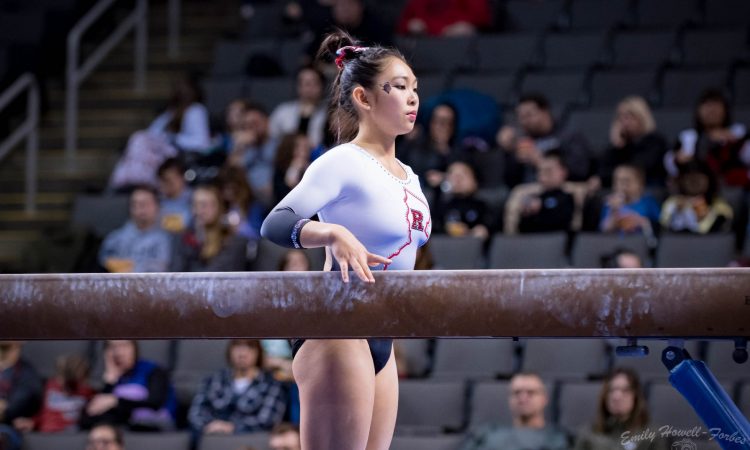 This is the first meet I’m attended this year, and I’m so excited! Rutgers has made great steps over the past year in behaving like a big-conference team, with a new training facility, apparently FIVE new leotards and this very snazzy arena. The gymnastics looks sharp, too. That “33” next to the team’s name is really exciting! Freshman Hannah Joyner went 9.900 on beam last week in her freshman debut, and she can accomplish more.

Speaking of an exciting number, check out Minnesota. The Gophers came up just short against Denver last week, but in the process established themselves as a very legitimate top 10 team and one that will likely be in the fight for a spot at nationals. Lexy Ramler is in cruise control at this point in her career, and with a meet win almost assured, I’m curious whether Minnesota will take risks with lineups (Tiarre Sales on floor??) or go with the steady options and focus on pushing toward 197.

I’m excited to get a look at Bowling Green junior Samantha Marion, a New Jersey native who made her college debut last week and immediately snagged a conference award with two 9.800+ scores. Can she duplicate that amazing day? As for Ursinus, senior Skylar Haas is a favorite of mine.

It’s snowy outside, but there’s a very respectable audience in the RAC including multiple people wearing gear for each team in the arena today. Great to see! Sometimes you don’t even get a

Huang (RU): FTY a touch piked and with leg separation on the table but only a tiny hop. She’s not massively powerful but she’s strategic with what she has and that sets her apart. 9.75

Williams (RU): Another pikier full with a hop back. 9.8

Duffield (RU): Tuck full, was wrong on the table and comes in low, sits immediately. 8.975

Willmarth (Minn): Ray with one flexed foot, great bail. Stalder with bent arms, double back with leg sep and a hop forward. 9.7

Loper (Minn): Maloney to Pal good, shy on a handstand, blind full double back RIGHT on top of the bar but only a small hop. 9.8

Sales (Minn): Bail good, strong Markelov. Double lay a touch deep, holds it for a second and then has to hop. 9.775

Ramler (Minn): Maloney to Pak, her usual, van Leeuwen is a lot cleaner this year than past years. FTDB, hops her feet together a touch but close to her best. 9.85

Montgomery in the exhibition, blind to Jaeger actually pretty good. Misses a handstand, blind to double front, runs back and sits.

Muir (BGSU): Punch front mount I think and runs straight off the beam. I think that was a one-arm BHS to LOSO but people keep standing in the way. Nice leaps, 9.175

Harsch (BGSU): Missed the beginning, side aerial, switch straddle quarter, weight behind the beam, swims to try to hold it but falls. One and a half dismount looked pretty good. 9.175

Worthington (BGSU): Coming in halfway after the Rutgers coaches stood right in front of me to, I think, file an inquiry. Full turn, hitch kick side aerial back full. 9.85 yay!

Marion (BGSU): She was a big deal last week, excited to see what she can do today. Full turn, cat leap switch side, BHS LOSO with a small leg up check. Cat leap side aerial, double full dismount and bounces forward onto her hands. 9.05

I think this is Jones in the exhibition. Punch front mount? RO back tuck and falls. Gainer pike dismount off to one side.

Anand (UC): Double back underrotated with one hand down, great leaps. Second fall on a punch front at the end of her second pass. 8.275

Knapsack (UC): Obsessed with her turning double stag leap, two and a half twist! Tour jete half Popa, she’s got a lot of detail work in her dance. Front lay front full beautiful, double back STUCK. Wow wow wow. Easily on par with the better Division I floor routines we’ll see later. 9.725 is too low tbh.

Not a special rotation for anybody. Rutgers is the team that should be happiest, getting through a weaker event without doing damage. Ursinus and Bowling Green still seem to be getting their feet under themselves, literally, while Minnesota was uncharacteristically and pervasively messy on bars.

Dicicco (UC): Yurchenko lay, never really opens it and rolls back out. 8.725

Drauss (RU): Blind to Jaeger great, hitting handstands, Pak looked a little flat but all right. Double back good with a hop. 9.725

Karolewski (RU): Clear hip to Ray, hits one foot on the bar. Has to recast but keeps going, bail, double lay pretty with a hop. 9.3

Joyner (RU): Jaeger, archy on a HB handstand, good bail. FTDB big with a bit of a rebound back. 9.7

Sonier (Minn): Acro series clean, one-hand BHS to LOSO to one and a half with a step.

Loper (Minn): BHS LOSO, people stood in the way for awhile but looked fine, one and a half twist with a hop. 9.875

Sales (Minn): BHS BHS LOSO is spot on. Switch switch side, love how she spots the end of the beam, full turn, gainer pike stuck.

Ramler (Minn): BHS LOSO, front aerial wolf. Beat to ring, question on the front leg, side aerial back full stuck. 10!!!!!!! Right hand judge had gone 10 on two routines earlier and I just had to babysit left judge for a second there,

Harsch (BGSU): Another 7 Rings. Stumbled back on a double salto, one and a half front lay, missed the last pass. 9.475

Goldstrom (BGSU): Front double full, substantial stagger sideways and just avoids sitting it. Front through one and a half, switch side to wolf 3/2, Rudi looks underrotated and hostile to ankles. 9.4

Jones (BGSU): Front through two and a half twist, I think?? Looks surprised by the landing but not bad. Tuck jump combo, double tuck cowboyed but all right, missed the last. 9.675

MINNESOTA. Didn’t blink in that beam rotation. 49.700 is a program record. Pitty about the junk bars but there’s still 197 potential here. Rutgers isn’t as focused as it was last week but is still on track for a 194.

Goldstrom (BGSU): Yurchenko full, nightmare, lost and lands dangerously on the side of one leg. Thank goodness she’s okay. 8.6

East (BGSU): Got the one and a half, magnificent, hop back, maybe a bit underrotated.

Gable (UC): Clear hip, over and falls. Toe shoot, half turn to overshoot. Doesn’t make it over the bar on a turn and falls again. Got the dismount in the end. 8.225

Anand (UC): Clear hip to Pak, flat but clean, half turn to toe shoot, clear hip to double back with a step.

DiCicco (UC): Full turn to Gienger to overshoot, collapses onto the bar, fall on dismount as well.

Ferguson (RU): BHS LOSO, unsteady but made it. Full turn with a little adjustment, one hand BHS to one and a half twist. 9.725

Higgins (Minn): Front double full, toes close to the corner. One and a half front lay, her acro choreography is unreal. 9.825

Remlinger (Minn): Good double pike, something to front lay a little low. Double back. Good one.

Williams (Minn): Front double full great. Switch side to Popa maybe underrotated, one and a half front lay lovely. Rebound back on the Rudi.

Sales in the exhibition, double pike step forward. Switch side to Popa, wolf full with a scoot, her choreography is really cool. Whip half front full? I think?

Rutgers  did a great, great job on beam there! 194 is easy here. Minnesota is looking at a 197 which would take it to fourth in the country.

Quarles (Minn): One and a half virtually stuck, magnificent. 9.875

Loper (Minn): One and a half, little hop forward.

Lawson (BGSU): Off on her Deltchev, too far from the bar.

Jensen (BGSU): Blind to half to Tkachev, bail. Double lay is VERY close to the bar but lands it.

Snape (UC): Full turn is literally all I saw.

Knapsack (UC): Just saw her pike 3/4 jump which is the only valid one ever.

Williams (RU): Double back unerrotated, step forward. Clean through the rest. My ability to watch four things at once is slipping a little. 9.7

Betancourt (RU): Double pike, step back, arm swing to try to avoid taking a second step back OOB but she can’t help it. Switch ring tour jete half, great, front lay front half close to the line again. Double tuck. 9.45

Duffield (RU): I really like this choreography. Intricate and effective for a gymnast who isn’t so effusive. Whip double pike, lands a bit lock legged but nice easy lunge. Double back underroated, hands down. Switch side split full,  Rudi low with a cross step forward. 8.975

Joyner (RU): Following up a magnificent beam score. Double pike, little bounce to lunge. Tour jete half is massive, steps out with a turn, might have meant a full. Front full front lay, great, straddle leaps beautiful, one and a half front pike. Wow. 9.825

Nice one for both Big Ten teams, a healthy bump over their first meet totals. A lot to be proud of today but obvious places to build. Minnesota missing out of the 197 as essentially a matter of bars amplitude is telling. Meanwhile, Rutgers looks like a very different team this year. Bowling Green had a bit of a mess day and it’s difficult to tell what to expect from it going forward.