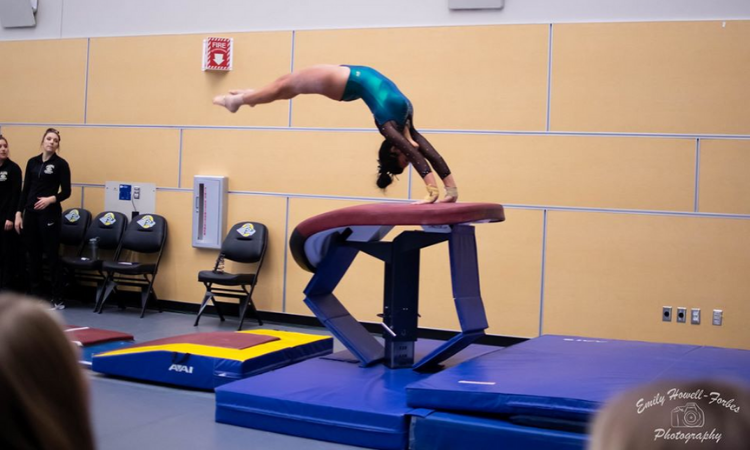 Welcome to an MPSF showdown between the San Jose State Spartans and the Alaska Seawolves!

San Jose State got its season off to a solid start with a third place finish at last week’s NorCal Classic, with freshman Shyan Phillips earning MPSF Gymnast of the Week honors for a performance that included a 9.800 on vault and a 9.725 on beam. Alaska has also started off strong, improving on last season’s debut by over two points. Its freshman, Kenadi Brown, earned MPSF Freshman of the Week after hitting all seven of her routines in back-to-back competitions.

If you aren’t familiar with the MPSF, you’re in for a treat. Don’t let the small rosters or non-cracky scores fool you: Both of these teams have big gymnastics and tons of charm, especially on floor. Spartan Taylor Chan and Seawolf Sophia Hyderally both competed at last season’s Corvallis regional (in fact, Hyderally lost a berth to NCAA nationals on a tie breaker), and have the potential to post 9.9-plus scores.

San Jose State has a big advantage on vault—an event where Alaska is just happy to field a full lineup of any level of difficulty—that should give it the team win barring disaster, but the rest of the individual events are up for grabs.

The meet is being held in Anchorage and will be live streamed at 6:00 p.m. ET. Live scores will be available here, and a photo essay by CGN’s very own Emily Howell-Forbes will be coming later this long weekend.

Well, bummer… Just got word that Shyann Phillips was injured in warm-ups and is sporting a walking boot (no details beyond that). Hoping it’s minor; regardless, sending her best wishes for a speedy recovery!

Pretty sure these are new leos for the Seawolves. Lovely use of green and gold. Also glad they’re showing off that amazing mascot (the off-centeredness is kind of growing on me?).

Orcutt (SJSU): Sorry, my feed glitched and I only caught the end. Good landing on the double tuck dismount! 9.675

Alonso (UAA): Yurchenko layout, slight pike throughout and a big sliding step back. 9.400

Apologies for any misidentified gymnasts or skills. I’m about as far away from Anchorage as is geographically possible, so the feed isn’t the best (grateful for anything, though!)

Robinson (UAA): Big Yurchenko lay, some shuffle on the landing, but big height and distance. 9.525

Knapp (UAA): Yurchenko lay with decent height and a big step back. Seriously, this women has a bionic knee and just vaulted well. That’s impressive as hell. 9.350

Mazury (SJSU): really nice blind change to piked Jaeger. She’s hitting all the handstands. Pinged off on the DLO and had to take a big lunge forward. 9.750

Brown (UAA): The MPSF Freshman of the Week with a decent Yurchenko lay. Similar to Alonso’s, slight pike but good amplitude and distance, big step back. 9.525

Milne (SJSU): Nice Pak (I think!). Beautiful handstands throughout. Some leg sep on the DLO, but great landing. 9.875

Fox (UAA): Yurchenko half with some knees throughout and a bound forward on the landing. 9.500

Gin (SJSU): Way out of control on her Markelov and comes off, too bad. Little shy on the last handstand. Good DLO with a small hop forward.

Good starts for both teams. For Alaska, that means no falls (the vault situation just is what it is). Robinson’s vault was the best, so glad to see her rewarded. San Jose improved on last week’s bars score by over seven tenths, even with Gin’s fall; they should be very pleased with that result.

Also, big shout-out to Alaska’s cameraperson for lingering on the scoreboard long enough for me to get all the data because the stats page has stopped updating (I’m as shocked as all of you…).

Gin (SJSU): Yurchenko full with a slight pike throughout and a step on the landing. Good start. 9.625

Nelson (UAA): Beautiful blind change to piked Jaeger. Rushed the final handstand and was a little hung-up on the pirouette, but beautiful stuck double tuck. 9.775

Andrada (SJSU): Good Yurchenko full. Not a ton of heigh, and landed with chest down. 9.575

Milne (SJSU): Missed the block on her Yurchenko full, landed almost on her knees (but somehow managed not to put her hands down). 9.000

Chan (SJSU): Powerful Yurchenko full with a ton of distance and a big step back. Great job. 9.750

Alonso (UAA): Muscles up the first handstand, but nice position. Great bail to handstand. Blind change to straddled Jaeger, caught a touch close. Another definitive stick on the double tuck. 9.850; pretty sure that’s a career high for her!

Solid vault for the Spartans, though well down from last week’s 48.800 (losing Phillips doesn’t help). All those bouncy landings took their toll, but nothing disastrous. Fabulous bars rotation from the Seawolves, just a tenth off the 49 mark. Love how well they’ve cleaned up the details this season. I need to double-check, but pretty sure there were at least two career highs in that rotation…

Kelperis (SJSU): Front full to front full with some form, but good. Round-off double tuck, great height. Love her music and choreo. Good position on tour jete half. One and a half to front lay a tad low and stutters out of it. Really nice start and fun routine. 9.725

Decious (UAA): Kicks out of that full turn. Front aerial with a leg up, split jump a bit short. Legs on bhs loso, but solid. Stream glitched and came back into focus just in time for me to see her stick the dismount. 9.425

Andrada ? (SJSU): Double pike with chest slightly down. She’s really into the choreography. Front lay to front full, lovely. Switch full to Popa to straddle half. Powerful Rudi to finish. 9.650

Brown (UAA): Bhs loso, rock solid. I like her dancing, hehe. Check after the full turn. Switch half to straddle half ? A little off on her side aerial tucked full, but a third stick. 9.625

Marquez (SJSU): Whip half to front full, well done. Popa to wolf full, gorgeous! Comes up short on the double tuck and takes a step forward. Good routine, though. 9.575

Hyderally (UAA): Gorgeous flexibility. Front aerial to back tuck, perfect. Split jump to ring with a check. Love the needle scale to traditional scale. Kicked out the full turn, then crowns herself, love it. Stuck gainer pike (looked like it was right down the middle). Gorgeous routine. 9.850

Mazury (SJSU): Big double tuck, slight shuffle back. Good amplitude on the leap series, back leg was maybe low on the Popa? Front lay to front full, well done. Ooh, getting cheeky with the choreo. Double pike to finish. 9.825

Alonso (UAA): Cat leap to ring, a big low on the front leg, but solid. Bhs loso bhs and she goes off the end, too bad. Moonwalking a little bit. Standing front full dismount with a crossover step. 9.050

Knapp (UAA exh): Ooh, a split… Like on the beam! Bhs pike and comes off. Wolf to sheep with a bobble, but bonus points for that being a hilarious combination. Beat to double stag with a leg up. Tick tock, love it. Piked gainer with a step. Hope she conquers the nerves, because I’d love to see this in competition. So many unique skills and choreo.

Orcutt ? (SJSU): Okay, girl can dance! Bounces out of a powerful double tuck. Straddle half to Popa. Missed the second pass, sorry! Gorgeous one and a half to front lay.

Another really nice rotation for both teams. The Spartans’ floor routines are so well-constructed and so much fun, just showing a touch of start-of-season rust. I’d be stunned if they don’t break 49 soon. Likewise, the Seawolves should be very pleased with that beam score, a huge improvement from opening week’s 47.350 and 46.900. The great news is that they didn’t just have to rely on Hyderally; there were really good scores (and really good routines) across the lineup.

Alaska is heading into a strong event and needs a 46.45 to beat their season debut. The Spartans need a 48, I think, to beat theirs. Both doable.

Gin (SJSU): Bhs loso with some knees, but very solid. Huge Straddle full, wow! Lovely side aerial. Round-off one and a half with a small hop. 9.700

Green (UAA): Love the Robot choreo, so fun. Huge double tuck to open. Wolf full, great. Popa and straddle half, I think? Fhs Rudi, great. One and a half to front pike, great. Controversial opinion? I like this better than Evans’s Mario routine… 9.675 feels a touch low in comparison to the last rotation.

Mazury (SJSU): Hitch kick to front aerial with a wave. Bhs loso, little hip check. Switch split to straddle quarter, lovely. Beat to straddle half with a leg up. Front full with a step. 9.725

Decious (UAA): Nice Rudi to open. Split full and a little low on the wolf full. Front lay to front full, well done. Under-rotated one and a half to front lay with some knees, but she saves it. 9.575

Andrada (SJSU): Bhs loso, lovely. Side aerial with a wave. Check after the full turn, but good cover. Pretty one and a half dismount with a crossover step. 9.725

Alonso (UAA): Lands her double pike a little crunched, but pulls it out. Absolutely love her performance. Such a great, fun routine. One and a half to front lay with some knees. Straddle half to Popa, good. 9.500

Adams (SJSU): Okay, her pigtails and awesome. Oh no, comes off on her front aerial. Split half is a little shy. Bhs loso, comes off again. Split to split full with a ridiculous save. She was NOT coming off! Gainer full with a step. 8.175

Hyderally (UAA): Fhs double full, slips and has to put a hand down. Much better one and a half. Switch ring to wolf full, well done. Again, this choreography is just unreal. Round-off loso, gorgeous. Fhs full lay, a slight skid out, but great cover. 9.150

Chan (SJSU):  Her gorgeous handstand in split. Way short on her leaps, big check. Another check on the side somi. Bhs loso with extra steps. Switch split to split quarter, very nice. Slightly over-rotates the full turn. Side aerial to full with a small hop back. 9.500

Fox (UAA): Fhs lay to Rudi, gorgeous. Switch split and Popa, maybe a touch under? Didn’t have a great view. Ouch, crunched double pike but doesn’t put her hands down.

Milne (SJSU): Side aerial to loso, lovely. Wolf jump to a short ring. Front aerial split to Korbut, excellent. Scorpion, cool! One and a half with a step forward. Great anchor routine. 9.850 and I’m pretty okay with that.

Brown (UAA): Good double tuck, step forward but not bad. Switch full to Popa, not quite at 180. Great one and a half to front full. I love that Alaska’s not afraid to get dark or weird with their choreo. Nice Rudi to close (especially after basically getting iced while waiting for Fox’s score). 9.750