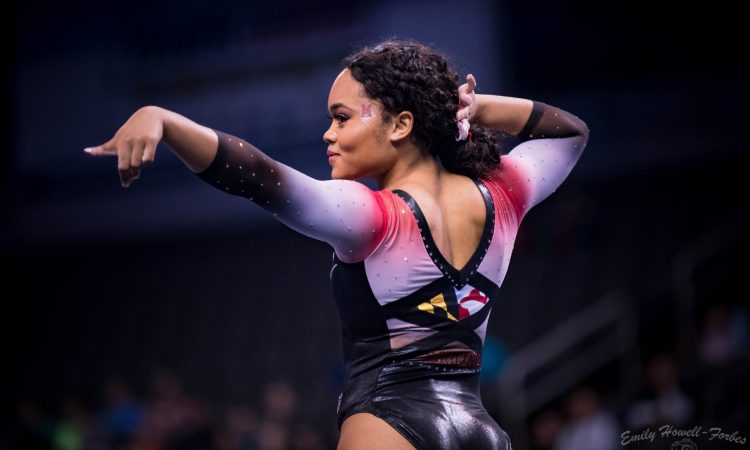 Usually there’s not a lot of pressure in these early week conference duals. The scores are so easy to drop once NQS kicks in, and honestly, no one will remember what happened in a month anyway. But Maryland has built itself some fairly serious stakes by virtue of its spectacular first-week performance. It’s one of only 14 teams in the country to beat 196, and based on video footage of its performance at Little Boston, that score was not misleading in any way. But the Terrapins have had plenty of instances of failing to live up to potential in the past, and if they want to prove they’ve moved on from those days, today is the first chance to do that.

Iowa had a great week two after its meltdown at the Critique Classic (and honestly, who didn’t melt down there?). There’s not a great deal of depth on bars, so it’s really important that the key contributors can be consistent. But the Hawkeyes are ranked 15th on floor, and sophomore Lauren Guerin has stepped up a level this year from “quietly excellent” to “an undeniable contender on the national level.”

WELL, friends, some things have happened since I wrote the introduction on Thursday. Most importantly, Iowa got stuck in an airport for almost forty eight hours waiting out a snowstorm. As a result, the meet was moved four hours later. If there are signs of fatigue or disorientation from anyone today, particularly the Hawkeyes, we won’t sweat it.

This meet is on BTN+/Flo, if you have either of those things, and scores are here. Remember that Maryland scores are inexplicably password-locked and you’ll need to type TERPS into the box to see them.

Tolan (Iowa): Blind to Jaeger to overshoot, touch of leg form. Blind full with a soft back to double back, low but stuck. 9.75

Silberman (UMD): Yurchenko full on, tuck off, clean with chest a touch low and a quick step forward. 9.675

Killian (Iowa): Jaeger a little messy, overshoot. FTDB dismount with a hop. Soft knees and feet and a lot of closed hips on that routine but getting through. 9.65

Glauber (UMD): Looked like closed shoulders on the table on a FTY, very quick with a hop to the side. 9.65

Farina (UMD): NICE FTY, maybe a touch of pike in the air but looked the cleanest so far. 9.75

Greenwald? (Iowa): We saw her coach put her back onto the bars so presumably she fell on her release. Toe on to pike, flaaaat and almost hits her feet, double lay all right with a step forward. 8.825

Kaji (Iowa): Blind to Jaeger, very tidy. Toe on to pike, a little arched, switch kip. She looks tiny from this low camera angle. Double lay with chest slightly down and a small hop. 9.85

Rouse (UMD): Exhibition, I guess. FTY, well off to one side on the table and goes way off on direction, very piked.

Definitely no scoring gifts today, though neither of those rotations were special either. That said, we had the most difficult vault angle in the world for telling how good a vault actually is. Maybe don’t stick a camera at the end of the landing mat and let us just guess?

Greenwald (Iowa): BIG FTY, big hop back. Amplitude in a different world to most of Maryland. 9.65

Silberman (UMD): Half turn to Gienger, nice bail. Archy on a handstand but not a major break, double lay stuck-ish. Nice one. 9.85

Agrapides (Iowa): Low onto the table, comes in short with a step forward. 9.55

Solomon (Iowa): Nice full, looked a little pikey with a small hop back. 9.75

Wright (UMD): Maloney looks great, Ray to overshoot. Wow! So clean. Stalder to double back huge and stuck. A beauty. 9.825 what

Steffensmeier (Iowa): We got to see her run down the runway and her teammates run to follow her! Cool, neat. 9.75

Barber (UMD): Clear hip to Hindorff to overshoot, touch of feet. Double lay open and stuck, even on an eight-incher, which is not easy. Nice work.

Okay, the live score is sending confusing messages, I don’t know what to believe.

Glauber in the exhibition. Archiest release on a Tkachev I’ve ever seen, gets through clean.

Tiara Wright was #robbed I’m sorry. She’s magnificent and never seems to get scores for it.

But can we say at this point that last week was definitely not a fluke for Maryland?

McClure (UMD): Front aerial BHS SMOOTH. No one’s taking the connection on that one. Switch straddle quarter lovely, full turn with a little wrist flick as she prepares to land it that I love, kick front to split, Rudi dismount off one leg with a hop. Amazing, so steady. 9.775 is rude.

Greenwald (Iowa): Full in, underrotated with a step forward. Switch side Popa Popa, all right, two and a half punch front chaotic with a few steps back. 9.625

Peterman (UMD): BHS LOSO great, beat side aerial tentative but stays on. Switch straddle quarter, unsure of the splits there, one and a half turn. One and a half dismount stuck-ish, reaches to hold it. 9.775

Gilchrist (Iowa): Front 2/1, a little deep and a big hop forward and to one side. One and a half front pike, switch half wolf full wolf full, Rudi great. 9.725

Farina (UMD): BHS LOSO, a touch of knees but aggressive. Full turn, switch straddle quarter, side aerial step front to beat jump. One and a half twist with a little hop back. 9.7

Agrapides (Iowa): Front through double pike, great. One and a half front pike, big step. She is deeply dramatic. Switch side Popa, double back landed a little awkwardly. 9.825

Rouse (UMD): Standing LOSO to straddle, BHS LOSO tentative but fine. Switch straddle quarter, one and a half dismount with a hop. 9.675

Castle (Iowa): Double pike great, wolf hop full to switch side wolf full. Rudi good. The Tequila routine <3 One and a half front lay, bigger step but stays in.

Guerin (Iowa): Full in is amazing, switch half Popa straddle. Front through double back, she’s getting the landings. 9.95, wouldn’t surprise me at all to see a 10 on that pretty soon.

Scoring is funky today, judges get really happy at strange moments. But the Guerin floor score is absolutely correct. Looks like Maryland won’t come in too far below last week’s 196. Making no bets on Iowa’s final score due to beam.

Someone yelled “IN-YOUR-FACE GYMNASTICS, PEOPLE!” audibly during touch warm up. Feel like it was Larissa Libby because that’s very much her vibe.

Gilchrist (Iowa): BHS pikeout, secure, switch half to beat. Hitch kick side aerial, full turn, side somi, gainer pike stuck. Not a majorly wow beam routine but not giving much away either. 9.775

Rubio (UMD): Double pike well done, switch side to Popa. One and a half front lay. Double back, rebound back but keeps it in bounds. 9.675

Vance (Iowa): BHS LOSO, aerial round off. Split straddle 3/4, full turn, side aerial back full laid out but with bent knees. 9.875

Rouse (UMD): Double pike, great, high energy, one and a half front lay and she lands grinning. Tour jete half Popa beautiful, double tuck a little deep but lunges out fine. 9.875

Barber (UMD): Full in messy legs but strong landing. One and a half front pike, switch to Popa tuck 3/2 jump, double pike good.  9.925

Emma Silberman just put up a 9.875 in the exhibition on floor.

WOW MARYLAND. An otherworldly vault rotation was key to the Terps cracking 196 last week, and I thought being average on that event today would cause trouble later on. Not so. A very similar score will keep them easily in the top fifteen nationally. This is really happening.

Iowa had a rock-solid day considering all the travel drama. There are some depth questions on this team but it’s doing great with what it has, the floor difficulty is unreal