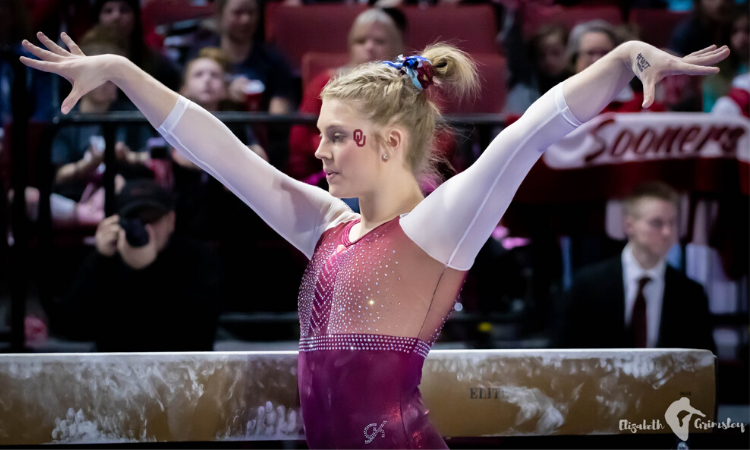 This weekend’s only top 10 matchup comes to us from Tuscaloosa, Alabama, and it’s a good one—a battle between the top-ranked Oklahoma Sooners and the ninth-ranked Alabama Crimson Tide. While in most sports a top 10 matchup means the outcome is in question, in this case it would be a huge surprise if Alabama were to upset Oklahoma. But that doesn’t mean it won’t be a good meet to watch!

Oklahoma comes into this meet in mid-season form: still with a few lineups to work out and a handful of sub-9.8 scores to bring up before the postseason, but otherwise is looking extremely dominant and focused. Precisely what we’ve come to expect from the Sooners. The biggest question mark is Olivia Trautman’s health, but we finally got a partial answer to that last week with the confirmation that she broken her heel. That certainly doesn’t sound promising for her return to lineups in the next few weeks, so in the meantime I expect Oklahoma will continue to rotate some new faces into the top six for experience.

Barring some disaster for the Sooners, Alabama should be the far more interesting team to watch in this matchup from the prospective of improvements over last week’s performance. For the first three rotations of the Auburn meet, Alabama looked fantastic, and the freshmen lived up to the hype. The final rotation saw the Crimson Tide counting a fall, but the meet as a whole still felt like a very positive opening to the season. One area of concern is potential injuries: Emily Gaskins did not compete at all last week, and Lexi Graber appeared to have possibly gotten hurt during her beam routine. I’ll be watching to see these two gymnasts’ contributions (or lack thereof) in particular tonight.

A heavyweight matchup like this is deservedly being aired on ESPN2; scores are here. The scores page already has lineups in it, so if they’re accurate, it looks like Lexi Graber is competing all around; great news for the Tide. Also, Trautman is in the bars lineup! And Gaskins is in the beam lineup! Good injury news all around! EDIT: Graber later disappeared from the beam and floor lineups.

OU will be debuting a new leo tonight. I’ll be one of the judges in our leotard rankings this week so I’ll save my thoughts for that post…

On the call tonight are Kathy Johnson-Clarke and Bart Conner. Anyone else looking forward to hearing Kathy gush about Luisa Blanco’s toepoint?

It’s 9:00 and ESPN2 is showing a basketball game, and my Roku says this meet hasn’t started yet. Welcome to being a college gymnastics fan. And it’s on ESPN News! Switched just in time.

Webb UB: Her Pak is gorgeous. Maybe a slightly short handstand afterwards. Van Leeuwen is great. Double front half is stuck, flexed feet in the air. 9.85

Blanco VT: Great distance on her Y-full, though not very high. Nearly stuck, a slight shuffle back. 9.85

Trautman UB: Season debut for her! Shaposh to Pak, some leg separation. A couple of her handstands may have been a little short but it was hard to tell. Stuck double layout. Nice! 9.9

Mahoney VT: Beautiful Y-full in the air, a little short on the landing and has to take a slight hop forward. 9.85

Burgess VT: Another beautiful Y-full, slight hop back on the landing with her feet apart. 9.85

Degouveia UB: Huge Jaeger. Pak is beautiful. Her FTDT was a bit messy in the air but stuck. 9.925

Graber VT: Y-1.5 is huge but she has a large step forward on the landing after overpowering it. 9.9 seems high for that huge step…

Smith UB: Ricna to Pak is gorgeous. DLO has some leg separation but stuck. Beautiful routine. 9.95 and I can’t complain about that score.

Olsen VT: Overpowers her double Yurchenko and has to take a large hop and a step back. 9.775

What a whirlwind of a first rotation. It was over in ten minutes flat! Can ESPN be in charge of timing at all meets, please? Both teams will be happy with that rotation with neither counting any scores below 9.8. It’s great to see Trautman competing and she looked like she was never out. That should be it for the night for her, though!

Weins VT: She twists late in her Y-full, takes a large step back. 9.75

Childers UB: Shaposh with some leg separation, bail to handstand is nice. Handstand on high bar looks short but hard to tell. Half in back out dismount, stuck with some form issues in the air. 9.85

Dickson UB: Bail is well controlled. This angle is SO bad for handstands, I keep thinking they’re short but Kathy keeps complimenting them so who knows. Huge Tkatchev, great FTDT dismount, stuck. 9.875

Graber UB: Nice Gienger, bail is well controlled. Her handstands look right on to me. FTDT with a small hop. 9.85

Givens UB: A little off on her blind change, Jaeger is nice. Almost goes over on a handstand on the low bar but saves it. DLO had some leg separation but she managed to stick it with some lean forward. 9.875

Well, Oklahoma is on track for a 198.4, though of course one of the rotations left is beam. But Bama will head to the beam first after a fantastic 49.425 bars rotation, so let’s see if they’re able to ride that momentum and get past the beam issues from last week. What a great meet for both teams so far!

Desch BB: Cat leap to front aerial to split jump, not sure that hit 180. BHS LOSO with a slight lean but not really a balance check. Full turn turns into a 1.5 turn as she was covering a balance check.  Leaps are good. Nice 1.5 dismount, leans forward but holds the stick. 9.8

Draper FX: Double pike to open, well controlled. Front full to front full is good. Great positions in her leaps! Layout half to 1.5 to close is nice. 9.875

Klopfer BB: Opens with a wolf turn and Kathy says “it’s not the most elegant position obviously.” Front layout BHS is nice. Cat leap into side aerial. RO 1.5 dismount is overpowered with a large step forward. 9.875

Smith FX: Double tuck, very nice. Back 1.5 to front layout that turned into a tuck and she loses her footing and falls. Probably a timing issue. Closes with a double pike that might have been a bit low but she sticks it. 8.9

Burgess BB: One-handed BHS LOSO is great! I also loved her full turn at the beginning of her routine. Straddle 1/4 is nice, as is her split leap. Side aerial to back full is great. Redemption from last week! 9.85

Lapinta FX: Opens with a triple twist, lots of leg crossing going on and it looked a little underrotated to me. Front full to front layout is nice. Double tuck to close but she has a little too much power and has a large hop back. 9.9 feels high to me

Doggette BB: Slight lean on her full turn. BHS LOSO is right on. Leaps are great. Side aerial to back full is great, some slight foot movement after landing. Kathy is very happy and I can’t say I disagree. 9.9

Blanco BB: Kathy calls her a “breath of fresh air” (same, girl). Slight bobble after her front aerial. BHS LOSO is beautiful. L-turn is gorgeous. Leaps are nice, not sure if the split half was at 180. RO double twist dismount is stuck. Kathy calls her truly special! 9.925

Webb FX: Front double full to open. Back 1.5 to front full second pass is great. Leaps are a little short. Closes with a Rudi. 9.925

Gaskins BB: Side aerial to beat jump is pretty. Slight balance check on full turn is covered well. A little short on the side split half. BHS LOSO with some form issues. Split leaps look good to me but Kathy says one was short. Gainer full dismount is stuck. 9.85

Nichols FX: Back 1.5 through to double back to open, her usual perfection. Back 1.5 front layout stepout, she took some steps out of it but I don’t know if that counts as a deduction since it seemed more like dance. Closes with a double pike, well controlled. 9.975

We’re on track for a 198.325-197.425 score here. Smith’s fall wasn’t ideal but it’s early in the season and the score was able to be dropped. Alabama, meanwhile, is putting together quite a meet with only floor to go after putting together an amazing beam rotation with no scores under 9.8!

I enjoy Bart’s commentary, and I’m sure he’s been instructed to say this by his producers, but seriously, I’m sick of hearing about “season high” scores during the team’s second meet of the season.

Thomas BB: Side somi with a slight balance check. BHS LOSO is solid. Split leap split leap straddle 1/4 all look good to me though Kathy says one was short. Side aerial to back full with a small step back. Good leadoff. 9.875

Mahoney FX: Overrotates her double tuck and takes a large, uncontrolled step back. Front full to front layout with a bit of an uncontrolled step out of it. Closes with double pike, a bit short on the landing. 9.825

Dunn BB: She trained at Bart Conner’s gym so he’s unsurprisingly excited about watching her. Her beam music is Someone Like You, for those of you who care about that sort of thing. Yay for a song I recognize! BHS BHS LOSO is right on. Split leap straddle half is good. Front full dismount with a step forward. Kathy tells her to put her crown on. 9.875

Olsen FX: They’re switching up the order here, this was supposed to be Klopfer. Double double landing was maybe a little low but it’s a double double so it’s still amazing. Good leaps. Front tuck through to a double tuck, a couple small hops back. 9.825

Webb BB: She’s so dedicated to every movement! Even her full turn is gorgeous. BHS LOSO. Front aerial to split jump with a slight hesitation in between. Leaps are pretty. Side aerial to back full is perfect and stuck. 9.95 and a 39.625 AA score for her

Desch FX: Double pike, slides back a bit on the landing. Back 1.5 to barani to split jump to punch front, all great. Double tuck to finish, stuck. 9.9

Smith BB: BHS LOSO with a large balance check. Front aerial to straddle jump is perfection. Beat jump to straddle half with a large wobble, has to break the connection to the BHS swingdown. Sticks her dismount but it felt like she was rushing through the routine after that first mistake and that caused a few other bobbles. She doesn’t look happy with it. 9.725 which puts OU over 198.

Doggette FX: Piked full-in to start is fantastic. Her split positions in the air are a little short. Front tuck through to double tuck is perfect. Great routine and I’m so excited to watch her career unfold. 9.925!

Nichols BB: Front aerial BHS LOSO with a slight balance check. Another slight check on the full turn but masks it well. Switch leap to split leap are both great. RO 1.5 dismount is stuck. 9.9

Klopfer FX: Double tuck to open, very high! Back 1.5 to front layout was a little low but a nice landing. Double pike to close, chest is down on the landing but she sticks it nonetheless. 9.825

We officially have our first 198+ score of the season, and nobody will be surprised it’s from the Sooners. But the real story here is Alabama, who turned around last week’s beam disappointment and increased their score across all four events to become just the 5th team to break 197 so far this season, even before powerhouses UCLA and LSU. It’s also their highest score since March 2, 2018 and the highest non-Oklahoma score so far this season. What a fantastic meet from both teams!