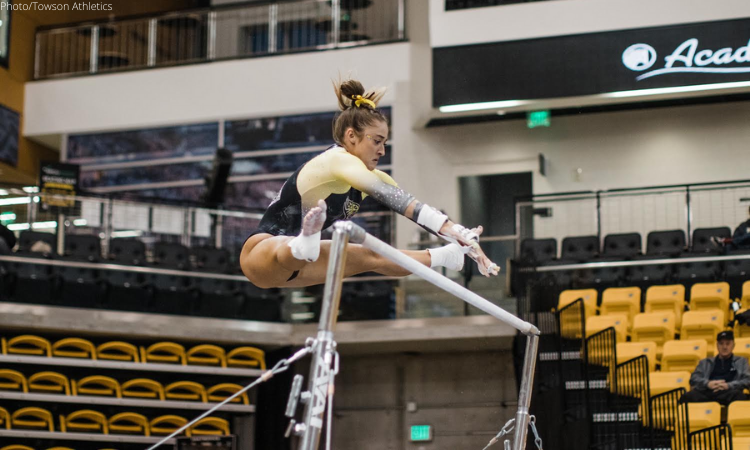 When Towson took the floor at the Palestra on Sunday, sophomore Tirzah Delph wasn’t in any of the starting lineups. But just as it was at her previous school, UIC, her role remained important regardless of her ability to contribute.

Last year, Delph did not compete a counting routine for the Flames, but it was her relationship with her teammates that made her fall in love with the program there. It was also what she saw as the biggest similarity between UIC and Towson when she made the decision to transfer after the UIC program was cut. Particularly, it was the strength of the teammate bond in spite of adversity. As she visited schools, Delph sought a team experience as close as the one she had previously, where the team bonded over the shared knowledge that it was the team’s last season.

Despite Towson coming off a low-ranking season, “I could tell [2020] was going to be different,” she said. “They haven’t done the best for the past few seasons, but they were really excited for 2020, and I knew they were in it together.”

Now that she’s here, Delph seeks to be supportive of her teammates. “We have a young team, so I try to be there for them and remind them they’re not alone. Freshman year can be difficult, but I want everyone to know they have something to contribute.”

Head coach Jay Ramirez observed that “she comes from a big family, so the sharing and caring attitude she’s gotten from that really helps with the team atmosphere.”

Ramirez also noted that Delph has a positive connection with the coaching staff as well. “Her communication style is very open,” he said. “She tells us what has and hasn’t worked with previous coaches, but she’s willing and open to try things if we want her too.”

Delph has been out with a lower body injury, but she’s expected to return on bars soon and floor a little after that. Her team is coming off a first meet of the season that saw a fall counted on beam and some other early season mistakes. But she’s not deterred and is ready to contribute when she can.

“Even if we fail, we keep moving forward,” she said. “We won’t let ourselves fall behind.”