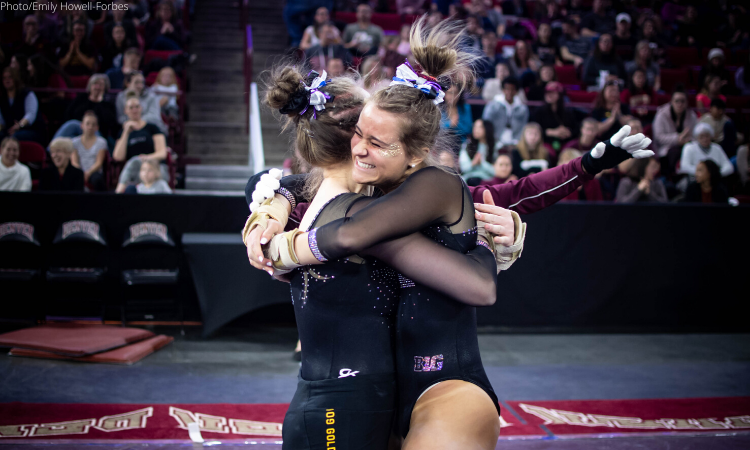 Despite falling to Dever 196.750 to 196.475 in its home opener, Minnesota head coach was still proud of her team’s performance. “Denver is a great team, and for us to have this type of performance in their arena during the first meet of the season is very exciting,” she said.

But beyond the scores, there was a special return in the making, a homecoming of sorts.

Competing gymnastics again has been a long time coming for Maddie Quarles. The Denver transfer competed for the first time since 2018 on Sunday at none other than the school she transferred from.

It was a long comeback trail, from injury to ultimately transferring back home. The Minnesota native frequently flew back to visit last year, so it’s no surprise that she ended up with the Golden Gophers. When asked about deciding between schools in the transfer process, joining the Gophers was an easy choice.

“I’m from Minnesota, so that was a big factor,” Quarles said. “I knew the coaches from before, so that was one of the main reasons.”

Plus, her strong support system made the transition even easier. “With having my family closer, it’s been really amazing, and all my teammates have been really supportive,” Quarles said. “I’m finally doing gymnastics, so it’s helped a lot.”

Quarles’ debut was incredibly strong; she scored a 9.900 on vault with her Yurchenko one and a half. That mark tied her for the vault title in her return to competition. “Finally getting back out there on the floor and showing everyone what I can do was [really amazing],” she said.

“Having all my friends here at Denver come and watch, because they didn’t get to watch me last season,” was one of the best parts for Quarles. And while there are many more vaults in her future for Minnesota, for now she’s just glad to be competing again.