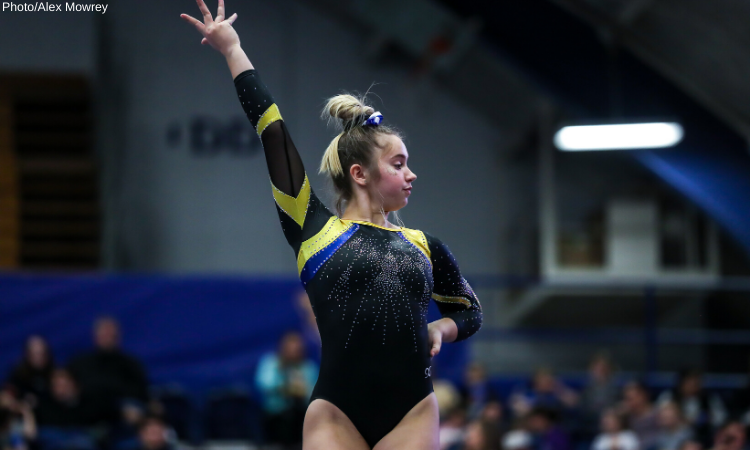 Over the past several seasons, there’s been an increase in the number of gymnasts who graduate high school early to join a college team. In 2020 alone, 17 gymnasts enrolled in January. Pittsburgh’s Emily Liszewski is one of them. She arrived in Pittsburgh from her hometown of La Verne, California, just after Christmas, and less than three weeks later competed in her first college meet on vault and in exhibition on beam.

The transition to college gymnastics isn’t easy, and it’s especially difficult coming in so close to season, but head coach Samantha Snider said Liszewski has handled it well.

“She has done an absolutely amazing job of handling everything with grace and maturity,” Snider said. “I’m really proud of her for being able to come in and handle that transition as well as she has.”

Liszewski said the transition has been very quick and hectic, but she’s had a lot of support to help her through it.

The atmosphere at a college gymnastics meet is completely different than that of a club competition, but Liszewski said she enjoyed her first taste of it.

“It was completely different from what I’m used to,” she said. “I stepped out of my comfort zone. But overall, I loved it. It was really fun. The energy in the crowd was amazing.”

Liszewski’s 9.625 was the fourth-highest on the team and contributed to an event total of 48.425 for the Panthers, a good start for the newcomer who has had minimal practice time with the team. Snider said she expects to see Liszewski in multiple lineups as the season progresses.

“She made out vault lineup right away, and she’ll continue to thrive there,” Snider said. “We wanted her to get some competition experience with beam, and I think she did a great job. She did have a mistake, but I think that she definitely will be vying for a spot in that lineup. She’s also training floor.”

If her debut is any indication, Liszewski is going to be one to watch this season.