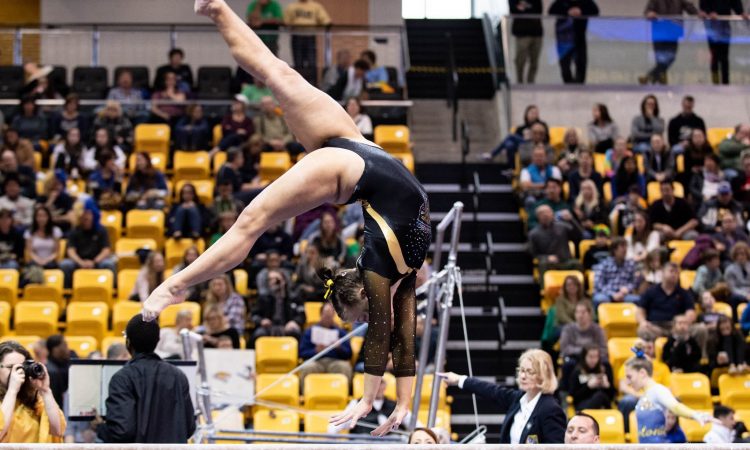 I’m back in West Philadelphia at the Palestra, where the EAGL will meet the ECAC in this season-opening meet for Towson and Penn.

In this, its first meet under new head coach Jay Ramirez, Towson will look to bounce back from its tough 2019 season. The Tigers are bringing in a big freshman class and an exciting transfer in former UIC gymnast Tirzah Delph, each of whom will need to bring plenty of depth to capitalize on those 2019 losses.

Penn has a sizable new class of its own, adding to an already big roster. As the Quakers begin the long road to USAG nationals (which they didn’t attend last year), they’ll need to figure out where those freshmen best fit into the lineups, given there aren’t too many spots to fill. Expect key vault and floor contributions from local product Rose DeBarberie to lead the way. 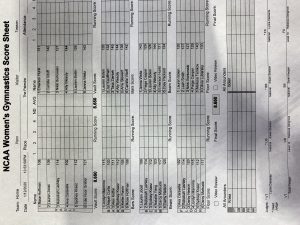 The only music that’s played in the arena thus far is Taylor Swift. Let’s see how long this goes.

Well, update on my prior prognosis re: DeBarberie…she’s in a boot and appears to be doing no events today.

Bolen (Towson): First handstand short. Tkatchev low but gets it around. Lovely full pirouette to end and a great stuck dismount. 9.525.

Kauffman (Towson): Really good handstands. Nice bail position. Double back dismount has some great distance but too much power and she stumbles forward. 9.275. That seems…low? Don’t think I missed a fall…

Caravela (Penn): Another yfull, not quite the distance but a better landing this time. 9.700.

Wesoly (Towson): BIG Jaeger to bail, what a combo. Short on the last handstand but the full pirouette is fab. Double back is almostttt a stick, I think she’ll fool the judges with that one. 9.750.

Vitoff (Towson): Gienger is a bit chaotic but hits it into the bail. Full-in to dismount this time! Cheers like it’s a stick but I think there was a step. Nice overall. 9.625.

The score for Towson’s Tess Zientek was just raised from a 9.675 to a 9.775. Towson will now go ahead of Penn. Still looking for details as to why Kauffman’s was so low, but otherwise nice bars for Towson. Penn will want to up the difficulty on vault as the season goes on; some of those layouts are upgradable.

Curtis (Penn): Gienger has great air. Slightly short on the handstands and very short on the last one, looks like it ruined her groove and she has to hop off the high bar. :/ Gets back for a good double back and a small step. 8.700.

Kraez (Penn): Beautiful form on the Jaeger. Short on the last handstand, double back small hop. Another aggressive routine. 9.475.

Flavin (Penn): Really big Jaeger to bail, the team loves that one. Big double back, goes far but has to take a few steps forward. 9.600.

Looks like Towson will just be doing those five vaults.

Hoffman (Penn): Good height on the Tkatchev. Double back is a bit short and has to take a step back. 9.600.

Instead of Kothe going on bars for Penn, Libby Garfoot will be anchoring.

Garfoot (Penn): Gienger has great height. As she’s winding up for the dismount she slips off…looked like a pretty hard fall. Takes a moment to get up but she does and walks off. 8.150.

Tough that Penn has to count a fall, but I was really impressed with the rest of the rotation. A lot of confidence and aggression. Also loved watching Towson, who clearly didn’t come to play.

Just now noticing these tweets from Penn. Whoever’s in charge of GIF selection is on point.

Bolen (Towson): Double tuck, confident on the landing. Switch ring to switch full. There are approx. fifty different songs being used in this routine. Front lay to front full, almost a stick. Front full to front 1.5 a little short. 9.575.

Lashley (Penn): Switch leap to tuck jump half, probably won’t get connection for that. Side aerial with slight hesitation. Good back full dismount. 9.625.

Kraez (Penn): Switch half to beat jump. Hesitates on the tuck jump half but overall really nice flexibility with her leaps. Missed series but looks like a great landing. Tuck front full to dismount, a little short but stays on her feet. 9.675.

Borkowski (Towson): Double tuck, controlled stumble back. Beautiful leaps. Front lay to front full, stumbles again but controls it. Double pike with her chest down but her feet stay in place. Fun routine. 9.625.

Yang (Penn): Gorgeous BHS LOSO. Ring jump! Such a pretty beam worker. Side aerial to back full is stuck, should be a great score. 9.825. First 9.8+ score thus far.

Casper (Towson): Double pike, very controlled landing. Front lay to front full with a lunge. Double tuck with the chest a little low, but I’m impressed w the height of all these passes. 9.725.

Matsuda (Penn): Back tuck, well okay! No hesitation at all. Not the same for the series, comes off on the LOSO. Dismount makes up for it with just a step. 9.175.

Lubarsky (Towson): Front double full! Steps out of it a little but great landing. Also has some nice ponytail-ography a lá Abby Armbrecht. Front full, awesome. Front 1.5 and stumbles on this landing. 9.450.

Penn had a case of the Sunday scaries on beam, counting two falls and posting another in the exhibition spot. Towson is looking to run away with this one in spite of some yikes landings on floor; they seem really confident overall.

Taking their sweet time to start this one.

Weitz (Towson): Front aerial to beat jump, confident, as is the BHS LOSO series. Back 1.5 dismount with a small step. Nice leadoff. 9.450.

Caravela (Penn): They pumped the volume wayyyy high for this floor group. Double pike, great. Super high back 1.5 to front tuck, but sits it down. Double tuck with chest down. 8.950.

Casper (Towson): Straddle half, perfect. BHS LOSO with some legs in the air but no hesitation on the landing. Another pretty leap series. BHS to back full to dismount, small step. 9.650.

Wesoly (Towson): Switch leap to straddle half, a little hesitation. Oh no, seemed like her side aerial was strong but second guesses herself and falls. Quick remount and sticks the back full dismount. Great up until that point. 9.125.

Kraez (Penn): Her team is so hype. Open double pike, then a front lay to front full. I keep using the word “confident” but like…she’s REALLY in her zone. Sky high double tuck, legs slightly cowboyed but awesome landing. Please go rewatch this one. 9.800. Second 9.8+ of the day.

Packard (Towson): Triple series but comes off. Love that she went for it, though. Switch leap to back tuck, got nervous for a second but stayed on. Back 1.5 with a step forward dismount. 8.825.

Karpousis (Penn) exhibition. Front tuck through to double tuck, well…okay!! Wake Me Up Aloe Blacc music in the second half. Go off. Double pike, good two pass routine. I’d like to see it make the final six. 9.475.

Graber (Penn) another exhibition. A very dance element-heavy first half. Front 1.5. Back 1.5 to front lay at the end. Possibly the latest I’ve seen the tumbling passes in a routine but a fun one nonetheless.

Both teams had to count falls today, but their demeanors overall suggest great things to come. I’m especially looking forward to the future of Penn’s floor and Towson’s beam.