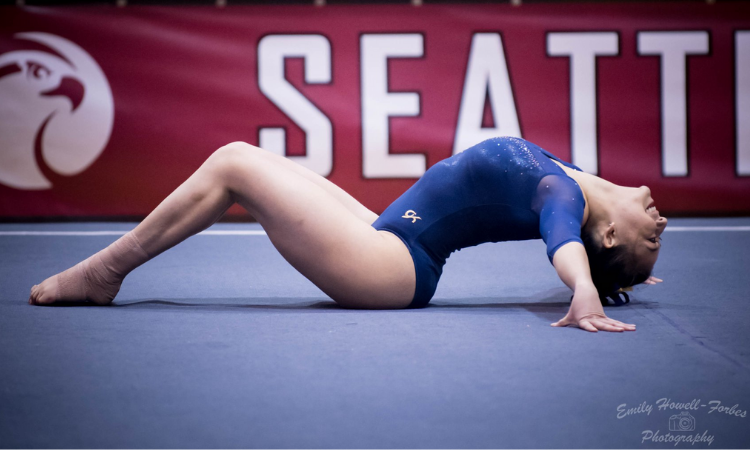 OK folks, this is going to be a fun one! The NorCal Classic features a blend of Pac-12 and MPSF teams in a competition that, to quote our very own Rebecca Scalley, “is reliably 60 percent chaos and 40 percent spectacular.” This year’s meet should be no exception.

P.S. If somehow you aren’t yet on the MPSF train, you will be by the end of this meet.

The meet will be Saturday, January 4 at 5 p.m. ET at Missouri’s Hearnes Center. It’ll be streamed live with updated scores available here.

Woohoo, the stream is working and is actually decent quality. Always a good start!

I’m thoroughly annoyed that there aren’t more people in the crowd… These are awesome teams who deserve to have a full arena.

Apologies in advance for being scant on details. This is a Facebook feed, so the camera’s jumping around and a little blurry (which makes IDing athletes a little tough). I’ll be as accurate as I can… Also, the live stats aren’t working, so that isn’t helping.

Clagg (Davis): The freshman sat out last week, so glad to see her. Yurchenko lay with a hop back. Not a ton of height, but good distance.

(Cal): Big double pike with a not-so-controlled lunge back. Really nice amplitude on her Popa. One and a half to ful, well done. Very cool choreo.

(Davis): Another Yurchenko lay, really close to the table.

Ito (Davis): Yurchenko full with a pretty big pike down and a small hop.

Brent (Sac State): Big pause before acro series. Good job on her bhs loso, tiniest check. Split jump to back tuck, another small check. Side aerial to switch split, arms swim a little. She’s being really deliberate with all her choreo. Piked gainer with a hop back. Brent’s a grinder, never loses her cool.

Clausi? (Cal): FTDT to open, tons of height. Couldn’t see the leaps, camera went out of focus, lol. Fhs to Rudi, very smooth and controlled. One and a half to front lay, a touch of form but not bad at all.

(Sac State): Front aerial, beautiful! Really slow bhs loso, and she comes off. Beat to a shy switch split, leg up check. Split to gainer full with a step.

Koeth (Sac State): Really unique back walkover mount. Bhs loso bhs, gorgeous. A bit shy on her ring leap and a small check. Small check out of her front aerial that she covered masterfully. Scorpion, love it. Bhs to gainer full with a college stick. Great routine for the Hornets, and the fans appreciate it:

Sorry folks, we still don’t have scores. I got what I could from the big screen in the background, lol. From what I saw, Davis had a decent vault rotation, though they’re still holding back on the difficulty. Sac State definitely had to count at least one fall on beam, but their new leo is fabulous; call it a wash? Apparently, Cal struggled on floor… A lot. That’s at least a point lower than last week’s score. Stanford’s bars score is a touch below their 49.075 from last week, but not a disaster.

(SJSU): Sorry, my feed cut out. A little crooked on the pirouette to double tuck and had to take a hop.

Chan (SJSU): Barely gets the Markelov over, but she made it! A little form on her final pirouette to double tuck, but not bad.

We’re literally just watching the empty floor right now. I hear some cheers in the background, though.

Phillips (SJSU): Nice pirouette to gainer with some legs. Rushed through the bail. Slightly short on last handstand, but a nice double lay dismount with a step.

(Stanford): Pike to split, big check. Round off one and a half with a big hop forward.

(Stanford): Big pause to standing Arabian with a slight leg up check. Cat leap to switch half, good. Bobbles out of her full turn. Bhs loso, solid. Piked gainer with a big step forward.

(SJSU): Really short first handstand. Markelov is out of control and she comes off. A little short on bail handstand. Piked double lay with a step forward.

(Stanford): Bhs bhs loso, hip check at the end but lovely in motion. Switch split to a shy split jump to good straddle quarter. Round-off to a floaty one and a half, hop forward.

Belkoff? (Sac State): Nice double pike to open. Popa to wolf, a little shy, but good power. Fantastic front full to front lay. Ugh, why are they cutting away to the beam? This is going so well! Stanford’s beamer is dancing along.

(Sac State): I think a front double (the feed is completely out of focus). Rudi to back tuck, really cool. Whip (?) to double full, I think.

(Sac State): Front double full to front lay with some legs. L full, a little ragged. I fully approve of Childish Gambino as floor music. Double tuck to her knees, has to put her hands down. Really nice split leap to finish.

I’m really mad about the feed and scoring situation, because there are so many fabulous routines we’re missing. These teams deserve better.

Sac State struggled on floor, having to count multiple falls. San Jose State had a decent bars rotation, with freshman Emma Milne notching a 9.800 in her college debut. Stanford will be pleased about no falls on beam, but they got mired in the 9.7s. Cal rebounded nicely from their disastrous floor rotation with a 49.025, including a 9.950 for Clausi! If only we’d been able to watch it…

(Davis): Short first handstand. Pirouette to Geinger, and she comes off. Excellent pirouette to high double tuck with an emphatic stick.

(Stanford): One and a half through to double tuck. Chest a little low, but really nice pass.

Gin? (SJSU): Lovely round-off one and a half with a step.

(Davis): Beautiful first handstand. Clear hip, good. Comes off on her Tkatchev, too bad. Some legs on the bail. Another gorgeous handstand. Pretty double pike with a step back.

Chan (SJSU): Side somi, fine for a side somi. Lovely bhs loso. Switch split to split, flawless. Panned away before the dismount, but her team was thrilled.

FYI, I’m literally getting nauseous from the camera moving around so much and going in and out of focus. The things I do for my fellow gym nerds 😉

(SJSU): Pretty gainer full dismount with what looked like a nervous step vs a necessary one.

(Stanford): Front lay to Rudi, I think? Powerful double tuck, hops back out of it a little.

They’ve totally given up trying to update the scores… Sac had a 47.950 on vault, which is an improvement from last week. 48.450 for SJSU on beam, not too shabby! 48.525 for Stanford on floor, about the same as last week. Davis 47.775 on bars for Davis (including counting a fall). Still no Hebert in their lineup.

(SJSU): Front full to front lay, not a ton of amplitude.

Motion to have Firework banned from all gymnastics competition.

Hebert (Davis): Bhs loso with some form, but steady. Cat leap to Barani, leg up check but stays on. Really low split jump and split full. Cartwheel gainer full with a step.

Phillips? (SJSU): Love how well she’s selling the dance. One and a half to front lay, fabulous.

(Davis): Bhs bhs loso, leg up but really pretty. Great extension on split, a little off on straddle quarter. Nearly stuck one and a half dismount.

(Davis): Good bhs loso. Cat leap to side aerial, nicely done. Split to double stag, positions not there. Slightly off on gainer full, but overall a good routine.

Really nice beam rotation for the Aggies! Cal continues to fight its way back with a solid 49.150 on bars. San Jose is off to a good season debut on floor with a 48.500. Stanford is done for the day, setting the number to beat at 194.700; they won’t be thrilled with that score, but this is a fairly tight-scoring meet.

Sklow (Davis): Nice double pike to open. Good amplitude on switch split to cat leap. Rudi to front lay, a little stutter on the landing. Such fun choreo and music! One and a half to pike to finish.

Cunningham (Davis): We’re completely out of focus again. Randi, very nice. Beautiful two and a half. Excellent amplitude on Popa series. Front lay to front full, excellent. Seriously, Davis has some of the best floor routines in the country right now.

Clagg? (Davis): HUGE Double pike to open. Tour jete half to Popa, well done. Front lay to Rudi, great. One and a half to front lay, great. Really nice routine!

Liddle? (Davis): Oof, lands short on her two and a half. Double tuck with chest low. Couldn’t tell what the leap series was. Front lay to front full slightly low, but best pass.

(Cal): Showing off her flexibility. Beat to double stag, doesn’t quite hit the shape. Front aerial to bhs, good.

Engstrom? (Davis): Great double tuck. Gets a little lost on her Rudi to front pike, skids out of it. Good straddle position.

Cal and Stanford will probably be looking to drop these scores, but showcased a lot of skill and fight that bode well for their respective teams. SJSU should be thrilled with their season debut, going 48+ on all events and beating in-conference rivals Davis and Sac State. Davis did well to improve from last week’s score by nearly two points. Sac State struggled across the board, though Jordyn Brent once again quietly pulled off a very solid performance.

My apologies for any misidentifications or misinformation! Here’s hoping next year’s meet is a little more accessible.