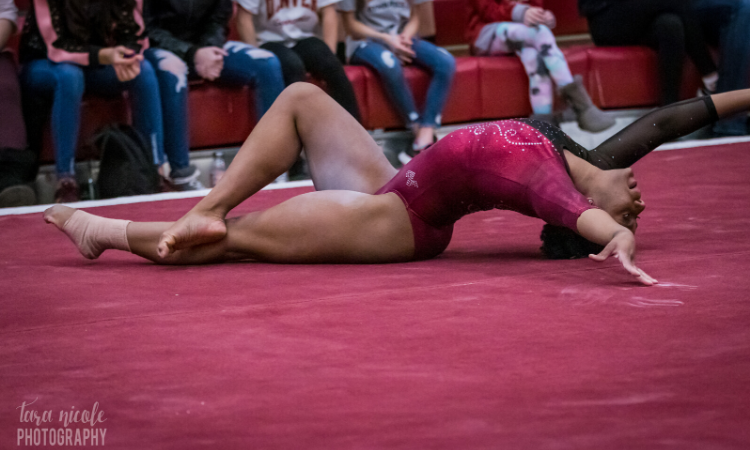 Hello from Magness Arena, where Denver hosts Minnesota in its home opener! Both teams are coming off excellent 2019 seasons and are expected to keep it up in 2020. It should be an exciting one, and I’ll be here blogging it all!

Denver put up its highest first meet score in program history last week at the Collegiate Challenge. Bars and beam led the way as we are accustomed to from the Pioneers, and the meet was capped with Alexis Vasquez’s 10 on beam. The Pioneers look to build on that performance today in front of a home crowd. Maddie Karr was notably back in the all around last week despite some concerns that she may miss the beginning of the season after a minor knee procedure. I’ll be watching the floor lineup closely; it’s an event where there’s depth to play with to find the optimal top six. Vault could be another area of interest since Denver opted to put five up last week and scratch Alexandria Ruiz in the sixth spot.

Minnesota didn’t have an official meet last week, but we did get a glimpse of the team at its intrasquad. One of the biggest storylines here is Maddie Quarles’ likely return to competition for the first time since 2018—and no less at the school she transferred from. We’re expecting to see her vault today. Halle Remlinger also showed four events at the intrasquad, but it’s likely that she’ll only make lineups on vault and floor. And it wouldn’t be Minnesota without the mention of Lexy Ramler. We get to see her and Vasquez on beam, which is a gym fan’s dream and should be quite the showdown, as will the all around title be between her, Karr and Lynnzee Brown. Beyond the normal stuff, this meet will give us a better idea of Ona Loper’s status after being pulled from the intrasquad for precautionary reasons after a fall on vault.

Injury Update: Don’t expect to see much of Minnesota’s freshmen, aside from Remlinger. Maya Albertin is being rested a lot, Mallory LaNeave broke her toe the first week of practice and is about 6 to 8 weeks behind everyone else in training and Kate Grotenhuis is out for the season after major back surgery.

If you’re so inclined, you can follow along with scores here and there is a paid stream here.

Let's get this thing started!

Here are your #Gophers who will be competing on the uneven bars! pic.twitter.com/lKOuYhricP

Bear with me; the beam is blocking my view of vault among other things.

Subject VT: clean yfull, good sized hop back, but she definitely has the dynamics. 9.75

Loper UB: nice first hs, Maloney to pak GORG. next hs a lil short, blind full to double back stuck. The best one so far. 9.8

L Brown VT: y1.5, good. looked like she maybe bent her knees going into the landing a little. but again, not the best view here. 9.85

Both teams got off to a pretty good start. Both are relatively strong on bars/beam, so it’s not surprising to see Minnesota ahead at this point. That bar lineup is great, and it should only get better as the season goes on. Denver did put up 6 on vault today, which is a step up, and over 49 is certainly a good total for this vault squad at this time of the season. This is going to be a good one, folks!

small note: my computer keeps trying to correct tkatchev to thatcher. So if you see thatcher, you know what I mean.

Williams VT: best yfull of the bunch so far, IMO, just a hop back but very dynamic. 9.75

Ramler VT: y1.5, looks like maybe stuck? It would be helpful if I could see better…great vault nonetheless 9.9

Glynn UB: she was struggling some in warmups; let’s see if she can hit here. good first hs, clear hip geinger, saved that hs before the clear hip geinger, good bail, slightly short final hs, ftdt, small step back. Great for her! 9.85

Morton (exh) UB: clear hip tkatchev good, nice next hs to bail hs, slightly short hs and loose, dlo, some piking and a small hop. She missed that a couple times in warmups, nice to see her land it.

Denver brought the fight on bars! Those first few landings will come, but a great rotation overall. I was also impressed with Minnesota’s vaults! They so often get overshadowed by the amazing bars and beam.

Lockhart BB: that sassy head roll in her mount sequence! love it! small hip check on front aerial, split jump good; bhs lost, foot up a little on landing; beat to straddle 3/4, good; bhs gainer full, stuck. A little tentative at times, but she’ll be good for the Pios. 9.625

Remlinger FX: double pike to open, I believe she has an E pass (full in I believe) but chose to play it safe now. her leap pass was good. back 1.5 to front lay, good; loving this little choreo bit; double tuck to close, a little short but she didn’t show it much. 9.75

Sundstrom BB: secure turn to start; bhs loso, bend at hips but stayed on; better side aerial; switch split half beat jump good; stuck gainer pike. Shame about the check in the middle. 9.7

Loper FX: front full rudi, good; switch ring to jump I missed thinking about the ring; not as good as Ramler’s ring but not bad; nice middle pass; y turn, fun! I could use a little more performance of this choreo. 1.5 to lay, stumbles a tad. 9.8

Absolutely beautiful work once again for Alexis Vasquez for a near-perfect 9.975 on beam! #PioneerTogether #GoPios pic.twitter.com/MSKw5ggWFv

Denver had a solid beam rotation, not without its struggles though. 9.7 for Sundstrom feels high to me considering her hip check, but none of the rest feel that bad to me. A Minnesota coach was complaining about tight scoring all around for them, which comparatively to beam sure but also lots of little early season mistakes on floor.

Karr FX: fhs double full, good; don’t remember that being a thing for her before! leaps looked good? Melissa KR is in my way. now lol. ro 1.5 to front full, good! That’s a new composition for her, and I kind of like it! 9.875

Despite being sick all week, Amoree Lockhart hits that floor routine and sells every second of choreography. Score: 9.800 #PioneerTogether #GoPios

L Brown FX: opening DLO, almost too much power! will never not love her jump into a drop; back 1.5 to lay to stag, good; great double pike to close. Nice routine; would have liked a bit more control on the first pass (she took a tiny extra step). 9.925

Minnesota looked great on beam! Denver had some good moments on floor but also a lot to improve upon as the season progresses. This really was an exciting meet and both teams have a lot to be happy about moving forward!