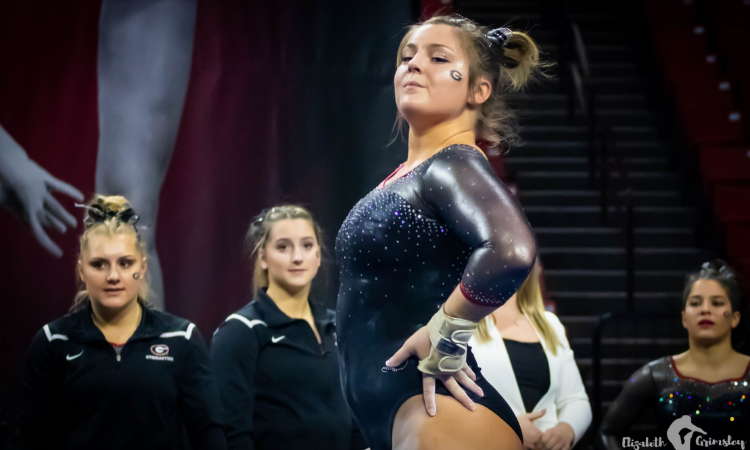 In her freshman season, Georgia’s Rachael Lukacs established herself as one of the most dynamic vaulters and floor workers on the team and in the NCAA. She also stepped into the bars lineup for the latter half of the season, performing reliably and admirably in place of an injured Emily Schild.

Already in 2020, Lukacs has yet again been called to step into the role vacated by an injured teammate. Senior all arounder Rachel Dickson suffered a season-ending Achilles and ankle injury just prior to the Gymdogs’ opening meet, leaving Lukacs as the team’s sole all arounder on the day. She won the title, as well as vault, en route to a Georgia victory over Oregon State, Iowa and Bridgeport.

On Friday night, in Georgia’s home opener against SEC rival LSU, Lukacs again performed admirably, tying for a share of the floor title and earning second in the all around and on vault.

She was particularly proud of the 9.825 she earned on beam. “It was amazing!” Lukacs said. “I’ve been struggling a little bit with [beam], but being able to nail that was just amazing. I knew it helped out the team. I’m just grateful to be able to have that opportunity.”

Lukacs was a top all arounder in her J.O. career (including winning the national title in 2016) and is looking to repeat that success in college. “I’m focusing on staying calm and trusting in my training,” she said. “I’ve put in the work, and [I know] that my team needs me. I need to be there on my A game. Just being able to grow at each meet is really helpful.”

Though the Gymdogs ultimately finished 196.100 to the Tigers’ 196.725, Lukacs was quick to praise her team’s ability to bounce back after a disappointing bars rotation. “We knew we had to keep going with it; we had to keep fighting through to the end and get those little details we wanted to fix.”

Senior standout Sabrina Vega credits Lukacs with helping her to rally and refocus after falling on bars. “Rachael kept saying, ‘Let’s go, the meet’s not over!’” Vega said. “It was good to have those 9.9s on beam and floor, but it was even better how the team stood up and had my back [after bars].”

Head coach Courtney Kupets Carter also commended Lukacs’ leadership and ability to inspire her teammates, particularly the underclassmen, despite still being one herself. “Last week was tough, but Rachael made a shoutout for our freshmen,” Kupets Carter said. “She recognized that they stepped into a role that’s difficult and how to see freshmen do that is very exciting. That really energized the team.”

Lukacs herself had high praise for her freshman teammates. “[They’re] spectacular! Coming in freshman year, it’s always iffy. You don’t know the scenarios or the atmosphere you’re stepping into,” she said. “[They] have done an amazing job with that, attacking and not holding back. It’s exactly what we need.”

Just two meets into the season, Georgia has already demonstrated its mental toughness and indomitable team spirit. Lukacs is confident that the Gymdogs have what it takes to accomplish big things in 2020. “I know this team is very aggressive. We’re coming in hot and we’re ready for this season!”