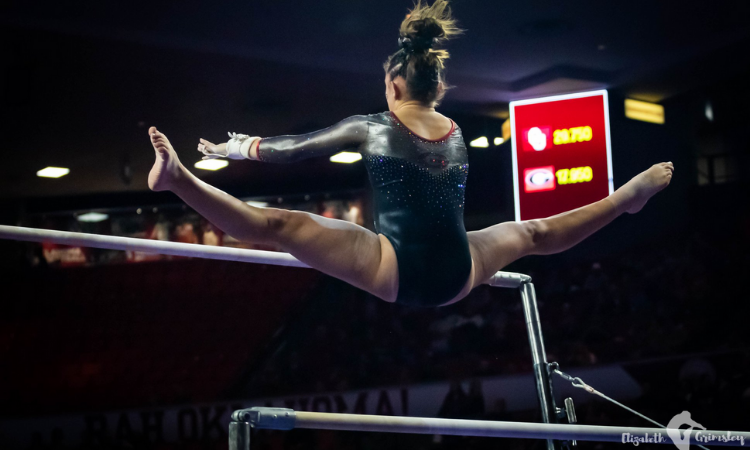 Hello from the always-exciting Stegeman Coliseum in Athens, Georgia! While most of the country is gearing up for the Death Valley Tigers Championship, college gym fans are getting amped up for the 2020 Battle of the Jay Clark Recruits. Both teams got off to a rough start, failing to crack 196.000. LSU struggled with multiple falls on bars and beam while Georgia dealt with Rachel Dickson’s season-ending Achilles injury and Sabrina Vega limited to bars and beam due to the flu. Combine those disappointments with an already-charged SEC rivalry, and you can expect both teams to be sharper—or at the very least, more intense—this week.

The meet will kick off at 7:30 p.m. ET. It’ll stream live on SECN (if you need help figuring out how to tune in, CGN’s got you covered) with scores available here.

Very… Eclectic mix of music in Stegeman while we wait. We’ve gone from Contemporary Christian to Cardi B to the national anthem. If that doesn’t capture the essence of college gymnastics, I don’t know what does.

We’ve got a smoke machine, cheerleaders, dance team, fancy intro video and pyrotechnics. You can’t say the Gym Dogs don’t know how to put on a show!

Unsurprisingly, lineups on both sides look pretty freshman-heavy. Lukacs, Vega (!), Edney and Johnson are slotted to do all around tonight.

Bless D-D, she always delivers. She’s got black skinny legged pants with what looks like tiger stripes down the side.

Cashman (UGA): A serviceable Yurchenko full to start. Not a ton of height or distance, but decent form and just a small hop back. 9.800

Johnson (LSU): Some form on Shaposh and rushes through the bail. Good DLO with just a little hop. 9.800

Rivers (LSU): Nice handstands. Again, some form on Shaposh. Nearly goes over on her handstand, but pulls it back. Pretty Tkatchev and a good DLO with another small hop.

Durante (LSU): Fabulous blind change to straddled Jaeger. Leg separation on the Pak and a close catch. Almost goes over on an aggressive handstand, but saves it. Very nice stuck FTDT. 9.850

Vega (UGA): Her usual fabulous Yurchenko full with the mandatory small hop back. 9.850

Shchennikova (LSU): Completely botches her Shaposh and does a front tuck to her butt… Don’t know how she pulled that out safely. Crowd is cheering on as she remounts. Makes the Shaposh this time with lots of form. Also lots of form on Tkatchev and Pak. Messy DLO with a hop. Glad she’s safe, but seriously, she needs to take more time to recover. This is not safe. Apparently she’s not getting a score because she took longer than 30 seconds to remount?

Lukacs (UGA): Super fast-twisting Yurchenko double with a near stick. Some minor form in the air, but that was a great vault. 9.900

Harrold (LSU): Way over on the handstand from the Zuchold, like basically goes into a planche. Close catch on straddled Jaeger. Large forward step on the double front dismount. 9.725

All right, I think we can officially be concerned for LSU bars. Durante was the clear standout, with Johnson close behind. Georgia looked pretty good on vault. Obviously, not the start values we were predicting in preseason, but they’re looking really powerful and nice in the air (though they’d definitely benefit from a few more stuck landings).

Lukacs (UGA): Just barely gets her Tkatchev around. She’s going for the handstands. Pak is much better than in warm-ups. Decent DLO in the air with a small hop back. She’ll be happy with that one. 9.700

Rau (LSU): Yurchenko one and a half with a big sidestep on the landing. Not a ton of height. 9.775

Harrold (LSU): Really nice Yurchenko one and a half, better form than last week. A little step that felt more nerves than anything. 9.875

Edwards (LSU): A little bit of soft legs in the air, but had plenty of height to land upright. Just a small step. 9.875

Johnson (LSU): Another fantastic Yurchenko double from her. A shuffle on the landing, but not much else to take. 9.925

Vega (UGA): Saves her first handstand after nearly going over. Ugh, face plants on the Geinger; she seems okay. Major leg sep on the Pak, does a hip circle and comes off. Beautiful final handstand and decent FTDT with a step. 8.500

Edney (LSU): Excellent Yurchenko one and a half, very minor hop. 9.875

Oakley (UGA): Beautiful first handstand and blind change. Really high piked Jaeger, and she can’t get her hands around the bar. Lovely Pak, Pulls a Tessen and holds her handstand for approximately 10 seconds. Lovely FTDT dismount with a tiny hop. Shame about the fall, because everything else was lovely. 9050

Really nice vault rotation for LSU. They’ve got the difficulty buffer, but they’re also performing the vaults really well. Landings especially looked more controlled compared to last week. Bars was a struggle for Georgia. Even without having to count a fall, things were a little too 9.7ish for comfort.

The scoring seems surprisingly not obscenely cracky so far. Not that there haven’t been some loose scores, but nothing completely outrageous.

Magee (UGA): Pretty straddle jump to straddle half, great amplitude. Bhs bhs loso, barely keeps it on the beam and has to check. Very nice round off one and a half dismount with the tiniest hop forward. 9.700

Harrold (LSU): Love Georgia fans screaming, “HEY RUBYYYY!” FHS to double twist, her usual legs and a slight stutter on the landing. Double pike, very nice. Couldn’t see the leaps from my seat, sorry! One and a half to front lay landed in a deeep lunge. 9.700

Lukacs (UGA): Love her round-off mount. Solid front toss. Bhs loso, some soft legs but nary a waiver. Back tuck to straddle quarter, fantastic. Big ol’ stuck double tuck dismount, and she’s PUMPED (she should be). 9.825

De Jong (UGA): Textbook switch split to split. Front aerial to beat, perfect. Bhs loso, excellent. Straddle half, nice amplitude. Bit of a pause before her side aerial to stuck-ish full dismount. Gorgeous routine from her. 9.875

Campbell (LSU): Good two and a half to start. I’m still not used to her as a brunette. One and a half to another front lay skidded out of (she stayed in bounds, though). Beautiful leap series, especially her Popa. Double tuck almost to her knees, and she has to take a huge lunge forward. I love Reagan, but 9.750 is way too high

Baumann (UGA): Side aerial to loso, rock solid. Straddle quarter, great. Almost stuck one and a half. Excellent routine. I can’t stress how much more poised and polished she looks this year. 9.875

Vega (UGA): Floaty switch split mount. Switch split to ring, lovely. Front aerial to split, great. Moonwalk. Bhs loso, solid. I like how she kicks out of her full turn. Side aerial to full with a barely there scoot. 9.900

Johnson (LSU): Huge half in half out (bummer, Jay stayed on his feet). One and a half to front lay, excellent. Switch split full to Popa, really dynamic. BIG (and stuck) double pike to close. Killed it again. 9.925

Solid beam rotation for the Gym Dogs, and arguably where they have the most depth. Expect this to continue to be a great event for them this season. Meanwhile, LSU looked really rough on floor. The usual energy and precision just doesn’t seem to be there yet (Johnson aside). I didn’t expect that to be the event where they lost ground.

Dean (LSU): A little over-rotated full turn, but nothing major. Side aerial to loso, major legs and has to come off. Didn’t quite hit the splits. Hip check on front aerial to split. Side aerial to stuck full. Why does no one want to win this meet? 9.250

Perez-Lugones (UGA): So glad to see her back in the lineup (the crowd is going nuts for her). Stumbles out of a big double pike to open. Front full to front lay, floaty. This choreo is dripping with sass. Straddle series to wolf, really dynamic. Slightly underrotated double tuck, has to step forward. 9.700

Rivers (LSU): Bhs loso, tiniest check but covers it well. Tour jete, good. Split to split half, doesn’t quite hit 180. Cat leap to side aerial with some form, but rock solid. Sticks her gainer pike and gets mobbed by the team. 9.950… Okay, there’s the SEC scoring I was expecting.

Magee (UGA): Wow, excellent piked full-in to open. Tour jete half to straddle, fantastic. One and a half to lay to stag, so precise. Nice double pike to close. Excellent routine. 9.825 seems low compared to the previous rotation.

Baumann (UGA): 2.75 wolf turn to open. Powerful one and a half to full. L turn to full en dedans, nice. This music and choreo really works for her, and she sells it well. Rocks her double pike back on her heels and slides, but nothing major. Ring to switch split to close, fantastic. 9.875

Johnson (LSU): Slight check on her full. Bhs loso with a hip check, but stays on. Front tuck, excellent. Cool shoulder stand. Switch split to switch half, well done. Big arm wave after front aerial. Double full with a slide back, but she gets the stick crown anyway! 9.875 is also too high.

Hawthorne (UGA): Mega high double pike. Tim Daggett would be yelling about scraping her off the ceiling. Switch full, very nice. Seemed to get hung up on split full. Front lay to Rudi to split, fabulous. Shushunova, yay! Excellent double tuck to close, and it’s deafening in here. 9.950

Campbell (LSU): Her usual perfect bhs loso. Front aerial to Sissone, very nice. Switch split to switch half (and the crowd went nuts in the middle of it, so props to her).  Double full with some legs but a stick to close. 9.975

Lukacs (UGA): Powerful double lay to open. One and a half to front full to Shushunova, one of my favorite passes. Popa to wolf, great. Massive double pike to close. If Hawthorne went 9.950, I’m fully expecting higher than that. 9.950

Edney (LSU): Front aerial to split, a touch shy. Bhs loso with a slight hip check. Small wobble after her straddle quarter. Great front toss as always. Nobody does it like her. Fabulous stuck one and a half dismount. 9.925

Vega (UGA): The judges have finished their bottle of Moscato, and are in full-on crack mode. If she puts everything to her feet, we could see a 10! Big double pike to open. Nobody sells a floor routine like Vega. Front full to floaty lay to split, perfect. Great double tuck to finish, cheated the lunge just a bit. Fabulous routine. 9.950, I’m honestly shocked. Not because that’s too low, but because that seemed to be the direction the scores were headed…

So LSU takes it! Genuinely great last rotation from both teams. I’m going to do interviews and will wrap up soon!