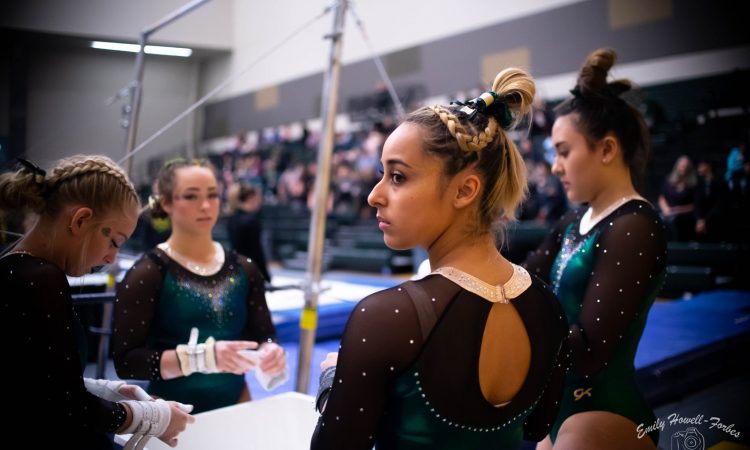 Yes, I’m live blogging this for myself and my own feelings and no other reason. What? Leave me alone.

SEMO is in Alaska for the long weekend, and with an opening weekend score over 191, it is likely a favorite. The Seawolves have dealt with some preseason injuries, including freshman Joanna Chambers, who was expected to be a star but will miss the season due to an ankle injury. That said, a rock-solid group of upperclassmen are rallying and have even more program records within reach. Keep an eye on Louisa-Marie Knapp, who has fought back from an injury odyssey that defies belief and has a chance to crack the bars lineup today for the first time since March 2017.

SEMO has injuries of its own, with Mackenzie Slee and UIC transfer Ashley Albrecht absent from its first meet and December intrasquads. That said, the freshman class looks magnificent, and the long trip to Anchorage is a great test for the young team. The fight between Anna Kaziska and Sophia Hyderally for the beam and floor titles will be fascinating.

Eau Claire is one of the most mysterious Division III teams, and I’m excited to get a look at it. Most of the UW-EC gymnasts I knew graduated in 2019, but the freshman class is massive and intriguing, so it’ll be fun to see what this team can do in a Division I scoring environment. At the very least, the Alaska winter shouldn’t be a great shock for these cold weather veterans!

It’s unclear to me how much non-Alaska we’ll get on this feed and exactly how many healthy gymnasts Alaska has but I saw some really interesting warm up content including a potential 10.0 start, eyes emoji.

Alonso (UAA): Yurchenko pike, small step back. She hasn’t vaulted in AGES so she should be proud of that! My knowledge of her vaulting is honestly mostly based on a TikTok in which she messed up her round off and launched butt first into the table. 9.325

EDIT: If you want to see that TikTok it’s here.

Robinson (UAA): College debut for the Jamaican elite! Yurchenko layout, on the open side, hop back. She’s done a full before. 9.425

Fox (UAA): Yurchenko arabian, softer knees than her usual. She’s been working a tuck one and a half and it’s crept into her half but still a strong vault. 9.625

Knapp (UAA): Her vaulting is the most shocking, ridiculous, improbable fever dream and she freaking HIT. Unbelievable. 9.375!

Kaziska (SEMO) Tkachev I think, nice bail, blind full double back pinged off just a touch with a step. Nice and clean! 9.65

Hillegonds (UWEC): Pretty turning leap combo, side aerial back full with chest down and a cross step. 8.9

Solorzano-Caruso (SEMO): Ray huge, bail with a bit of split leg, toe shoot. Has to muscle up a touch, blind full double back secure. WOW. 9.65

Both DI teams got their fear events out of the way and can build a lot from here. UWEC put up a very young beam lineup and showed a lot of promise at the end. I loved the Blugolds’ creative acro series!

Knapp (UAA): This is her event. Toe to Gienger a little close but hit. Pak to switch kip close again, she’s NERVOUS but fighting. Blind full, FOUGHT, double back with a hop in place.

It’s so hard for her to control landings with one knee not pulling its weight and that landing was really, really strong. She can be a lot better than 9.575 but that’s still a career high!

Fox (UAA): Couple of random giants… Deltchev, that’s new, a touch too far and fell. Blind full to bail really clean. Double lay with a step back. She’s got a great deal of mental game, she’ll have it next time.

Brown (UAA): Clear hip to bail is a beauty, blind to Markelov yes! Blind full double back, fights for the stick but has to hop to salute. WHAT a day for the freshman.

Alonso (UAA): Toe to bail, great, toe blind to Jaeger a touch wonky but catches it. Empty swing before she can cast back, half turn into double back. Fighting!

Keep catching snippets of SEMO’s Jordan Jones, who is a freshman and has beautiful technique.

Just a timer dismount for UAA’s Decious in the exhibition but she did a beautiful routine until then.

UWEC floor music is the best. So much drama. They’re ambitious.

Thome (UWEC): RO double back to hands and knees again. The Blugolds are not rotating enough passes. Switch switch full, front full to a vague attempt at a punch front that was more of a dive roll, Rudi a little underrotated but hit

I only know any of that due to the camera helpfully focusing on the arena scoreboard for a second.

Alonso (UAA): Cat leap switch ring NAILED. She has some of the most valid rings in NCAA. BHS LOSO BHS off, I thought she had it. Full turn, aggressive, I love her knee turn choreography, gainer front full dismount with a side step. Nice work! 9.125

Desch (SEMO): Double pike, step forward. Double back strong. Tour jete half split half, one and a half front lay. Really good one!

Nelson (UAA): Illusion turn, grabs the beam and falls. Risky skill at the best of times. Cat leap front aerial BHS smooth and beautiful. Switch split, her presentation is great, BHS gainer full and runs back out of it a bit. 8.95

Adams (SEMO): Double back, lands on hands and feet and rolls forward. Switch ring switch half missed position. Front full front pike feels chaotic but she gets though it.

Robinson (UAA): Straddle 1/2 short to beat jump, one and a half dismount stuck! Love that we got half each of the last two routines, makes it really easy to understand what happened. 9.225

Maxwell (SEMO): Switch side to Popa is rock solid. That’s all we get on that. 9.1

Hyderally (UAA): Off on her new front to back series 🙁 Liukin with an arm swing to stabilize. Penche at the end of the beam is iconic, full turn, gainer pike really good. 9.275

Solorzano-Caruso (SEMO): Really fascinated by this kid. Double pike, front full front lay and almost sticks it. Switch side Popa split full I think, ambiguous positions. Rudi, comes up short of her landing mat but gets it anyway. Really good one!

Kaziska (UAA): Front double full, jumps forward a bit, leaps glorious as always. One and a half front lay, shape issue on the lay but lands it, clean Rudi. 9.75

UWEC put together a pretty decent vault rotation. Not a great rotation for either SEMO or Alaska on events that are usually strong, but it’s January. Alaska might squeak over 190, which is a victory in itself.

Decious (UAA): Music played before she was ready and she looks so tickled. Oh, this is creepy and awesome. Great Rudi. Switch to wolf 3/2, front lay front double full I think. Sneaky. If this isn’t zombie themed I’ll be bummed because it feels zombie themed. One and a half front lay a touch underrotated but works it out. 9.65

Alonso (UAA): Oh we got a dancer over here. Double pike, a little funky but hops to lunge well, this is so intense. Gracie Kramer vibes. Was that a Ferrari to sissone? I’m just throwing leap names out wildly at this point. One and a half front lay, well done, the faces are immense. Switch side to Popa.  9.5 and her career all around debut!!

Brown (UAA): Why is the music starting wrong for every Seawolf?? I admire her highlighter a great deal. Double back, lunge just a touch long but secure, strong leaps. One and a half front lay really good. Really strong choreography on this one too. Rudi with a little shuffle back. 9.775 What a freaking day from this freshman.

Hyderally (UAA): Lands twisting a bit on her front double full, all the SEMO girls are watching her. Rudi back tuck. all right, front full? front lay. This routine is even better than last year’s in terms of dance, I think. I love it. 9.675

Fox (UAA): Front lay to Rudi is rocking, this routine is very different to the others and I love her presence. It sounds Spanish and kind of flirty and it’s working for her. It’s past 1am and I’m not going to bother identifying leaps any more but she did them well. Great double pike. 9.825!

Looks like the Seawolves are done here with five floor routines.

How far Alaska has come. It’s been four years since the Seawolves have cracked 190 in an opening meet. This time last year, I was talking about how it was a big deal for Alaska to beat ANY other Division I team. This team counted a floor routine with a timer pass in it repeatedly and I didn’t bat an eye. The Seawolves have a lot of fight ahead of them to get through this season and continue improving with limited depth and some injury concerns, but this meet gave me a lot of perspective on their journey.

SEMO is back under 190 but it’s common for road teams to struggle at Alaska, so I wouldn’t sweat it. The travel weekend to Anchorage is really brutal for teams that are used to short distances. Solorzano-Caruso and Kaziska killed it once again, and it was great to see Jordan Jones shining on bars and beam. Last week’s 191 was absolutely not a fluke.

Eau Claire had lots of falls today, but all but one of its event-leading scores came from underclassmen. Lots to come from the Blugolds!