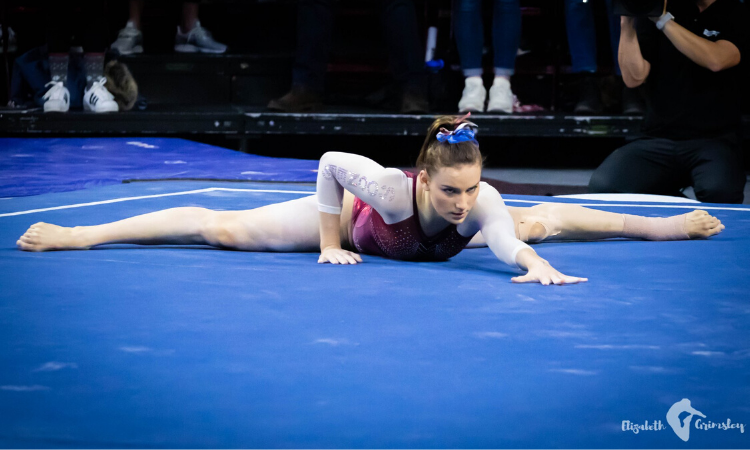 Opening weekend was a bit of a disappointment for many teams, but No. 1 Oklahoma and No. 14 Arizona State had two of the better results. Oklahoma took care of business at the Collegiate Challenge, not counting a single score under 9.775 en route to its No. 1 overall ranking. Arizona State surprisingly finished in second place in the earlier session of the same event, edging out an Auburn squad that is expected to contend for a place in the evening session at SECs this year. There was room for improvement, but it was an encouraging start to the season for a team that is expecting a lot from a large freshman class.

Today’s matchup sees Oklahoma visiting Tempe for the first time since 2013, and both teams will be looking to continue the momentum from the first week of competition. One thing to keep an eye on is the possible return of injured stars—Cairo Leonard-Baker for ASU, who was out last week for precautionary measures, and Olivia Trautman for OU, who was injured before the team intrasquad in December. Trautman was seen tumbling in her Instagram story this week, so there’s reason to believe she may be returning to competition in some capacity today.

Another storyline to keep an eye on is the freshmen. OU’s Ragan Smith competed in the all around last week, posting two scores of 9.9 or higher. It’ll be interesting to see if she remains in the all around tonight if Trautman returns. Similarly, ASU had contributions from five freshmen in Anaheim, including two all around performers in Juliette Boyer and Hannah Scharf. There were some ups and downs from the freshmen, so I’ll be watching to see their continued development as they adjust to NCAA.

A live stream is available via ESPN2; live stats are available here.

30 minutes out and no lineup info yet, but here’s a reminder that ASU is raising awareness for Cystic Fibrosis at today’s meet!

“Tentative” lineups from OU don’t include Trautman, unfortunately, and Ragan Smith has been moved out of the vault lineup:

Ginn VT: Y-full with good distance but some pike down, step back. 9.775

Boyer VT: Another Y-full with a deep squat on the landing and a lunge back to avoid the fall. 9.65

Scharf VT: Huge y-full, beautiful in the air, lots of distance. Step back on the landing. She has a ton of potential. 9.8

Smith UB: Gorgeous Tkatchev, handstands are good. Some leg separation on DLO with a slight hop back. 9.925

Reeves VT: Downgraded to a Y-full, leg separation on the lock and some pike down with a step back. 9.8

Wilson VT: Nice Y-full but a little crooked. Hop back. 9.775 but the scores page shows Wilson twice so not 100% on that.

This was just the start OU wanted, hence they elected not to put up a 6th performer on bars. I expect we’ll be seeing a lot of that early in the season from them. ASU was slightly down from its 48.9 a week ago so they won’t be thrilled with that, but no major issues.

Ginn UB: Some flexe feet on Tkatchev and a little out of control on the transitions. Last handstand is very short. Stuck DLO. 9.775

Stern VT: Y-1.5 is gorgeous in the air and almost stuck but she had a little too much momentum and had to hop forward. 9.9

Degouveia VT: Wow, she gets SO much distance and overpowers it a bit. Large step forward and she doesn’t look happy with it. 9.875

Webb VT: Bridget just cursed her by saying that she stuck every single vault in warmup. Underrotated and had to take a large step back. 9.8

Wilson UB: First handstand a little shirt. Blind change to piked Jaeger is nice. Bail handstand is right on. Last handstand looked good. Blind full into a double tuck with some flexed feet and a step back. 9.775

Nichols VT: Wow, beautiful 1.5. It looked to me like she was leaning a bit forward on the salute but she did manage to stick it. 9.95

Reeves UB: She has a huge straddled Jaeger. Bail handstand looks good. DLO with a large step back. 9.775

Schoepfer VT: Tucked Y-1.5 and it looked like the impact stung her a bit so she took an awkward step back. 9.725

Leonard-Baker UB: Slight ankle injury so this is her only event tonight. Good shaposh but she hits the high bar on her toe hecht later in the routine. No fall but she has to regain her momentum. FTDT is nice but she won’t be happy with that routine. 9.55

OU is cruising but still had some unusual early-season mistakes in that rotation. ASU had a good bars rotation overall with a 48.9 with some really great routines from the freshmen, compared to the 48.525 a week ago.

Thompson BB: BHS BHS LOSO with an AMAZING save after her foot slipped. Good leaps. Side aerial back full, stuck. 9.7 later upgraded to 9.75

Boyer BB: BHS LOSO with a slight balance check. Front aerial with another balance check, misses connection to beat jump. Split leap split leap, maybe a little short of horizontal. Side aerial to back full dismount with a step back. 9.75

Smith FX: Double tuck to open, gorgeous.  Back 1.5 to front full (?) with a lunge forward. Her leaps are beautiful. Double pike to close, great in the air and well controlled landing. Great routine. 9.9

Gutierrez BB: Front walkover with a balance check so she has to repeat it to connect it to the Rulfova, which is very nice. Big balance check after her leap series. RO 1.5, underrotated with a step back. 9.625

Wilson BB: BHS LOSO is nice but legs were a little ragged on the BHS. Cat leap to switch half, maybe a bit short of horizontal. Front toss to beat jump is great. Gainer full with a slight hop. 9.8

Stern FX: Double pike is nice but she takes an extra step on the landing. Front layout to front full, great. Leap series is good. Double tuck with a low landing to finish. 9.725

Scharf BB: Oh no, opens with a double wolf turn but lost it on the second revolution and has to put her hand down. BHS LOSO is very nice. Side somi is good. Cat leap to a short switch half and she comes right off after her foot slips. Long pause before dismount, RO 1.5 is nice with a step forward. 8.8

Reeves BB: Pressure on Reeves after the fall. BHS BHS and she comes off before getting to try the LOSO. Does a BHS LOSO instead of the triple series to make up for it. Leaps are definitely short but she stays on. Front aerial with big balance check. RO 1.5 to close. 8.6, which is lower than Scharf’s two-fall score–could there have been an issue with core requirements?

Nichols FX: Back 1.5 stepout through to a double back to open, very nice. Her back 1.5 to front layout stepout is gorgeous. Double pike to close is great, maybe some flexed feet in the air. 9.925

That was a nightmare end of the rotation for ASU, resulting in them having to count an 8.8 on the way to a 47.725 rotation score. Meanwhile, OU continues to cruise, though there are some small issues that need to be fixed.

Thomas BB: Side somi, does a good job masking the balance check. BHS LOSO, very clean. Split leap split leap straddle 1/4 is great. Side aerial to back full is great, some leg separation on the landing but I don’t think it’s enough for a deduction and she sticks it. Great start to the rotation. 9.875

Thompson FX: Double pike to open with a bit of a squatty landing but well-controlled. Rudi is very nice for the second pass. Back 1.5 to front layout to close, maybe some leg separation on the layout. 9.825

Dunn BB: BHS BHS LOSO is right on. Leaps are great. Front full dismount with a step forward. Nice routine for the freshman! 9.825

Williams FX: She opens with a back 1.5 but her feet slip out from under her and she falls. Finishes with a double tuck, maybe a little low on the landing. 8.95

Woodard BB: Side aerial BHS is right on. Front toss to beat jump, fantastic. Leaps have great extension. Nice scale. Side aerial to back full, stuck. 9.925

Reeves FX: Opens with a 2.5, a little underrotated and has to take a side step. Whip half to front full, well controlled. She does a cool back spin. Her leap positions are a little iffy but it was a little hard to tell because the camera was zoomed in too far. Closes with a Rudi, a little piked but landed well. 9.775

Webb BB: A little uncontrolled coming out of the full turn but she covers it well. BHS LOSO with a balance check. Front aerial to split leap is nice. Leap series is good. Side aerial to back full, stuck. 9.9

Boyer FX: Front layout to Rudi to open is beautiful. Double pike is underrotated, chest is way down and she has to take a lunge forward. Closes with a back 1.5 to front layout, her lunge forward was a bit uncontrolled but not sure if they’ll deduct for that. Bridget thinks she should upgrade her opening pass to a double. 9.825

Smith BB: BHS LOSO with a balance check. Front aerial to split jump is very nice. Beat jump to straddle half to BHS swingdown is gorgeous. BHS to gainer full dismount is stuck.  9.875 and John thinks it should’ve been higher because of score building.

Scharf FX: Front tuck through to a double back is great. Front full into a front tuck second pass. Leaps are nice. Double pike to close. Great to see such a nice rebound from her beam disaster. 9.825

Nichols BB: Front aerial BHS LOSO is right on. Switch leap to split jump with a slight hesitation in between but I think they’ll give it to her. RO 1.5 dismount, sticks it of course. 9.975 so one judge gave her a 10

Ginn FX: Front tuck through to double tuck, her lunge backwards is a little uncontrolled but she avoids taking more steps. Front layout to front layout half is great. Double pike is great to finish. 9.9

OU was in cruise control this entire meet and never let up on the gas with no major mistakes and no scores under 9.725. Maggie was her usual amazing self with a 39.750 AA and I don’t even think that was cracky. With this score (the highest in the nation so far this season) they will remain in #1 at the end of the weekend barring any 198.4-ish scores from Denver or UCLA tomorrow. It says a lot that OU is still getting these scores with one of their stars out with a broken heel.

ASU had three solid rotations and one disastrous one in beam, but their total was only .075 less than last week so they can take comfort in that. The freshmen continue to gain experience, accounting for 13 of the 24 routines by my count with star junior Cairo-Leonard Baker only performing bars. The future is bright for the Sun Devils.