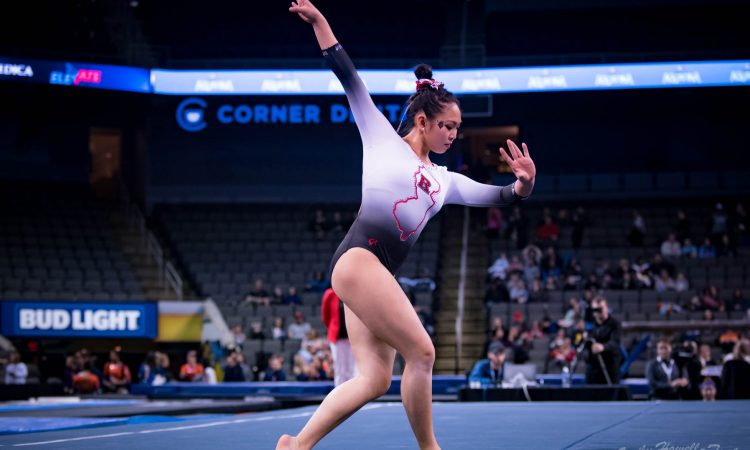 This is the most exciting meet of the weekend to me. I’m so amped!

Western Michigan and Arizona both had absolutely fabulous opening weekends, hinting at capability far beyond what they have shown in recent years. Either could sneak this meet over favorite Iowa State, and even if not, the performances of impact specialists like Christina Berg and Amelia Mohler will keep us watching.

Iowa State has a great deal of raw material this year, with 10 newcomers including five internationals. Front triple twist queen Andrea Maldonado will likely be making her college debut this weekend and could bring in big scores alongside Aussie Jade Vella-Wright, Brit Laura (called Flossie, if you’re into that sort of thing) Cooke and Canadian Loulou Vezina. Sydney Converse also looks geared up for an impactful senior season.

Rutgers had the lowest lows and the highest highs in 2019, so what we’re looking for this season is stability. Head coach Umme Salim-Beasley’s first recruiting class in New Brunswick is talented and deep, and lineups are among the most mysterious of all of Division I. Rutgers can do a lot this year, and proving it can put up a fight against the other three teams in its meet would be a very positive indication.

March ins started SIGNIFICANTLY before the hour in Tucson, which I’m thrilled about. Timeliness is appreciated in these non-network meets that can drag on for so long.

Oh no, this looks like one of those meets where you have to look at the school logo whenever the home team isn’t competing. So frustrating.

Swanson (Arizona): FTY noticeably higher than the others. 9.75

Davis (Arizona): FTY clean in the air and very strong landing but not much distance. 9.8

Leydin (Arizona): Big FTY, leg split and big bounce back but lots of amplitude. She can definitely get her one and a half back. 9.75

Hargrove (Arizona): Big with a big hop back, cleaner form than Leydin. 9.775

Libby Orman has the scariest Yurchenko block I’ve ever seen. She usually tries a Yurchenko arabian, but today her head almost touched the table and she mercifully bailed to a Yurchenko tuck. Arizona, no more of that please. That’s a strip it back to basics and try again next year type of vault.

Doherty-Herwitz (RU): Front aerial side aerial on the slow side but clean. Switch switch, a little shy on splits, full turn, beat jump. Cut away for an Arizona team chant, YAY.

Palacios (ISU): Double pike, well done, front lay front full RIGHT into the corner with a little tiny hop to one side and avoids an OOB. Tour jete half split full, I appreciate her dance ability a lot. Illusion turn, Rudi with chest down.

Joyner (RU): Full turn, if they cut away now I’ll kill them. BHS LOSO a beauty, switch switch half SO good, aggressive splits. Side aerial back full.

Converse (ISU): Double arabian, great, one and a half through double full, really impressive. Great performance quality! Tour jete half Popa, two and a half twist around but she looks a bit surprised by the landing.

Pretty close! That’s a really strong vault rotation for Arizona, which struggles on this event regularly. Joyner could have a strong case for conference freshman of the week if she keeps this up.

Converse (ISU): Great Yurchenko full in the lead off, little hop back. 9.85

Binstock (WMU): Switch half to wolf, one and a half twist with a small hop. 9.5

Maxwell (ISU): Really closed shoulders on the table, low and piked FTY with a big step back. 9.45

Hendrickson (Arizona): Blind change, stalls for a second, Jaeger to overshoot is fine. Double lay very slightly overrotated with a step back. 9.725

Brovedani (Arizona): Blind to pike Jaeger, lovely, toe on to Pak very airy. double layout clean and fights to stick even though she’s a touch short. Hops in the end but still a strong routine. 9.875

Berg (Arizona): Blind change pike Jaeger to overshoot, FTDB dismount with a little hop back. I can’t tell anything about handstands from here but nothing was badly off, anyway.

Carles? (WMU): Hitch kick side aerial with an arm swing, BHS LOSO knees gave a bit on the landing, which is odd, but works through it. Split split 3/4 just a little short of splits, one and a half dismount with a cross step.

Duffield (RU): Whip double pike, step back. Double back looks like it’s going way OOB but she pulls it in and hops forward to keep it in. 9.75

Farrell in the exhibition for Rutgers shuffled out of bound on a punch front. Apparently this is a Hamilton routine.

Rutgers really is holding pace with the top two teams, which is so impressive. Arizona is having a clean day and showing again that it can push close to 196.

Davis (Arizona): Beautiful back flexibility on her mount, BHS BHS LOSO using the last inch of the beam but landed well. Lovely leaps, really aggressive straddle, full turn, one and a half twist. 9.825

Palacios? (ISU): Blind Jaeger great, over on a handstand, stays on and casts out. Bail a little funky, double layout with some form but stuck. 9.8

Leung (Arizona): BHS LOSO, a little off line and pops one hip out to hold it. Pretty leaps, full turn, switch half a little short. Cat leap side aerial back full aaaalmost stuck.

Brovedani (Arizona): Russian lever!! Beat jump sissone, front aerial back tuck. Switch half split, one and a half twist with a big step forward. 9.825

We keep getting fragments of other routines but not more than a few skills at a time.

This is a GOOD freaking beam rotation from Arizona. The event where they’ve improved most from last year to me, there’s just an energy here that there wasn’t before.

Harrison (WMU): Joining partway after my stream lost video for a few seconds to see a really nice double pike.

Took a ridiculous amount of time for the judges to score that.

Tishkoff (WMU): Double pike clean. One and a half front lay, switch side Popa. Good finish after a long, long wait.

Not WMU’s day at all, but vault to go. Rutgers got through a weakness on vault and is still looking ready to put up a strong score. Cracking 194 in a season opener would be a big deal. Iowa State has some shockingly beautiful beam and Arizona could crack 196!

Cowles (Arizona): Double tuck, step forward but not a serious rotation issue. Difficult leaps, lots of energy. Two and a half twist with a scoot forward.

Davis (Arizona): Front double twist, Rudi with a scoot back. Tour jete half Popa. One and a half front layout.

Sorry, I keep missing passes because I’m desperately trying to identify who I saw from ISU on beam earlier and I honestly have no idea. She had bangs and no one has bangs in their roster photo!! I think it’s Phoebe Turner? Sorry if not.

Saw some nice leaps for Converse on beam and a great bar dismount from Joyner.

Berg (Arizona): Front double twist, a little off axis but well done. switch to split full wolf full. One and a half front pike is great, Rudi to split and hops with a half turn for some reason.

Arizona squeaking in JUST below the 196 mark, but so much to be proud of today. Iowa State and Rutgers both with massive opening scores, while Western Michigan slipped a little without the help of Payton Murphy, who was AWOL today.